’The Blues Permeate in Ma Rainey’s Black Bottom’ is now available on Audio, read by author Don Shanahan, exclusively for our Patreon supporters. For just $3 a month you will have access to our full library of Audio content, plus three new uploads every week. To sign up visit our Patreon page: https://www.patreon.com/25YL

Compared to the production levels of auditory tuning found in nearly every genre of today’s music scene, traditional blues might seem overly simple. It runs on that plain AAB pattern where a line is sung over the first four bars, repeated for another four, and wrapped up by a longer line to finish the sung stanza. It’s all more talk than melody as to now when the hook seems to be everything for a catchy song and the lyrics are secondary. That’s the thing, though. The music is secondary here. Blues is about asserting one’s self.

The words are everything and they’re not just trying to string together adorable things that rhyme. To hear or watch blues music in its purest form is to discover and witness intimate woes of a cruel reality dating back to African origins. True blues music permeates with solemn diction, romantic lamentation, and cathartic constitution. It is the Black experience of America expressed with every range of emotion fit for poetic song. That speaks more than bubblegum pop all day and twice on Sundays.

The narrative scope of playwright August Wilson’s Ma Rainey’s Black Bottom is a setting of Black performers sharing their collective experiences in life that now go into their music. There is a precarious pendulum of friendly diatribes and combative challenges between the traveling band members of the titular “Mother of the Blues.” Their forum may be a lowly basement rehearsal room, but the expanse of their descriptive histories reaches generations farther than mere geography.

George C. Wolfe’s Netflix film, scripted by actor Ruben Santiago-Hudson and born of the Tony-winning play from the creator of Fences, takes place in 1927. It is the peak of the Great Migration of northern urban opportunity and the cultural Harlem Renaissance boom that recognized and first popularized Black art forms before the Great Depression. Despite continuing social marginalization, racial bigotry, and economic hardship, this was a time where success became tangible for that minority. Ma Rainey, played with vehemence by Academy Award winner Viola Davis, has traded barns, tents, and pennies for stages, spotlights, and riches. She and her act arrive at a recording studio in a sweaty Chicago to put some of her hits on vinyl and collect a handsome cash fee to do so.

Even upon her tardy arrival, much to the exasperation of her agent Irvin (Jeremy Shamos) and the paying record producer Mr. Sturdyvant (Jonny Coyne), Ma is not pleased with her working and contract conditions and imposes her celebrity authority. Rainey is the talent and she knows it, with the voice in demand that earns her and other people a great deal of money. A demanding artist makes artistic demands. As a woman of color coming from poverty, she’s going to take her chances and exploit her advantages. The respect paid is the ultimate satisfaction. If the woman wants a bottle of pop, get her a pop. If wants three, get her three and hurry up. She’s calling the shots or that howling moneymaker stays silent and walks out the door to another paying label.

Thanks to her escalated peeves, her instrumental players have plenty of downtime to converse and rehearse. The veteran leader among them is trombone player Cutler (Colman Domingo of If Beale Street Could Talk) and he’s flanked by fellow seniors Slow Drag (Broadway star Michael Potts) on bass and Toledo (TV veteran Glynn Turman) on keys. They’re set in their ways and know exactly what is steady and necessary for that payday. Their resident hotshot and hindrance is the junior trumpeter Levee, played by the late Chadwick Boseman in his final performance. 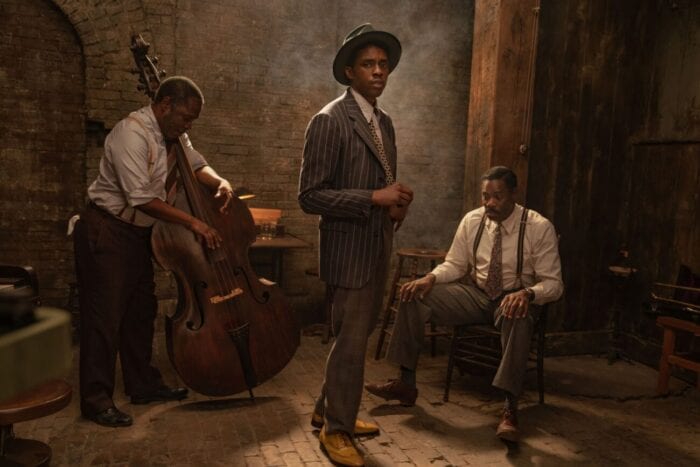 Putting period finery to Wilson’s play, Wolfe’s film, shot fluidly by cinematographer Tobias A. Schliesser (Beauty and the Beast), adorns its subjects with flair. The costume design from the matchless Oscar winner Ann Roth (The English Patient) for Ma Rainey’s Black Bottom is impeccable, as is the thick hair and makeup work from Matiki Anoff (Spider-Man: Far From Home) and Mia Neal (Uncut Gems). You don’t have to do much to Rainey’s original music for its power to come through, but jazz maestro Branford Marsalis, composing his first score in 19 years, fills that curation effort steadily. But again, this isn’t about the music. It surrounds the personalities that provoke the lyrical poetry.

Levee wants to climb his own ladder in the music industry as a songwriter and be his own bandleader collecting checks and bossing people around. Cocky and brash with eyes for Ma’s girlfriend (Taylour Paige of VH1’s Hit the Floor), the loudmouthed youngblood sure won’t stop berating the complacency and perceived feebleness of his older mates. The dueling egos, both musical and personal, enliven conversations where old teach the young and the young challenge the old as continuing generations of sufferers.

The swapped stories of these men in Ma Rainey’s Black Bottom ring with commonality and echoed experiences. Some beget hearty laughter. Others give pause. There is oral tradition covered that evolves and changes with the times, and blues music counts as an cultural outlet. They are also causes of hostility. However, as the day drags on, the debates begin to express visions and stories of violence, oppression, and failures of faith from years ago and unhealed traumas. As the men, especially Levee, articulate their anger and dissatisfaction, cordiality evaporates and nerves are frayed.

It is in these exchanges and verbal bouts that Chadwick Boseman displays a volcanic performance side we have never before. Occupying the same indignation and attitude originated by Charles S. Dutton on Broadway, the elevation from the stage to the screen has only increased the volume of pride and pain in the character. Sauntering, squinting, and pouting with displeasure, Viola Davis also amplifies her maven with juiced intensity all her own. The roles are superlative platforms for their genius. Just as we keep repeating, the music is secondary. Ma Rainey’s Black Bottom and its blues are about asserting one’s self, and golly, does it affirm its authority.