The Phantom Thieves are back to steal my heart again in Persona 5: Strikers!

I haven’t been chummy with the Phantom Thief crew since the release of Persona 5 in 2016.  I simply haven’t had the time to invest in another massive RPG, much less one that I’ve sort of already played through. Thankfully, I don’t have to play Royal, because Strikers is a direct follow-up to the original.

The plot picks up half a year after the resolution of Persona 5. Joker and Morgana return to Tokyo to visit the rest of the game during summer vacation. A barbeque party is quickly planned, but the team is once again pulled into the Metaverse when a local celebrity, Alice Hiiragi, visits Tokyo. They discover that Alice has been dragging people’s shadows into her own twisted world and stealing their desires in order to increase her popularity. So the party gets put on hold, and the gang is back in action! 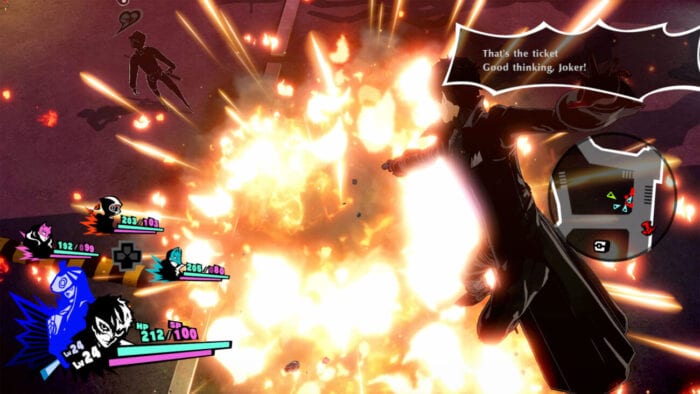 Something can be said right-upfront: A primer on Persona 5 lore this is not. If you’re unfamiliar with the events of the previous game, I don’t recommend jumping into this one cold. There is no exposition, no introduction to the characters or to their history. If you were unfamiliar with events going in, you’ll be completely dumbfounded as to what’s going on.  But if you’re familiar with this gang of thieves, you’ll enjoy your time with them.

And that’s something I can praise about the game so far; Strikers definitely feels like Persona 5. It once again just oozes style with menu changes and transitions, and the soundtrack is a wonderful combo of new tunes and remixes of old ones. But more than that, hanging with the crew again is a joy.  When they meet up in LeBlanc and their other usual hideouts to discuss their next moves, you can feel the kind of camaraderie that only comes from a group that knows each other well and has built up an emotional connection over time.

That bond is carried over into the battles that the Phantom Thieves fight in the Metaverse. This time around, the action is filtered through an action-rpg musou genre, as opposed to a turn-based one.  Characters still have their respective personas, but now battles happen in real-time. Plus, the number of enemies onscreen has multiplied exponentially.

It’s a major change up to the Persona 5 formula, and at first, I was overwhelmed by all the new information. Each character has their own special moves that can be activated by performing different combos with the “square” and “triangle” buttons. On top of that, they have “Master Arts,” which are extra special moves that are generated when in battle. Both of these are on top of each character’s persona’s skills, which can be used as long as there are enough stamina points in the bank.

I’m attempting to adjust to the action of battles and switching between regular attacks and Persona skills (and I’m trying not to button mash). However, SP is drained fairly quickly and restorative items are rare at the outset of the game. Luckily, you can withdraw from the metaverse and return to reality to refill your SP. This comes with the added bonus of time not passing. Yup, that’s right, you can take your time going through the dungeons this time.

There are also no social-links or social activities you can participate in with your friends, but the Velvet Room returns. There is a system in place where you can use gathered Persona points to level up any persona of your choice. And of course, you can fuse them as well.

Oh, I have to mention the new addition to the Phantom Thieves, Sophia. She’s an adorable AI ball of fluff, who has no trouble holding her own in a battle. Her innocence and naivete are extremely charming, and I just love the fact that she attacks with Yo-yos.

Just a few hours in, and I’m already enjoying my return to the Persona 5 universe.  Expect my full review after I beat the whole game.  It looks like it should max out at around 35-45 hours.