The Falcon and the Winter Soldier structures its penultimate episode (S1E5, ‘Truth’) akin to the calm before the storm—the pause for breath to consider and contextualise—as all of our characters attempt to discover their own personal truth.

‘Truth’ is a perfect summation of Malcolm Spellman’s series to date, which has existed in the shadow of not just Marvel entries such as Black Panther but recent exploration of the black experience, and American black trauma, such as Watchmen and Lovecraft Country. It positions itself very much within that lineage of stories furiously expanding upon points made in the public sphere in recent years, such as Black Lives Matter and George Floyd and the toppling of symbols representing historical slavery and oppression in the West. These explorations are catnip to the right wing ‘woke’ decrying crowd but they are important texts to help combat existential privilege now growing entrenched as a consequence.

Sam Wilson’s (Anthony Mackie) return to Isaiah Bradley (Carl Lumbly), who we last saw in ‘The Star-Spangled Man’, serves as the core lynchpin of what might end up the most powerful hour of the series at large. “You think things are different? You think times are different?” he asks Sam, who visits the first unofficial black supersoldier, experimented on with the serum during the Korean War and subsequently locked away and experimented on for three decades. Sam is looking not so much for answers but rather personal certainty as he grapples with the legacy of a shield now tainted after John ‘Captain America’ Walker’s (Wyatt Russell) savage murder of a Flag Smasher at the end of ‘The Whole World Is Watching’ as vengeance after the death of his partner Lemar Hoskins. “They will never let a black man be Captain America. And even if they did, no self-respecting black man would ever wanna be.”

This is central to the entire story The Falcon and the Winter Soldier is telling. Steve Rogers bequeathed the shield to Sam at the end of Avengers: Endgame without considering the legacy of the symbol he was passing down, which is in some ways understandable. He was a man born and who lived out of time, like Bucky Barnes (Sebastian Stan), and who missed the black experience across the latter half of the 20th century that led to the reckoning we are living through today. Rosa Parks, Civil Rights, the Rodney King and LA Riots, all the way through to the litany of black people still dying at the hand of white supremacy today, Steve missed most of it. He gave Sam the shield because he believed in the man. He was guilty of what many who believe ‘All Lives Matter’ or who suggest “I don’t see skin colour” say, often well meaning folk but people who lack the context or the knowledge or the true understanding of the black experience to realise how this plays into the continued subjugation of race.

Isaiah has lost hope that the system—a system that bred and curated John Walker—will change. Walker, ostensibly punished for vicious murder recorded by dozens and spread across the internet by being stripped of his rank and position as Cap, actually gets off the hook. His privilege doesn’t allow him to realise that anyone not a symbol of white power structures, especially a black man, would be locked away for life for what he did. He is defiant in the face of his ‘punishment’. “I lived my life by your mandates! I dedicated my life to your mandates! I only ever did what you asked of me, what you told me to be and trained me to do, and I did it. And I did it well.” This is Walker’s truth, as well as his justification. He cannot separate what are clearly his own personal demons, his own PTSD trauma haunting him from his life as a soldier, from the symbol of being Captain America. He is the personification of American white rage boiling over in the face of systematic indulgence, of being reassured they are the greatest country made up of the greatest people, despite it all being built on existential lies of murder, genocide and slavery.

Walker gets away with a far worse crime than anything Isaiah ever did when he dared to try and exist as a symbol of power. “You think I wouldn’t be dead in a day if you brought me out? You wanna believe jail was my fault because you got that white man’s shield. They were worried my story might get out. So, they erased me. My history. But they’ve been doing that for 500 years.” Here you feel the story of Captain America could go in two directions. Sam has the shield but he does not own it, indeed as Julia Louis-Dreyfus’ burgeoning villain Contessa de Fontaine tells Walker not even the US government do as it’s “a grey area”. Sam works to protect his own history as he encourages his sister Sarah (Adepero Oduye) not to sell their parents’ boat they’ve been working on, and it serves as a key metaphor for his own struggles with the complicated history of what Captain America represents. The Falcon and the Winter Soldier could easily get away with Sam destroying the shield, destroying the symbol, and making Isaiah’s point. Equally, he might transform it. “Isaiah has been to hell and back. If I was in his shoes, I’d feel the exact same way. But what would be the point of all the pain and sacrifice if I wasn’t willing to stand up and keep fightin’?”. 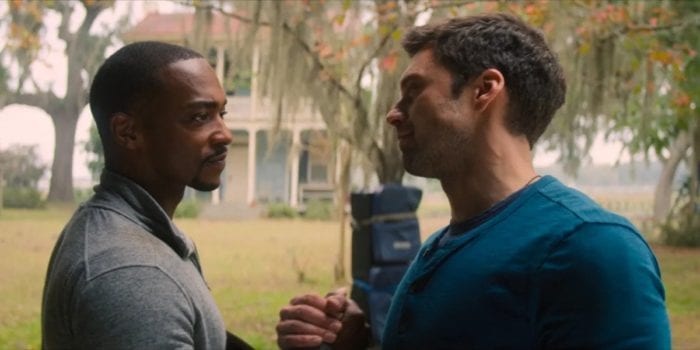 This appears to be the underlying message of The Falcon and the Winter Soldier, the truth of the show, and it applies to the MCU as a whole as a series about the meaning of being a hero in modern terms. Watchmen and Lovecraft Country, and films such as 12 Years a Slave or Antebellum, depict the historical horror of the black journey that Western media have shied away from in the last century, but where are the stories of black empowerment? Where are the transformational pieces not depicting black terror but black power and hope? Black Panther, in combining Afro-Futurism with James Bond swagger, showed what black and African heroic symbols looking to the 21st century could be and if Sam is to adopt the shield, adopt the symbol, and imbue the legacy of the black experience with his own innate dignity and goodness—the parts Steve understood—then when he opens the box at the end, seemingly containing a new Captain America suit to face down the Flag Smashers, then perhaps this is more rewarding. Because the MCU has earned it.

Bucky’s truth is less clean, stained as it is with a trauma and dark legacy even more tainted than Walker’s as Cap. Sam provides him with the home truths he needs about making amends, how it lies in more than just vengeance but supporting those whose lives he has destroyed. The kind of support that Walker, probably falsely, claims he will always be to Lemar’s parents, despite how he is too consumed by pain and anger to do so. Bucky starts down that path by not executing Zemo (Daniel Bruhl) and handing him over to the Wakandans to serve life in prison, and it too feels a development, but Bucky has perhaps been less well serviced as a character between the two leads simply because his arc is more about personal acceptance and growth.

Bucky’s is an insular journey whereas Sam is dealing with external forces, broader legacies and experiences, and this allows for a stronger integration with the overarching narrative as Karli Morgenthau (Erin Kellyman) continues to try and undo the GRC’s ‘Patch Act’ designed to cover over the ‘Blip’s effects and reconstruct the global order. By now, we’re meant to want Karli punished, tipped as he has into a vengeance-driven Machiavelli, while remaining behind to an extent what the Flag Smashers represent. “How many times do we have to pay with our lives just to be citizens of this goddamn planet?!” Karli barks.

She frames the Flag Smashers discord as planetary, almost placing them as aliens in relation to the world at large, but her extremism has now overtaken her own personal truth and injustice. Zemo is not necessarily wrong when he declares “The girl has been radicalized beyond salvation.” This is also The Falcon and the Winter Soldier’s rationale for allowing Karli to initiate a climactic battle which could add to the conflicting aspects inherent in Sam’s choice. By using the shield to protect the GRC from Karli & Batroc’s (Georges St-Pierre) extremism, Sam could end up securing the very power structure that Isaiah warned he could never exist within as Captain America, and that the black experience, the black truth, will always be unjust. It takes extremists even like Bucky, in handing over Zemo, to provide recompense in the manner the very forces who Walker—determined to batter his own rage driven legacy into being—claims enabled him to become Cap, will never do.

“The legacy of that shield is complicated, to say the least” Sam tells Bucky before they take their own paths, at least temporarily. ‘Truth’ provides The Falcon and the Winter Soldier a fork in the road as it distills the central ideas it has explored into one hour. What path it will take as it comes to a close, what truth it will embrace, is as uncertain as where America, and its black history, legacy and experience, itself will end up.

More From: The Falcon and the Winter Soldier