It’s been 22 years since the original Pokémon Snap released on the Nintendo 64. Fans (myself included!) have been asking for a sequel for just as long. New Pokémon Snap is now out for Nintendo Switch, and after a few hours with it, I have some thoughts.

The basic mechanics from the original are the same. Use the control stick (or gyro controls) to move your camera and take photos of the Pokémon in their natural habitats. You can throw food or play a song to entice them to eat, jump and dance in order to get the best photographs possible. One of the new features is Illumina Pokémon, which glow and sparkle once exposed to flowers. You’ll need to take some pics of these to unlock new areas and progress through the game. Illumina Orbs replace pester balls—instead of irritating the Pokémon they make them glow. It’s a cute gimmick and looks nice graphically. This isn’t the best-looking game on the Nintendo Switch by any means but it’s still very pretty. 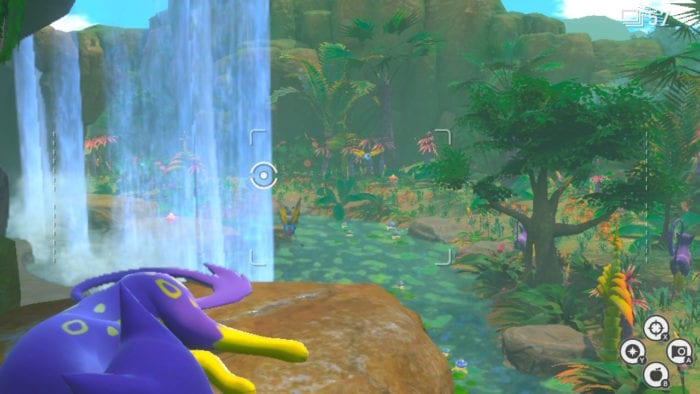 After returning to the lab with your photos, they’ll be graded by the new Professor of this region—Professor Mirror. Grading works on a 1-to-4 star scale, with each star based on what pose or activity the Pokémon is doing. A Bidoof just chilling there will probably be a 1-star, while one eating or jumping will be higher. Each star rating has a rank, from bronze to platinum. So obviously you’ll be attempting to get the best scores possible for each rank.

Thankfully the game has a bit of leeway with this. I had several photos where the Pokémon was behind a bunch of grass or a tree but the camera still detected it and would give me a decent score. If the aiming feels too slow the pointer sensitivity can be adjusted and if gyro isn’t your thing that can be turned off completely.

A minor annoyance is how often you have to redo each stage at the beginning of the game. I suppose this can be put down to easing you into the game’s controls and giving you practice taking photos, but I was quite impatient after playing the first stage (a nature park) several times over. Your points totals will be added up and each stage has a level, with the higher levels giving Pokémon new behaviors. A nice addition is each level has a day and night version, with each sporting different Pokémon.

I was quite surprised that there is voice acting in the game and that you can even choose Japanese or English audio. This feels like a rare occurrence in Pokémon games which are notoriously silent in that aspect. You can also turn the voices off if that’s to your preference.

My favorite part is seeing all of the adorable animations of Pokémon interacting. Playing, snoozing, and fighting each other in their “natural environments” is a joy to witness. I’m a lifelong Pokémon fan so this is the kind of stuff I live for. For a newcomer, I’m not sure how interesting this would be but I could see it making kids want to know more about these critters.

It’s unfortunate that one of the main highlighted features of New Pokémon Snap releases years after the Miiverse bit the dust as I think it would have fit perfectly among that system. You can upload and share your photos as well as edit them to add stickers, effects, and text. Other players can like your photos and you have a little profile where you can show off your favorite photos. It’s a no-brainer of a feature to a game like this. If you want to actually print out your photos, Instax has a printer you can link up to your Nintendo Switch.

One of the things I’m looking forward to is discovering how to find certain Pokémon—as a kid, it was one of the first times I ever wanted to complete a game and find all the secrets. I’ve already spotted one that is a reference to the old game (no spoilers) and hope there will be others.

I’m overall enjoying the game so far, but as with other Pokémon titles of the last few years, I feel like it could do more. Many have complained the last few titles have been light on content and I can’t disagree with this. As I continue we’ll see how far my photography adventures will take me.