Sight unseen, Evil sounds like a standard-issue primetime CBS procedural with a “case of the week” and occasional character development. However, Evil itself is a clever, gripping and frightening premium-caliber program in the skin of something else. It is startlingly good, boasting interesting characters, creative plotting, and rich thematic concepts. What really makes Season 1 of Evil a slam dunk, however, is how it manufactures fear and dread through uncertainty.

Evil, from The Good Wife/The Good Fight‘s Michelle & Robert King, centers on clinical psychologist Dr. Kristen Bouchard (Katja Herbers) and priest-in-training David Acosta (Mike Colter). David has recruited Kristen for her psychological expertise in addressing potential possession cases brought before the Vatican. With David approaching the problem from a spiritual angle, and Kristen from a place of science, they can hopefully identify whether these “possessions” are demonic in nature, a psychological disorder, or rooted in some environmental factor. As David phrases it, “Possession looks a lot like insanity…and I need someone to help distinguish between the two.” 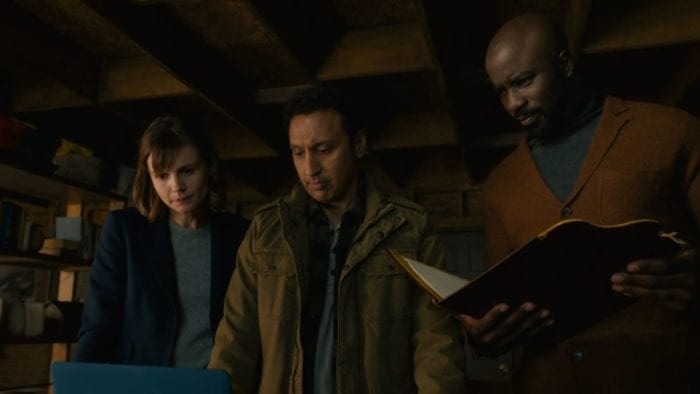 Most of the 13 episodes in Evil’s inaugural season follow a similar format: Kristen and David are notified of a case, and they, with David’s science-y buddy Ben (Aasif Mandvi), attempt to pinpoint the source. That in itself isn’t entirely remarkable, but it’s the foundation of one specific brilliant storytelling technique: it is never immediately obvious what the actual answer is, and if it seems obvious, you’re probably wrong. That, coupled with some frightening spiritual and psychological concepts, sows a sense of helplessness and unease. Sometimes, there isn’t an answer, or the one given doesn’t quite fulfill the expectation for a completely satisfying resolution. Or, you may think you’ve got it figured out until the next plot point yanks the rug out from under you. In those cases, there is a sense of dread knowing that there is still something lurking to interrupt that sense of comfort of a narrative cleanly tied up.

Things start out rather small—a defendant is said to have been possessed when he committed his murders, a claim corroborated by his wife who hears demonic whispering in the kitchen at night. Ben eventually figures out the whispering is merely groaning pipes, and the suspect is left empty-handed for a defense.

But things escalate quickly: as Kristen drifts off to sleep, she’s suddenly visited by George, a demon with mottled black flesh and yellow eyes. The rational-minded Kristen initially challenges George’s tangible existence, and he reacts by zipping over to the window and urinating on the floor: “Tell me…can a night terror do this?” As George slashes downward with a knife, Kristen awakens, shrieking. Glancing into the corner of her bedroom, she sees the liquid pooled below the window where George relieved himself, but observes that the window is open in the midst of a rainstorm. It’s a temporary sense of relief that seems to confirm that Kristen is experiencing sleep paralysis, but later visits from George challenge that theory in increasingly violent and terrifying ways. In the first half of the season, George is a consistent source of fear and uncertainty: the bedroom and dreamland are often a source of solitude and closure for a protagonist; for Kristen, it’s another opportunity for George to terrorize her. No moment or location in Evil feels safe; everything is an inlet for fear.

A significantly more tangible source of trouble for the gang comes from Leland (Michael Emerson), another clinical psychologist who, for reasons unknown, very much has it out for Kristen. The show establishes that, regardless of the source, evil is real. For now, Leland is its beating heart. Kristen’s team is well-equipped to match wits with Leland, but somehow Leland is almost always one step ahead of them. 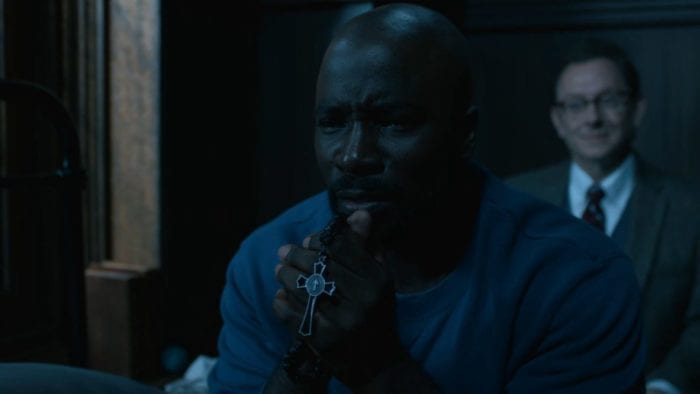 The dueling ideologies of Kristen and David drive the show: Kristen’s clinical, “rational” approach versus David’s faith. The writers are respectful to both: explanations hew closer to the scientific side, but never ridicule the teachings of the Church nor tread on the practice of psychology. That respectful balance feeds directly into the sense of unease punctuating Evil: the viewer has no means to reject either ideology at any point. Both the true answer and the prospective theory are plausible, and the factors and ramifications of some cases bleed into others later in the season.

During an exorcism, Kristen discreetly switches out the holy water used by the exorcist for tap water, which would disband the theory of the exorcism being effective, but the overseeing priest counters that through His will and good works, God still made the water Holy—pointing to the Catholic theory of transubstantiation. Again, Evil refuses to definitively entertain either side of the argument, making it equally likely that transubstantiation occurred, or that Kristen successfully disproved the possession by swapping the water. The uncertainty lingers, as it does for nearly every other case in the season.

At the conclusion of that episode, David goes for his run, maintaining his routine of reciting the “Our Father” before visiting a club and purchasing hallucinogens. Back home, as he groggily finishes the prayer, he asks, “Where are you, God?” The drug kicks in, and he sees a bright light above him before he drifts off to sleep. David later admits that he hasn’t heard from God since an epiphany he had years ago, so he uses hallucinogens to “help it along.” In the finale, David holds his rosary, begging God for enlightenment. Receiving none, he sets the rosary down and picks up the drugs. But before he can take them, he finally has a sober vision.

Like everything else in the show, this could be a misdirect. Evil revels in laying the groundwork before shattering the foundation, allowing one to build a hypothesis before casting the tiniest bit of doubt to bring the house of cards of faith tumbling down.

Evil is unafraid to plunge headfirst into horror when it needs to. From all-but-confirming that Leland himself is a demon, to introducing a strange mask-wearing girl named Brenda who brings the Bouchard daughters to a graveyard on Halloween, to David’s horrific, shifting-perspective stay in a hospital in which he is shot up with so many drugs he hallucinates demons abducting his roommate for a sacrifice in a black mass—Evil is a real nail-biter.

And then at the conclusion of the penultimate episode, we see Leland speaking with his own therapist (who is out of frame), discussing how Kristen’s verbal emasculation made him want to “rip out her heart.” The therapist asks why he didn’t, and Leland inquires whether that’s “part of the plan.” A wide shot then reveals that Leland’s therapist is a demonic goat creature, who says: “Find someone else to take her heart out, and then you and I can eat it…together.”

It’s a genuinely shocking and terrifying reveal, and the way it is delivered, without a sound cue or any other dramatic technical flair, makes it feel even colder. Evil is generally very theatrical, which gives it an engaging and endearing flavor. But the sterile cut to the physical demon signals that all bets are off. The following silent cut to black lets one of the most chilling twists of the season really sink in. This “demon” might actually be the real deal.

The knife twists further in the finale, when Kristen sees the demon in a dream immediately after vanquishing George. Later, her daughter also sees him, although it’s not immediately clear whether her daughter is dreaming. What makes this so unsettling is that there is so far nothing to suggest why each of them would see the exact same demon. The show has spent so much time conditioning viewers to try to rationalize spiritual phenomena and wonder what psychological concept or real-world source explains it, and here suddenly yanks the rug and introduces something that doesn’t seem to fulfill the criteria to suggest it has a real-world source.

It’s also likely not any sort of motif; everything so far has been mostly diegetic, so to roll out the red carpet for this demon that has now been seen by multiple characters vetoes almost any possibility of him stemming from a specific psychological phenomena. And after a dozen hours of (mostly) getting answers, Goat Therapist is the fly in the ointment that terrifyingly recalibrates the stakes for the show going forward. The game has changed: we’ve been introduced to an actual entity to cement the demonic element in our heroes’ caseload.

It’s an incredibly impressive turn, and after an entire season of conditioning to look for the seams in the spiritual hypothesis, there’s still a tiny bit of uncertainty; again, that sense of helplessness stemming from not being entirely sure where this is coming from.

Ultimately, Evil stands by one truth: regardless of the source, evil exists. There are monsters in many forms, regardless of whether they stem from psychology or possession. “This is where our beliefs overlap,” David tells Kristen. And whether a murderous act stems from psychosis or possession, a dead body and a murderer are unchanged. The good guys don’t always win here; they cannot and do not manage to save everyone they are tasked with helping, and there are questions raised throughout the season that remain unanswered by the close of the finale.

By the end of the season, Evil has settled into an extremely satisfying hybrid of mystery, horror, faith and science. I have absolutely fallen in love with this show and how it renders the viewer completely helpless to psychopathy, Hell, and everything in between. As the series approaches its June 20th sophomore season on Paramount+, there is a lot to anticipate as to how the show’s devilish ambiguity will continue to toy with the psyche.