Is it irony if Michael Emerson’s acting ability feels like a godsend for him playing such a convincingly devilish character? Leland, you love to hate him, is having the time of his life in “E Is for Elevator” trolling David (Mike Colter) as he fakes his way through being exorcised, making it obvious only to David. This week, he plays the race card, pointing out that the Catholic Church employs an overwhelming majority of white priests, and suggests that David is a “diversity hire.”

Evil skillfully avoids getting too political with its examination of alleged racism in the Catholic Church, but approaches the conversation with a level head, a respect for the men that feel maligned, and a look into how David approaches it: pushing back hard against a priest who attempts to hamstring David’s homily on race and God’s love. One of the best moments of the episode is Leland asking how David feels about being one of a very small number of black priests, and David defiantly answering, “Exceptional.” With all of the tribulations David faces in his path to priesthood, it was great to get another reminder of just how strong David can be, valiantly resisting Leland’s attempts to get into his head.

This week’s case finds the trio investigating the disappearance of Wyatt, a young man who boarded an elevator at a hotel and simply vanished. The hotel has cameras on every floor, and Wyatt is never seen getting out of the elevator. The only area not covered by surveillance is the roof, so the police concluded that Wyatt rode the elevator to the top, took the stairs down, and disappeared. His girlfriend Felicia disappeared not long after, and the police concluded that the couple ran off together and closed the case. Wyatt’s parents received a garbled phone call from Wyatt, from which they could only decipher the phrase “Save me” before the call ended. Wyatt’s father reveals two interesting clues in Wyatt’s bedroom: “EL GAME 8-4-2-13-1” carved into Wyatt’s desk, and a massive pentagram drawn on his floor underneath his area rug.

It’s a point of contention among Evil fans whether the Bouchard daughters are annoying or charming, and I tend to fall into the latter camp. Whenever all of them are in the same scene, they have a tendency to all talk noisily over each other, which feels like a funny sort of vent releasing all of its built up pressure. It’s a break from the creepy stuff, and their propensity for the macabre, such as arguing loudly over whether it’s possible to survive a plane crash, is adorably weird.

This week actually finds the girls helping out their mom with her case. They quickly recognize the numbers carved into Wyatt’s desk are part of the Elevator Game, in which players find a 13-story building and visit each floor enumerated in the sequence, culminating in visiting the 13th floor and holding the call button at the same time, with the end result being a visit to Hell. Of course, the girls are dying to try this out and rescue Wyatt, so a skeptical Kristen brings three of her daughters and Ben to try it. Unfortunately, the hotel doesn’t have a 13th floor labeled on the buttons. It’s one of those “superstitious” buildings, Ben says.

It’s not very often that we get just Kristen and Ben together without David, especially when they’re in an uncomfortable situation. Mandvi and Herbers have already proven their strong chemistry, and it really shines in “E Is for Elevator.” Ben spends a lot of time with Kristen and her daughters this week, and the way he interacts with Kristen and the girls has led me to declare that I am officially shipping Kristen and Ben. Yeah, Kristen has a husband, but that dude is so marked for death he might as well be wearing an orange parka and speak in a muffled voice.

One of Felicia’s friends happens to run into the group as they give up on playing the game, and warns them against proceeding. She was recording their phone call while Felicia tried the game on her own. Her exclamation that she figured out the game, followed by a distorted, blood-curdling scream before the call suddenly ends, is one of the best and most frightening jump scares of the show’s entire run so far.

I’m not a terribly superstitious person, but when it comes to haunted buildings, hidden floors, and secret catacombs, I’m super-duper-stitious. Ben’s brief fling, supernatural enthusiast Vanessa, takes him to a fairly wacky tour guide at the hotel, who talks about the “Teke Teke Girl,” a young woman who was cut in half by an elevator and now haunts the hotel, dragging her top half around with her fingernails making an eponymous sound on the floors.

The creepiest sequence of Evil S2E4 finds Kristen cleverly stopping the elevator between floors 12 and 14 to see what floor “13” might hold. Unfortunately, that involves Kristen getting nearly crushed by an elevator malfunction, and held in place as the Teke Teke Girl crawls towards her. It’s a terrifying scene, and Kristen manages to reach up and free herself, but she chalks up the Teke Teke Girl to her anti-hallucinogenic meds causing only more hallucinations. My guess is that someone swapped those meds out, but in true Evil fashion, there are plenty of possibilities. 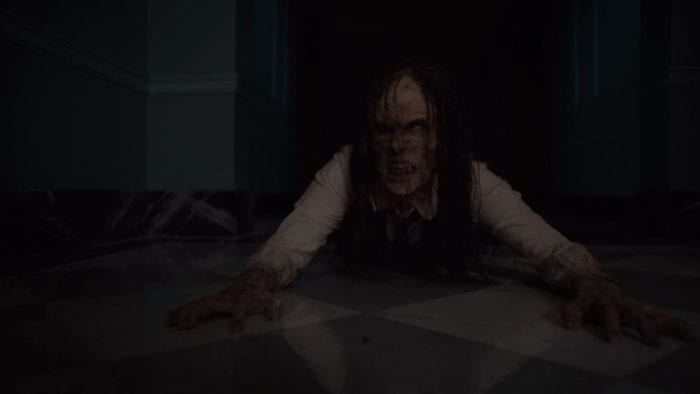 I still do not trush Sheryl as far as I can throw her (and my back is trash, so that’s not far). Her request to set up a bed in Kristen’s office (which is a separate structure from the house) and not, say, on the couch, makes me suspicious. What the hell is she up to? I’m worried that Kristen’s files and/or computer may be at risk of compromise, but I can’t get a read on why Sheryl would want that. I don’t think she’s acting on behalf of Leland. Is she possessed as well? Does demon activity factor into the Bouchard bloodline as a whole?

The “resolution” of the case is more definitive than usual, and not particularly supernatural—but that doesn’t make it less terrifying this time. As Ben discovers, the button sequence takes the elevator down, into the catacombs beneath the hotel. As Wyatt stepped out of the elevator, the doors closed, trapping him down there for him to slowly die. Felicia followed suit some time later, and met the same end. Ben finds their decaying, bug-infested corpses in a final embrace on the gravel floor. This unimaginably horrific way of dying—trapped, alone, terrified, and slowly dying from a combination of thirst, hunger and suffocation—is perhaps the most unsettling conclusion to the couple’s disappearance. 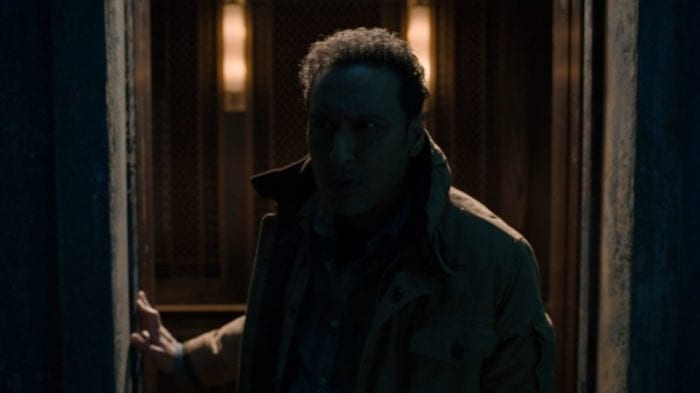 Seemingly doomed to a similar fate, Ben finally reaches a breaking point. Ben the Magnificent, staunchly confident in there being a rational explanation to everything, finds himself visited once again by Abbey, his demonic so-called “night terror,” who is now definitely not that. Abbey is able to recite in Urdu a hadith Ben’s grandmother used to tell him, translating to, “The dead are tortured in their graves to the point that the animals can hear them.” Man, Ben really got the fear instilled in him when he was a kid. When you tell an adolescent that a jinn with a burning face can visit you and that you’re going to get tortured so hard the animals can hear you, you can’t blame the guy for walking away from his faith.

Abbey invites Ben to relax in her embrace and use the last dregs of his phone’s battery to write his will. Then, Ben begins reciting a dua, a profound invocation of divine help. In his darkest hour, Ben has switched back to his religious upbringing. This will surely have implications in later episodes. Maybe a journey back to his faith? But this line right here—this is interesting: Ben says to Abbey, “You know why you’re helpful? I know what I’m fighting against.” Even Abbey seems unsure how to respond. Ben has seemingly had a moment of clarity, and I can’t wait to see where this leads him. This is also the second time in as many episodes that we’ve seen how different faiths can intersect, so transforming Ben from a staunch non-theist into a potential reborn believer in Islam will really shake up his dynamic with Kristen and David.

When the door suddenly opens, with David and Kristen having figured out how to access the catacombs (pressing 1 and 3 and the call button, instead of 13), Ben bellows for them to keep the door open and dissolves into tears as Kristen holds him in the elevator. It’s a devastatingly emotional moment, seeing the even-keeled, confident Ben the Magnificent absolutely falling apart in Kristen’s arms. As a final creepy moment, Abbey is visible in the elevator with them as the doors close, rising back up to safety.

All things considered, “E Is for Elevator” was an extremely creepy and stressful episode, and the show continues to fire on all cylinders. There weren’t as many far-reaching clues or bread crumbs this week, but the storylines featured were thoughtful and very compelling. I’m also really looking forward to Ben’s continued character development and his apparent journey back into believing in the spiritual and the supernatural. I don’t look forward to days off anymore, I look forward to Evil.

Also, Leland brings a huge bucket of popcorn to church for David’s homily. Love to hate him. 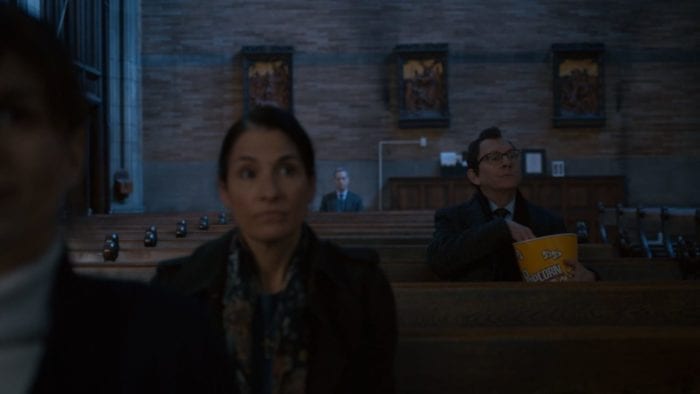