When I say I’ve been waiting years for this game–I mean it. The first time I saw Garden Story was late 2019 when developer Picogram announced they’d be partnering with Rose City Games, who would publish the title. I’m a massive fan of these types of games that combine the action-adventure of Legend of Zelda with the foraging and quests of Stardew Valley. Plus everyone is a fruit, vegetable, or other adorable critter. These are my thoughts after playing a few hours of the game and reaching the second area.

Garden Story begins with Concord, a young Greenling, leaving the Kindergarten for the first time to venture into the world. A mysterious Rot has taken root all over the land and it’s your job as the newest Guardian to assist in removing this threat while also helping the townsfolk in each area. You’ll start in Spring Hamlet, with the later areas continuing the seasonal names. They all have a distinct style and the edges of areas “blend” together (spring plants giving away to summer ones) which is quite cute.

Each day several tasks will be put up on the noticeboard outside your house. They’ll be things like defeating a certain number of enemies, helping a villager by collecting materials or repairing infrastructure around the area. These are not required but each one levels up a different aspect of the town, which will grant more items at the local store and other perks. There is enough time with the day/night system to do these and more so it doesn’t feel rushed at all. Favors are additional quests that don’t have a time limit and are harder and thus have greater rewards. 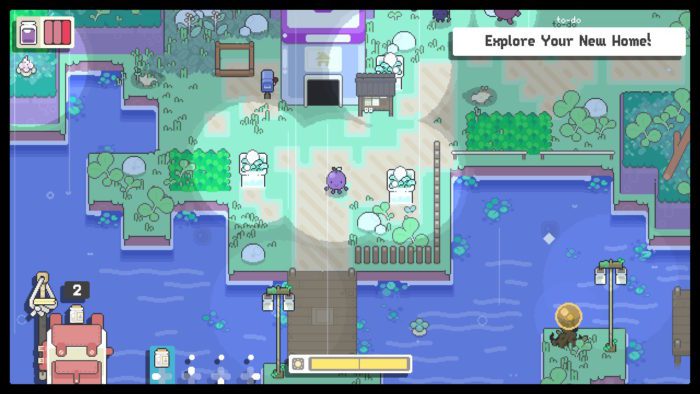 Combat is fittingly simplistic and you’ll start with a small sword (as is tradition) which can be upgraded with money and materials at the store. You’ll also be given a jar of Dew–the life-giving essence in this land. It’s a sort of Estus Flask that can be refilled at any of the wells scattered around the map. Different weapons (or tools, more accurately as you are a gardener!) will be acquired as you progress, each with different strengths and weaknesses. The hammer is slower but stronger, etc.

Controls are quite natural and easy to get the hang of. Your Dew Jar has a dedicated button, along with a dash that makes Concord do a roll when tapped instead of holding it down. The map gives you additional information like the time of day and the last few events (items collected, favour accepted, etc). Inventory is separated into helpful categories like tools and materials. A hot bar lets you assign four items to easily switch between tools. The stamina gauge is used to attack and dash/roll but can be expanded and it recharges fairly quickly. On the bottom left is a cute little backpack icon with the tool you’re using attached.

Another system is “Memories”. After completing certain goals, talking to specific characters or discovering statues of old Guardians you’ll receive it as a Memory, which can be equipped to add stats like more health, stamina and the like. Each Guardian has several Memories and Concord has a total of nine Memory slots which are unlocked as you progress.

The music for Garden Story was composed by Grahm Nesbitt who has done an excellent job complementing the soft, rounded graphic style with soothing guitars, piano and flute melodies. It’s always a pleasure when these things mesh together like this, working in aid to create a perfect pie rather than separate ingredients sitting next to each other. Each area has its own theme to suit the surroundings (ocean, forest, snowy mountain) that are consistently charming. 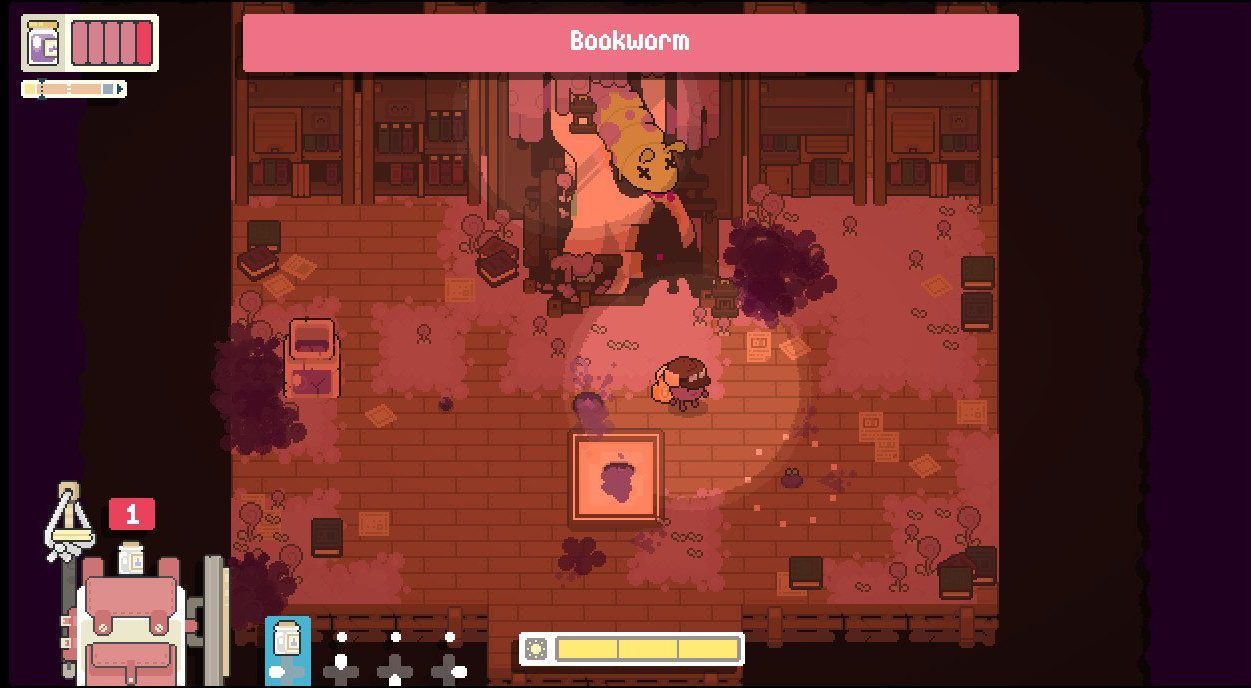 At the end of the first area (and I assume the later ones as well), there’s a dungeon with a few simple puzzles and a boss. I actually died a few times attempting this because the Rot tends to spew out poisonous gas clouds that slow your movement and I was surrounded. So while the overall game has the appearance of being a cakewalk I slipped up and played myself! I’m curious how the later bosses will be–if they’ll have more complicated attack patterns or status effects.

The highlight of Garden Story for me is the wonderful pixel graphics. They’re simple but still offer a lot of movement and feeling. Small floating emotes above a character during conversations are a cute touch. I also just really love the environments–little bits of grass and rocks here and there, trees and houses for the villagers. It doesn’t feel forced or sterile but again compliments the nature focus of the game.

It’s also got a very positive storyline, with the core themes being the importance of taking care of nature and community. You’re here to help the town and also help discover who Concord is as the new Guardian. Learning about the previous Guardian and the history of the world is fairly detailed and enjoyable. A collection is available in each area where you can deposit materials and gain access to books about the local area and its’ people. I love the completionist aspect this adds and it’s not too difficult–you’ll come across most of the materials naturally anyway.

With the game’s relatively mild difficulty and simple puzzles, I think this could be a great game to share with a younger gamer and maybe even introduce them to the adventure genre.

Overall I think Picogram and the team at Rose City Games have done a phenomenal job here with Garden Story. It’s clear how much love and work went into this title and I can’t wait to dive in deeper.

Thank you to Rose City Games for providing a copy of Garden Story.