A friend recently introduced me to Vonnie Kyle, a Portland-based indie singer-songwriter who just released a new music video for her single, “Imperfect Parts.” As of late, I’ve been a pretty hard sell when it comes to new media. The surplus of available content has left me feeling fairly jaded, so I initially resisted sitting down and listening to a new artist. But when I listened to this song, I was immediately shocked.The song opens with a simple four chord electric guitar riff that is completely unadorned: no reverb, no special effects, no excess. It was almost jarring, as I’ve become accustomed to excessively overproduced music. After the intro, the bass, drums, and vocals file in, and the song becomes something more familiar and recognizable.

Stylistically, this song reminds me a bit of Sara Bareilles—the thoughtful, dramatic structure, as well as the poppy, upbeat chorus. The clarity and diction of Vonnie Kyle’s vocal performance resembles a kind of rock and roll feel with a musical theatre sensibility; it’s precise and cutting but isn’t campy or over the top. By the end of the song, her voice becomes something else entirely, but more on that later.

The primary narrative of the “Imperfect Parts” music video depicts Vonnie Kyle on a solitary journey. She travels with a brown leather suitcase and deposits various items from its interior along the way. She leaves behind what is no longer necessary, and by the end of the video, the suitcase is empty.

The music video and the song both emphasize hands: holding, tossing, dropping, and stabilizing (this is also true of Vonnie Kyle’s other single, “The Brink of Breaking Down”). It calls to mind the very human desire to touch and hold, but also to be held, steadied, and contained by another. It’s also playful: throughout the video, Vonnie hands herself various fruits, and even drops one on her own head. In these scenes, she’s often staring at the viewer with a serious, even austere expression. There is something disarming about her gaze; it’s hard to tell whether she is going to laugh, sing, or scream, and her eyes and expression never cease to provoke something in me. It’s like she is silently challenging the viewer: “This is who I am. Who are you?”

One of the most striking things about Vonnie Kyle, in addition to her obvious musical proficiency, is her ability to communicate complex emotional states with her body. Somehow, she is able to tell a story simply by walking with a suitcase or staring into the camera. Her gait, gestures, facial expressions, and even the movements of her eyes are pointed and deliberate; they effectively tell a story without words. For me, these moments are more powerful than the louder, more familiar scenes where she dances or sings into a microphone.

There is another moment in this music video that passes so quickly you might not even notice it, but I think it encapsulates the underlying drive of the song. In this brief scene, Vonnie lays on the ground and rests her head on her suitcase. She is encircled by several yellow candles, disc-shaped pieces of paper, orange flowers, and scattered bits of debris. It’s like a vigil, but for a missing self or a lost feeling of belonging rather than a missing person. 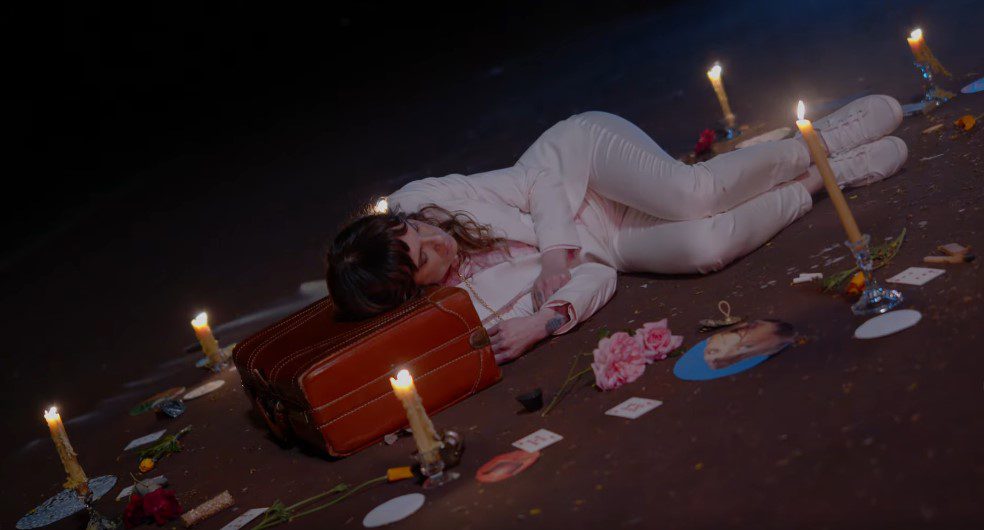 This scene depicts the way we call out to the cosmos with offerings and sacrifices when some essential fragment of our being has gone missing. Vonnie rests here, protected and at ease within the circle. I imagine that, before long, what she is seeking will come home to her. Smoke passes over the scene and before we know it, it’s over.

“Imperfect Parts” tells the story of an unconventional relationship rooted in acceptance, both of self and other. But for me, the song and the video also depict the shaky, vulnerable beginnings of an artist willing to take risks and try new things in order to get closer to the edge of who she really is—or to glimpse who she might become.

There is something triumphant about this song. The whole piece builds and progresses toward the final seconds when Vonnie Kyle finally arrives at her destination, somewhere both geographic and emotional. This arrival is signaled by the transformation of Vonnie’s voice. She sings “I’d build a city using all imperfect parts; I’d live in your city made of all imperfect parts.” She drops her voice and lets loose. Whenever I hear this moment, something in me says, “Yes, this is you, this is it!” But in order to get to this place, she had to build a city, piece by piece, with bricks made of words and sound. And, most importantly, she had to say, “Perfectionism be damned.”

I’m looking forward to following Vonnie Kyle’s career and future successes. Just like her traveling persona in the “Imperfect Parts” music video, Vonnie Kyle is a seeker on a journey—although I’m sure she won’t be alone for the ride. I get the sense that we’re all welcome to come along, as perfectly imperfect as we are.

Follow Vonnie Kyle on Instagram. Buy her music on Bandcamp and stream it on Spotify. Her forthcoming album will be released in Spring 2022.