The following focuses on the opening credits/title sequence of Yellowjackets as it appears in S1E3 and S1E4, and includes spoilers through Episode 4 of the series (“Bear Down“)

As of this writing, I have seen the first four episodes of Yellowjackets and have been thinking about the opening title sequence since it appeared in Episode 3.

That this was withheld until then is itself noteworthy. The pilot hits with “Today” and Episode 2 with “Mother Mother,” right where opening credits would go. So one might even argue that these episodes were before the beginning, and it is with Episode 3 that we’ve really begun.

Regardless, my intention here is to set myself to interpreting what we see in these frames, noting that of course there is no guarantee that what we see will happen in the show, just as the poster promo doesn’t necessarily mean Jackie will get a nosebleed or have a bee land on her face. 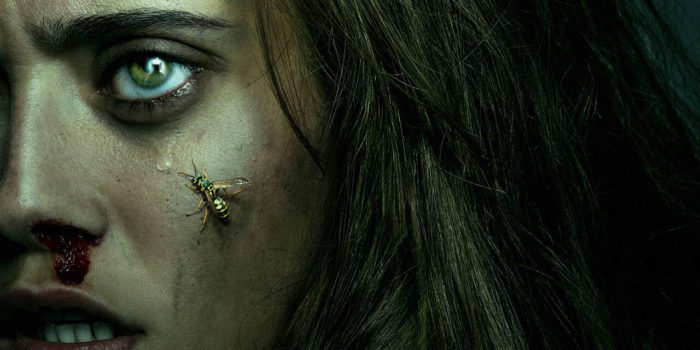 Nonetheless, there are a number of shots included on the grainy VHS footage-type montage that seem worthy of discussion, so I am going to take them and jump right into the deep end of speculation.

Some might prefer to just go along for the ride and not engage in this kind of theorizing, which I totally respect. I find myself somewhere in the middle on the question. I can’t help but obsess over the details, but don’t care a lot if I end up being right or wrong. I love opening title sequences and care more about interpreting their thematic significance than I do about finding clues, though I will be doing both.

In many ways, my starting point was in noticing the Man With No Eyes at the end of the opening credits. The most significant thing is simply that he is there, shown in the woods. His first appearance diegetically was later in Episode 3, as the young Ty attended to her dying grandmother, so we might not have noticed his presence the first time we watched these titles. At least, I didn’t.

It’s a cool trick the creators of Yellowjackets played, as on a second viewing this image jumped out to my consciousness and frankly terrified me a bit.

But so, if he is in the woods and we take this seriously then it is a strong indication of a supernatural element in Yellowjackets. Alternately, we might speculate that he is a vision that only appears to Taissa—some indication of her creeping madness, not actually seen but also imagined as her nana cried out in fear. Being a phantasm wouldn’t make him any less real.

I can’t help but draw some connection to the recurring symbols—on trees, the floor of the cabin attic, the postcard—though I also don’t have much of an interpretation of this symbol to offer at the moment. Perhaps it is playing with the hobo code and some sign of danger?

In Episode 4, Natalie’s dead father tells her “it’s waiting for us,” so what is it? Is there a connection to how she has proverbial blood on her hands, as though it is some punishment that awaits, or is this simply a manifestation of the fear of death stemming from her own psyche?

In another shot we see Jackie, on the soccer field, drawing her finger across her throat. So we can’t help but think of the slit throat of the girl at the beginning of the pilot. She was wearing Jackie’s necklace but the hair color doesn’t match. So is this someone else? Why does she seem bewildered?

Perhaps it is just fear. Other shots in the credits show the girls forming a circle, as though some voting or other selection process were occurring. So perhaps it is a game and the necklace is some kind of marker?

Maybe Jackie survives and donates this totem, though I am still inclined to think she’ll die earlier. Regardless, we are left to wonder how this all functions, as it also seems to involve blindfolds and a marking on the head. And whence the nightgown?

Episode 4 shows us Natalie effectively killing a deer to feed the group, so out the window goes any thought that they’ll need to practice cannibalism to survive. No, this is a game, a ritual…the purpose involves enjoyment.

No wonder it is such a secret.

Here’s a question that clearly has an objective answer: who is this guy? That is, clearly the man in this image above that blips on the screen for only a couple of frames towards the end of the Yellowjackets opening credits is a human being in the real world and it should in theory be possible to identify the actor.

I, however, do not feel that I have been able to do so. Of course, one’s first thought is that this is Coach Ben Scott (Steven Krueger), but I wonder to what extent that’s because we can’t think of anyone else who it could be. If it is Ben, this would have implications of its own, insofar as the man in the doorway here looks rather threatening. Could it be the case that, as Misty goes too far, coach decides he’s had enough? Or might he perhaps become possessed by some demonic spirit in the woods? He seems like a pretty nice guy so far, all things considered.

But I don’t think it’s him. I don’t think it looks like him. I could be wrong, but I feel like this is a mystery slipped in between frames of the opening title sequence—a character we haven’t met yet and thus know nothing about. It’s not the adult Travis, if you might be thinking that, and plus it seems pretty clear that this is at the cabin in the woods. So Ben feels like the only option, but I still don’t think that is Steven Krueger I’m looking at.

If that doesn’t pique your curiosity, or you’re inclined to just tell me that it’s Ben and move on, here’s another shot that you might find more intriguing. Four girls look downwards—are they perhaps looking into the pit trap we saw in the pilot, at a time when they had started with the ritual murder but before they all started wearing masks? That the girl on the top left is Misty is clear, as is the fact that it is Taissa on the bottom right, but who is the girl to the top right of the frame? I tend to think it is Mari, which is noteworthy mostly because she’s felt like a background character so far, but I have to admit I’m not sure. The girl on the bottom left looks like Akilah.

Other shots seem present in the opening credits more to contribute to the vibe of the title sequence than anything, as we see the girls partying, someone puking in a parking lot, and so on. Maybe it is worth noting that in the mix is a shot of someone being chased, which for some reason makes me think of 2021 Natalie though I can’t point to concrete reasons as to why other than the dark hair.

Of course it would be Natalie chasing someone, not Natalie being chased, which does track with where her character arc currently stands. I think this might happen somehow as she investigates Travis’s death.

The overall vibe is quite effective, regardless, soundtracked by “No Return” by Craig Wedren and Anna Waronker, which is such an effective homage to a certain style of ’90s rock that I didn’t trust my judgment that it was original to Yellowjackets until I got confirmation. The name of the song itself is striking, given that we know with certainty that there is some return from the wilderness insofar as we’re following certain characters in 2021, but the point is clear enough thematically—there is no going back from these events, which split time into a before and an after.

In retrospect, we might see a thematic progression from The Smashing Pumpkins in Episode 1 (“Today is the greatest day I’ve ever known”) to Tracy Bonham in Episode 2 (“I’m hungry/I’m dirty/I’m losing my mind/Everything’s fine!”) to the wailing of “No Return” we get come Episode 3. Given that Craig Wedren and Anna Waronker are credited for the music on Yellowjackets, and not just for this particular song, it’s entirely possible that we may see the opening song change again at some point in the future, and perhaps the visuals as well.

One thing I know is that it would have felt quite off to have had this opening title sequence in either of the first two episodes. Yellowjackets simply wasn’t there yet. But I’m so glad we have it now.

Enjoyable on its own terms, and reminiscent of my personal experience stumbling onto the video for NIN’s “Closer” late at night when I was a teen in the ’90s, the style nonetheless isn’t nostalgic so much as it feels novel, tying together the past and the present in the same way the narrative of Yellowjackets does—not through straightforward connections so much as through a kind of harmony.

I’m sure there are other things in these opening credits worth talking about that I’ve missed or didn’t find worth noting. I’d love to hear what you think, so let me know in the comments!

[Editor’s Note: This article has been amended to reflect the presence of Akilah in the shot of the girls looking downwards.]