Oh hello, and a Happy Christmas to you! Whether you celebrate or not, we thought you might be looking for some things to watch and listen to. We just happen to be publishing on the day itself this year. Some of our recommendations are holiday-themed and some aren’t. But maybe the ones that aren’t sort of are, too? These are our presents to you, anyway, and we hope you enjoy them…maybe even feel some glee, actually…

If you’re unfamiliar, each week you’ll find in this space a set of recommendations from our writers, ranging from TV and film to music and podcasts, or whatever else we might be into at the moment. These things may or may not be new to the world, but that’s not the point. What matters is what’s interesting, and what’s worth your time. This week’s entries include: Glee, The Matrix Resurrections, Kate Bush, The Grafenberg Disciples, and Barb and Star Go to Vista Del Mar.

Christopher Pilbeam: Glee is a sometimes inexplicable, oftentimes delightful, progressive/problematic oddball of a show. Watching this episode remains one of my few Christmas traditions—but of all the Christmas episodes, why ‘Glee, Actually’?

Well, there’s the tributes to Mean Girls and It’s a Wonderful Life; there’s the fact that I don’t know many other Christmas specials that include a Hanukkah song; it’s also a welcome oasis in the middle of the dreaded Kurt/Blaine break up storyline…and isn’t ‘White Christmas’ just their best Christmas duet?

If you believe that Christmas is a time for kindness no matter what, for taking care of each other and seeing past what makes us different, then this episode epitomises that. The mini plots that make up this episode are as heartfelt and ridiculous as anything in Glee, and it’s sort of like getting chain punched by the Ghost of Christmas Past. Everything you could need for a happy Christmas (you thought I was going to say ‘gleeful’ didn’t you? For shame). 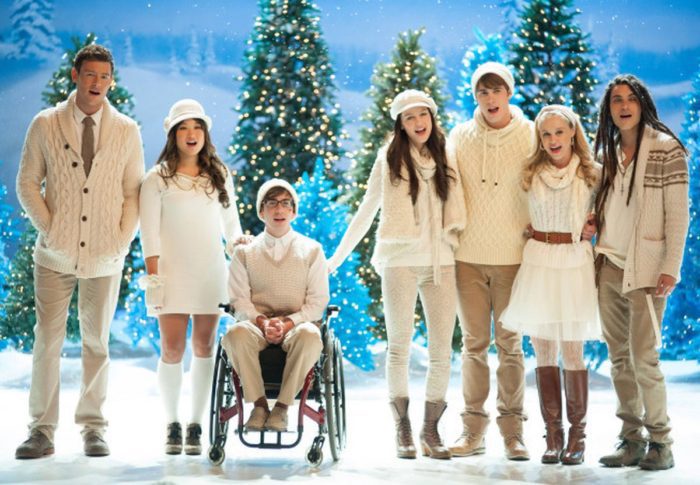 Alix Turner: In 2018, I met up with a friend again for the first time who had been my regular nightclub buddy half my life ago. Neither of us was the same, but it gave me such a thrill that we still had common interests. We had both slowed down a little in our 40s, though on the other hand couldn’t entirely believe we were that age.

I felt just the same this evening, when I watched Lana Wachowski’s The Matrix Resurrections, and that was such a relief! I had woken up anxious that I would feel let down by that beloved world, as I had when Terminator: Dark Fate was released. Instead, I met up with an old friend again. When The Matrix first came out, it was like an intellectual teenager—moody, precocious and radical—and the mark it left stayed with me ever since. The new film takes a little time to get going, but that’s OK; none of us are as young as we were. It may have a loopy plot, full of bizarre leaps in logic, but that’s OK too; this was a franchise that felt no need to grow up and was having fun playing with the cool kids while still acknowledging its heritage.

The Matrix Resurrections may not be one of the best-written films of the year (and I cannot be expected to forgive what was done to Rage Against the Machine’s “Wake Up”), but it was wonderful to spend an evening in the company of an old friend, and see what had become of them.

Steve Swift: Be Johnny On The Spot. Get in on the ground floor of this stupendous duo from California, The Grafenberg Disciples.

What’s that you say? Soul and AOR? Fruity horns and Bruce Hornsby atmosphere? With jazzy moments and a sweet Disco dance?

Why wouldn’t you want to be at least an acolyte…

Hawk Ripjaw: Barb and Star Go to Vista Del Mar was a movie I’d had my eye on for some time, but just never got around to to renting it. I didn’t think much of it until Sunday, when I discovered it was streaming on Hulu. What a great decision it was to hit Play, because for following 100 minutes I was giggling like a lunatic at one of the best comedies of recent memory.

The enthusiastically stupid Barb and Star Go to Vista del Mar features Barb (Annie Mumolo) and Star (Kristen Wiig), two middle-aged best friends who live and do literally almost everything else together. When they lose their job at their beloved furniture store, the pair are convinced to take a vacation to Vista del Mar, Florida. Not having ventured to the outside world recently, if ever, the two shrill besties prepare for an amazing vacation and…accidentally stumble headfirst into a vengeful supervillain (also Wiig)’s scheme to unleash deadly mosquitos on Vista del Mar’s Seafood Jam festival with the help of her lovestruck henchman Edgar (Jamie Dornan).

Reminiscent somewhat of Austin Powers, Zoolander and The Naked Gun, you really get the sense that this is a creatively unrestrained project and the filmmakers are making exactly the movie they want to. The humor here relies mostly on ridiculous dialogue, unexpected sight gags and non sequiturs. To reveal them would be to ruin the surprise, of which Barb and Star has many. There are several moments in which an expected punchline veers off into something else completely absurd, and there’s a constant sense of delight in how divergent the humor can be.

The entire cast is great, but the surprising standout is Jamie Dornan, who is 110% game for the closest thing to a straight man, but also bound to the gonzo rules of this world. Dornan’s comedic timing is just terrific. Damon Wayans Jr. is also fun as Darlie Bunkle, a P.I. spying on the pair. A few original songs briefly transform the flick into a musical, to great effect.

There hasn’t been a wacky comedy in this vein in a very long time, and I’ve missed it tremendously. Barb and Star is endlessly unpredictable in its bonkers comedy, but it wouldn’t work as well as it does if not for its genuine wholesomeness. Barb and Star’s friendship is the heart of the movie, and their dynamic is never overshadowed by the rest of the movie. It’s an enormous amount of fun.

Daniel Siuba: One of my favorite winter albums is Kate Bush’s 50 Words for Snow. Although the album is only 7 tracks long, the shortest song is nearly 7 minutes in length and the longest track is over 13 minutes, so each song is substantial. Throughout the album, Bush’s vocal performances are pristine, expressive, and multifaceted; she plays many characters, and she masterfully embodies them all.

My personal favorite is the opening track, “Snowflake,” in which Bush sings from the perspective of a snowflake that’s just been born. The production, arrangement, and performances are spacious, polished, and emotionally evocative. I think Bush’s performance and the recording itself are about as close to perfect as a song can be.

Another standout track is “Snowed In at Wheeler Street,” which features Elton John. This song tells the sprawling tale of two lovers, played by Bush and John, who keep finding each other again and again in different incarnations over the span of many centuries. Sometimes they simply make eye contact and cross paths, sometimes they fall in completely in love, but regardless of the outcome, they inevitably meet again. The song is admittedly a little over the top, but I think the authenticity of the performances eclipses the schmaltziness.

Another favorite is the title track, which features the multi-talented Stephen Fry, who plays a named Professor Joseph Yupik. This song is a kind of poetic ping-pong between Bush and Fry. Bush playfully urges the Professor to come up with 50 words or phrases for snow, and he delivers: “vanilla swarm,” “robber’s veil,” “mountainsob” “icyskidski,” and “shimmerglisten,” to name only a few. Bush keeps a running tally throughout the song (“Come on Joe, just 22 to go!”) and the momentum builds as he approaches 50. It’s a hypnotic listening experience, and the final twist is deeply satisfying.

If you’re looking for an introspective, poetic album about winter and love and nature, look no further.

More From: What's the Buzz