The Kominsky Method is entertaining enough television. As I watched the first season in recent days, it made me laugh on multiple occasions. I won’t tell you not to watch it. The thing is, it seems to take itself to be more than that, and—if the awarding of Golden Globes is any indication—so do others. But, it isn’t.

In thinking about the show, I find myself recalling Evan Puschak’s “The Epidemic of Passable Movies”—a video essay from The Nerdwriter that was released a couple of years ago. Beyond my general agreement with the thesis there—that it is not so much the terrible film as the mediocre one that risks wrecking the medium—it is the claim made in the latter part of the video that I kept thinking about as I thought about The Kominsky Method: that the passable movie doesn’t relate to life, so much as to other movies and the way they represent reality. There is a shorthand—a series of tropes, if not clichés—used to convey information to the audience. It isn’t realistic, but we may become so used to it as to no longer realize that people do not, in point of fact, talk to each other this way, or do things like this.

And it is that sort of thing that I think pervades The Kominsky Method. It isn’t as bad as some of the movies that Puschak cites. It doesn’t straightforwardly recreate scenes we have seen in other films or shows—except for the time when Sandy tries to drunkenly pull a Say Anything move, which I suppose one might view as meta—but it does play on the same tired tropes we have seen in any number of other things.

An older man faces a crisis of meaning. There is a woman who seems like a possible path out of that. There is a curmudgeonly friend with cynical takes. (Am I watching Wonder Boys again, or is it just Michael Douglas’ presence that is making me think of that?)

This wants to be a show about the challenges of ageing, and I presume this is part of what has garnered it accolades. Here is a cast of older actors (and it is a great cast!) dealing with issues that arise as one faces mortality.

Except, we don’t really get that. This is a Hollywood insider’s idea of what it’s like to confront old age. Sandy (Michael Douglas) has urination issues, but don’t worry; he can still fuck just fine. Norman (Alan Arkin) is supposed to be adrift after his wife’s death, but he never really is in a deep way. Or rather, there is nothing in this story that actually makes the viewer confront the problem of death; either that of oneself, or of an other.

Norman may not know what to do with himself, and may claim to be contemplating suicide, but this never seems serious. It’s all played for laughs on a very superficial level. He even references Thelma and Louise in the scene where the worry comes the closest to being pressing—a reference to a movie, in lieu of an engagement with real life.

Of course, this is a comedy, so maybe this is all fine. I didn’t expect The Kominsky Method to be a source of deep insight. But comedy can cut deeper than this, and I would even suggest that other nominees for this category of Golden Globe this year do cut deeper than this. So whence the acclaim for this passable show?

I can’t help but think it is a matter of the industry patting itself on the back.

The show takes itself to be presenting something about what it means to get older, but it only does so through a series of tropes and clichés. Sandy has trouble peeing. Norman talks to his dead wife. Sandy’s daughter is a stereotype of disappointed responsibility; Norman’s is a stereotype of a reckless addict. None of this touches down with the real world, though of course people can have problems related to any and all of these things. But it doesn’t look like this. This is a story being told through other stories, playing on those tropes we have seen elsewhere, and never meaningfully engaging with the human condition.

What may have bothered me most along those lines is Sandy’s relationship with Lisa (Nancy Travis). If we are technical about it, this character is not a Manic Pixie Dream Girl for a couple of reasons, but I still kind of felt like she was; like the show was saying an older woman could be that, too, as opposed to actually giving an older woman a meaningful role. That is, Lisa’s character is totally defined in terms of her relationship with Sandy. She has agency, but it feels like all we see of her life beyond her relation to him is her asshole son; and even that only really enters in relation to Sandy.

Maybe she isn’t the quirky young woman who “saves” the older man from his ennui, but she really kind of seems like that quirky older woman who might do the same. There is no real depth to her character. 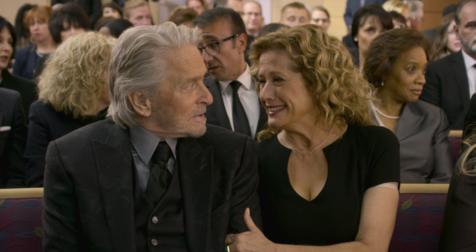 This is the trick the show tries to pull overall: to make us think that because the characters are older, it is doing something meaningful. It wants us to think that it is fighting against ageism, but really it just casts older actors in juvenile roles.

Sandy and Norman aren’t adults; they are adolescents wearing the mask of age. Lisa might be, but she hardly gets fleshed out. Mindy (Sarah Baker) might be, but her character is so determined by her relation to her father that it’s hard to say.

But that question moves away from the main point, anyway, which is that The Kominsky Method really does not have anything interesting to say. Only someone in the industry could think that problems about fitting in at your old agency, or struggling to find an acting gig, have something meaningful to say about the human condition.

The show is entertaining enough. It’s passable. But if you really want something that grapples with ageing, watch Lucky and/or The Straight Story.

The Kominsky Method isn’t really good for anything except for a few laughs.

Caemeron Crain enjoys staring into the abyss, especially when it stares back. He also has a cat.