Movies about dysfunctional families, no matter if they are little independent gems or classic favorites populated by Hollywood stars, are always prime landscapes for both drama and comedy. They are successful because they make us feel better about our own family we have at home. We either step back saying “Finally, there’s someone out there who has it as bad as I do” or “Gosh, I guess my family’s not that bad.” We either laugh at their shenanigans as wildly different or with them as kindred spirits and fellow gluttons for punishment. One can argue that every family is dysfunctional to some degree and that it’s just a matter of what your definitions are for dysfunctional, unique, crazy, and, most of all, normal. Besides, “That’s how we do it in this house” always wins.

In 2008, Tracy Letts‘ play August: Osage County, centering on the women of a particular rural Oklahoma dysfunctional family reacting to a moment of loss, went to Broadway and won five Tony Awards including Best Play, three Drama Desk awards, and the Pulitzer Prize for Drama as one of the most decorated theatrical productions of the past decade. When a play gets that kind of success, Hollywood was bound to take a stab at it. After all, movies, with their endless boundaries of space and location shooting, are supposed to be limitless stages. Successful TV show-runner John Wells (ER, The West Wing, Shameless) was the man who took that shot at August: Osage County in 2013 and he brought a star-studded cast with him.

Where movies based on plays commonly fail is when the cinematic expansion of scope and setting ends up stripping away the story and performance intimacy that made it special on the smaller stage. The good films based on plays don’t lose that closeness and connection while still giving us something deeper to see. In every way possible, the film adaptation of August: Osage County is one of those successes. It breathed vigorous life into the stage setting by fleshing out a real location filled with dynamic performances.

August: Osage County, with its uncanny balance between uproarious comedy and striking family drama, is a crowd-pleasing gem and one of the finest ensemble movies of this past decade. Three-time Academy Award winner Meryl Streep played Violet Weston, the cantankerous truth-telling family matriarch addicted to the haze her multiple prescriptions drugs give her while dealing with mouth cancer. Violet is full of hateful sarcasm that drives her family crazy.

The unfortunate and trapped man married to her is Beverly, a former published poet and steady alcoholic, played by Sam Shepard. They share three daughters and are lifelong residents of Pawhuska, the county seat of Osage County in northeastern Oklahoma, a place more known as a Native American center than anything else. The couple just hired a local Native American woman Johnna (Misty Upham of Frozen River) to cook and clean around the house when Bev runs off and goes missing one afternoon.

After his disappearance extends to several days, Violet’s loudmouth sister Mattie Fae (Emmy winner Margo Martindale) and her calm and homely husband Charlie (Oscar winner Chris Cooper) alert nearby family to come and help with the situation. The first on the scene is Ivy (Julianne Nicholson of Kinsey), the middle daughter and the one that never left Oklahoma. Her guilty patience is what keeps her close by despite constantly being belittled by her mother for never settling down with a man.  The other two daughters couldn’t wait to leave back in the day and haven’t come back to Pawhuska in years until now. 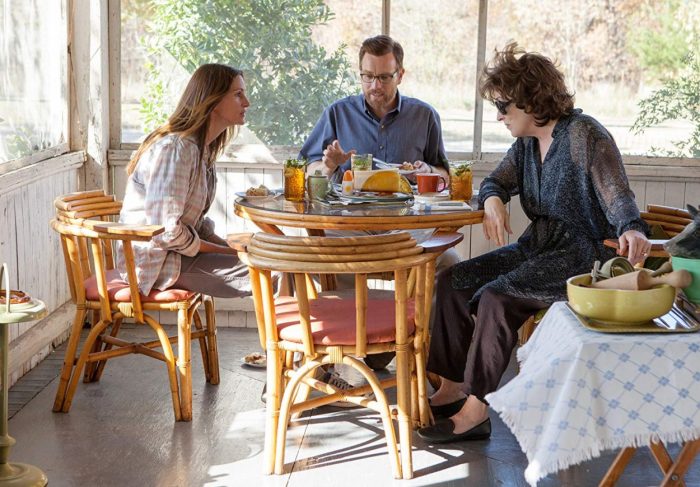 Barbara, played by Oscar-winner Julia Roberts, is the oldest daughter. She and her husband Bill (Ewan McGregor) reside in Boulder, Colorado and are going through a painful separation that no one knows about while mutually struggling to control and understand their 14-year-old daughter Jean (Little Miss Sunshine Oscar nominee and dysfunctional family vet Abigail Breslin). Barbara absolutely loathes returning home and has constantly been at odds with her mother ever since she left many years ago. She holds little tolerance anymore for her mother’s drug addiction or antics. The youngest daughter completing the Weston family is the flighty Florida ditz Karen, played by professional flighty ditz and Oscar nominee Juliette Lewis. Her cluelessness comes blazing into town with her Ferrari-driving sleazeball fiance Steve (Dermot Mulroney).

There is a pecking order of who leans on who in a dysfunctional family. Each of the three Weston daughters approach Violet, Beverly, and coming home in different ways. They were tight growing up, but have evolved and changed since then. Violet is bold enough to admit that any parent that says they don’t have favorites is lying. We see the varying degrees of each daughter’s favor. When support is needed both up and down the family hierarchy, each person involved gravitates to different places to find strength. There’s a constant shift as to who is leaning on who and who is holding other people up.

When it turns out that Bev took his boat out on the lake and drowned himself, this momentary family summit turns into a difficult funeral gathering that is going to require a few days. The last to make the trip in for the occasion is Charlie and Mattie Fae’s clumsy and dimwitted son “Little” Charles, played by the then-up-and-coming Benedict Cumberbatch. All together for the first time in a long time and not for a very pleasant reason, the sometimes hilarious and sometimes awful warts, flaws, secrets, and old arguments of the Weston clan come bubbling back to the surface, perpetuated and punctuated by Violet’s bombastic rule of the roost.

There are unearthed family secrets that should have stayed secret and others that need to be known. Beverly, the father of the family, had always been the calming factor and filter for Violet’s vitriolic behavior.  He kept the family direction positive and dusted conflicts under the rug.  With him passed on, the defensive shield is gone and the filter is off.  The cross-hairs are out.  Old mistakes and hurtful secrets reemerge in multiple directions threatening the already frayed family fabric.  Everyone has scissors, but few bring the fixing needle and thread.

Telling the truth has limits however. Violet sees very few of her overwhelming flaws. She was yelled at and berated as a child and has been at peace with doing the very same with her chance as a parent. Her sister does the same with Little Charles with her endless harping. Both piss and moan about how hard their lives are compared to their offspring. Violet feels that she’s just “truth-telling” and saying what no one else has the gumption to say. She lacks the care of what should or shouldn’t be said for decency’s sake. Everyone, particularly Barbara as the oldest, has their limits of how much “truth-telling” they can swallow before they react, cross the line of parental respect, and fight back with equally hateful words. There’s love in the Weston family, but it’s thickly coated in disdain and disappointment.

Another hurdle in transferring Broadway success to a film adaptation is casting. So many movies based on plays reach too high with big names that swoop in for the artistic street cred as “the one that landed the big juicy part,” but end up not being suitable to the large task that is a dialogue-driven ensemble or the richly created character they are supposed to inhabit. The producers of August: Osage County—which include George Clooney—aimed to conquer where others have failed. They went out and got the big names, but then squeezed absolutely incredible performances from just about every single one of them.

Meryl Streep continued to show why she’s the greatest living actress in the world in this movie. In her usual fashion which we constantly underestimate and disrespect as her “norm,” she adopts and creates such a compelling and electric character with every possible hue and nuance that an actor can provide. She’s the spark that ignites the best of this film’s comedic and dramatic elements. 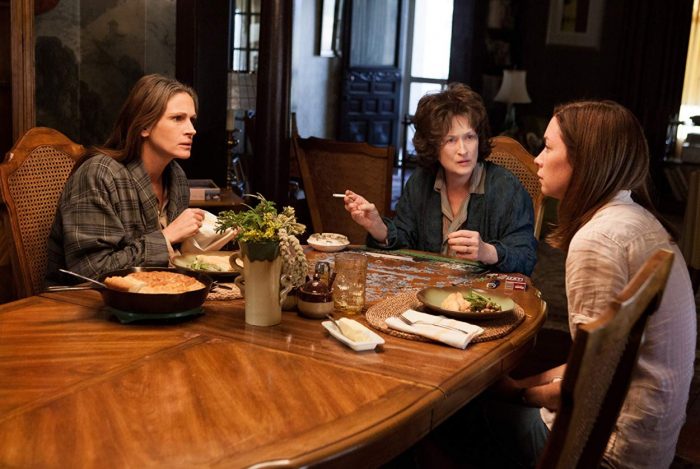 There is one person standing who had the unenviable task of going toe-to-toe with the best in the business.  Believe it or not, Julia Roberts more than held her own with Meryl Streep.  This is a mature and challenging part that involved none of her megawatt smile and America’s sweetheart charm. She sheds that image masterfully and gets as ugly with her words as Meryl does. If Meryl’s Violet is the spark to greatest hits of August: Osage County, Julia’s Barbara is the dry kindling that allows those moments to burn with fiery intensity. As an actress, even with that Erin Brockovich Oscar on her nightstand, this may be arguably the best Julia Roberts has ever been.

The mere presence of these two heavy-hitters raised everyone else’s game within the August: Osage County cast.  Everyone gets their chance to have their loud family spat and flip-out moment and all nail their landings. Margo Martindale and Chris Cooper are perfectly paired oil-versus-water sages of differing tones. Key among the bountiful supporting roles are Julianne Nicholson as Ivy and Benedict Cumberbatch as Little Charles. Both play hopeless romantics who are deeper than their timid exteriors and key to many of the plot twists. Both give substantially solid performances alongside the bigger names. Only Ewan McGregor feels a tad underutilized, especially considering his usual presence and personality. Nevertheless, the end result is an acting fan’s feast from top to bottom. 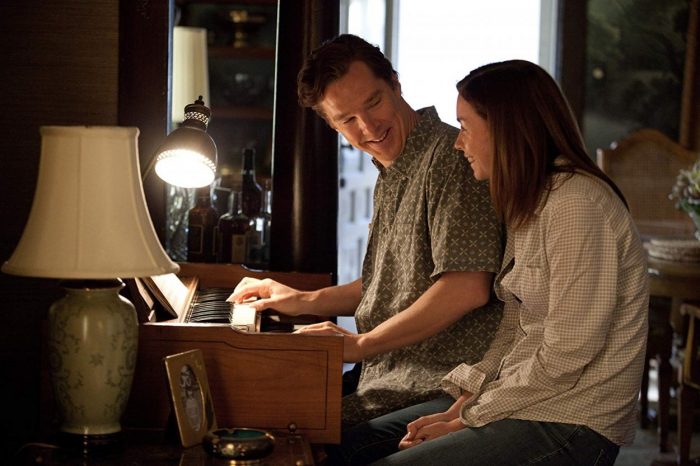 The makers of August: Osage County succeeded in their goal to encapsulate what made the original play such a monster success. Original playwright Tracy Letts adapted his own three-and-a-half-hour play into a streamlined two-hour film for director John Wells. While details and changes were bound to happen, fans of the play should be pleased by the overwhelmingly intact familial tone that has now received a real setting to work with.

Producers bought an actual Pawhuska farmhouse instead of shooting on an L.A. soundstage.  The idyllic property and Oklahoma plains join the human ensemble and successfully hold the closeness and intimacy that gets lost in a play’s translation to film. The signature family funeral dinner scene, shot in the house with everyone on scene, is exactly as paced and written for the film as it was for the play. Not a single line of dialogue was changed. On Broadway, that crucial scene ran twenty minutes and it runs the exact same twenty minutes in the film. 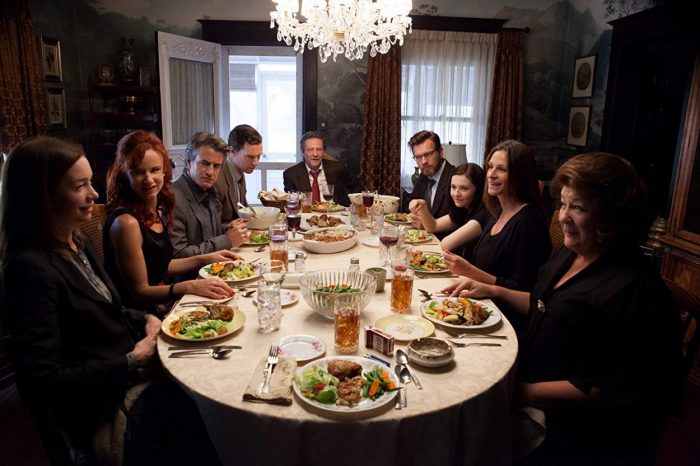 That is just one enormous example of this film’s efforts to retain what made August: Osage County a successful and intimate play. The film is fantastically acted to make this popular story very absorbing. August: Osage County brings an outstanding story peppered with howling laughs and poignant family drama that blend tremendously.