“Puzzles and Games Abound in Twin Peaks Episode 26” is also available in audio-visual format on the 25YL YouTube channel. Join us every day from January 30 to February 28, as we look at every episode of Seasons 1 & 2 for Twin Peaks Month.

Bishop takes pawn. It’s a seemingly simple move. And it’s the one that Windom Earle makes over the course of Twin Peaks Episode 26, “Variations on Relations.” The episode opens at Owl Cave, with Cooper examining what viewers will come to know as the map to the Black Lodge. It’s then that we switch to Windom intensively explaining the Lodges to Leo Johnson and Rusty Tomasky, the latter a literal, unsuspecting pawn. By the end of the episode, a lifesized pawn piece encasing his dead body will be left at the gazebo, a clear message to Cooper that the game is nearing its end, complete with a threatening message: “Next time it will be someone you know.”

While Windom and Cooper’s chess game has been ongoing for many years, Laura’s death could be seen as its own end to a separate chess match with the spirits of the Lodges. As The Return revealed, Laura was a force for good, and for that reason could be seen as the most powerful piece on the board—the King. BOB wanted that power, and since Laura forced his hand into killing her, it became a stalemate.

And while Laura’s match has ended, it feels like many Twin Peaks residents are still stuck in games or puzzles of their own making. Some are more simple than others. All the girls are aflutter over the Miss Twin Peaks contest, and Lana Milford wants her brother-in-law and co-judge Dwayne to ensure she wins. On the other end of the spectrum, Bobby wants a reluctant Shelly to enter so he can put the prize money to good use. Donna Hayward also enters the contest, making her motives clear to her parents, dancing around the truth that her mother had an affair with Benjamin Horne.

Donna, along with Shelly and Audrey, were all given a piece of a poem:

And the waves clasp one another;

No sister-flower would be forgiven

If it disdained its brother.

Cooper spends a good portion of the episode figuring out its intention—in this case, it’s the poem he gave to Caroline Earle, and after comparing handwriting, deduces that Windom had Leo write and deliver the notes to the girls as a warning to Cooper that he’s drawing closer—and might hurt more innocent people.

There’s also the mysterious puzzle box Catherine Martell is trying to open upon Josie’s disappearance. She pulled Pete Martell away from his own chess game and poetic musings on Josie in hopes of opening it. It isn’t until Sheriff Harry Truman arrives that they all discover it opens by being dropped—only to reveal a smaller box featuring the moon cycle paired with astrological symbols.

Interestingly enough, the moon also appears in a vision Major Briggs has when Cooper asks him about Project Bluebook. The entire vision features a hooded figure (or dugpa, which Windom mentions earlier in the episode), the moon, an owl, and fire—all elements that tie in with the Lodges and their power. It’s after this vision and weighing of the moral consequences at stake (more people being killed) that Briggs agrees to tell Cooper what he knows.

Love is Hell or Heaven

While the mystical elements related to the Lodges are aligning, the theme of love remains at the forefront. One standout scene takes place fireside at the Great Northern. Cooper is drinking a glass of milk, but John Justice Wheeler needs something stronger. Both are at different stages of being lovelorn, and Wheeler’s got it bad for Audrey (who’s in Seattle)—he’s a pawn of love. He reckons that love is hell, but Cooper reminds him that the Hindus considered love “a ladder to heaven.” Wheeler isn’t too sure the path isn’t paved with coals, but both seem sure that love is worth the risks.

While Audrey’s name is never spoken between them and she’s physically absent from the episode, this feels in many ways like a final hand-off of sorts, a queen sacrifice. Cooper has cooled her affections by now, so Wheeler isn’t intruding here. Although many a fan will pine for Cooper and Audrey and what could have been forever, Wheeler is a solid if stereotypical “soap opera leading man” sort of choice. To see him pine for Audrey in the way Cooper couldn’t allow himself to is comforting (and Billy Zane’s not bad for a runner-up, honestly). It’s also the moment that Cooper reveals his heart “has been locked away long enough.” 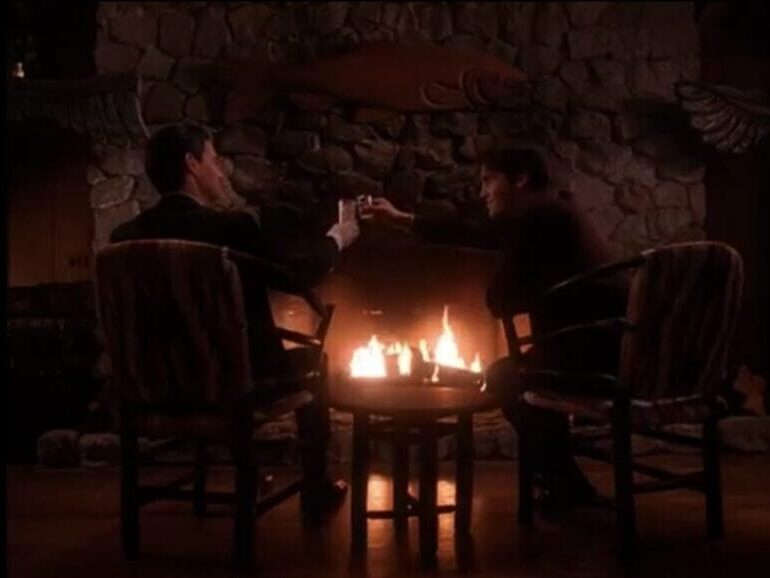 Cooper’s gaze has shifted to Annie Blackburn, a waitress at the Double R. When he invites her on a nature study, it’s revealed that Annie has been struggling with her own demons for some time and, after a suicide attempt, ended up in a convent.

Annie: I want to come back to the world. I was so frightened for so long. Of everything. Of life. I thought I’d be safe there…to think if I could remove myself as if that could stop the noise in my head when the problem was me, it was always in…me…

On the surface, this feels like a lovely, revealing moment between two new people in love. But as the scene unfolds, more of Cooper’s own darkness becomes apparent.

Cooper: I know how hopeless things can seem. I know the kind of dark tunnel you can fall into…I…I had a similar experience. Not the same. Similar. I’d like to…help you…in any way I can…

This foreshadows the darkness Cooper will fail to face in the Lodge at the end of this season, and how that fear for Annie’s safety and Caroline’s death haunts him. There are multiple theories about who Annie actually is in terms of drawing Cooper in and whether she’s manipulated by the Lodges or just dumb fate. Regardless, understanding her fears and their power is what has brought her back to Twin Peaks in the first place. She was a pawn of fear, but she’s learning to play the game and get back on the board.

As Annie says during the boat ride, which Cooper ends up finishing, “Running away from my fear didn’t make the fear go away…It made it stronger.” Annie knows that facing her fear will be the only thing that gives her peace: “And I have to do it here. Where everything went so wrong.”

And while Annie’s convenient return to Twin Peaks is the perfect entanglement for Cooper’s “white knight” leanings, Annie becomes just one of the many lost pawns in Cooper’s life. Caroline was the first, making Annie second. But then there’s Diane’s heart-wrenching and harrowing confrontation with Mr. C, as well as her sex-magic goodbye with the real Cooper in The Return that makes three. No matter who he tries to save—even Laura Palmer/Carrie Page—he fails, despite his best intentions. (Maybe pressing pause on Audrey’s flirtations was for the best, even if it makes Wheeler a different sort of pawn.)

Cooper’s journey out of the Lodges and fixing his fractured selves makes up the bulk of The Return‘s plot, but it’s important we focus on those he’s hurt in the process of trying to set things right. Every woman Cooper becomes entangled with pays the price in one way or another. Caroline dies, Diane chain-smokes and drinks vodka like it’s water. And Annie! She’s been a polarizing punch line, a 25-years-unanswered call of “How’s Annie?” and a blood-splattered spirit uttering a warning in Laura Palmer’s bed in Fire Walk with Me. In The Final Dossier, she’s catatonic except for the annual “I’m fine.” For all her bravery in trying to push past her fears, she’s literally back to starting positions on the chessboard.

Twin Peaks is a town where a lot goes wrong for both good and bad people. In this episode, so many characters intersect, which as the finale grows closer feels appropriate. And Dick’s pompous wine-tasting offers a slight reprieve from the darker elements of the episode.

But out of all those shared moments, there’s one that’s ridiculously iconic, and I’d be remiss not to mention it here: Bobby catching a besotted Gordon Cole kiss Shelly in the Double R. FBI agents falling in love with small-town waitresses feels like one of Twin Peaks’ biggest tropes, and for a Mark Frost-penned episode, this is literally the David Lynchian moment. It’s equal parts heartwarming and hysterical (although sadly at Bobby’s expense):

Cole: “YOU ARE WITNESSING A FRONT THREE-QUARTER VIEW OF TWO ADULTS SHARING A TENDER MOMENT.” 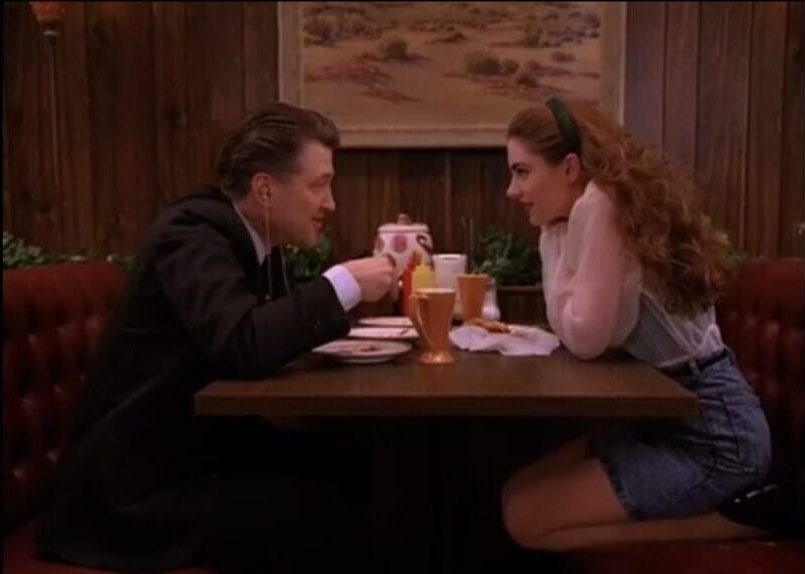 From here on out, Twin Peaks won’t be tender. All the players will take their turns, either searching for truth or living their well-woven lies. In a way, they’re all pawns for what will transpire, even if Laura’s death was the true stalemate—and the start of a new game between the Lodges.