“Fear and Love Open the Door in Twin Peaks Episode 27” is also available in audio-visual format on the 25YL YouTube channel. Join us every day from January 30 to February 28, as we look at every episode of Seasons 1 & 2 for Twin Peaks Month.

What happened to Josie, Coop? By Twin Peaks Episode 27, she’s gone, though Pete says that he sees her face during a brief scene wherein he stares at the wall of the Great Northern…or is it just that painting on the mantel?

The most reasonable hypothesis seems to be that fear killed her (if we can call that reasonable). Certainly, she was overwhelmed by it. But that’s in the past now, and despite the visage of BOB appearing before him to taunt him about what happened, Dale doesn’t seem particularly bothered by the event. Rather, he’s set his mind to discovering the secrets of the Lodge, and is his fascination with it (and BOB, or the evil that men do) ultimately that different from Windom Earle’s?

Episode 27 is where we see Earle on tape ranting about his Project Blue Book work and dugpas, who cultivate evil for the sake of evil. I’m tempted to say this is a misunderstanding—both on Windom’s part and on that of the dugpas—but that’s only because I don’t feel we see any beings who do this in Twin Peaks. Perhaps the Woodsmen? Or perhaps we never see these dugpas at all…

It won’t be until later that Major Briggs, still reeling from the shot of haloperidol Earle gives him, blathers that fear and love open the door, but these words nonetheless evoke what I find to be the theme of Episode 27.

We see the door open in the closing scenes, as BOB first reaches out an arm and then emerges in Glastonbury Grove, but we see fear and love throughout, from the opening lamentation of the death of the inimitable Rusty Tomaski to the end of the affair between Audrey and John Justice Wheeler, Bobby and Shelly reconciling at the Double R, Lucy telling Andy she’s going to decide who the father of her child is, Ben Horne striving to do the right thing, the burgeoning romance between Cooper and Annie, Lana manipulating Dwayne, and Leo revolting at the notion of Shelly’s life being in peril. 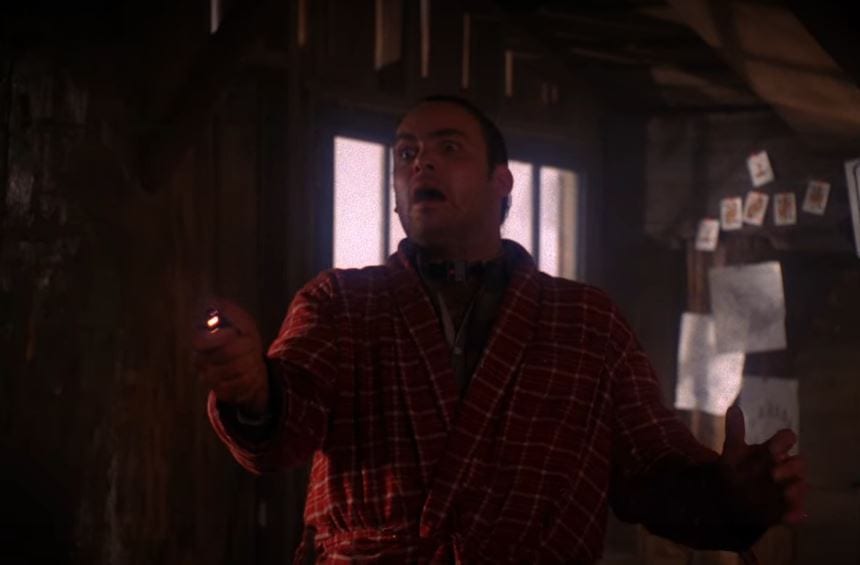 Oh Garland, Please, I Shall Weep

If there are good guys in Twin Peaks, I don’t think it can be denied that John Justice Wheeler is one of them. He may even be the best guy. He helps Ben Horne pursue his desire to do the right thing, and I’m certain that he would have loved Audrey tender for the rest of their lives if only he’d been given the chance.

Of course, it’s true that Ben’s journey leads to disastrous results, as Episode 29 will last see him bleeding on the floor of the Hayward residence, but it must be noted that by that time Jack is no longer around to guide him. And the reason is his commitment to his friend—nay, partner—who has been murdered in Brazil. John Justice Wheeler left Twin Peaks with every intention of coming back.

My hypothesis is that he doesn’t because he himself is murdered—and by none other than Mr. C. I have to recognize that the evidence for this is a bit thin. It’s really all based on the photo that Albert shows to Gordon of Mr. C in Rio, but we can add to that a healthy dose of speculation in terms of how this all would fit with the facts we are presented with about what Mr. C has been up to for the past 25 years. Where, for example, did he get his money? My conjecture is that it was through murder and the acquisition of Jack’s business interests. Plus it would be no good to have John Justice Wheeler out there in the world, given what Mr. C did to the woman he loves. Surely he’d come to Audrey’s aid, but he doesn’t. He leaves Twin Peaks in Episode 27, and we never hear of him again. 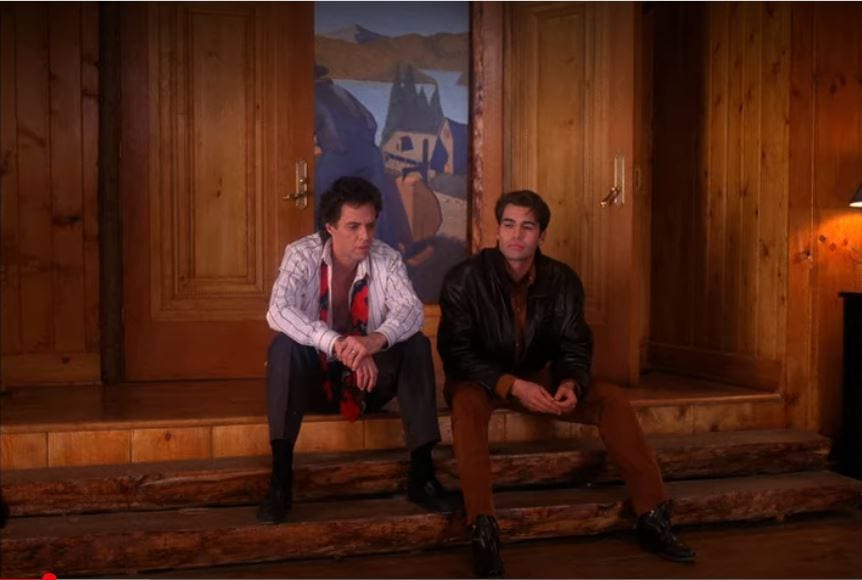 Bobby tells Shelly that his brain rolled over when he saw Gordon Cole kissing her—something snapped. He’d been strutting around in a suit like he was better than everyone else, but now he knows that what he truly wants is to be with her.

It’s his fear that makes him realize his love for Shelly (and we might say the same thing about Leo when it comes down to it), but it is also the case that over the course of the back half of Season 2 we see Bobby Briggs maturing into the man that Garland describes in his vision. It’s not a dream, and not a prophecy of the future in actuality, but an insight into who Bobby is in his soul.

We see this man in The Return, and it’s no surprise that Bobby has by then become the best kind of cop. We see the way that he cares for his daughter Becky, and how he continues to care for Shelly, even though they are by then apart.

It’s heartwrenching to see, especially in light of scenes like this one in Episode 27, that things between Bobby and Shelly won’t work out. In her relationship with Red, which in fairness is only hinted at in The Return, we can see resonances with what drew her to Leo. It’s not just love. Perhaps love is not enough.

A Fish I Don’t Particularly Care For

Twin Peaks Episode 27 ends with BOB emerging from Glastonbury Grove—first his arm, and then his whole body comes through what one might be tempted to call a slit in reality. This image of his denim-clad arm thrusting into the night came to mind for many of us when, some 25 years later, we saw Gordon Cole doodling on a hotel napkin in Buckhorn, South Dakota. 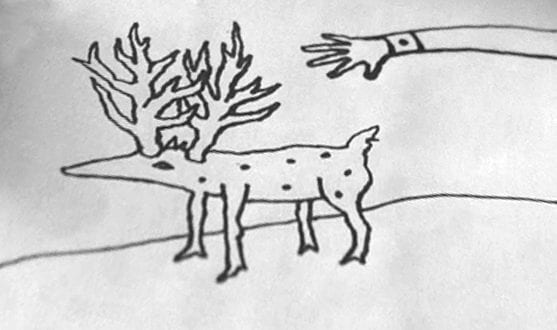 This is only one of many indications The Return gives that Cole is attuned to what we shall call, for the sake of convenience, the forces of the Lodge. In Episode 27, BOB’s appearance would seem to be likewise presaged by several shaking arms that appear over its course. The first is that of an unfamiliar woman in the midst of dining at the Double R, but this is followed by an occurrence involving Pete and one involving Dale Cooper.

Neither seems particularly disturbed when they lose control of their right arms. It is only for a moment, after all, but more deeply I’d suggest this relates to how both Dale and Pete are open to things wonderful and strange. It’s not that they don’t question them, but that they do—they interrogate these aspects of reality that others push aside.

Pete sees Josie’s face, and Coop sees the Giant appear on the stage of the Roadhouse, warning against Annie’s entrance into Miss Twin Peaks. But that slips away from our dear Dale as well. There are warning signs everywhere, like the broken dishes on the floor of the Double R—a catastrophe of coffee and pie. 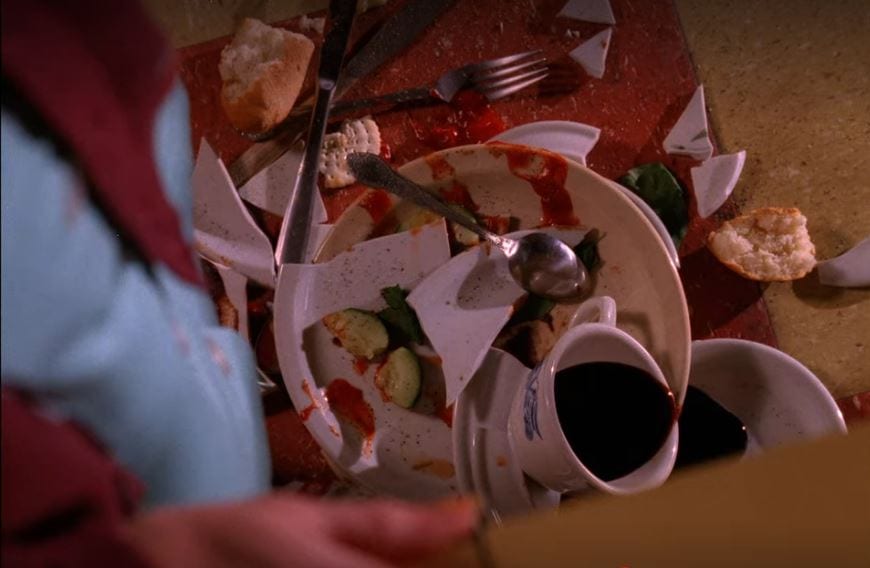 Dale continues to make the mistake of thinking that this is all about him, or that he is in something like a privileged position when it comes to fighting against Windom’s goals with regard to the Lodge or figuring things out, even after he’s noted that this is a red herring.

In one regard, that hubris will continue all the way through The Return, but in another, we’ll see Dale come to reject his own happiness. This is what his doppelganger mocks at the end of Episode 29. Caring about Annie was Cooper caring about himself, and look where that got him. And so he’ll make a tulpa to embody that impetus to satisfaction—Dougie Jones (the OGD)—and Mr. C will become pure desire detached from its end. And this is what seems off when Cooper-Dougie arises from his coma in Part 14: he’s missing these aspects of himself.

Why isn’t Annie in The Return? Why doesn’t Cooper immediately inquire as to her wellbeing, or even do so at all? It’s because he no longer cares but rather views the Dale we see in Episode 27 as hopelessly naïve, failing to see the clues right in front of his face. His hand shakes as he stands at the window waxing poetic about Annie, and it hardly registers. Later, he seems to forget the Giant’s warning as soon as he sees Annie’s face.

Dale will ultimately learn a lesson from all of this, but it’s one that will turn him cold. He has more important things to worry about than Annie Blackburn…besides, she’s fine.

Did he love her? Sure, but love is not enough. It opens Dale to fear and leads him to face the dweller on the threshold with imperfect courage. Love and fear open the door. Perhaps this is not an either/or—perhaps it requires both, as they come entangled together. Perhaps the idea that love conquers all is the ultimate red herring.