Very much estranged from its source biography, CBS All-Access’ Strange Angel, directed by David Lowery feels like Disney’s The Rocketeer or Martin Scorcese’s The Aviator meets Stanley Kubrick’s Eyes Wide Shut. Influenced by rocketry, pulp fictions, and the occult alike, this series is the story of one of America’s greatest success enigmas: Jack Parsons. This season attempts to balance his story with that of his wife—Susan (not Helen) in this story—though at its center is his ambition and ultimate corruption. Robert Lloyd of the L.A. Times tracks the identity changes from the biography in his excellent write up, and I encourage you to reference it to see the differences: http://www.latimes.com/entertainment/tv/la-et-st-strange-angel-review-20180611-story.html.

The series opens with a seemingly blood-soaked moon—red-filtering will signify pulp fiction adventure and occult-inspiration. A foot suddenly disturbs the scene, splashing what we realize is a puddle reflection, a scene reminiscent of Twin Peaks’ Bang Bang Bar neon sign similarly reflected in a parking lot puddle and disturbed by a boot stomp in Showtime’s Twin Peaks: A Limited Event Series. In the red-hue of the scene, a hunting samurai explains “The beast went this way.” And while he references the hulking wolf of his adventure, we understand the nod to “The Great Beast” on Jack Parsons’s horizon, the notorious Aleister Crowley.

Jack Parsons lived from 1914-1952. Alongside his early successes, pulp fiction would have its heyday, with Weird Tales producing stories from the likes of Robert E. Howard, H.P. Lovecraft, and Clark Ashton Smith. Certainly Jack Parsons would have been influenced in his cosmic ambitions by the stories of Edgar Rice Burroughs’s John Carter from Mars. In this particular pulp adventure, the samurai launches an arrow at the gargantuan beast, and we follow that arrow, which represents the grand propulsion of a launched object for Parsons’s own future. When Jack is stirred from his immersion in fictionalized pulp magazine The Amazing and True, a likely nod to Amazing Stories, and the further fictionalized story titled “The Path of the Hunter” by a non-existent Christopher Dexter, we learn that he is simply a janitor, stealing black powder for his own experiments. Asked by his colleagues to join them for a drink, he explains that he has something else to do, and we’re given the appropriately-fitted and hokey dialogue: “What’s her name?” Jack: “Destiny.” As he and his friend, Richard Onsted, optimistically test their rocket, they chant the popular Latin phrase “Ad astra per aspera,”, meaning “through hardship to the stars”. It is well applied here, and I note a favorite sign-off in correspondence of another science fiction author, William S. Burroughs. 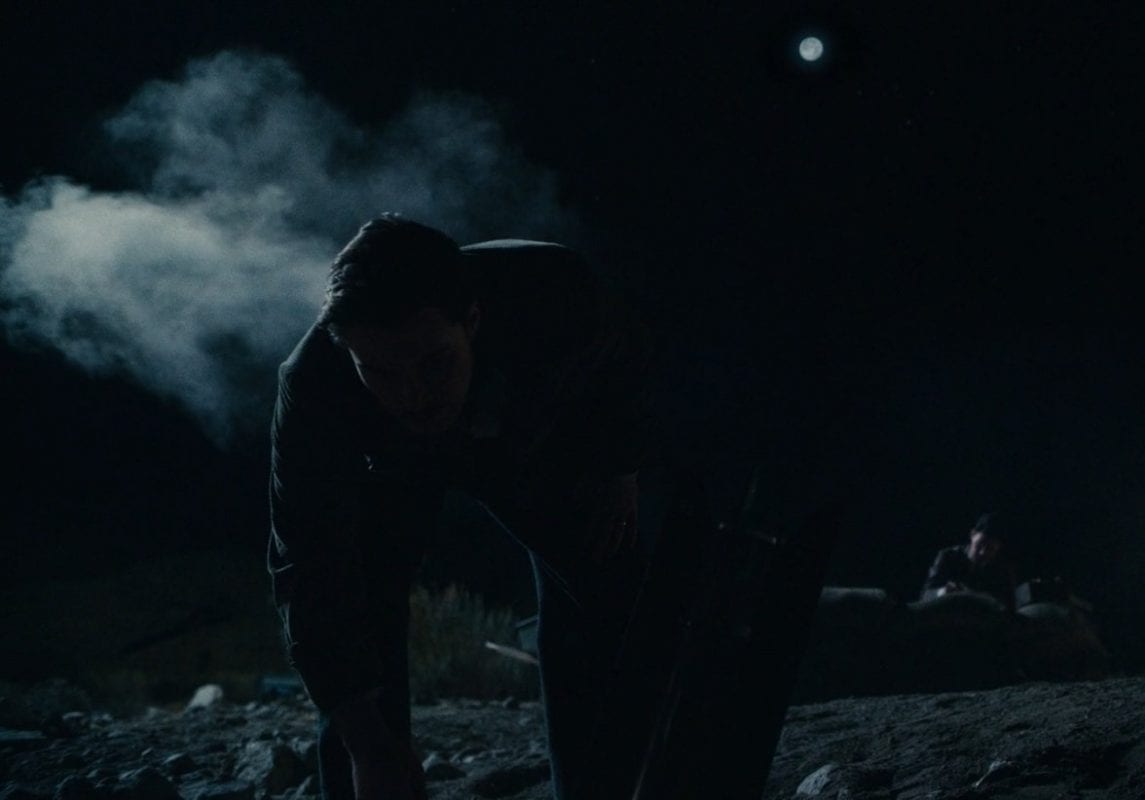 There is a second reference for Jack Parsons’s life titled Sex and Rockets, a combination we’ve seen before in Thomas Pynchon’s Gravity’s Rainbow, which also uses Occult imagery to color the evil mechanics behind warfare rockets. Still, while this first rocket test is only a slight success by Parsons’s standards, it is still a slight of magic, and we see a small and distant full moon behind him, foreshadowing a Moonchild in the conjuring. This far in, we finally see the opening title.

Ten minutes into the episode, and Jack is dressed up and walking into Graduate Aeronautical Laboratory. As he stands in a man-made wind tunnel, it is his Howard Hughes profile moment, chest out proud, looking out toward a hopeful future. Of course, this set-up will give us a dramatic turn of innocence into corruption, and of course, he must wrestle with disapproving academia, this self-made genius with his nose in the pulp zines. His new neighbor, a goat-toting eccentric, is the force of change and suggestion in this caricature of Jack Parsons. Admittedly, the neighbor’s influence feels a bit forced, like a heavy hand on our backs pressing us forward too fast. I suspect the catalyst is needed, though, if we are to be pulled out of the science and into the Thelemic. We are also brought back into the red-filtered pulp adventure of the hunter, and it was hard to not also associate that red with Marjorie’s hair in Kenneth Anger’s films.

For this first episode, the character of Parsons is a fettered one, wholesome and in control. His sense of his father’s absence, which is prominent in the biography of the same title feels absent here. Perhaps it was not deemed a dramatic enough impetus, given our pacing here, which does not altogether need to be a poor decision. Parsons will be woken by his eccentric neighbor’s restless noise, where he follows him to his first pagan ritual. The scene is of the mock-penitent on knees in a room, where a red robed leader takes a dagger to a scantily-clad woman. We’ve seen the scene many times, with Ra’s al Ghul in Batman cartoons, in Indiana Jones and the Temple of Doom. The point is that this feels less Thelemic in nature and more like one of Parsons’s pulp stories, which I find to be a rather inspired crossover. Still, the chant is the correct one: “Do what thou wilt.” 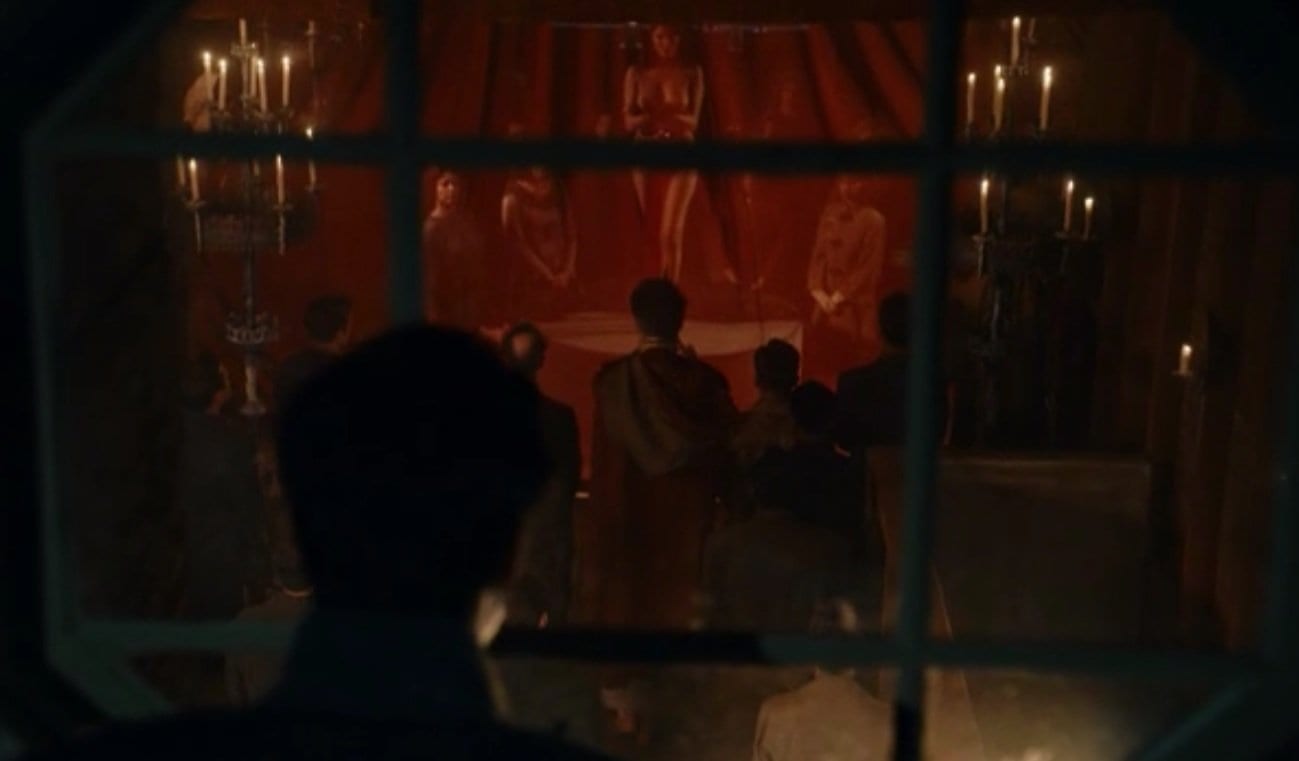 Then, we have to admit the other principles at play here. Alchemy is the obvious connection to Jack’s uncanny understanding of rocket fuels. He triumphantly proves the disapproving professor wrong. As his final fuel test in this episode succeeds, we see the projected arrow from the beginning played out here as shrapnel rockets toward Jack, who is saved by Richard. There are some wins here. Mark Heyman was given quite a task to take what is already such an unbelievable biography and make the character’s early development as interesting as his future in the occult. Avid fans of Jack Parsons may disagree, though. While it is easy to admire the nods and clever writing by Heyman, there is gritty reality missing. If I can stop and appreciate a pulp fiction story of a golly-gee, self-made scientist getting in over his head, where he will stumble into the intersection of magic, science, sex, and evil, I can appreciate this iteration of Strange Angel. If I wanted the biography played out on screen, though, I would be sorely disappointed and frustrated by the cleverness. Still, this is only a first episode, and I have hopes that this story can develop to make the latter an immersive experience. That given, 25 Years Later has had a year of articles that fully delve into Parsons’s more fascinating characteristics and influences. Please see some of those below, and I’ll check back in with you mid-season to let you know how this series is progressing for me.