During the initial airing of The Return, I found Part 12 to be the most disappointing. Lots of long, slow scenes; very little Kyle MacLachlan, and then the short-lived excitement of seeing Audrey for the first time turn into a big let-down.

So heading into Part 13, I hoped things would get back on track. And at the time, while I thought it was a step in the right direction, I came out a bit frustrated once again, as many of the storylines don’t progress a great ton.

But now knowing how everything wraps up, it makes it a lot easier to appreciate some of the great moments of Part 13, which combine humor, horror, absurdity, and some great call-backs to the Twin Peaks from twenty five years ago. I’m able to enjoy this episode a lot more than when it originally aired.

Part 13 opens by bringing us back to Dougie and the Mitchum brothers, literally dancing through the halls of Lucky 7 Insurance. It’s a lighthearted, funny scene that helps kick off an explanation of Anthony Sinclair’s involvement with Mr. Todd (and interestingly, the Las Vegas police).

Things segue back to Dougie’s home life with Janey E and Sonny Jim, and we are treated to one of my favorite parts of the entire Return: Sonny Jim’s gym set! 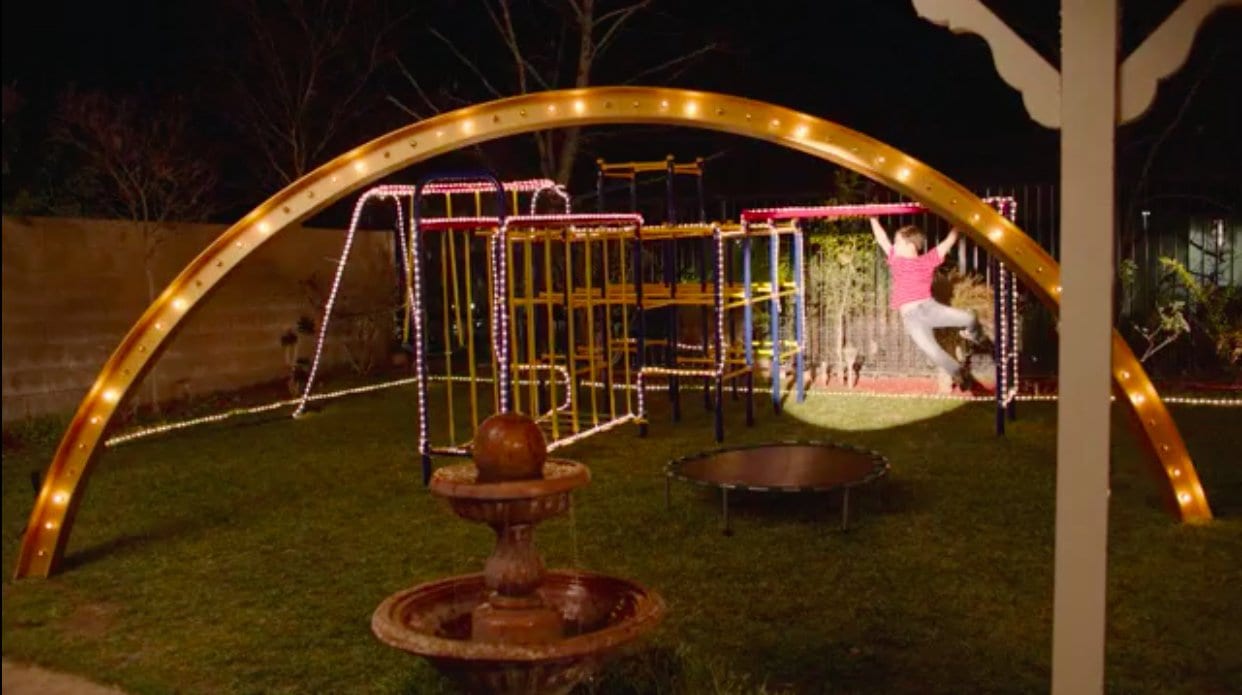 I cannot understate how much I enjoy the scene with Sonny Jim pinballing around his gym set. The lights, the trampoline, the dashing spotlight. If you throw David Lynch and a kid’s jungle gym into a mixing bowl, this is exactly what you’d get.

The scene perfectly exemplifies a child’s imagination. As a kid, an imaginary fort isn’t merely a pile of pillows and some cardboard boxes. It was a thing of wonder and safety. Sonny Jim’s gym set is like that.

From this beautiful scene, we are taken to a very contrasting environment, as Mr. C arrives at the Farm — the hideout of a gang of arm wrestlers — having a score to settle with his pal Ray. (This by the way is the first time we see Mr. C since Part 9.)

On the surface, this portion of the story sounds a little ridiculous: Mr. C is challenged to an arm wrestling match, in which if he loses he will have to do what the gang says — and if he wins, he becomes the leader.

“What is this — kindergarten?” Mr. C asks. No kidding.

But the scene elevates above the absurdity and ends up being one of the more memorable parts of The Return.

If we had any questions about Mr. C’s power after being shot by Ray and being brought back to life by the Woodsmen (and is BOB still in there?), the arm wrestling match against gang leader Renzo answers them.

After toying with Renzo in the match, Mr. C easily overpowers him and then finishes him off with a power punch to the nose, killing him — possibly foreshadowing Mr. C’s and BOB’s destruction at the hands of Freddie’s power glove in the finale.

I still find the arm wrestling match scene to be very intense, even knowing the outcome now. I also love how this scene causes its own wrestling match within my head while watching. Do I want Mr. C to win the match? (Yes!) Should I? (Probably not!)

After the match, we get a mysterious confrontation between Ray and Mr. C. Ray, who we later learn has been working with the FBI, says he has been in contact with Phillip Jeffries but has only talked to him on the phone.

Is Ray telling the truth here? Does he “know” the Phillip Jeffries — or what he is — that we see later in the series?

We also get another green ring sighting, last seen when Dougie travels to the Black Lodge. Ray says he received the ring from a prison guard he had never seen before? Who was this person? Someone from the Lodge, I’m guessing.

As always, the ring is surrounded in mystery.

Before being shot, Ray hands over a piece of paper that supposedly shows the coordinates that Mr. C wants (or, more accurately, needs). He says they are from Hastings’ secretary Betty, but they are likely an attempted trap.

But perhaps most importantly to Mr. C, Ray gives up where Phillip Jeffries is hanging out — The Dutchman’s, a place we will see later on.

One of the most important aspects of Part 13 is that it shows us we are most certainly dealing with timelines that are out of order. There have been signs of this already in the season, such as when Hawk and the Log Lady have their first phone conversation and he wanders into the woods, or in Part 7 when the man asks if anyone has seen Bing in the Double R Diner. And of course, there’s the “Is this future or is this past?” line.

But in Part 13, we see some more convincing evidence.

The episode opens with Dougie still partying with the Bothers Mitchum. But in Part 12, Dougie and Sonny Jim are in the back yard playing catch. That scene clearly took place at some other time, and before the gym set arrives.

The next instance occurs when Bobby meets Norma and Big Ed in the Double R. (Wasn’t this GREAT to see, by the way?) Bobby tells them he found the message left by his father “today.” I think we can assume this scene, the scene when Hawk and Sheriff Frank Truman are looking at Hawk’s map in Part 11, and the scene where they open Major Briggs’ note in Part 9 all take place on the same day. However, in between those scenes, we have seen Bobby at the Double R with Shelly and Becky when the diner is shot up. And Hawk went to check on Sarah Palmer’s house. These scenes took place on different days, hence some out-of-order storytelling. Or possibly alternate universes.

But perhaps the most flashing-red-light example that time is out of sorts comes from the scene with Sarah Palmer sitting in her living room, drinking Bloody Marys and watching a boxing match. The television is caught on a loop:

Oh, the right hand catches the big guy by the ear!

And he finally goes down, hangs on to the ropes.

Oh, the gentleman asks him if he’s OK.

Looks like, uh, round number one and two under way.

It’s hard to tell what is actually going on here; Sarah doesn’t seem alarmed by the fact that the boxing match keeps repeating every 15 seconds or so. Why is she watching an old boxing match, anyway? I think the main takeaway from this scene is that it’s telling us we are not on a level timeline during The Return. And if we had inklings of this during previous episodes, we know it for sure now.

What Story is That, Charlie?

After the confusing debut appearance of Audrey and her husband Charlie (along with mentioning of a slew of other names — Billy, Tina, Paul, and Chuck — in Episode 12), I initially half-thought/half-feared this would be all we would see of her. However, she returns again in Part 13. Once again is promise of going to the Roadhouse, and once again Audrey ends up not going.

Audrey says she feels like she’s somewhere else and that she’s somebody else. “I’m not sure who I am, but I’m not me.”

During the initial run, I thought the first scene with Audrey had to be some sort of dream. But the scene in Part 13 leads me to believe this is all created in her head, not necessarily in a dream, and I thought perhaps Charlie might have been her therapist. We are told in The Final Dossier that Charlie is indeed Audrey’s husband, but I think it’s possible she could be conflating Charlie with a therapist in these scenes. And from what we see later in the series and are told in The Final Dossier, I believe Audrey is in a psychiatric hospital — possibly due to trauma caused by Mr. C and the fallout from the bank explosion.

I find the closing scene of this episode downright chilling. During first watch, I thought it was merely Big Ed enjoying some soup, reflecting on how he has messed things up with Norma once again. 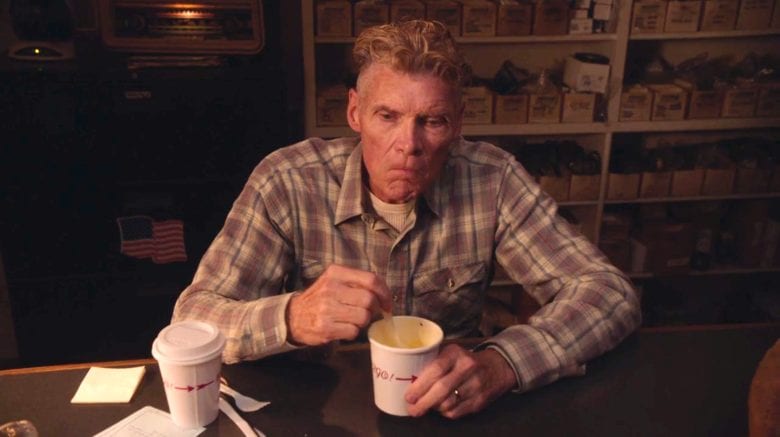 Also, the scene definitely gives me a Woodsmen type vibe with the old-style radio behind Ed and the gas pumps looking similar to the Convenience Store. And then when Big Ed burns a piece of paper as the credits role (a note to Norma perhaps?), you can’t help but ask: “Gotta light?”