There are few social media accounts that I believe successfully connect my odd sense of humor with my love of Twin Peaks and David Lynch. Eric Allen Hatch is a meme-generating genius whose love of David Lynch is poured into each of his creations. Through his Twitter and Instagram accounts, he simultaneously takes some not-so-subtle shots at those who wanted Season 3 to be a tied-with-a-bow nostaglia trip, mashes BOB and Mary Poppins, and creates a Phillip Jeffries version of the Distracted Boyfriend Meme.

It was like being a dreamer inside of a dream for me when Eric agreed to become part of the Living Novel, so please stop sitting in your feelings about Twin Peaks, have a little fun, and meet this wildly entertaining and twisted Twin Peaks fanatic. Enjoy!

Incredible but true: Tom Cruise was the same age while making Mission Impossible: Fallout as Harry Dean Stanton was when filming his scenes for Twin Peaks: The Return pic.twitter.com/CTYoBIdLB3

Tell me in detail about your first experience with Twin Peaks and what impact that had on you as a television viewer and a person:

It was huge for me. I grew up without a television in the house; my parents wanted me reading and playing outside (which I was down with) and going to church (which I wasn’t). My dad loved classic films, though, and eventually bought a TV and VCR to use to rent old movies. I was a teenager when Twin Peaks came out and defiantly made it the first television show I watched. I’d read an article in some magazine my parents subscribed to (Newsweek, of all places, if I remember correctly) about David Lynch and knew this would connect with me. Other than the first time I listened to Pixies around the same age, there’s never been a moment in my life where a work of culture so exactly fulfilled what I expected and needed from it based on its description. I watched each episode of the first two seasons live, on their air dates. It was the first show for which I’d ever done that. The opening scene, the music, the characters, even (maybe even especially) the credit sequence fired up my imagination; I hung on every frame. I was a bullied kid and a misfit, and It’s maybe just barely an exaggeration to say Twin Peaks kept me alive through high school.

I’ve written more about growing up without a television and the extra power moving images had for me in an essay called “Cinema Without Safety Goggles” for Metrograph.

Did you watch Season 3 live as it unfolded each week?

Yes, I watched each one live, in a variety of places. A musician friend who has a nice projector and screen in a room that can hold a dozen comfortably hosted for our friend group many Sundays, including kicking things off with the first two episodes on week one. He was on tour for some Sundays, so I grabbed a free Showtime trial and hosted a smaller group a few nights. And then, at the time of the last two episodes, I was working for a historic theater (that looks quite a bit like the one from Mulholland Drive, as a matter of fact), and we had a private screening party on the big screen. That was an unforgettable experience, the perfect atmosphere for those shattering images. Part 17 was full of high spirits and triumphant hooting and fist-pumping; Part 18 was devastating, with lots of gasps and moans and crushed spirits.

I loved Season 3 from the get-go. I was so ready for him to take the universe in a different direction. I think Fire Walk With Me was largely despised at the time because it represented a first experiment in the even darker and more fractured narrative techniques that Lynch would go on to explore further in Lost Highway and Mulholland Drive, which was not what a lot of viewers wanted done with these beloved, “quirky” characters. But it’s rightfully settled in as a classic work, and with that precedent I was ready for Lynch and Frost to show us not a nostalgia trip, what rather they could do with Twin Peaks now as artists who have continued to evolve. Certainly, there are moments that show they’re still capable of taking us back to the old Twin Peaks (literally and figuratively) but I’m glad this was not the core of what it was about. I was thrilled by the scenes of the shovels being spray-painted, for instance and somewhat disappointed by those scenes having an eventual explanation. I like Twin Peaks best when its imagery unsettles me and stretches my mind in ways that defy logical explanation.

There were a few bumps and moments of exhaustion along the way. A few friends fell off as viewers, especially women who understandably despised the extreme sexual violence the series frequently depicts. But most of us kept coming back. Parts 8 and 18 are two of the greatest hours in cinema history, and I’m already looking forward to seeing the whole series again soon!

Old Twin Peaks: Have some pie while you solve crimes

New Twin Peaks: Vomit up creamed corn while atomic hobos drag you to hell, you fuck

I don’t own a car by choice, I’m no good with costumes, and I have no tattoos. So I guess it’s just memes for me! I collected my “greatest hits” of Twin Peaks content here: 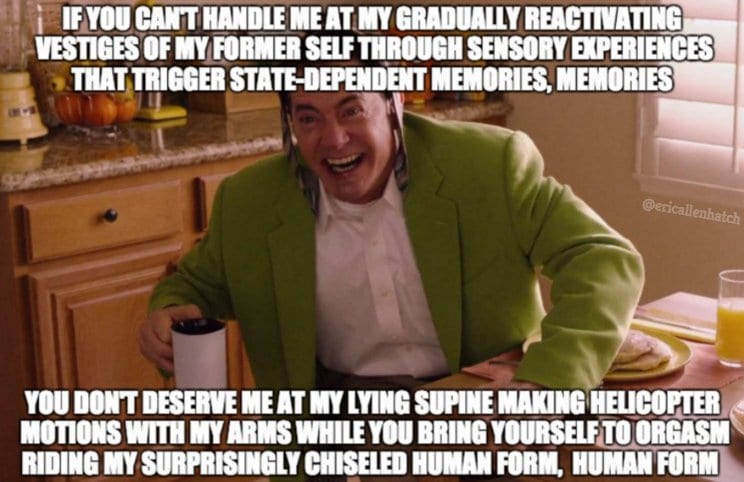 Have you ever converted anyone into a Twin Peaks fan?

I’ve had a few people comment that my memes made them interested in watching, and/or revived their interest at a moment where they had been thinking about giving up on The Return.

This is the water, and this is the well. Drink full, and descend. The horse is the white of the eyes, and dark within. pic.twitter.com/VKdAPQEPzW

What is your favorite scene from any part of Twin Peaks and why?

Watching the first two seasons live as a teenager, I was thrilled by the big plot moments: the reveal of Laura’s killer, the killer driving around with a certain character’s corpse in their trunk, the chaos and mayhem of the last episode. And while as an adult I more enjoy soaking up the atmosphere of the initial seasons, with The Return, I have to go with the mother of all big moments: “What year is this?”

It sinks in deeper and deeper each time I think about it, not only making me rethink everything that came before it, but also making me believe David Lynch sees and comprehends some larger truths about human existence and the multiverse than the rest of us have grasped yet.

I’ve talked to a few of my Twin Peaks social media-savvy friends in person about your work on Twitter, always encouraging them to seek you out. Most already follow you, and on more than one occasion, we’ve had belly laughs recounting your work. Where did the inspiration for Twin Peaks memes come from? When did you start? Which are some of your personal favorites?

That’s really great to hear, thanks! I had a year or two as a casual, earnest Twitter user before I started meme-in’. But by 2014, I was creating a lot of content that tried to engage with film culture in an irreverent way that attempted to probe the limits of what you can express online, and/or satirize the way online discussion can diminish great works. Sometimes this meant lewd tweets about canonical works, sometimes purposefully grandiose tweets about “lowbrow” films like Paul Blart; sometimes, especially in the era of the 140-characters limit, maximalist tweets that tried to say more than seemed one might imagine possible within those limitations like this one about Mulholland Drive. When a new meme format comes along, I try to both use it and turn it inside-out for my own dark corner of film twitter’s purposes. So by the time The Return came about, I was well-practiced at using memes to process my reactions to moving images, and sort of went to town. As far as favorites go, I like my Seinfeld: The Return, which is both funny and has some clever Photoshop details, and this take on “What Year Is It?” which both brought some dark laughs and helped me process and come to my own understanding about the show’s “conclusion.”

I’m @ericallenhatch on Twitter, Instagram, and Patreon… or, if you’re exclusively in it for Twin Peaks content, check out my Fire Walk With Meme “greatest hits.” 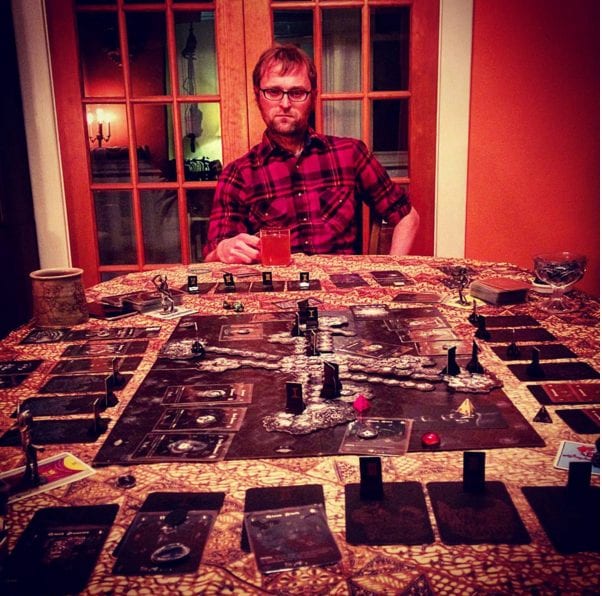 Eric Allen Hatch is a film programmer, film critic, and festival consultant based in Baltimore, MD. Eric was the Director of Programming for Maryland Film Festival from 2007 into 2018. As a film critic, he’s written for Filmmaker Magazine, Metrograph, and Baltimore City Paper, and has just launched the monthly column Infinite Fest for MUBI Notebook. Eric can also be found as @ericallenhatch photoshopping Paul Blart into transgressive art-house films and riffing on all things David Lynch on Twitter, Instagram, and his Beyond The Boonmemes Patreon page.