What do Margaret Lanterman (the Log Lady) and Buckaroo Banzai have in common?

Those big red glasses, an infrastructure of vision.

A pair of glasses is both an object and a mediating relationship between other objects–the viewer and the viewed, or, the focalizer and the focalized, to put it in visual narrative terminology.

Those big red glasses draw the attention of us, the spectators. We look at what Margaret and Buckaroo look through. Their glasses appear to be one and the same, yet there’s always a difference in repetition, just as there’s a difference between each new tulpa.

Still, this is just one of many instances of what physicists, following Einstein, call spooky action at a distance between Twin Peaks and The Adventures of Buckaroo Banzai Across the Eighth Dimension (which I’ll refer to by the shortened Buckaroo Banzai for the rest of this article). 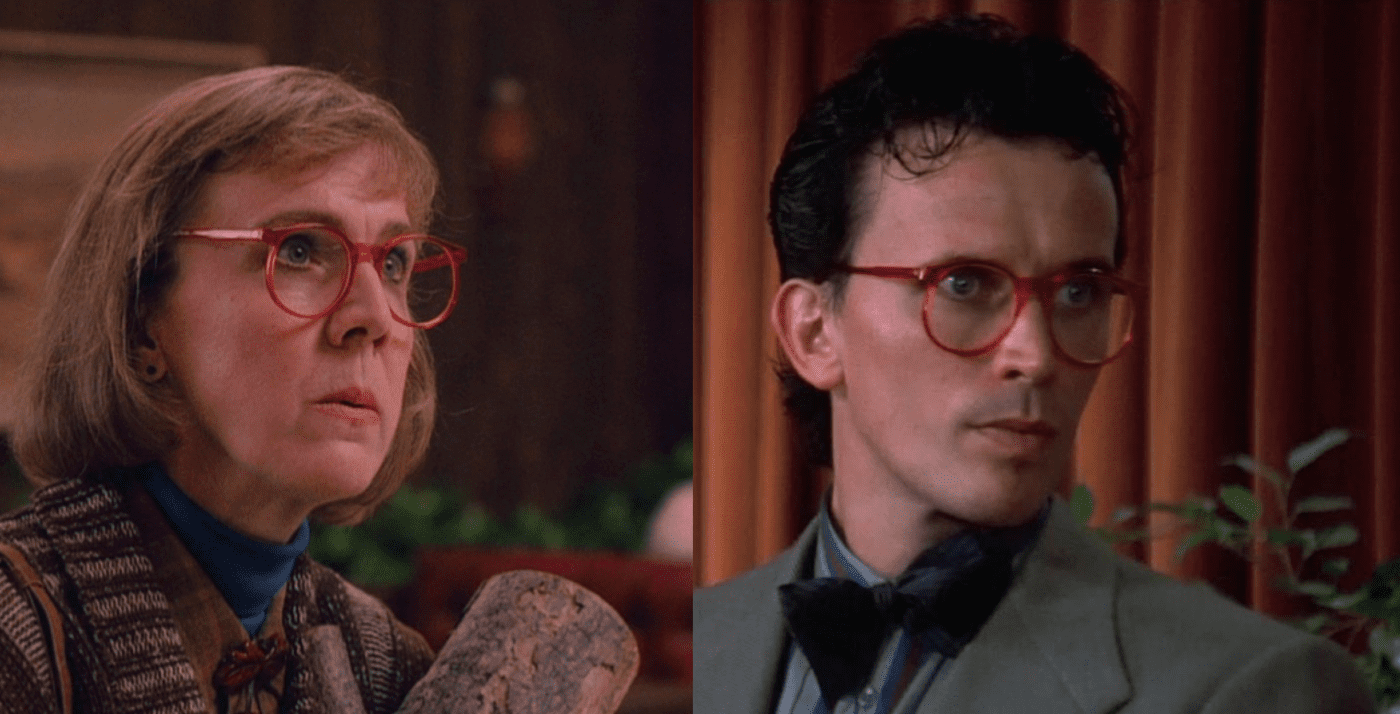 What intrigues me about this spooky action at a distance is that when you attend to the shared elements it’s like executing a thematic pull focus, and things heretofore a bit blurry in the background emerge with details in the foreground. What doesn’t intrigue me is thinking about potential influence or claiming that Twin Peaks is a Buckaroo Banzai tulpa. They both exist and shape social imaginaries in this dimension. I’m not that curious about whether David Lynch and Mark Frost happened to watch the film. But I’m keenly curious about what emerges into the foreground when the two stories are thought together, dynamically.

Mountains. The plot of Buckaroo Banzai begins with a mountain. Akin to the first encounter with Agent Cooper in the Twin Peaks pilot episode, Buckaroo Banzai draws spectators in with an enigmatic protagonist driving an automobile in, or in this case into, the mountains. By using the bleeding-edge technology of the oscillation overthruster, Banzai drives into and straight through the mountain. It is inside the mountain that he enters the Eighth Dimension and witnesses all sorts of visually stunning (at least by 1984 standards) evidence of alien life, from what resembles the microbial to the humanoid. In other words, the mountains are the site of learning that multiple dimensions exist and that alien life forms are right here on Earth.

Banzai’s revelations in the mountain resonate strongly with Twin Peaks. Recall the RR conversation where Sheriff Truman and Deputy Hawk explain to Agent Cooper that there’s something strange in the woods. Compound that with Major Briggs informing Agent Cooper that the extraterrestrial messages he’s passing along came, not from deep space, but from the mountain forests right there in the area of Twin Peaks.

What’s more, take a close look at those inner-mountain Eighth Dimension images that we see through Banzai’s eyes. It’s difficult not to see analogs, albeit somewhat-dated, of the Trinity Test sequence in Season Three of Twin Peaks as well as The Experiment.

There’s a force in these similar invocations of mountains as places to think about other the existence of multiple dimensions and radically different beings right here on Earth. Who do human beings think they are? Why do human beings treat other human beings and other earthlings, from deer and pine weasels and viruses to Douglas fir trees, creamed corn, gasoline, cellular phones, and uranium atoms the way they do? How might human beings need and want to re-imagine what coexistence could mean and how to do it?

These are the big questions that Twin Peaks and Buckaroo Banzai ask, each in their idiosyncratic and indirect ways.

And on the matter of atoms, there’s a particle-particular echo between the alternate opening of Buckaroo Banzai that features declassified footage shot in a desert of the American southwest of particle physicists performing a paradigm-shifting experiment and the sequences in Season Three of Twin Peaks that feature the Trinity Test, the Woodsman turned pirate radio DJ, and the frogmoth climbing inside the young woman’s mouth.

In the shattering of atoms, multiple dimensions coexist. The very matter of matter comes unglued, and new ethical questions about weapons of math/mass destruction rise and unfurl like the mushroom cloud and instantly blind like the flash. Lest anyone try to dismiss Buckaroo Banzai or Twin Peaks as masturbatory or absurd, these are cinematic stories of core traumas that reach across national borders and into family structures, and the aesthetics employed prompt spectators to wonder and scramble to make sense of these traumas rather than slide them neatly into ready-made narratives of supposed inevitability and humaneness.

As Dr. Emilio Lizardo watches televised footage of Banzai’s paradigm-shattering drive, the past trauma of his own partial entry into the Eighth Dimension haunts him, and spectators get to observe it via flashback. Dr. Lizardo only made it from head to waist as he attempted to cross dimensions, and when he was pulled back “out” of the wall, not only did he look uncannily like a manic Henry Spencer from Eraserhead (perhaps a love child of Henry and Windom Earle from Twin Peaks), but he brought back an inhabiting other, in the fashion of Twin Peaks’s BOB, namely John Whorfin.

What I find especially helpful about thinking these two inhabitations together is how their dynamic might be read as a thought experiment about the fuzziness between inside and outside. Or, put another way, Leland Palmer/BOB and Dr. Lizardo/John Whorfin provoke spectators to grapple with unconventional ideas about the permeability of people. What am I? What are you? And what comingling of things is part of what anyone does? There’s not a simple distinction between good and evil, and the minute a spectator slots these stories into that register, the opportunity spaces for critical thinking about what is to be and be with others is foreclosed.

Next up, Peggy and Penny Priddy. To borrow a phrase from Blade Runner, these names are more Lynchian than Lynchian names. What’s more, Buckaroo Banzai layers the plot line of the oscillation overthruster and multiple dimensions with a female doubling or doppelganger. Peggy Priddy was brutally murdered right after her marriage to Banzai (a loss not dissimilar to Margaret Lanterman’s and perhaps less so to Agent Cooper’s loss of Caroline Earle), and Banzai’s trauma takes the form of his repeatedly mistaking it when Penny tells him her name–he keeps calling her Peggy. Significant in Buckaroo Banzai’s use of the dead girl doppelganger is that the film swerves well wide of conventional quandaries in which the male protagonist agonizes over whether or not to endanger the second woman and in the process make himself vulnerable again.

Banzai doesn’t appear to see Penny as an interchangeable replacement for the Peggy he lost. He sees a ghost but also a person. After all, he brings his gig with the Hong Kong Cavaliers to an abrupt halt to find out who’s not happy in the audience and then tells the unruly audience who want to get back to the music, “Don’t be mean”–a version of “Fix your hearts or die” if you will. As such, Buckaroo Banzai, like Twin Peaks, contains some innovative storytelling moves that offer challenges to the pervasive cultures of misogyny. Neither story is wholly un- or anti-misogynistic. To my mind, there are no such things because every ideology has inconsistencies. So, in fact, the most productive stories for helping to enable change are the ones that don’t fantasize themselves as achieving some sort of total woke-ness.

Speaking of musical gigs, this pivotal performance by Banzai and the Hong Kong Cavaliers reverberates with the motif of significant scenes at the Roadhouse that runs through all of Twin Peaks. There’s potential for magic in live staged creations, and both stories tap vitally into that magic. Whether you want to hearken to Shakespeare’s Hamlet where “the play’s the thing” or revel in Banzai’s transdisciplinary embrace of scientific research, practical medicine, and multi-instrument rock and roll music, these gigs shape individual characters and social milieus.

And because Buckaroo Banzai explicitly puts Asian American identity in the foreground, I can’t help but include here how powerful the scene of Ruby in the Roadhouse, Season Three, Part Fifteen, is. For a television series that opened on the image of an Asian woman practicing a kind of self-objectification, using a mirror no less, the appearance of Ruby feels important, and at the core of her scene is an Asian American woman being brutalized by two burly white men simply for existing and taking up space. The camera forces us to tarry with Ruby as she has little recourse other than to crawl across the barroom floor, like one more piece of detritus to swept up while a Renault brother talks with a casual cruelness about underrage sex workers on the phone. Her scream is not the scream afforded to Carrie Page. I’ll leave this line of analysis here, though with the reinforcement that by thinking Buckaroo Banzai and Twin Peaks together, more dynamic and sophisticated ways to examine the invocations of race in both stories become possible.

Finally, in the mutual fashion of Buckaroo Banzai and Twin Peaks, I’ll put a closing before your big red frame lensed eyes that is actually an opening, a portal to further two-text detective work.

There’s Margaret Lanterman saying, “Electricity is humming. You hear it in the mountains and rivers. You see it dance among the seas and stars and glowing around the moon, but in these days the glow is dying. What will be in the darkness that remains?…Now the circle is almost complete. Watch and listen to the dream of time and space. It all comes out now, flowing like a river” in a world where Judy is also very clearly and intimately wired up to electricity and there are Red and Black Lectroids from Planet 10 who all consume electricity and build their technologies out of it.

And Buckaroo Banzai says, “Wherever you go, there you are,” but what does this mean in a dimension that includes Agent Cooper, Mr. C, and Dougie?

But remember, that Banzai wasn’t sent to you by Josie.