‘The Only Twin Peaks Access Guide Resource You’ll Ever Need’ is now available on Audio, written and read by John Bernardy, exclusively for our Patreon supporters. For just $3 a month you will have access to our full library of Audio content, plus three new uploads every week. To sign up visit our Patreon page: https://www.patreon.com/25YL

Welcome to Twin Peaks: An Access Guide to the Town has long been out of print, and therefore largely out of tangible reach for most Twin Peaks fans. 25YL and I are here to help! I will explore this book section by section while adding commentary, information gathered from podcast interviews, connections to the original TV series, and even some connections to Mark Frost’s The Secret History of Twin Peaks—which is fitting as Ken Scherer, COO of Lynch/Frost Productions, says this book “would have been Mark’s passion in a different place in time.”

Access Guide was published in June of 1991, the same month the final episodes of Twin Peaks’ second season aired. It is meant to appear like an actual travel guide to the town of Twin Peaks. They even teamed up with Access Press, a publisher of genuine city travel guides, to do it as authentically as possible. The book covers every aspect of the town from local plant life to its founders to local festivals. It is also a joke on top of joke—some more effective than others—while containing details that can send fans dreaming of what could have been.

Frost, while being interviewed by John Thorne for Wrapped In Plastic #9,[1] had this to say:

I was originally approached with doing a novel. My idea was to do a Twin Peaks book a la James Michner: go back to the start with the geological formation of the peaks and the strange electromagnetic force that grew up between the mountains, and how it oddly affected all the people in the area, but I just got too busy and never got to it.

But that’s not the last we ever heard of these ideas, as we see early geological history of the region in the Access Guide. And that’s nowhere near the end of Frost’s repurposed ideas to be found here. Between ideas like these and the fact that Frost was fascinated at the time by Hitchhiker’s Guide to the Galaxy, that explains the tone of this book.

Another explanation of the book’s tone comes from Ken Scherer during an interview with Deer Meadow Radio’s Mark Givens:

By the time we got to producing it, the steam had really gone out of the relationship with Mark and David, and with the show. And so I think the decision was made to have a little fun, try to be as respectful of the fanbase as we could be, but ultimately have a little fun with it and do the best we could.

Richard Saul Wurman, a publisher of Access Press, was approached to do this, and he thought it’d be a fun idea to do a takeoff on his own books and Twin Peaks. He worked with his team to do the art, layout and final wording in his offices. Mark Frost and David Lynch were involved. Twin Peaks writers were assigned topics to write about for use in the book. In Scherer’s words:

[We] kind of knew this was the end, and so in some ways we wanted to try to personalize it for ourselves, that we were here.

It was a fun way to kind of say goodbye to not only our jobs, it was also a way to memorialize some of the things that meant so much to us in the two year journey that we were there.

Wurman and his team assembled all these items and added their own touches, trying to “mirror the show and take it to an odder place,” as he told Twin Peaks Unwrapped’s Ben Durant and Bryon Kozaczka during an interview. They cannibalized anything they could and made this delightful book of marginalia and footnotes. 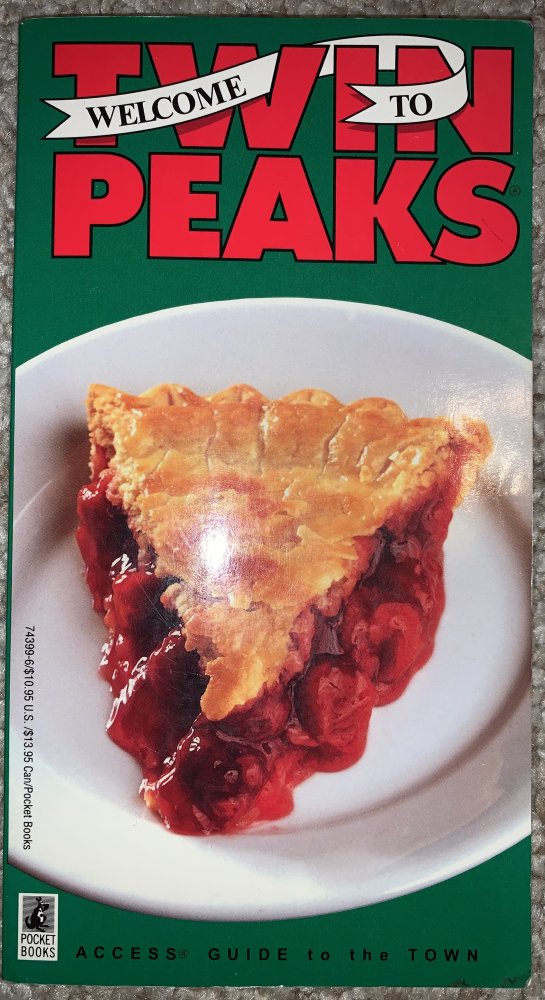 When asked about the cover, Scherer laughed and said there were a large number of comments and notes on this. You’d think maybe it would look more together if Lynch was that focused on it, right? Not this time. Wurman says David Lynch wanted the art in the Access Guide to be “fuzzy, out of focus” and “unprofessional.” Mission accomplished!

From first glance, Lynch gave us a product that looks like it literally came from the earnest residents of Twin Peaks. And you know they tried really hard!

The Inside Front Cover

The inside front cover contains a simple map of the town. Wurman says maps are prominent in this book because he loves maps. The street names—aside from Lynch Road and Frost Avenue of course—are named after Wurman’s kids and friends.

Looking at the map, I notice a few things:

Page 1: A Message From The Mayor

This handwritten note from Mayor Milford—complete with scribbled-out words—begins the book. He suggests getting outside, enjoying the town, and asking random strangers “do you have that 10 dollars you owe me?” as a greeting. Aside from being more teasing in nature than his temperament on the show, the words could reasonably be attributed to Dwayne “Is this thing on?” Milford.

Milford dates his note April 1st, which is a pretty good clue that the people making this book think they’re writing a joke. My instinct says someone on the Access Press side wrote this, but no one’s owned up to the handwriting.

I do know that Scherer had just lost his father during the book’s production, so that explains the “In Memory of Herbert F. Scherer, Sr.” between the mayor’s note and the book’s indicia.

Page 2: Did You Know That Twin Peaks…

The next page is a silly list of trivia. None of it matters except to add a big “screw you” to ABC. Twin Peaks’ original network never liked the small-town population number for the show because they thought viewers would never relate to a show about a small town. They made Lynch and Frost add a decimal point to the population. Now Lynch/Frost Productions moved it back by saying “the 1990 census revealed our present population is 5,120.1 not 51,201.” This creates a weird joke about there being the possibility of 0.1 of a person (Maybe it’s the Arm).

The only other interesting detail I see here is that Twin Peaks is located exactly between an extremely cold Alaskan town and an extremely warm Arizona town. In-between states are all the rage in Twin Peaks, and this is one more instance, however much from happenstance.

Page 3: From the Will of Andrew Packard

This excerpt from Andrew Packard’s will declares that a sum to the town treasury be used to create a book “extolling and promulgating the many virtues and points of interest of our beloved community.” There we have the in-universe reason why this book exists, but it doesn’t exactly justify why the book was completed. Andrew Packard’s bio places him as presumed dead enough to put the funds in motion to create this book but also lists him as being alive. If this were a more serious book, I’d be curious why in-universe production continued on it even after Packard was revealed to be alive.

Regardless, these details place this book’s creation somewhere before when the finale had been filmed—Andrew perished for real in that episode’s bank explosion, though it was Catherine in the Episode 29 script.

As far as Andrew’s tone of voice, I believe Packard’s sense of civic pride is genuine, based on his giddy approval of Audrey exercising her rights of civil disobedience for the greater good of the town. He’d be the kind of guy who’d want his town to proudly sing its own praises.

Next, we get a two-page spread of the book’s table of contents. Feel free to go to the sections directly through the links below, or go to the next page to follow the book in chronological order.