This is the first piece from guest writer Laura Shig! Please welcome Laura and let us know what you think!

The legends and myths of Yakima and the Salish-Colville tribes and how they may offer more insight into our favorite non-verbal characters.

While the Nez Perce tribe is mentioned frequently in The Secret History of Twin Peaks (SHOTP) by Mark Frost, the tribes most likely to have interacted in our fictional town are the Salish and Colville (which crossed what is now the United States and Canadian border) and the greater overarching mythology of the Yakima Tribe, which covered a vast majority of central Washington State. The description given by Dale Cooper place the town in the Salmo-Priest Wilderness (red star indicated Twin Peaks). 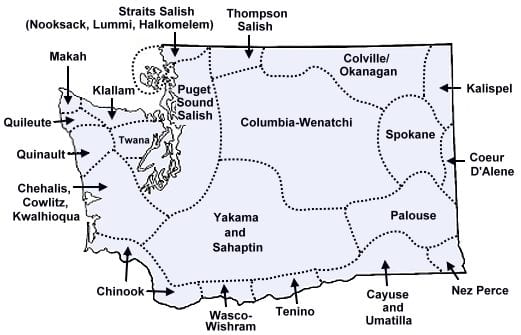 If we continue with the world outlined by Frost and David Lynch, the Owl Cave is relatively close to the town, so this could account for the missing time of Meriwether Lewis in the SHOTP.

THE OWLS ARE NOT WHAT THEY SEEM
Owls are often seen as a portent to evil in many of the tribal mythology in the Pacific Northwest. There are a few stories about the Owl Women in Yakima tradition that are of interest to me. There were ancient people who ate members of the tribes and also amphibians, but their favorite food to hunt were children. They were tricksters, numbering five sisters called the Tah-tah kle’ -ah, and lived in a cave. A legend is that a young Shasta boy was captured by the Tah-tah kle’ -ah, but the decided not to eat him. He was able to escape return to his people. What happened to the boy at this point isn’t discussed, or at least not in research I found online that was more than opinion.
Over time, two of the Tah-tah kle’ -ah were destroyed when the cave they lived in became red hot and a great wind blew them away. (To me this sounds like an allegory for an ancient volcanic eruption.) Another drowned, and it is believed that from this sister’s eye all the owls came. She was cursed as she died, told “‘From now on, your eye will be the only part of you to act. At night it will go to certain birds, the owls.” Is the sister still watching? Besides telling people to be careful in the woods at night, what is the reason for this story? My thoughts are that the sister is waiting and hoping to lure people into the water….perhaps represented in the waterfall as they are both beautiful and terrifying.

In addition to the Native American and First People legends of owls, there are numerous stories of the owls being connected in some way to aliens. (Too many to cite here, and a little out of scope for this article.) But, the more I reflect on The Secret History of Twin Peaks, the more I am convinced that either of these traditions could be applicable to the mythology of Twin Peaks. Are the owls watchers? If so, who or what are they watching for?

THE ARM?
The main difference between the Salish and Colville tribes and the Yakima tribe Stick People would be their respective sizes. The Salish and Colville Stick People are larger and better fit the descriptions of Bigfoot, while the Yakima legends see these entities as forest dwarves. There are taboos about speaking of the Stick People, so there is very little specifically written about them as the mere mention can provoke attacks, which range from leading people astray to paralysis, hypnosis, or insanity. In the worst stories, these Stick People have the power to kidnap, molest women, and eat people they capture.
In addition, the Nez Perce and Arapahoe tribes have stories about the Stick People. In those histories the Stick People were able to rub themselves with certain grasses in order to become invisible, and could shrink themselves very small. The people were admonished to not go into the forest at night and never alone. The Ya’ yaya-ash, as they were called in the Yakama tradition, the Stick People are seen as a one-legged man, and some people taken by the Ya’ yaya-ash will awaken naked and with no memory.
Most of the legends of the Stick People focus on larger than life entities, which is different from most of the tribes that would be in the area surrounding Twin Peaks. For most tribes in the Pacific Northwest, the Stick People resemble Sasquatch in popular culture. For many in the Tacoma and Salish tribes these are also called Tsiatko (or Seatco) and are known as “the Giants”. They are tall, slender, athletic creatures that are also thought to be ventriloquists. Those that encounter the Tsiatko claim that they are hypnotized and become senseless and helpless as if they were in a deep slumber.

The owls are not what they seem, after all. I can only assume that Frost knows of this and other myths about the owls in the Pacific Northwest, which leads to an additional feeling of foreboding when we do see the owls. What do the Tah-tah kle’ -ah want? Why did they not kill and eat that Shasta boy? Are they still in the woods waiting and watching to find a victim? The owls are either viewed as evil or as watchers, which in our little town of duality, finds a counterpoint in Margaret’s log. The Owl Cave, holding the keys to the puzzle, (or holding the Owl Woman and her secrets) are constructed to confuse our heroes while they search. Margaret is the wise woman, the moral compass, and her log holds the secrets of Twin Peaks. If these connections are true, then truly Frost has delved well into the past to bring this nightmare to life in ways even a casual viewer can feel spreading over them like a heavy blanket.

Then there are the Stick People…they are an interesting side point that I wasn’t expecting when I was beginning the research. We know that nothing Lynch does is ever just a coincidence, and Frost has a tendency to use old stories and articles to influence his development and progression of the backgrounds of his work. At first, I thought of the Log, and how it has the ability to speak to Margaret, but after delving as much as I could into these people that are taboo, the more I realized that this would not fit. The Log is the antithesis of malicious, the Log speaks and shares information; and while not able to stop bad things from happening, the Log is far from the catalyst of these acts. The Stick People are designed to do every bad act BOB is accused of. Not so with the Man from Another Place. Most interesting, to me at least, is the physical representation of the Yakima’s Stick People, missing a limb and able to disappear by rubbing grasses on itself. This of course reminds me of the Man rubbing his hands together and the strange humming sound that appears in the red room, and with us knowing that he is also the arm. The ability to use sound in order to lure people away or to paralyze them also reminds me of the fan in the Palmer house. (You noticed that the ceiling fan is switched on when BOB is coming, too, right?) The ability to mimic sounds is important in the Stick People’s repertoire to cause confusion and helplessness. This influence would help explain Laura’s irrational behavior on her last night, when James says she was like two different people before jumping off his bike and running into the woods. Was she following the call of the Stick People into the forest, and eventually to her death? These Stick People are of the forest and of nature, before the first Native American tribes and not spoken of lest they appear. Laura and Teresa both mentioned that their arms felt numb prior to their deaths at the hand of BOB. The parallels of the stories of possession by the Stick People and the malevolent story of BOB are too close to ignore or discount.
In both size traditions (One and the same?) the man from another place and the Giant embody different characteristics of the Stick People, but the Giant is more a warning or things to come. I personally view the Giant and the Log as resembling each other in different realities. The Giant, though, does resemble similar potential to trickery yet chooses to spread confusion through riddles. That’s not completely fair, though. I suppose it is more fair to say that he is restricted by the smaller counterpoint of the Stick People legend and tries to warn Cooper as best as he is able, while not running afoul of the smaller Stick People.

What did you think? As always, we would love to hear your feedback and if you would be interested in more research style pieces like this one.