April 19th, 1990: “Zen, or the Skill to Catch a Killer” airs on the ABC Network. The episode ends with a backwards-talking little man in a red suit, dancing and spouting cryptic clues to Agent Cooper in a dream-like room with red curtains. America has never seen anything like this before on broadcast television.

“This version of Twin Peaks is the pure heroin version of David Lynch, and I’m very excited to be putting that out.” – David Nevins, Showtime at a press conference in January 2017.

June 25th, 2017: Part 8 of Twin Peaks: The Return takes us to White Sands, New Mexico in 1945. Lynch visually takes us inside the mushroom cloud and then proceeds to spend several minutes using music only, no dialogue to take our eyes and our minds on a journey. An origin story of sorts that saw us plunge to the bottom of the cloud to its fiery depths with the end result being the release of several Woodsmen (Dugpas?) onto Earth, congregating at a convenience store. We would also see a bubble of sorts being spawned from a “Mother” like figure, with that bubble containing the smiling face of Twin Peaks most famous demon killer, Bob. The visual tour de force was not over but much like he did way back in 1990, David Lynch had taken television to a place it had never been before. The question is: will this brave exploration of what the medium can do be embraced or is America just not ready for it?

After we saw the Woodsman and Bob’s arrival to our planet via a nuclear blast, we would go to another far off distant place, a place that was reminiscent of both the opening scenes of Parts 1 and 3. Inside this magnificent structure which appeared to be part theatre, part mansion in the sky was a well-dressed woman credited as Senorita Dido who sat listening to music, ignoring an alarm going off. Enter The Giant (credited as ?????) who did not ignore the alarm. The Giant sprung into action, moving to a different room where he could monitor the arrival of the Woodsman and upon seeing Bob’s face, The Giant began levitating much the same way Leland Palmer did in the final moments of Fire Walk With Me and began to produce a light (energy?) out of his head. The end result of this production? A golden ball with Laura Palmer’s face inside. Senorita Dido caught the golden ball with much joy and released it into the world.

Part 8’s final scenes took place back on Earth in 1956. We saw a Woodsman take over a radio station, crushing skulls with only one hand and assume controls over the airwaves. He then proceeded to recite a poem that can only be described as The Return’s version of Mike’s Fire Walk With Me poem from Seasons 1 & 2. All the while, we are bearing witness to something hatching; a winged creature that seems to be growing by the minute. We cut to a scene of a young couple, the young man asking for and receiving a kiss after walking the young lady home. As she lays in bed listening to the radio, the Woodsman’s voice and poem recital seem to put her into a deep sleep and the winged creature comes in through her window, climbs in her bed and crawls into her mouth. This was eerily reminiscent of Bob crawling through Laura’s window and into her bed.

So. Many. Questions. Was that young woman Sarah Palmer? Was Bob laying dormant inside Sarah for years, waiting for Laura? I know that seems to be the popular theory, but I’m not sold. Was she a character we haven’t seen yet and the point of the scene was to show that Bob has been targeting young female victims since his arrival as a winged creature on this Earth?  Not that it would be the first time for Twin Peaks to retcon something. But Sarah Palmer would have only been ten years old when that scene happened and I have a hard time imaging Bob just hanging out inside of her for all those years, especially when the story has shown us that Leland was the one who had been dealing with Bob since a very young age. Or was that the point? That this battle between Bob and Laura have such high stakes that he targeted both of her parents for years before she was born? 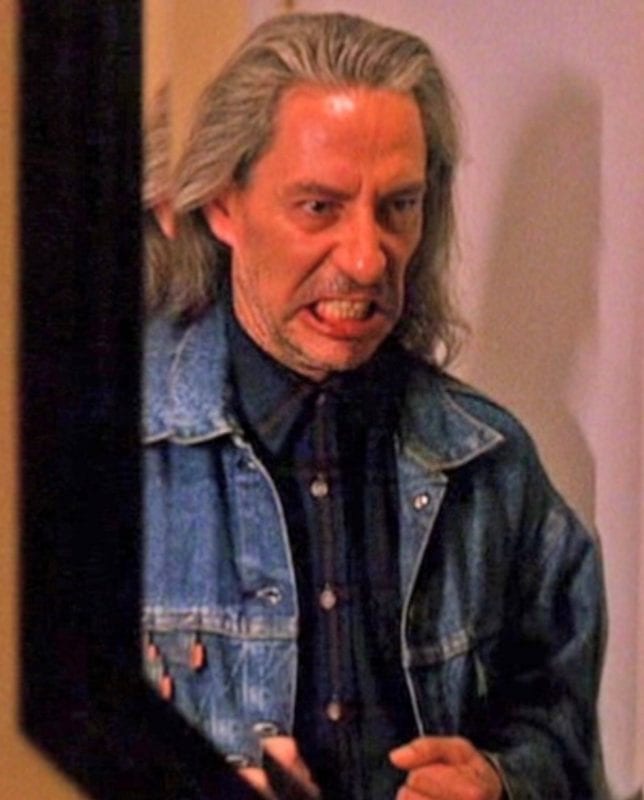 When the title card flashed early in the episode and told us we were in White Sands, my mind raced to a book called “The White Sands Incident” by Daniel Fry. Fry, a highly acclaimed scientist who would become best known for claiming to be abducted and told numerous things by the aliens that abducted him. The part that is most relatable to Twin Peaks is the origin story he claimed to have been told. That millions of years ago, there were aliens here with the most primitive of human beings and that some of these aliens began to sexually take advantage of the humans, raping and performing other acts of cruelty towards them. Eventually, the superiors in the alien hierarchy came to Earth, leaving their heavenly confines and saw what was happening and banished the violent and sexually abusive aliens to a fiery place at the Earth’s core. These same aliens were only able to return after the nuclear blast at White Sands, New Mexico. Pretty easy connection between Fry’s book and what we saw last night, with the violent and sexually abusive Bob being released on Earth after the blast. So if Lynch and Frost are using similar mythological themes here, does that make The Giant the superior and was he in fact in The White Lodge?

While there is much to dissect and I’m sure more will be revealed during repeat viewings there are a few things we know for sure that came out of Part 8. We saw an origin story. We can safely assume that the Woodsmen are here now to act in place of Bob since Bob can only be shown in graphics from time to time. Laura Palmer, who was always our story’s hero, gained her own mythology. She was pre-destined to take on Bob. She was chosen by The Giant and Dido (not the Dido who wants to thank you either), which brings up the fact that she’s dead. “I am dead, yet I live,” Laura told us in Part 1. The fact that she was wrapped in plastic doesn’t mean anything. She’s in some form or another a major factor moving forward. The battle lines have been drawn. How does the third key player, Agent Cooper, fall into this story? That remains to be seen.

What we saw last night changed television, much like Lynch and Frost did back in ’90. Twenty-seven years later, Lynch and Frost told a story they always wanted to tell and Lynch got to visually take the small screen to places where only Stanley Kubrick had taken the big screen prior. Tonally, yes there was a lot of Eraserhead in Part 8 but there was just as much Kubrick and we all know how much Lynch loved and respected Kubrick. From a career achievement perspective, last night was a milestone for David Lynch as a director. I posed the question before and I’ll bring it back up again now: Is America in a place where we are ready to embrace art house television to that degree? Lynch has praised cable TV over the past few years, calling it the new art house cinema. Last night he made that statement a fact. How will it be received is now the question.

A few hot takes: Ray’s plan to kill Mr C looked great until Mr C didn’t die courtesy of the Woodsmen. Ray better hope Phillip Jeffries needs him alive otherwise he’s in big trouble. Can we stop and think about the fact that Nine Inch Nails got to perform a five-minute song in the first quarter of the episode? How crazy was that? I enjoyed the performance though. Will people finally start acknowledging how important The Secret History of Twin Peaks is? One of these days I’m going to go through the Dugpa message board and talk to all of those people who bashed the book and ask them what they think now…

Thank You: This makes 100 posts for the site, and from the bottom of my heart I want to thank each and every one of you that reads our work. Writing about new Twin Peaks is a dream come true. Being able to work with this amazingly talented team and to have people actually read and enjoy our work is a feeling I can’t describe. This is one of the greatest experiences of my life and it would not be happening without you. Here’s to the next 100. Until next time…