Welcome back to Homeward Bound! Except, this Part, we’re bound for the extra dimensional Purple World once more, instead of Twin Peaks! And yes, I have been waiting to make that Skyrim reference since they very first article I wrote for the column. I’ve held off all day on writing this. I held off on it ‘so hard’ that I ended up writing a twelve page article on the music featured in TWIN PEAKS instead. How about that for productive procrastination?

As anyone who is writing a recap, analysis or otherwise knows, Part Eight, “Got a Light?”, is a recappers nightmare. A ten minute plot sequence at the beginning, a short, single song concert from Nine Inch Nails, thirty minutes without any dialogue plus sensual overload, and a trip down classic fifties black ‘n’ white picket fence lane plus the greatest hits of silent horror and a universe changing, mythos upending series of revelations all in one.

But that aside, let’s return to the calm, cool, purple ocean in that extra dimensional space in which Cooper found himself in Part Three and, coincidentally, Part One! I had already postulated that the opening scene from Part One was not a) in the Red Room, and b) happening in chronological order with the rest of the show. Now we have concrete proof of where Dale was in his scenes with ???????. This new Castle-like structure, inside which is the same cushy, Black and white trappings, and the same, gleaming gramophone. ??????? even wears the same outfit!

That aside, I think most agree on the fact that this building is not the same as the fortress where Cooper fell to in Part Three. Same world/dimension, different place.

Instead of a play by play from here on out, I’m going to try to focus on a few key elements. Many have suggested that this place is the White Lodge. We did see Major Briggs’ ghostly floating head, so maybe there’s so traction to that theory but I wouldn’t say I have any particular feelings either way. But what happens within feels like a parallel in some ways to what happened to Dale at the fortress. Same bell-shaped machine, for instance, and a warning imparted.

The woman present at the castle is called Senorita Dido (rhymes with Naido!) obviously has some significant role in the happenings there. Dido, in Greek and Roman mythology, was once a goddess, which meshes well with the idea of lodge spirits. She’s also the feminine youth to the Giants masculine ancient: The Divine Balance of Sacred Feminine and Sacred Masculine is a concept found in many cultures. Much like yin and yang they make up one whole. It’s thought by some that we are all a combination of this sacred Feminine and Masculine, and that the balance of these two energies allows you to be a fulfilled individual. This concept crops up a lot in cultures where rebirth and reincarnation are pillar tenets of their belief systems. 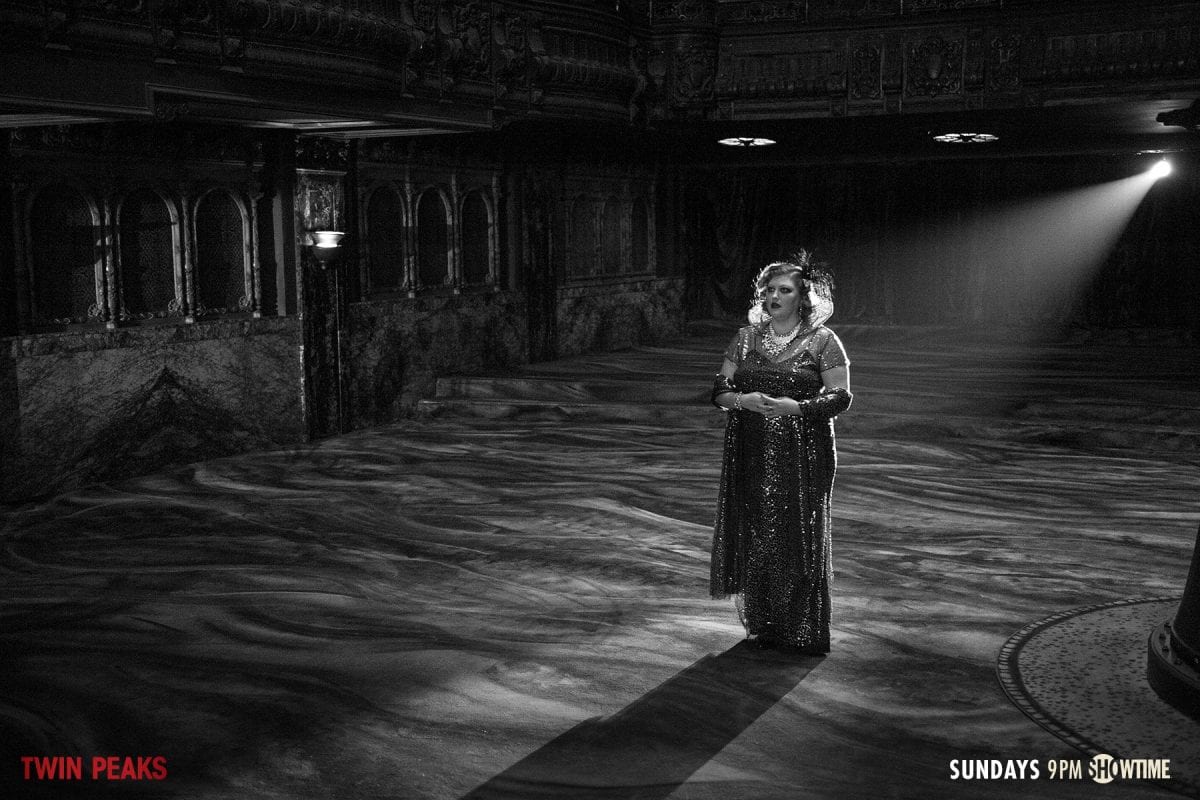 Let us start with her. She’s soft looking, calm and sweet. She kisses the golden Laura orb with such unequaled tenderness. She moves languid with grace, like a dream. She reminds me of hope, as a concept. According to Essential Courses for Empowerment and Awakening by Anahata, the Divine Feminine “offers tenderness, wisdom, patience, nurturing, flexibility and fertility. Feminine intuition is one of our most powerful tools for guidance, and we all have it.”

Arkan Lushwala in his book Time of the Black Jaguar says that “True feminine brings a deep wisdom rooted in trusting one’s intuition and heart. It is a passionate, creative, and life-giving force. The true feminine supports deep heartfelt nurturing of all creation and the passing along of traditions from one generation to the next.

All of this invokes Senorita Dido’s image quite well, especially the nurturing part. The look in her eyes when she kissed the orb was that of pure love and care. She also retains the goddess alignment afforded her by her name, as she is decked in jewels and finer. 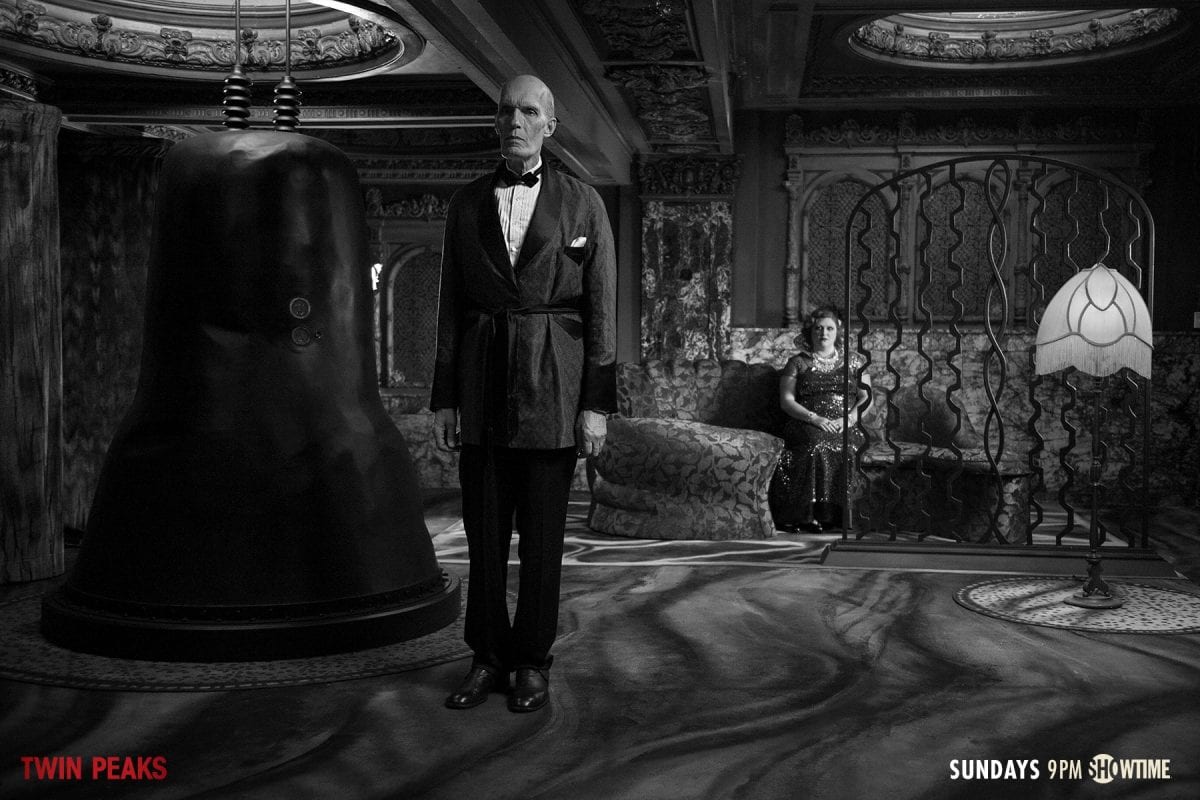 ??????? is the literal representation of a gentle giant. He’s old, and seemingly frail, but he seems to have a certain determination to him a sturdiness, as well as tiredness brought on by wisdom. Again, Anahata provides the following description of the Divine Masculine as “fearless, courageous and loyal. “He” is our guardian protector. When in balance, the masculine protector does no harm. His gentle strength brings harmony and peace to where there was conflict and separation.”

Similarly, Arkan summarized that “The true masculine is characterized by confidence without arrogance; rational thinking without a need to control; honor without a desire for war. It provides stability, strength, and courage in an ever-shifting world.”

The most distinct element that stands for ??????? is the idea of war as undesirable. This entire sequence occurs in direct relation to the Trinity bomb test, which is a herald of war if I ever saw one. His grandfatherly nature lends him that guardian feel as well, someone who seeks peace. Later on, he echoes Dido’s classical origins when he ‘births’ the golden Laura orb from his head, in a very Zeus-like manner.

Together, says Anahata, “when working in harmony, the Sacred Union of the Divine Feminine and Masculine can unite, heal and create [anything]. The synergy created by this balanced union catalyzes the forces of creation into manifestation. The love that is possible when birthed from this union is that of the unconditional sacred heart of Divine Source. By balancing, healing, honoring and integrating our Divine Feminine and Masculine energies, we write a new future for ourselves, humanity and this planet.”

Could this creation be the Laura orb? In her article The Divine Sacred Union by Sharon Rose, a professional in Energy Healing and Movement, she described this union as an inner alchemy, something which we’ve been discussing frequently over the course of the Return and which you can read about in Gisela’s Twin Peaks and Alchemy and also John’s The Alchemical Origin of Laura Palmer: Does She Have A Choice Or Is She A Chosen One? , on our site. It’s certainly something to consider. The article goes on to describe this process:

“When we are both in our essence, in union with ourselves, we can become conscious of the alchemy of the relationship that is being created between us. Within the sacred relationship, we are two beings enjoined and vibrating in harmony. Breathing in sync, heartbeats in rhythm, we create a third field of energy, the trinity or the child.”

The name of the detonation which we experienced in Part Eight is the Trinity nuclear test. It’s funny how these things just sort of work themselves out, isn’t it?

??????? births the orb, Senorita Dido imbues it with her kiss and sends it up into the air, “Infusing the Machine with Gold” as it were – a phrase which came up at David Lynch’s Festival of Disruption last month.

The fact that this entire sequence takes place in what appears to be a theatre also bears mention. The watch what we just watch, they see what we see and we view and absorb their reaction to it. It is muted horror and sadness, and it is achingly beautiful all the same. This is not the first time that The Returnhas worked with the meta concept of watching characters of television watching characters/events on television. This theme goes back as far as Part One, again, and the mystery of the box.

Part Eight has definitely been an experience in “Discerning the Transmundane” as it were. There’s little to be gotten out of a straight recap. It’s a thoughts and feelings, evocative piece. It’s art. You don’t so much describe what’s happening as interpret what it means to you. It’s moving artwork that defies precise explanation. I can’t imagine someone trying to explain such transcendental concepts in any other way except by allowing you to feel it. In lieu of telling, Lynch (and Frost, because he’s very much present here, despite all outward appearances) does just that, imprinting those moments into the very matter of our brains permanently.