The topic is: Who came out triumphant in the end?

In the aftermath of the biggest shock ending since Number One turned out to be Number Six, it is time to take stock. The Return recast the small-town troubles of a logging community as an epic struggle between good and evil that has been raging since time immemorial. But after the dramatic events of the final double-bill, which side has the upper hand? In short, who won – the Black Lodge or the White? Did the forces for good emerge triumphant or were the evils in the woods victorious?

To me it seems clear, by the end point of Part 18, the dark minions of Xiao De (Judy) are winning the war. Along the way they have scored countless minor victories and foiled the efforts of Team Blue Rose. They may have lost some skirmishes along the way, but the Black Lodge is still in control. 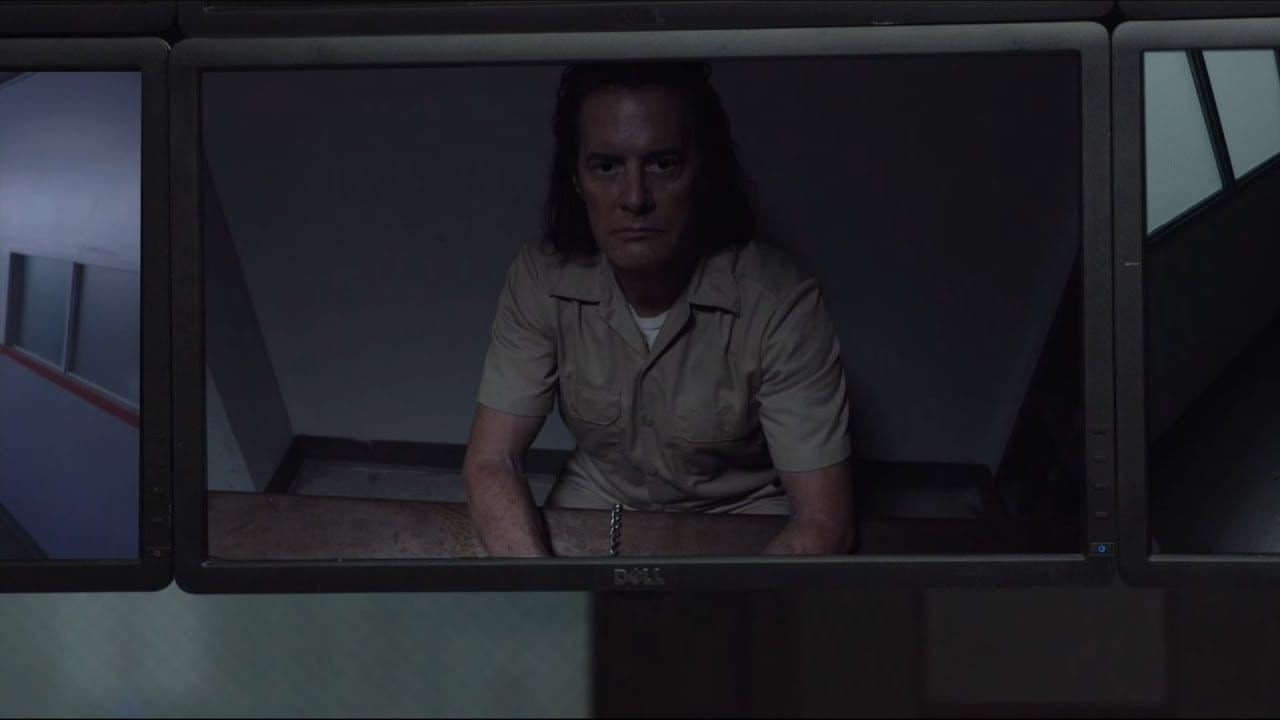 Dale Cooper’s shadow self, his doppelganger, Mr C, who played host to Killer BOB throughout The Return might now be dead and returned to the Lodge, but he was able to wreak plenty of mayhem before his final confrontation at the Twin Peaks Sheriff Station. His repeated remote attempts on the life of Dougie-Cooper may have failed, but Mr C and the Woodsmen (excellent band name, right there) racked up quite the body count over the course of the series – Bill and Phyllis Hastings, Ruth Davenport, Darya, Ray and many more. Additionally, Mr C appeared to be able to kill with impunity – blackmailing himself out of prison with ease.

One reason the Black Lodge forces were able to stay ahead of the curve throughout the series was that they had a plant in the Blue Rose camp. A double of Diane, apparently created by Mr C, was brought in, right under the FBI’s noses, and made privy to vast swathes of confidential information, even becoming an honorary Blue Rose Deputy before she was ultimately whisked out of existence. Cooper’s dark double was able to use this tulpa to access the Feds’ plans, spread misinformation and ultimately to make an attempt to kill three agents. 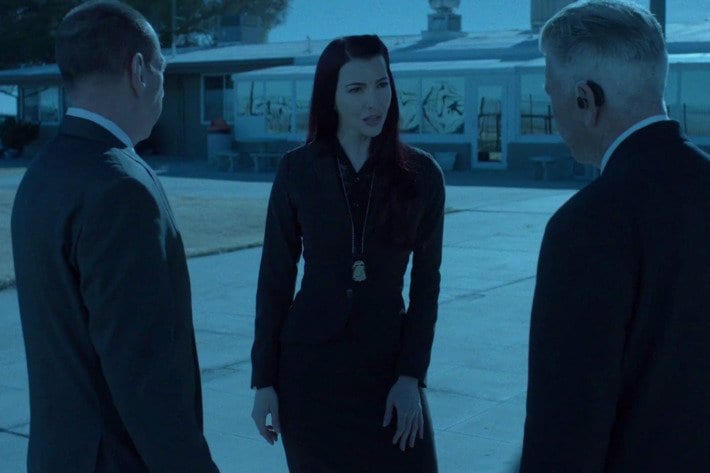 That the FBI didn’t notice any of this is a clear sign they were out of their depth. They failed to act, even when they sensed all was not well with Diane. Similarly, Cole, Albert and Tammy took the entire season to realise that Special Agent Cooper had a rogue double on the loose. Long lost agent Phillip Jeffries, now inhabiting a kettle, at least seemed to make an attempt to mislead Dark Cooper with false coordinates – but even his efforts failed, as Mr C sent his son Richard into the trap in his place, seemingly completely unsurprised by the double-cross.

If we consider BOB and Mr C to be foot-soldiers in the war, their loss at the end of Part 17 could be considered acceptable, if a greater victory was won. And it clearly was. The upper echelons of the dark forces have been allowed to operate completely unchecked. Xiao De, the ultimate evil, the “extreme negative force”, is still at large. It is unclear whether Judy is the malignant force currently inhabiting Sarah Palmer – but whatever evil entity resides within her is also still out in the world, killing and destroying without consequences.

Cooper’s apparently misguided efforts to heal the world, or the town of Twin Peaks, or the Palmer family by saving Laura’s life have also back-fired. Laura slipped through is fingers before he could take her to the golden pool portal by Jack Rabbit’s Palace. Her echoing scream points to the fact that Black Lodge forces have once again taken her. Undeterred and having apparently learned nothing from his first failure, Cooper presses on, trying to kill the second bird with one stone – as he takes Carrie Page from Odessa, Texas, to the town of Twin Peaks in the vain hope that arriving at her childhood home, the scene of her abuse, would bring a positive outcome. On arrival, he found he had been outmanoeuvred by the Black Lodge forces, as the Tremonds and Chalfonts conspired to keep Sarah Palmer, and whatever evil presence now controls her, out of his reach. 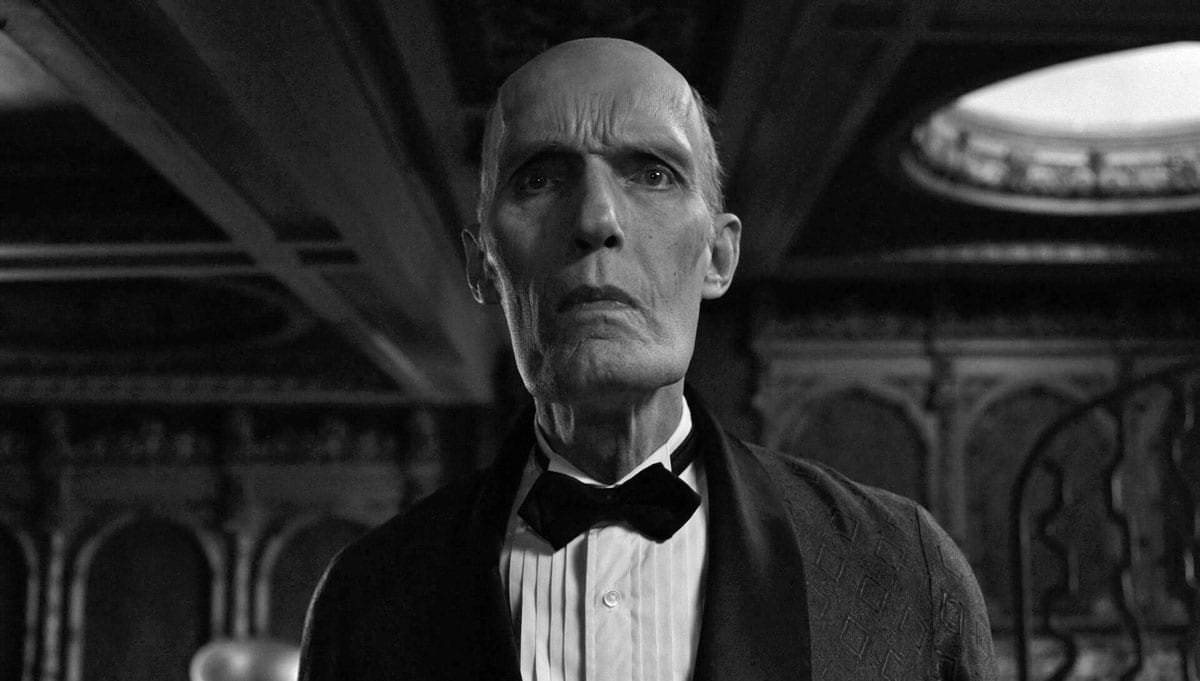 Even the supernatural opposition to evil – the Fireman and the White Lodge, seem ineffective in the face of the dark onslaught. The giant may have created Laura as a glowing orb for good, to counteract the evil he saw born in the atom bomb, but his efforts seem to have been in vain, as the Experiment is still free in the present day to devour the heads of innocent bystanders. The Fireman also seems to have chosen his allies unwisely – with the ambiguous ending of The Return implying that perhaps Cooper was simply not the right man for the job, that he misunderstood his role somehow. And if the Fireman, a godlike superbeing with omniscience and other-worldly powers, cannot succeed against his foes, what chance do us mere mortals have?

With Laura lost, Sarah hidden and Cooper apparently disorientated and bewildered in a labyrinth of timelines and parallel realities, this looks like a big win for the Black Lodge. Xiao De is still operating unchecked in the world and her only opposition, the Fireman and the Blue Rose Task Force, seem hopelessly out of their depth – their agents adrift in time and space. The unrest and madness advancing through the town of Twin Peaks – drug-taking, ineffective policing, zombie vomiting sickness, confusion, violence and murder- all of this will continue to spread unchecked. Nothing has been healed, nothing has been resolved. The bad guys are winning.

In the world of Twin Peaks, which has always rested in the uneasy middle ground between forces of good and evil, it felt inevitable that a showdown between the two would occur. It’s what we’ve been primed for all season, and in the final seconds of The Return‘s two-part finale, it seems as though we got it. Laura, the girl with the White Lodge light inside her, was standing on the threshold of the house where her mother once lived. Her mother, mind you, who contained the dark force of the Black Lodge behind her visage. Where once we might have thought that the final battle would be fought between Cooper and Mr. C, it appears that it was actually fought by mother and daughter.

I believe that the fact that the lights in the Palmer house go out while Laura/Carrie’s scream rings out from the TV screen is a sign that the White Lodge was victorious, thought it perhaps came with a price.

Up until this point, Laura has been “Carrie”, a woman from Odessa, Texas who needs to, in her words, “get outta Dodge.” Likely because of the dead man she has sitting on her sofa. She looks an awful lot like Laura Palmer, but she had none of the memories of our tragic heroine.

None of the memories, that is, until she arrives in front of the house in Twin Peaks. 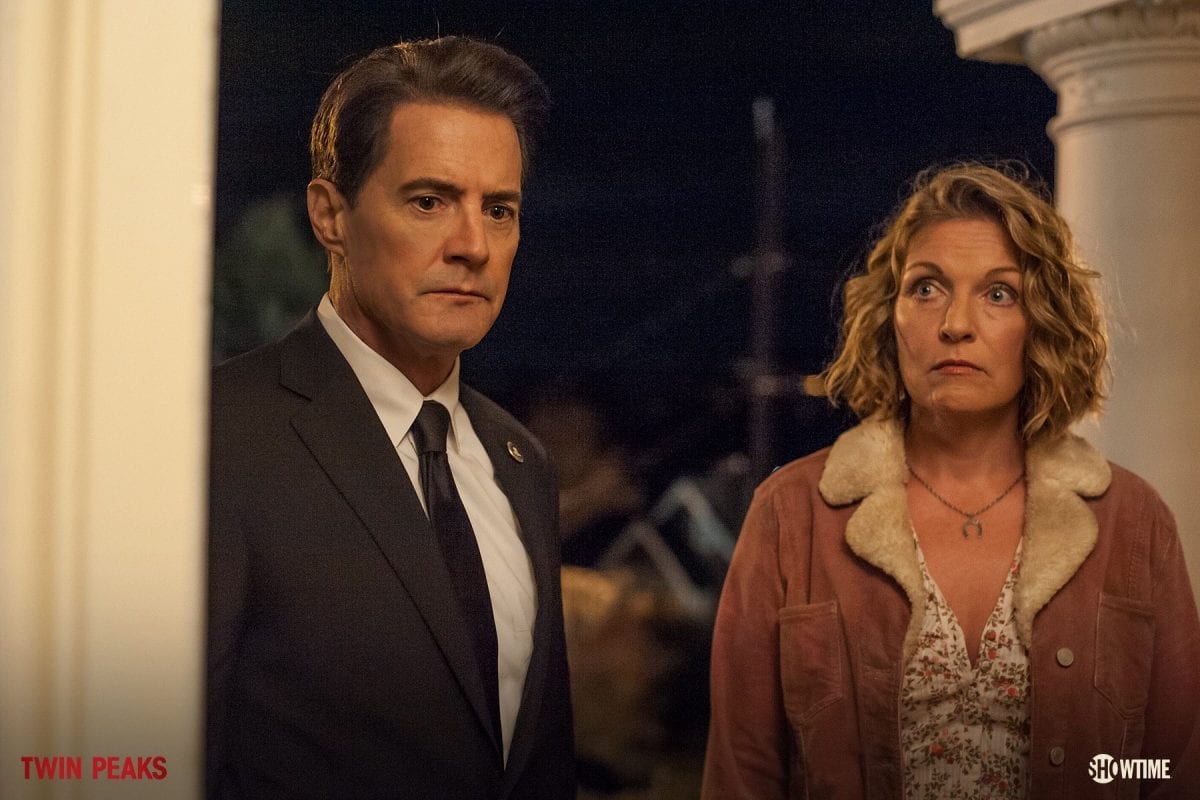 In a chilling moment, after being turned away at the door by the current owner (Alice Tremond, played by real life “Laura Palmer House” owner Mary Reber) and in the presence of a baffled Special Agent Dale Cooper/”Richard”, “Carrie” lifts her eyes to the house and hears Sarah Palmer crying out for her daughter on the morning of February 24, 1989, before it was known that Laura had died, and when Sarah believed Laura was still simply asleep upstairs. The horror of the moment rains down on “Carrie” in the middle of the street; she opens her mouths and screams.

Now we aren’t arguing about what it means that Laura/”Carrie” screams at this moment, but what we can say is that the immediate effects are staggering. Across the street, the entire Palmer house goes completely dark, as if every light switch were turned off at once.

As if the electricity were cut off entirely.

E-lec-tri-ci-ty. The very stuff that the Lodge entities use to travel to and from the earthly realm.

Laura/”Carrie” screams and the electricity goes out. This seems to suggest that the access point to the house — which is, remember, the source of all of Laura Palmer’s pain and suffering, as it’s in this house where she is molested, raped, and psychologically tormented for all of her adolescent years — has been blocked off somehow. Could it be that Laura’s scream itself is what does it? Is Laura’s presence there enough to fundamentally shift the balance from Evil to Good?

Laura was sent down to Earth in a golden orb by the Fireman after he witnessed the events of the first nuclear test in 1945. He knew that what had been unleashed was too powerful to leave alone, so (I believe) he selected the strongest player he could find to defeat it. Laura had already defeated BOB and vanquished those demons; why not put her in a position to fight the terrible Experiment/”Mother”/Jowday creature (yes, I realize I’m making a leap in assuming that the creature is known by all three names; what’s undeniable is that she is the source of evil, as we see her “birthing” BOB, who we know to be evil himself.)

How does such a battle play out? I don’t know, but if I were doing it, I wouldn’t do it in a

literal battle — such as what we witnessed in the Sheriff’s station in Part 17 between Freddie and BOB, which bordered on the cartoonish. I’d have Laura reassert herself and issue a direct challenge to the forces that live in her house of horrors. The side effects presented by “Carrie” only heighten the emotion, as this woman who remembers none of what Laura went through suddenly has that door opened for her, forcing her to remember. It’s a chilling scene, and it’s chilling because it’s so simple. “Carrie” screams in fear, but Laura’s screams are a battle cry.

One more thing? The final credits play out silently, with the barest hint of music playing over them, and when we cut to the familiar Lynch/Frost Productions logo, it plays…but without the static electricity charge we’ve come to associate with it. Is this a coincidence? Or is the lack of electricity, like the lack of lighting, an indication that the Black Lodge forces have been destroyed?

You be the judge.