As a people, we are mired in the curse of man: to look back and to see what we could have done differently. To know how things have changed, and be unable to alter them, but also, the worst curse, which is to desire the past so heavily, and never be able to attain it once more.

Though I can’t recall the circumstances, I recently heard in conversation a discussion of how certain moments, the especially fleeting ones, which we desire the most, and cherish the most, mean the most to us right before they are over. During the experience, we have the epiphany that it will never come again, and while we are contemplating the future loss, we either miss the moment entirely, or feel it slip more quickly through our fingers than it had before. Wouldn’t it be nice to freeze the most spectacular sunset for an hour? You think as the sky turns to twilight. The answer is no. Because an eternity of the most beautiful sunset is meaningless. An eternity of anything is meaningless.

Ten, fifteen, twenty-five years later, our memory of that sunset isn’t the same. Every time a person brings a memory to their mind, it degrades a little, alters as our perception falls away with age. Instead of a vivid pink it is now a vibrant red flame. More beautiful than the reality ever was. Our nature is to exaggerate things. And our nature is to yearn for those bygone moments, because the past is a familiar friend, and the future a startling shadow on the horizon. We can never know what will come. We never should know.

I’ve preached (yes, I’ll admit, preached) about the dangers of nostalgia, but that doesn’t mean it is an easy trap for any of us to avoid. It has been especially hard with reboot culture, hollywood and the television industry pushing reboots and revivals marketed purely on the basis of nostalgia factor, most of which really don’t have much else going for them. I don’t need to provide examples, all of you are thinking of your own personal experiences, of the disappointments you’ve undergone when the film or show that was coming back lacked that spark which made you fall in love in the first place. What do we learn, when we attempt to recapture that which has already come and gone?

We are different people. We change, and as a result of our alterations, experiences, wisdom, failures etc. we cannot help but view those things we once loved differently. If they don’t change with us, then what is the point? Familiarity is safety, and safety begets nothing. If we don’t take a risk, we stagnant forever, doling out our futures in coffee spoons, afraid of our own shadows creeping up on us, the telltale spinning of the earth and rise and fall of the sun demarking the passage of our days until twenty-seven years have passed us by. If the media we consume ceases to alter with us, it loses its purpose and relevance. And when the media we consume does alter with us, we can never view the source material the same way again.

Cherry pie and coffee are that beautiful sunset, grown rosy with time, despite its many hurdles and pitfalls. The bittersweet culmination of Fire Walk With Me, once derided, now adored through the lenses of time gone by. Safety and comfort of a familiar surrounding. Our perspective changes on material which does not, for good or for ill.

Time and time again, it has been said that The Return is like nothing that’s ever happened before, on television or in film. We have returned to the world, but it has grown with us, it has changed and altered and to some it is almost unrecognizable. There are flashes of what Twin Peaks was, but like it’s audience it isn’t and can never be what it once was again.

We can return, and Cooper can return, but neither we nor Cooper can go back. They aren’t the same thing, no matter how much we wish it could be. And even if we’d gotten the same cherry pie and coffee routine, we would be both lesser for it, and left even more dissatisfied than those who are unhappy believe they would be. It would be hollow and empty, meaningless, purposeless to rehash the exact same things that happened in 1989 and 1990. More is not always better. One cookie tasted great. Two is even better. Six or seven in, you begin to regret that you ate them all, because the taste is no longer satisfying or novel. 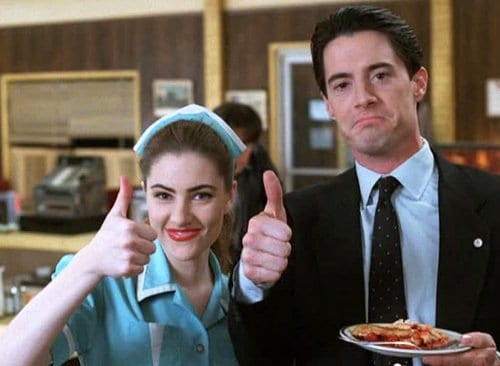 The Return is the ending that Twin Peaks deserved and more. To have done anything less would be to do a disservice to that world which so many fell so deeply in love with all those years ago. You can’t always get what you want, but sometimes you get what you need, and occasionally, you get what you deserve.

I have tried to maintain this perspective while watching The Return, and found myself tested, pushed to my limits the night of the finale. But acceptance and even joy have been quick to arrive for me, and, I think, for many others. The rest might never make their peace with what occurred on September 3rd, 2017. Yet others might find The Return go the way that Fire Walk With Me has for so many, and with time, distance and an altered perspective, find the peace that they can’t right now.

What is most fascinating about this aspect of The Return, is that it hasn’t just happened this way for fans. It has also happened for Dale Cooper. The single biggest audience mistake (I think we are all probably guilty of this, myself included) was believing that Dale Cooper had everything under control. Dale’s single biggest mistake is also believing that he had everything under control. If Audrey’s situation is any indication of the way Lodge-time works, your body grows old, but who you are is frozen, unaltered from who you were when you entered. Her conversations with ‘Charlie’ seem childish in contrast with her age.

Dale never had a chance. It was thrilling and heartwarming to hear him ask if the coffee was on the moment he gained contact with the Twin Peaks Sheriff department, but it is also the indicator of his state. Even in Part 16, Dale “I am the FBI” Cooper hasn’t quite realized that no, he isn’t the FBI anymore. He’s the same Cooper who went into the lodge, at heart. He thinks he has some new insight, some level of enlightenment, but he has failed to see that the world has turned many, many moons without him. Dale is returning, but he thinks that in doing so, he can go back. Even more importantly, he thinks that he can go back even farther, thinks that changing things is wise, because the past dictates the future, and if he can just change the past, he can change the future too.

His crime is hubris. He believes that he can alter the unalterable. He is a Gatsby, desperate to re-achieve that which never really existed in the first place, that which he, in all his time in the lodge, idealized. Home. As he leads Laura away through the forest, that word rings uneasily. He is dreaming of a Twin Peaks where everything could be ‘fixed’, that the past twenty-five years could be hand-waved away, with a living Laura, and his knowledge of BOB to save the town and its inhabitants. But just because everything isn’t the way he wanted it to be, or the way we wanted it to go, doesn’t mean it needs fixing. Some things just are, and the more real the world, the less perfect it is and the more broken things are, which is the way that they are meant to be.

It is a hard feeling to come to grips with, for Dale and for the audience, even those who liked the way it ended from the get go. It is hard to accept that imperfections, evil and atrocities are a part of life. If Dale were able to fix everything, what would that narrative do for us? What depth would it bring? Or what degradation? Has Dale learned his lesson? That the knights of myth are exactly that – dust on the covers of romantic old tomes and he can’t fix everything? It seems that perhaps in the final moments of Part 18, he is seeing that truth clearly for the first time.

This is the theme of the Return, and it’s theme music was the Eddie Vedder song from part 16. Chances not taken in the now cannot be gotten again. We are who we are in the moment, who we were can never be retrieved and who we could have been had we done things differently, can never exist. This goes far beyond Dale and his situation, beyond television and film. This is a lesson that every person who watches can relate to, whether we like it or not. It is a hard lesson to employ in life, and though we can’t go to the same lengths as Dale to retain the rosy visions of our pasts, we may end up trapped just like him, forced to live with the repercussions of whatever failures that belief drives us into. 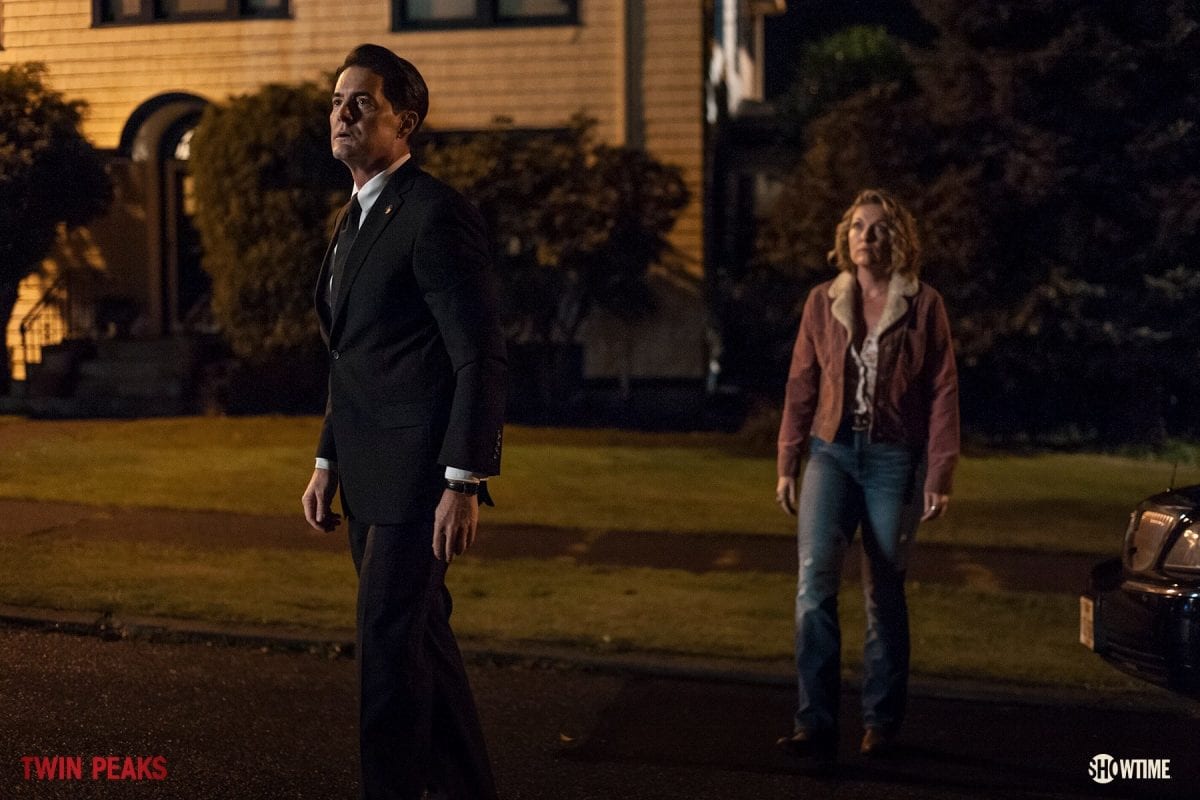 In another twenty-five years, when we’ve grown older, maybe wiser, and return to The Return once more, it will also be viewed differently, no matter how we feel about it now. But, in this moment, I come away with this lesson solidly reinforced. Dreams are beautiful things, they inspire and they motivate and they guide, but there is danger there too, and some fear in letting go, fear that can cause us to live within the dream. Where will we be when we awake from that dream? Blissful in our belief that we can go back, like Dale was? If we live in the dream, our lives will pass us by. Dreams are meant to guide us into reality. Through The Return Frost and Lynch leave us with the bittersweet knowledge that the only way we can grow is if we set aside the dream, sometimes, in order to actually live. And as bitter a pill it is to swallow, as little as I like to acknowledge this truth, I’m immensely grateful for it.