49 years after The Prisoner aired its conclusion, Twin Peaks came back to our television sets to once again be the only thing near its orbit. Today (literally today—September 29th) The Prisoner turns 50 and I think it’s time we start talking about it here officially.

There are a number of ways Twin Peaks and The Prisoner are kindred shows. Look for more than one minute and you should see over a dozen reasons, easy. One of the more important ones is location itself. Just as there is a Lodge where Cooper is trapped, the unnamed lead character referred to as Number Six by the other numbered people around him is trapped in a highly eccentric location known as the Village.

It is as gorgeous and evocative as it is creepy. Just as Cooper’s goal seems to be trying to get out of the Lodge (whether or not this is his actual end game, it’s certainly the immediate goal), Number Six fights to his core each episode to leave the Village for good.

And do we ever find out exactly who Number Six is? He’s just as likely to be John Drake (McGoohan’s spy character from Danger Man) as he is Patrick McGoohan himself, or some random character who will not be numbered etc. We never learn the simplest detail of our main character’s name! Sound familiar?

And why does a massively powerful organization feels the need to hold this unnamed man captive? Is he a threat to national security? Is he a dangerous man? He’s a clever, thoughtful man who resigned from his job (whatever that was) and that’s about all we’re allowed to know. We don’t even know his occupation before this, not officially. But we do know his crime: Keeping information to himself. He’s filled with secrets. In all seventeen episodes, the only question the Village wants to learn from Number Six is this: “why did you resign?”

It’s a fairly mundane question for going through such elaborate lengths to break him, but Six is a stubborn willful man who believes in his convictions and refuses to believe the answer is anyone’s business but his own. 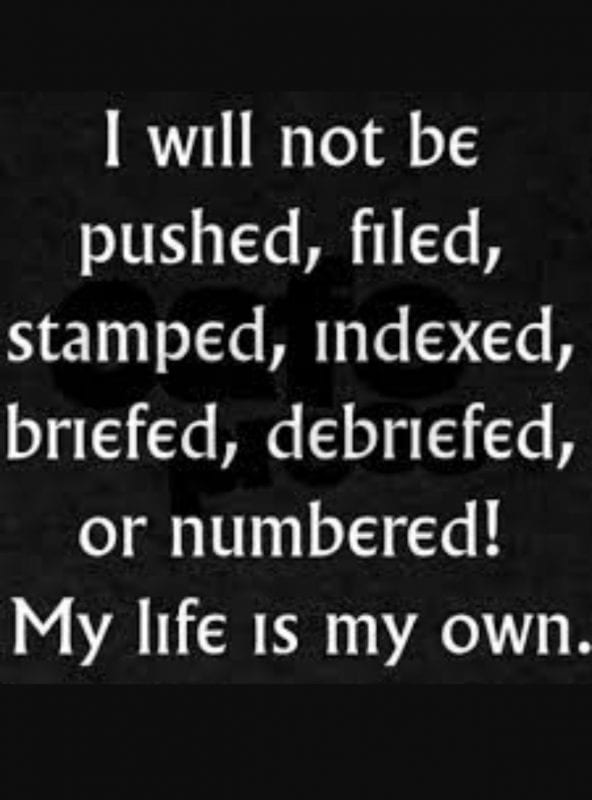 Yet the Village, run by a revolving cast of men and women known collectively as Number 2, refuses to let him have that information to himself. They must know this information, by hook or by crook. They won’t tell him who Number One is, won’t offer any answers themselves, but they try everything from mind control to political elections to body swapping to altered reality in order to get their answer.

Very much in keeping with the message of “Jow Day” where explanation is the enemy, am I right?

Just as Six shows up on Number 2’s monitors no matter where he goes, Cooper’s constantly being watched by Gerard. Gerard and his curtains appear everywhere, even in a coffee shop in Las Vegas that gives a hapless Cooper/Dougie a cherry pie. You never see who’s in charge of the Lodge either, implying any number of things if you know how The Prisoner ends, but I’ll get there sometime later. For now, accept the Village and its residents are surreal and fairly dream-like, and at minimum highly allegorical.

Each part of The Return dealt with a theme, whether it’s domestic violence or paternalism, and each episode of The Prisoner covered a different human condition, sometimes putting Six into a machine that allowed his dreams to be monitored, sometimes in position to save a damsel in distress, but always taking an angle on Six’s personality to see if they can unlock the answer they seek. Just as The Return wants us to ruminate on parts of the human condition under the ruse of an FBI agent returning to our world, so did The Prisoner, all in the guise of a spy thriller as the protagonist tries to return to his world.

Just like Twin Peaks was poking at modern tropes of the day (and still is, even with the superhero genre), so did The Prisoner. There was even a spy-themed episode and a western. There is more structural similarity worth exploring than this, just suffice to say The Prisoner is working on as many multiple levels as Twin Peaks ever has.

At the end of every episode, The Prisoner could never escape. It always went back to starting positions. Just like the repeated footage of Gerard asking is it future or is it past on that couch, or Laura whispering in Cooper’s ear one more time, each episode began when Number Six would woozily lift himself from bed in the exact same footage and he’d open the curtains trying to achieve his escape regardless of futility. And how does every episode end? Just like DoppelCooper’s head trapped in that jail cell box in the White Lodge. The sound of a cell door slams and the bars close over the face of Number Six. 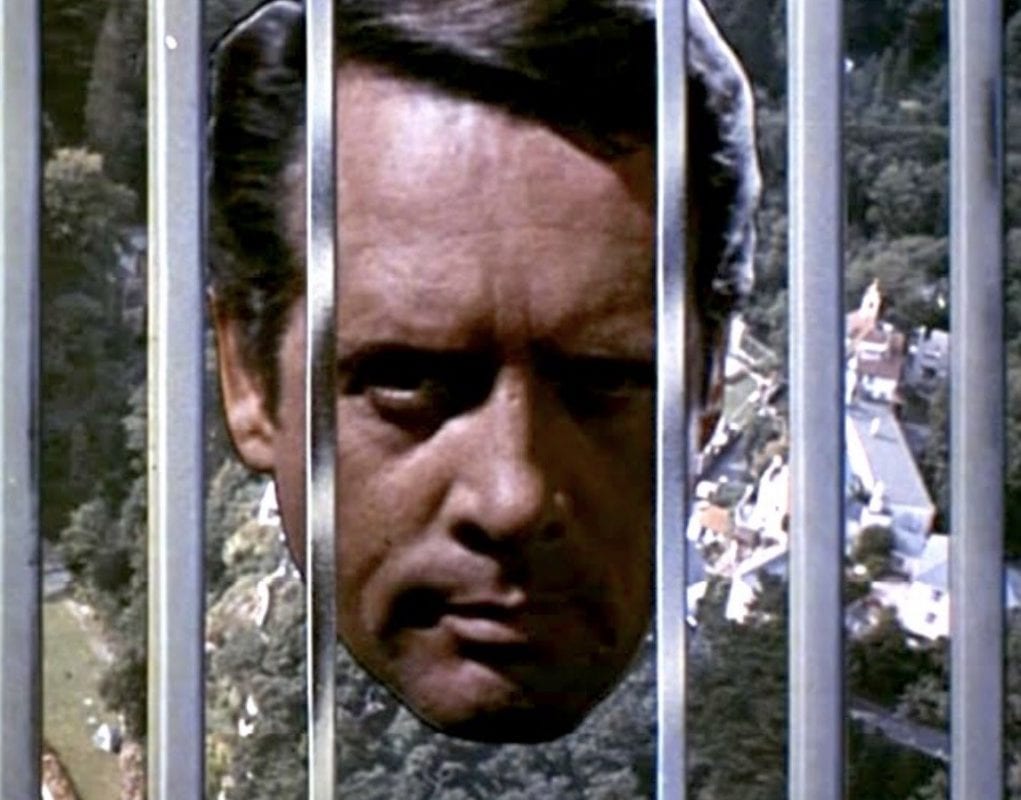 There’s a particularly near-in-concept episode where Number Six makes it out. He gets on a boat, makes it to mainland. He even arrives in London proper, meets up with old friends. But it turns out even there he’s somehow still in the Village and the cell bars close in on him even at the end of that episode. They’re always watching him, always finding new ways to coax the secrets from him. I’m previewing my premise right here for when I compare the shows’ finales: I think Cooper is doing this exact same thing when trying to find and save Laura. They both are unable to escape the worlds they’re trapped in. And they both persist against all odds.

On the meta level, there are definite parallels between David Lynch and Patrick McGoohan as people. Both work to the beat of their drummer and theirs alone. Lynch was getting the rock star treatment with Isabella Rossellini when he was beginning work on Twin Peaks, and he’s famously done seemingly everything in The Return from sound design, final approval on set pieces and costumes, to of course the directing and even acting. McGoohan was an incredibly popular star who walked away from the immensely popular Danger Man because he couldn’t live with himself doing the same spy role over and over again, and he outright refused the role of James Bond before Sean Connery even entered the conversation. Instead he poured his entire soul and sanity into creating, writing, directing, designing, producing and staring in this expensive little project called The Prisoner that lives on to this day and is the only thing that’s ever been on television that could even slightly compare to Twin Peaks’ nature. And both men almost went down with the ship when audiences were refused answers they believed they were entitled to and turned on their shows.

But it’s not Lynch who knows The Prisoner strongly. That’s Mark Frost all the way. It’s one of his all-time favorite influences. I started this project because I seemed to be one of the very few who sees Mark Frost’s influence within Part 18, but it’s not the direct references to The Prisoner in Twin Peaks that interests me as much as how the show opened Frost’s eyes to the possibility of what storytelling can do for—and to—its fans. When it originally aired, The Prisoner activated Frost’s creativity like Twin Peaks does ours. He was happily activated by the show to work on answering the show’s questions about philosophy and privacy, identity and self, and of course free will. He also internalized how the show asked the most tantalizing questions that can be answered in at least fourteen different correct ways. From the look of this website and countless other fan communities, I’d say he internalized the lessons well.

In the coming weeks I will be comparing the finales of The Prisoner and Twin Peaks: The Return, and I think it’ll open your eyes fairly wide.

In the meantime while I put that together, I encourage you to read Joel Bocko’s The Prisoner viewing diary for the same attention to detail that he legendarily puts into his Twin Peaks analysis. I also heavily recommend subscribing to the Time For Cakes and Ales podcast for their new-as-of-yesterday subcategory “The Tally Ho!” which will have behind-the-scenes information on The Prisoner as well as episode recaps. TFC&A’s Twin Peaks subcategory “Time For Cherry Pie and Coffee” is tied for first in the multitude of Twin Peaks podcasts out there, and I believe our minds are melded together somehow. I truly love listening to them.

Electricity Nexus will move around to other topics, but I will be returning to The Prisoner soon after, comparing its Episodes 16 and 17 to The Return’s Parts 17 and 18. I expect we’ll see more mirroring than you’d first expect. Be seeing you…