“Father, let us build a boat and sail away

There’s nothing for you here

And brother let us throw our lot upon the sea

It’s been done before

You loved me when I’m here

Then you can miss me when I’m gone

I’m a one eyed seed in a tumbleweed

In a belly of a rolling stone

Back on the highway

Back on the road again.”

On the road. Jack Kerouac, Allen Ginsberg and Bob Dylan. See ya later, Allen Ginsberg! Hunter S. Thompson was there too. Not as a beat, but as a truth telling storm. His words on Nixon defined a world view that would not be subjugated or enslaved. On the road, it all becomes clear. Twin Peaks: The Return ended how it began: in mystifying, surreal and beautiful circumstances. Not to be a victim of cliché, I don’t really want to say that the journey is the thing. But it is. The journey is where you can set things straight. When I was very young my parents took me and my brother to the West of Ireland. Sligo and Mayo. On the way, we would listen to four plus hours of specially prepared music. I remember the year I first heard The White Album – no, not The Beatles, the goddamn White Album! – and when I was immersed in Roy Orbison’s “Crying”, and Don McLean’s cover of same. This was before the menacing beauty of David Lynch. Yet, there they were, those feelings, wrapping me up and smothering me in a desperate and holy fashion.

Watching the finale of Twin Peaks: The Return was a shock and a thrill, and a devastating realization of the fragility of life, and the short time that we have to say I love you. The first time, I felt a deep uneasiness and discontentment over the length of the (seemingly) incidental scenes. Those driving scenes. Jesus. They wouldn’t end. And we had already gone through fifteen episodes of Coop not being Coop and here we were again where he wasn’t saying anything. The second time I understood, deep in my heart. A glowing sense of understanding and peace. To be with someone is not to be with them in action or declarations of love or any other grandiose explications. To be with someone is to be with them on the down low. In the moments when things are just there. To take a hand, or to offer one, on a long drive home. I’m here with you now. I will stay with you, as long as you’ll have me.

Twin Peaks: The Return is a show that doesn’t take any easy shots – Hell, even Gordon Cole’s hearing impairment is utilized judiciously and without overt movements – and the finale is no exception. It leaves you with the characters, as if they’ve just come in and sat on the edge of your bed. Coop is with you now. Diane is with you now. “Just like a hole in the head, I’m free. Hey mister, that’s me up on the jukebox. I’m the one that’s singing this sad song. Well I’ll cry every time that you slip in one more dime. And let the boy sing the sad one, one more time.” When you look over and you realize, this is the person I want to spend my life with. Passing time in no hurry. Passing time in a lonesome manner. I missed you. I am sorry to those people who I betrayed. Coop and Annie, “I don’t know no love songs and I can’t sing the blues anymore. But I can sing this song.” This is what I am, now.

In the car, on the way there. Diane and Coop together after all those years. And they are just comfortable to be with each other. This is a love that cannot be easily defined. To be silent. To hold back. On the way there, every movement made means something. On the way back. Laura, the woman who defines a powerful and unconditional love. Coop stepped out and saved her. That was the plan. And now she has another shot. Without the scars, without the misery and desolation. Step out and reclaim your life. All of that is expressed in the silence. All of that is shown through the minute facial expressions. Thank David Lynch for being specific as all hell, even while he is mystifying with his surreal genius. David is a great study of human behavior, which is why his movies strike such a deeply felt chord, even when they befuddle and confuse.

The trip back… You found her there, where they said you would. “Gee but it’s fine to be back home again.” The odyssey back to Twin Peaks for Coop was a journey some thought would never end. There were many who lost faith on the way. There were those who raged at Dougie Coop and the confusion that he provoked. Here’s the thing though: Dougie Coop is the purest expression of what Twin Peaks is. That is: the pure of heart, and the pure of soul are those who we should follow. Those who approach life from the perspective of innocence and optimism are those whom we should listen to. Those who take the cynical approach are those whom we should be wary of.

When you spend time with a soul; I mean when you really spend time with someone, you understand something deeper than their likes and dislikes. You understand why they love you or why they don’t, and either way it goes, you are the better for it. The trip back in The Return is something that gets to the heart of this. Those scenes that take place behind the wheel. Few words exchanged. Few thoughts expressed. And yet there is something pure and holy about it all. In understanding these scenes and moments, you understand the greater design. To be with a man; to be with a woman. To be with someone who makes your heart beat… to stand back and recognize yourself like you have never done before. To be the person who makes them get up in the morning. I’m sorry, I love you. Hold her close.

Coop wanted to save Laura from the horror that was inflicted upon her, by the evil that lives in all men and women. And he did, in a way. In those moments between the bars, as Elliott Smith would say, the viewer gets a sense of how Laura is, not in those grandiose or extreme encounters, but in the low moments. In the quiet moments. In the we’re alone now moments. When the guests have left, and you’re there, half collapsed under the dining room table, and hoping for quick respite from your pissed-off partner who has tried in vain to get asleep for the last four hours. The Return showed us who Laura Palmer is, in a way more subtle and intriguing than anything we could have conjured with fan fervor. This also applies to Coop, whose quiet moments define him in a way that his most identifiable characteristics just plain don’t.

Twin Peaks: The Return may not have given us what we wanted, but as the man said, it gave us what we needed. This is something that we should cherish. It’s a long road home. It has many treacherous paths, and we need to hold strong and persist. This is Laura, and this is Coop. This is Carrie, and this is Richard. Different names, same souls. When they are with each other in those quiet moments, we see who they really are. Put your cynical or doom-laden prophecies aside: this is peace for us all. This is peace and rest and joy. The lights go out, the electricity ceases and we’re just two people talking about the day that was had. That’s what Laura and Coop missed: two souls in bodies enjoying the slow, deliberate pull of the day. 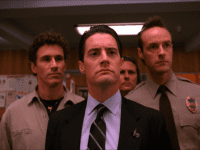