Sometimes when we find Twin Peaks fans through our journeys, we tend to have a little something in common beyond our love for David Lynch, Mark Frost, and the show. I met Mya McBriar at the 2017 Awesome Con in Washington, D.C. after reading her work in the Blue Rose Magazine (more on that in Part II), and it turns out that we grew up about twenty minutes from each other. What’s more fascinating is that it wasn’t until that event that I realized my New Jersey roots may have had more of an impact on my love of Twin Peaks than I thought…

Mya was still a kid when Twin Peaks debuted in 1990. She has a beautiful memory of sitting Indian-style on her childhood bed, watching the pilot episode. She had a tiny 13-inch television in her room, and she clearly recalls the scene when Ronette Pulaski walked off the bridge in her tattered lingerie. That iconic scene was so profound to Mya. Although she wasn’t thinking of the scene in an analytical way at the time, she knew Twin Peaks was unlike anything else on television, and certainly unlike anything she’d ever seen before. 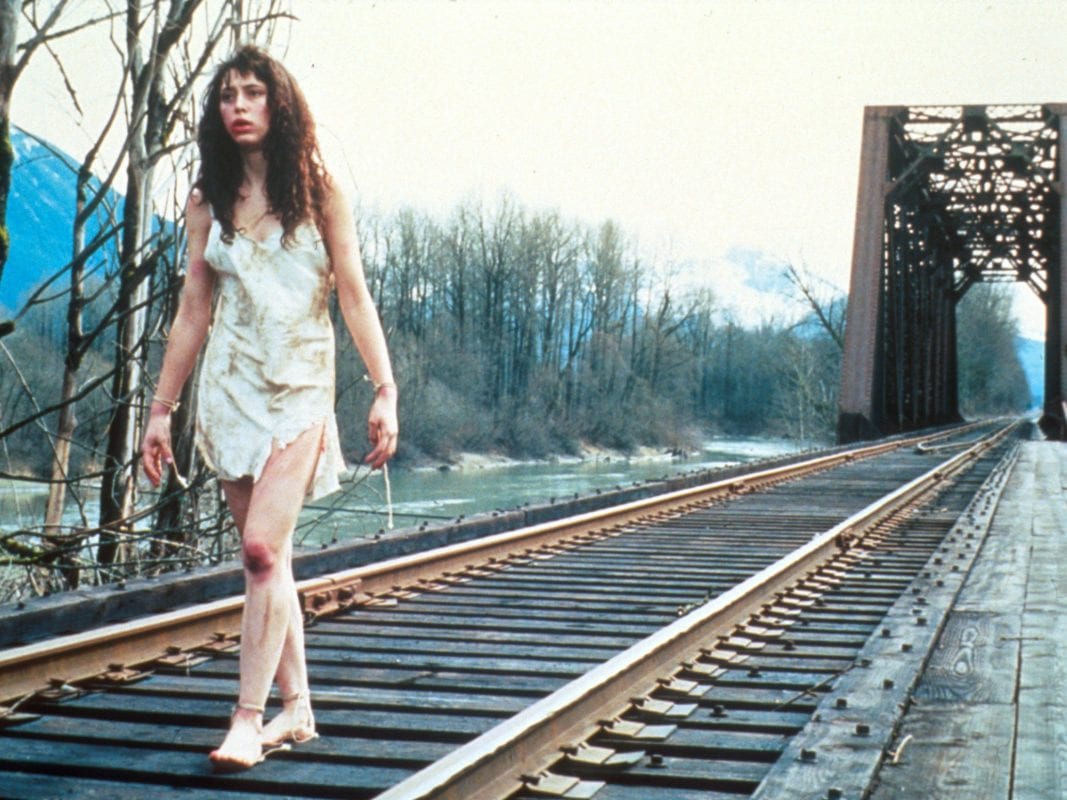 “David Lynch’s surrealistic visual style of storytelling was something that I could only process on an emotional level in 1990. I’m sure the cerebral elements, the mythology, etc., didn’t start to click until I was older, and after many rewatches. The sadness surrounding Laura’s death was definitely what drew me into Twin Peaks the most from the beginning. Maybe because I was a young girl or maybe just because [the show] was that good, and different; probably both, but nonetheless it captivated me as a viewer. The only thing I could compare it to at the time was likely Hitchcock’s films. Growing up my parents always encouraged me to watch classic movies. I remember watching Vertigo many, many times at around 6 or 7 years old. I think maybe I was a little obsessed with that movie. [Jimmy Stewart’s character] Scotty’s obsession with Madeline/Judy, and his profound sadness at the loss of Madeline, moved me deeply.

“When I saw Twin Peaks, I think it was that similar kind of sadness about Laura that attracted me. Here were these beautiful women who met tragic and very mysterious ends. [Laura and Madeline/Judy] were charming and adored, but they had secrets. And those secrets were the things that not only made them interesting, but that also were part of why they died. That aspect fascinated me. Twin Peaks’ mysteries weren’t just about Laura though, it was the whole damn town.”

Speaking of towns, while Mya and I lived in Northwest New Jersey, we did not meet until last year at the D.C. Awesome Con. While I viewed some of our shared regional weirdness as just that—namely old ghost stories, Revolutionary War-era historical oddities, and often-sanitized Native American folklore—Mya has a different viewpoint:

“Growing up in Northwest New Jersey was really weird. I lived in a remote town, but in this pretty little country club development that was surrounded by mountains, farms, and rural life. I could walk or ride my bike to a convenience store, a video store, a pharmacy, and/or a small diner-like eatery. Everything else I needed a ride from my parents to get to. In my childhood I loved it, because I was free to roam and run outside with my friends as much as I wanted. I liked school when I was young, but as I got older it numbed my buns. By adolescence, that place became a major hindrance to my social life: my family life changed, my friends were changing, and I grew to hate it. I wanted to escape. I was cliché. I dreamed of running away all the time. I laugh at myself thinking of that stuff now. At the time, it seemed like the biggest thing.”

“For some reason while writing this, I keep hearing Anthony Hopkins’ version of Hannibal Lecter’s voice in my head from The Silence of the Lambs:

“That seems like the overarching theme of my teen years: daydreaming, sneaking around, getting into mischief, feeling like I was special for my feminine wiles, but really, and I fully understand this now, it was just my variation of things that have happened all over the world a million times over. It wasn’t special at all, but it did have all the ingredients needed to feel like Twin Peaks, and there was an undercurrent of darkness. Maybe it wasn’t Bob and the Black Lodge; it was more like overindulged rich kids with nothing to do, and whose parents weren’t paying enough attention. It felt like Twin Peaks meets Knots Landing meets a watered down Bret Easton Ellis novel. My friends and I were like Less Than Zero if it went country, and had far less drugs and glamour.

In addition, so much of the history surrounding my hometown was littered with ghost stories, creepiness and American Indian history. I could look out my bedroom window and see a mountain. The wind in the trees was right there before me. I had friends that lived on the semi-known, Shades of Death Road, and I thought nothing of it. Soaked in that environment just made Twin Peaks even more relatable to me. I wrote about this in detail on my blog in a piece called, Laura Walked With Me, and it is probably the writing I am the most proud of to date. Laura’s demise felt like something that could have easily happened in my town. It was Anytown, USA where girls like Laura fester. David Lynch has said that he doesn’t like the woods on the East Coast of the United States, but I wonder if he would still feel that way if he knew about the area of New Jersey that I grew up in.”

Mya first saw Twin Peaks: Fire Walk With Me with her girlfriend. They weren’t even in high school yet, but they got into the theatre. She remembers that she and her girlfriend were the only girls in the theatre and that it was nearly empty. She had no idea what they were in for, but Mya doesn’t think it’s an understatement to say that Fire Walk with Me changed her:

“That was the film that set my heart on fire for David Lynch. It made me want to see all of his work. Mostly though, Fire Walk with Me made me so incredibly sad for Laura, and absolutely terrified of Bob. But I loved it! I loved how it scared me. I loved how it made me cry, and I loved how it made me think. That movie got me thinking about people, and how fragile they can be. It made me love mystery, and definitely horror even more. Fire Walk with Me became everything about Twin Peaks that I loved for a while. Until, of course, I finally got the entire series on VHS.

“I remember I purchased the entire VHS set at the Sam Goody store, the only copy the store had in stock mind you. That was years after Twin Peaks ended and I had seen Fire Walk with Me. That damn set didn’t even include the pilot episode. That took me another two years to find. Plus, my VHS set had horrible lines that ran through episodes 10-14, the key episodes that tell us who killed Laura Palmer. I was devastated. It was so bad that it was almost unwatchable. I went to the store and reordered it about four times before I got a good tape. I’m sure the cashiers thought I was nuts, because ordering it meant waiting six to eight weeks for it to ship from a warehouse in California. Then I had to go back to the store to pick it up. Now you can find anything you want on Amazon, Ebay or Etsy and it will be shipped to your home with ease. It’s amazing how things change, and definitely for the better in Twin Peaks’ case.

You can find Mya on Facebook or Twitter by searching for @twinpeaksblog or you can read some of her work on her blog at twinpeaksfanatic.blogspot.com. You can also read her articles in Issues 1 and 2 of The Blue Rose Magazine.

Next Time: In Part II, we’ll learn about what “I’ll see you again in 25 years.” has meant to Mya.