This is a guest post by Pamela Tarajcak, friend of the site and moderator at “Twin Peaks: Between Two Worlds” Facebook group.

The scene is well-known from Season 1 Episode 5, “Cooper’s Dreams.” Four men trudge through a forest trying to find a cabin where the beginnings of a night of crime occurred. Throughout this scene, a raven watches and observes from a distance. We see owls in Twin Peaks everywhere, but when this corvid shows up, what are we to make of this? World mythologies, largely from the Pacific Northwest Native Americans and the ancient Celts and Philosophy produces interesting conclusions.

The simplest possibility is a symbol of Laura’s death because the raven is a carrion bird. Simply speaking, it’s just hovering over where Laura lived her last night. Moreover, in Plato’s Phaedo, Socrates execution “hangs over friends’ heads, as a raven…. we may expect that the friends, young and old, are painfully aware that Socrates will, in death, inhabit their lives perhaps more palpably than he did in life.” (Hamlet, 21) Doesn’t that sound as he is describing Laura too, whose death hangs over all the show and whose presence in death radiates “more palpably than [she] did in life?” 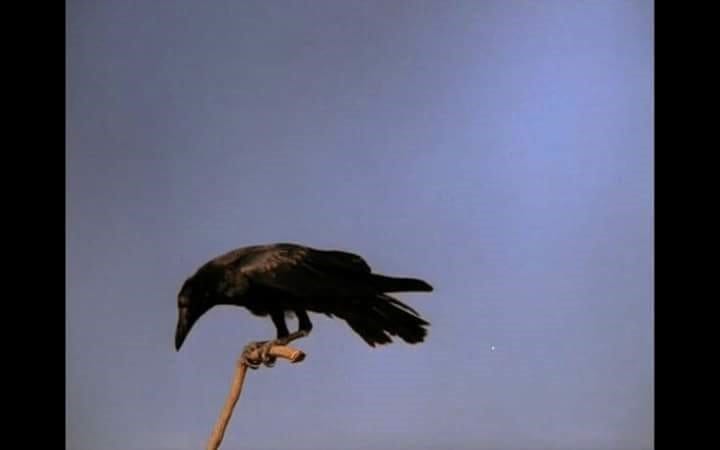 It could be the Fireman. As the Black Lodge Spirits, especially Bob, transform into Owls, could it be that The Fireman transforms into a raven? Proofs lie in Native Pacific Northwest, Scandinavian, Greek, and Arthurian mythologies. In the guise of Kwakwaka’wakw, Raven brought so many gifts to the Peoples, including sun (a golden ball) and fire (Hawk does say that the intent behind the fire is key) (Walker, 35). Moreover, according to Harold Charles of the Quileute Nation of Washington, Raven keeps the Peoples, sees all, observes all and is a guide to good behavior and patience. (Walker, 36-37) A Creator figure, the Raven has been with the people since the beginning (Walker). He is present in many stories of shamans, healers and visionaries (Krupp, 96).

In Greek Mythology, he helps the god Apollo who is the god associated with light, truth, goodness, excellence, divine inspiration, and who averts evil and informs the soul. (Krupp, 94-95). In more than one mythological structure, ravens are symbolic of prophecy and transformation. They are also connected to the Celtic gods Bran and Lugh, who both are deities of goodness and light. Bran, a healer, is especially of interest because he is where we get our term for grains of cereal (corn, in ancient Latin, was frumentum, which simply meant cereal) (Sax, 64; Green, 180). This sounds like the Fireman. He sees all though his theatrical viewing device. He teaches patience and instructs Cooper throughout the series. He is generally thought to be a positive figure. Could the Fireman be observing Cooper and figuring out ways to help him?

In Scandinavian mythology, the god Odin has two ravens Hugin (thought) and Munin (memory) who watch out for the whole world. And oddly, in another form of Scandinavian Mythology, a raven guided Floki Vilgerdarson to the island of Iceland (which is an interesting implication as this is the same episode which introduces the Icelandic businessmen) (Novak 36). Therefore, could the raven just be a servant of the Fireman? Is that his “camera” which will show up on his theater?

The Raven’s dwelling place is also of interest. The Raven, according to one Native Nation, lives on Nunivak Island which is an island with a singular mountain perched on it. (Bastian and Mitchell, 37) Castle Corbenic (Castle of the Crow) of the Fisher King in Arthuriana is either found on a desolate coast, an island, or the middle of a dense forest. “It is not found by seeking, but, if a knight sets off in search of the castle, destiny my lead him to it.” (Sax, 66). All three options sound like the locations of some of the mystical locations in the series: The Mauve Zone and its desolate shore, the Fireman’s tower island (also reachable by a forest portal), the Dutchman’s, the Convenience store, and the Black Lodge, all located in the middle of forests.

Another diametrically opposed option could be Mother/Jowday; this is especially evident in the mythologies of the Celtic Peoples. In their culture, unless associated with the aforementioned Bran and Lugh, ravens stand for death, destruction, disaster in battle, doom, fear and evil omen (Green, 177-178, 180-81 and Novak, 36). This is especially interesting in the story of the battle of Magh Tuiredh where king Eochaid has a vision of ravens wreaking havoc on the land (Green 178). Ravens have a “close affinity with the supernatural world and indeed can be a form of a female divinity.” (Green, 180). The battle goddesses Morrigan and Badb appear as corvids, gloat over the bloodshed, and ‘reflect the malevolence of the underworld.” (Green 178). Badb (Badbh Catha or Battle Crow) is married to Net an even more shadowy war god (BOB?) (Green 195 and Berrisford, 37). Morrigan, whose name means great queen, descends in crow form on the shoulder of the dying hero Cúchulainn (Berrisford 71 and 163). This all leads to Mother, the negative, the ultimate evil, Jowday. Could she have been hovering around that scene?

Another less provable but still interesting option is the black-sooted Woodsmen. Besides the obvious coloring of both, there’s an interesting connection to the poetry which the woodsman utters. “In fairy-tales, the whereabouts of ‘living’ water is known to those who could change into a bird and get to the place unreachable to common people.” (Deviathkina, 146). “Ravens may have been associated with pits and wells because of a perceived chthonic symbolism: ritual shafts penetrate deep underground, forming a line of communication between the living and the dead, the earth and the underground powers.” (Green 126). This certainly seems Woodsman like. Could it be that one of them was observing the scene for their more powerful Lodge masters?

Lastly, an interesting connection occurs with ravens and horses in Celtic mythologies and coinage. The Goddess Epona, a mare goddess, always is accompanied by a dog and a raven (Green 212). “In both British and Gaulish coinage there occurs a curious image of a horse on whose back is an enormous carrion-bird, sometimes with a small cake or a pellet on its beak. Its talons dig into the back of its mount and the reins are apparently held by nothing except the bird itself.” (Green, 160-161). Sarah frequently saw a horse whenever BOB was around doing his dirty work. The “horse is the white of the eyes.” Also the fact that it carries a pellet in its beak, could it be a little bit of garmonbozia?

So, now that you’ve been presented with several interesting options and given the evidence presented for each, what do you think? Or am I over thinking it and is a cigar only a cigar, or a raven only a raven?