Here at 25YLSite, we handle a lot of heavy lifting. Analysis, interpretation, deep discussion, introspective interviews… you name it, we’ve got it. “Favorites” is our new series that takes a lighter approach to the material we normally cover. Each week, one of our writers will take you through their list of favorites – whether it’s moments, scenes, episodes, characters, lines of dialogue, whatever! – in bite-sized articles perfect for your lunch break, a dull commute, or anywhere you need to take a Moment of Zen. So, sit back and enjoy this week’s offering: Matt Armitage takes a look at his favourite weird moments in Twin Peaks.

I’ve already covered my favourite funniest scenes in Twin Peaks, and to some extent there’s a lot of overlap between funny and weird in Twin Peaks. In fact if you drew a Venn diagram it would look a lot like this: 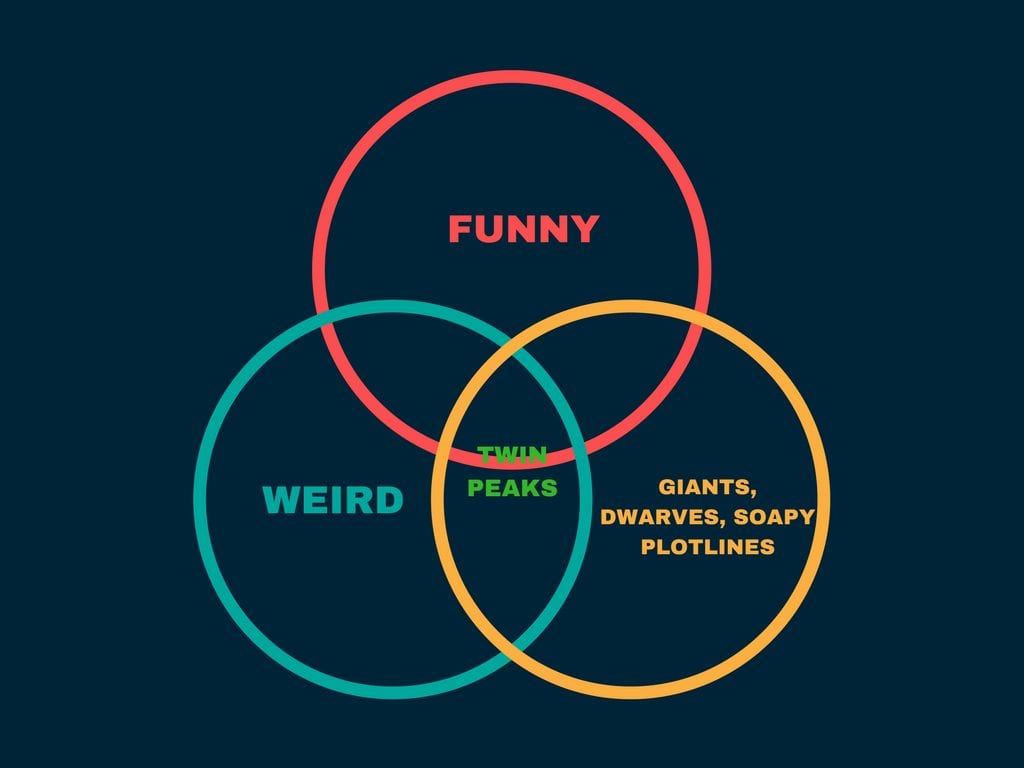 However, weird is a pretty vague word. What I’m going for here is weird in the sense of somewhat surreal, unexpected, maybe even slightly confusing. I’m avoiding most of the disturbing weird or horrifying weird moments – we can save those for another day. Here I’m going to focus on those moments that were just plain odd, off-kilter, and bizarre.

Ben & Jerry Have a Sandwich 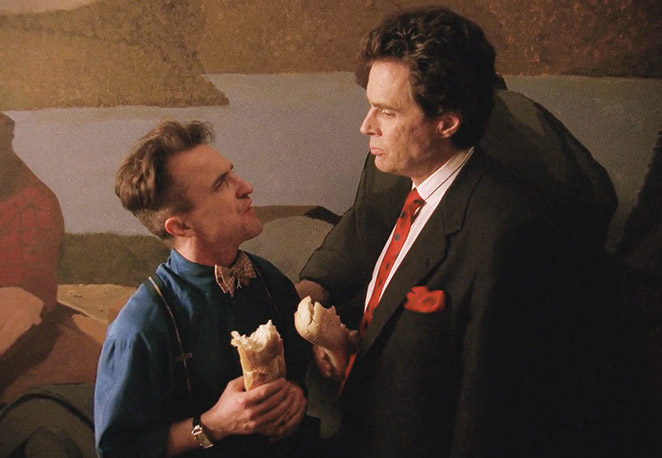 Episode 2 (“Zen, or The Art to Catch a Killer”), was a big bag of weird, which isn’t surprising given it was directed by Lynch himself. It kicks off with the interminable dinner scene with the Hornes, which is pretty weird already, and absolutely not how you’re supposed to draw in an audience at the beginning of the third episode of a new show. Then Jerry barges in with his bag of goodies and everything kicks up a weird notch as the two brothers go bananas over the brie and butter baguette, ignore their family having dinner, then disappear to talk business. 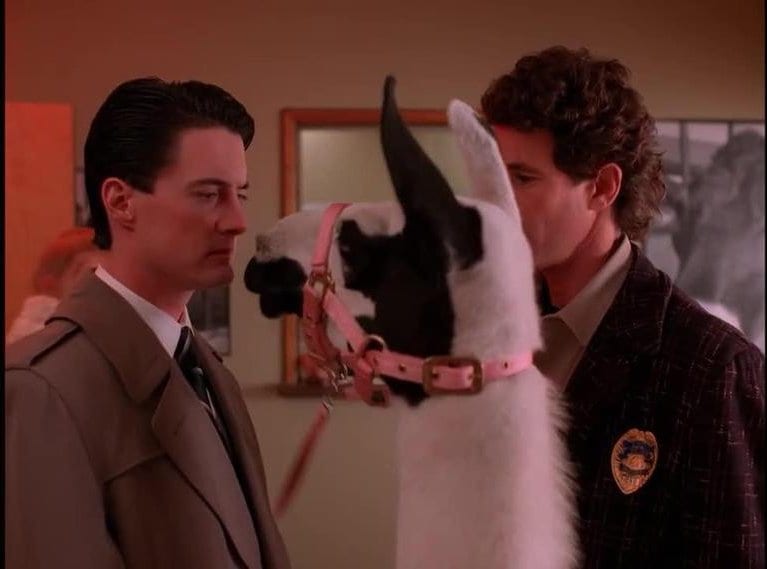 Episode 4. Coop and Truman are following up a lead about a bird at a veterinary clinic when a llama walks between them. Apparently unscripted, Kyle MacLachlan doesn’t even blink, pauses briefly then continues his monologue. Granted, this is also a hilarious scene, but pretty weird nonetheless. 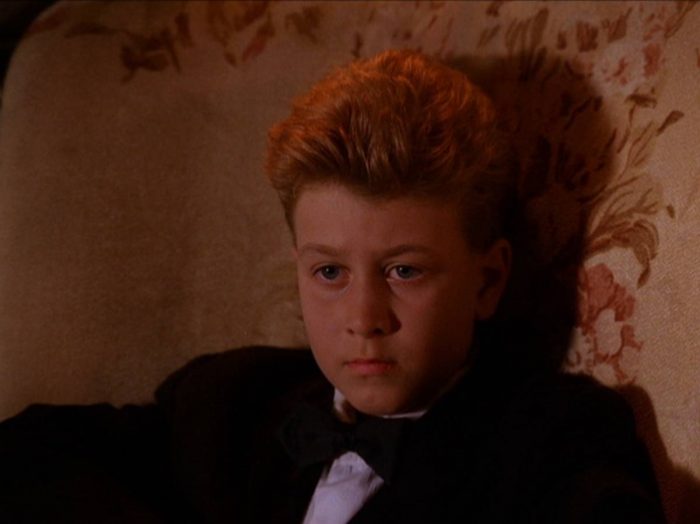 Donna is delivering meals on wheels to Mrs Tremond who introduces her to her grandson who is studying magic. Another Lynch-directed episode, this scene is stuffed with tension, even though we don’t know why or what is going on. It’s our first sight of the Tremonds, and of creamed corn, but we have no idea of the significance of any of this right now, just that some pretty weird stuff is going on.

“The Milk’ll Get Cool On You” 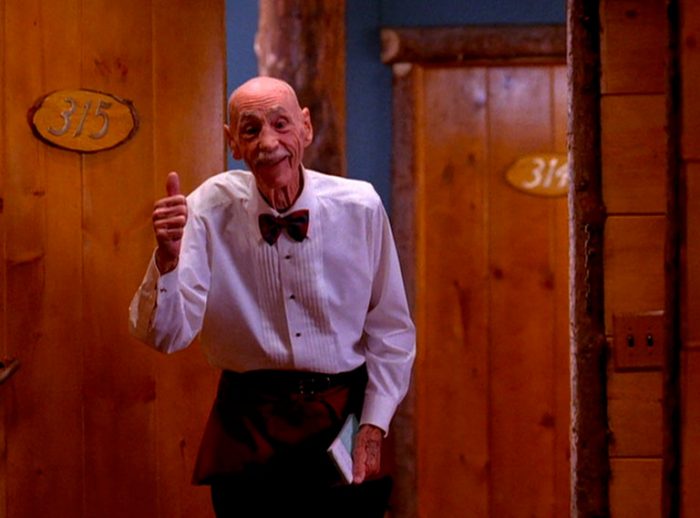 This is how you open a season. Rather than rush into the action, Lynch opened with this five minute, mostly silent sequence of Coop lying on the floor and being brought a glass of milk by an elderly waiter. There is some thumbs-up action also. Lynch loves dragging out scenes to a level that slides it into surrealism, but this one is his masterwork. Nothing much happens but it never gets boring and is instead completely absorbing. You just want that old man to keep coming back. 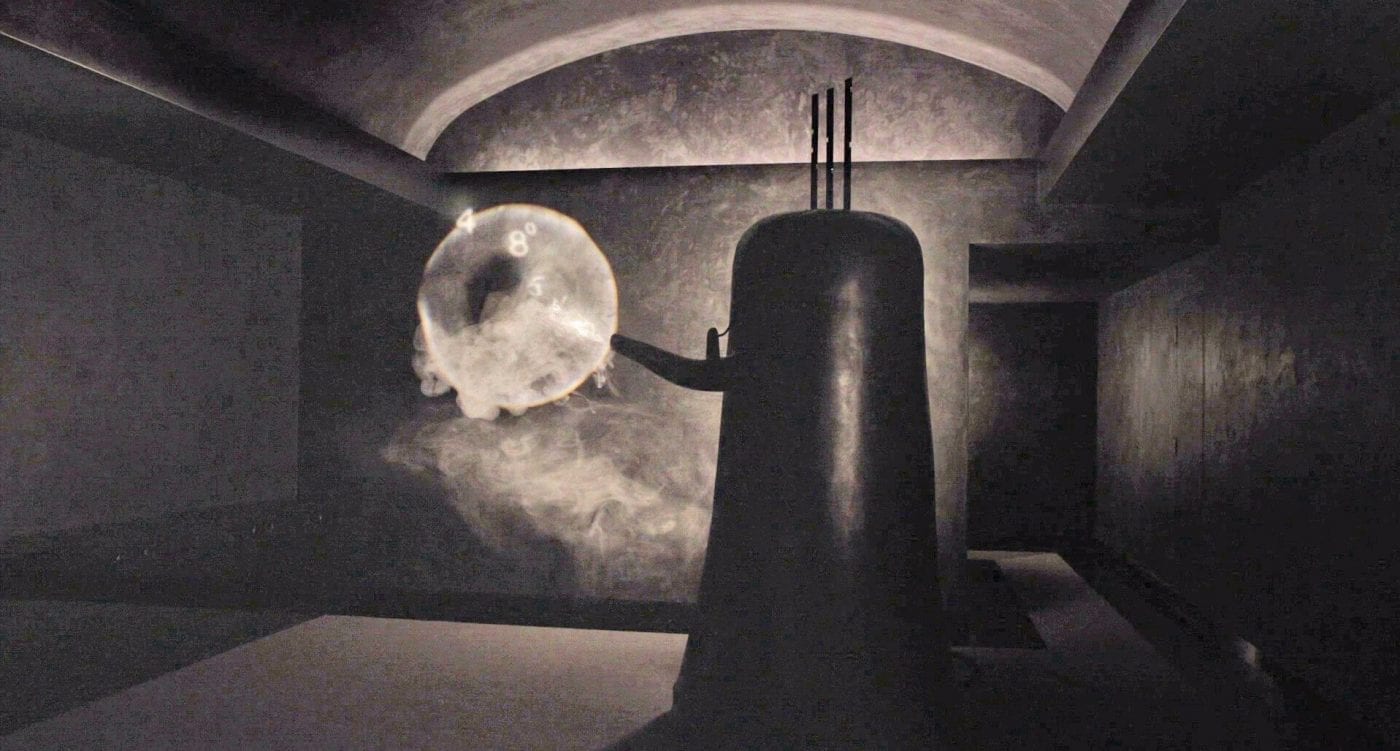 We’d waited 25 years to learn more about Jeffries, and then after a few clues earlier in the season, we find out he is for some reason a steampunk teapot. There is no explanation. Mr C. doesn’t seem nonplussed by this, it must be perfectly normal in the Black Lodge. People are always turning into steam-powered devices. Some of his best friends probably have pistons for lungs. It’s all good. 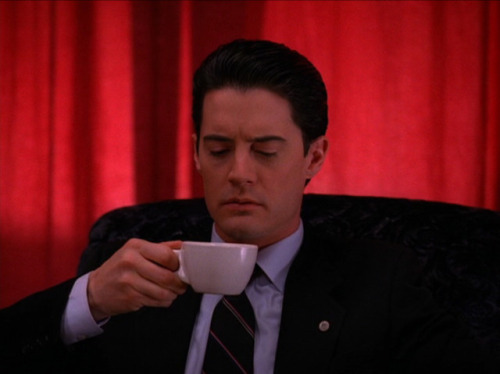 The final episode. It’s that man Lynch directing again. I should probably have just listed all the episodes he directed right? Easier. Coop enters the red room from his dreams and The Little Man From Another Place tells him it is the Waiting Room and offers him some coffee. Everything in the Waiting Room in this episode is weird, but this first scene is more in line with our chosen definition of weird, before we get into the more disturbing, plain crazy bits later.

Cooper in the Mauve World

Episode 3 of Season 3 went full weird in the it’s opening section with Cooper. I’d been slightly worried that there wasn’t going to be any really weird bits after the first two episodes. Ok, there was the thing in the glass box, but that was more horrifying than weird. I missed weird. This scene harks back to Lynch’s earlier Eraserhead style of surrealism than the more quirky original Twin Peaks weird. I wish we could have had more of Coopers adventures in the multiverse before he splurged out of a socket to replace Dougie. 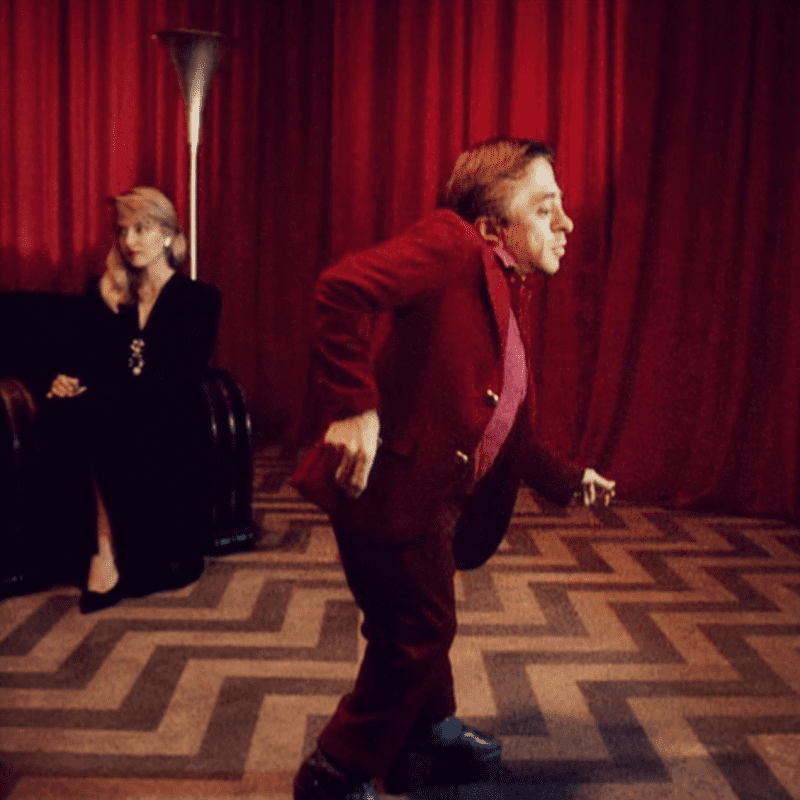 We’d had some hints that Twin Peaks was weird, but episode 2 (the third actual episode confusingly) ramped it up and let those people who thought they were watching a soap opera know that they should probably just switch channels to something else. After the bonkers Horne sandwich fest at the beginning of the episode, we close on Coopers dream of the red room where we meet the Little Man for the first time, sees MIKE, BOB and Laura, and sets up the whole mythology we’ll spend the rest of our lives trying to unravel. This was all footage Lynch shot for the ending of the international pilot, but he loved it so much he decided to cram it into the show anyway, undoubtedly completely changing the entire nature of it forever. Mark Frost must have to be a really easy-going guy to work with Mr Lynch. 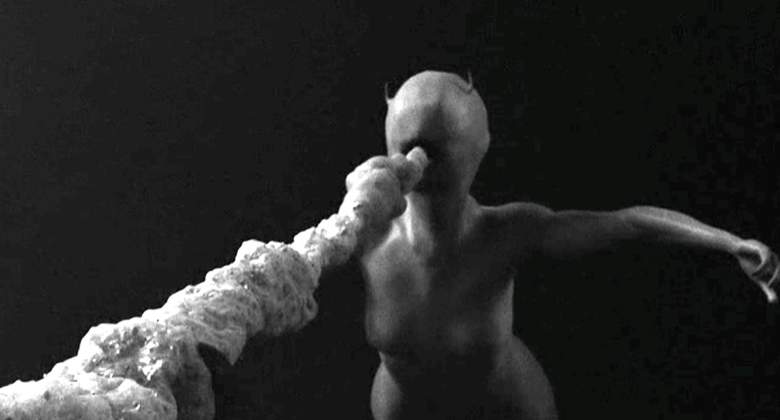 The entire episode. All of it. While I had some issues with the third season of Twin Peaks, this is a joyful near-hour of Lynch just going for it, no-holds-barred. This thing deserves to be shown on repeat in modern art museums. There is so much going on in this episode, all of it weird, that it’s hard to know where to start when discussing it. Lets not. This isn’t the place for that. In some ways it’s the Fire Walk With Me of Season 3. It’s not really part of anything, except the bit at the beginning with Mr. C, which may be connected, and might not be. Why is it there if it’s not connected in some way? Who knows? Regardless. Part 8 was weird. And awesome.