Welcome back to our column showcasing the art and artists inspired by Twin Peaks, and in some cases other Lynch works. This week I talk to comic creator and artist, Josh Howard who is responsible for the DEAD@17 comic books amongst others, and some amazing Twin Peaks comic style artwork.

25YL: How did you first get into Twin Peaks?

JH: I was there from the beginning. I remember watching the Pilot with my mom. I was fascinated by the murder mystery and the world Lynch and Frost had created, but the weirder the show got, the more it spoke to me. But then with the the Season 2 premiere, my mom felt the scene of Bob murdering Laura crossed the line, so I was forbidden from ever watching again. A couple of years later, I’m in high school, have a little more freedom, and rent the Pilot and Fire Walk With Me over and over again. (So yeah, I didn’t find out who killed Laura like most everyone else). It wasn’t until years later, in my 20s, that I finally got to see the rest of Season 2. Up until that point, I had avoided all spoilers and had no idea the series ended on a cliffhanger.

25YL: You have said that Twin Peaks was a big influence on Dead@17. Can you tell us more about why that is, and how?

JH: I began to develop the characters and basic concepts for Dead@17 in the late 90s. Twin Peaks had pretty much vanished from the public consciousness at that point, but it was still very fresh in my mind (as I think it was for most hardcore fans). At that time, I still hadn’t seen most of Season 2, but I still had the memories of what I could recall of Season 1 and the Season 2 premiere, and I think I probably owned the Pilot and Fire Walk with Me on VHS by then.

There were certain concepts that I found very appealing. The idea of the story being kicked off by the tragic murder of a young girl, which then serves as the gateway to learning about secrets she may have kept, all of which happens against a supernatural backdrop – that was probably the strongest and most obvious cue I took from the show. In the case of my story, the murdered girl, Nara, is resurrected, but in some ways, that’s not so different than Laura Palmer in the way she remained present in the series through Maddy and the Lodge.

My character Noel Raddemer, who dresses in a black suit and tie, was a visual callback to Cooper. 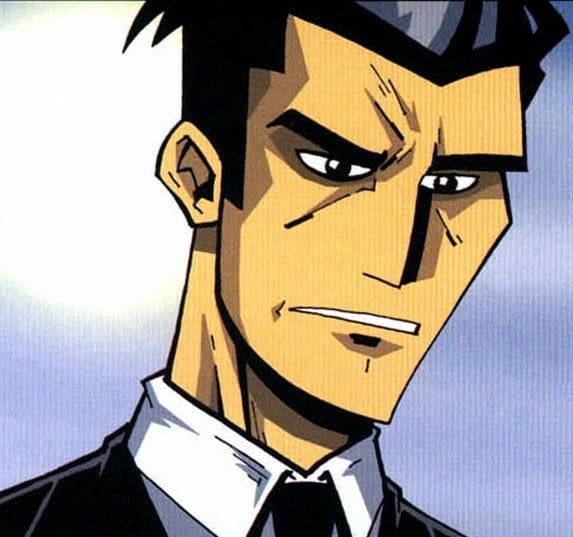 There are other things, like a secret diary and a love triangle between Nara’s best friend and ex-boyfriend, that were more subconscious and not apparent to me until much later. One thing I never sought to do though, was imitate Lynch. Because you can’t. Many have tried and failed. So while Dead@17 was definitely influenced by Twin Peaks, initially at least, I would not say it’s like Twin Peaks. It definitely has its own flavor and identity.

25YL: How did you feel about The Return?

JH: I’ve never had a viewing experience quite like it. The week to week anticipation was incredible. It’s so rare to go into something so blind and have no idea where it’s going. I had hopes for certain things I wanted to see, but at the same time was very careful not to set any expectations. I remember being hopeful for at least a mention of Major Briggs and Philip Jeffries – but to discover that they were essentially driving the plot of the show was amazing!

After Part 18, I did feel immensely let down. Almost depressed. I expected a left turn ending, but not for so many things to be left open ended. But the more it sat with me, the more I grew to love and appreciate it. The thing is, The Return actually answered a ton of questions and connected a lot of dots from the original series and Fire Walk with Me. It just presented a ton of new ones. Unanswered questions and cliffhangers are part of the Twin Peaks DNA. We are essentially left as we were at the end of Season 2 – just with a whole new set of questions. Despite any complaints or issues the Twin Peaks community had with The Return – we’re still debating and discussing it. That’s a gift that ensures its legacy.

Having said all that – I’m really, really hoping there will be more at some point. I want a happy ending for Cooper, Laura, and Audrey.

25YL: You produced a comic-style page for each episode of The Return. What prompted that, and how did you find the process?

JH: Despite being a comic book artist, that was not the plan going in. Because Twin Peaks coming back was so monumental and important to me, I knew I wanted to do something special to commemorate it. I thought I would try to maybe turn out a quick sketch or portrait after each new episode. But after the premiere, as I’m sketching out the Giant talking to Cooper, I realized very quickly that I couldn’t divorce the words from the images. That’s when the idea of drawing scenes, not single images, came to me. It seemed so obvious, I can’t believe I didn’t think of it from the start.

25YL: I particularly loved the one for Part 12 with Sarah. What was your thinking behind the design of that page?

JH: Thanks! I really wanted to show the turmoil within her. It appears she’s either battling herself, or someone or something else within her. I thought splitting her face between two panels really helped illustrated that duality. 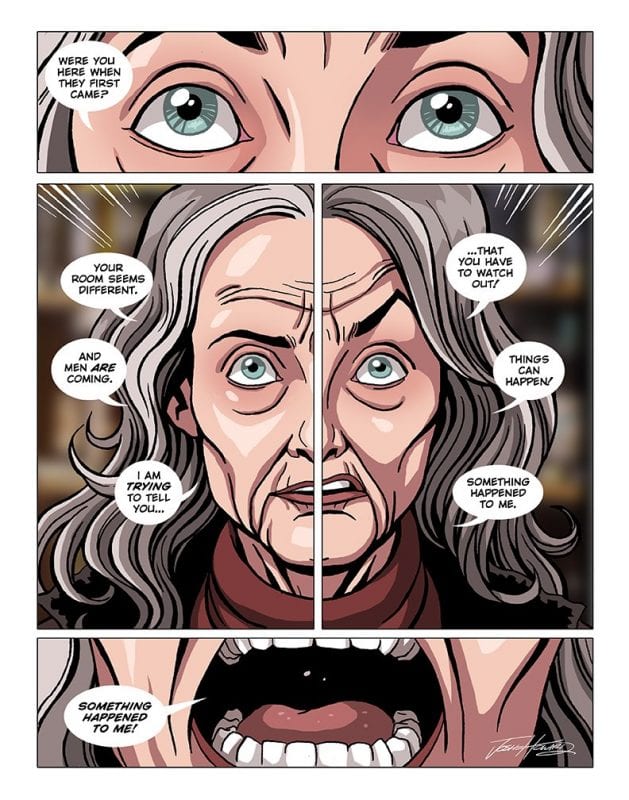 25YL: What’s your usual process for producing a comic?

JH: It always starts with a script and having a clear direction of what kind of story I want to tell. Once I have that down, I do quick thumbnail layouts of how the dialogue and action will play out across individual panels. Then I loosely pencil them at full size, then do tighter pencils over that, then ink over that. Then I scan the art and do all the coloring, editing, and lettering in Photoshop.

25YL: Do you find any problems working in a team or in partnership when producing a comic?

JH: 99% of the comic work I’ve done has been entirely a solo effort. I like telling my own stories my way, and that’s the kind of work I’m drawn to as well – things with distinctive individual voices. Having said that, If Lynch and/or Frost every want to make a Twin Peaks comic, I’m entirely at their disposal!

25YL: How has your style and process evolved over the years?

JH: Early on, I was probably dabbling in a much more cartoony style over a more traditional comic book style. At this point I think I’ve settled into a happy middle, which I hope lends to a more distinctive style of my own.

25YL: Have you tried to keep your style the same over the course of Dead@17 or let it evolve?

JH: I’ve always been keen to learn and grow in my technique and let my style go where it felt natural – so there are some definite differences between the individual series, especially since it was produced over a 12 or 13 year period. When you thumb through the book as a whole (all 7 volumes as compiled in The Complete Collection) the progression (or maybe regression in some cases) is very evident.

25YL: Tell us about the potential movie adaptation. Anything happening?

JH: It’s been an up & down rollercoaster for years. A lot of interesting people have been attached and taken stabs at it with varying levels of success. However, the stars could never really seem to align. I could fill a novel or two with Dead@17‘s Hollywood travails. However, two years ago the people I’m now partnered with put their money where their mouth is and produced a 10 minute, proof-of-concept short film that I am very proud of. It has opened some doors and I’m just waiting to see where those lead. 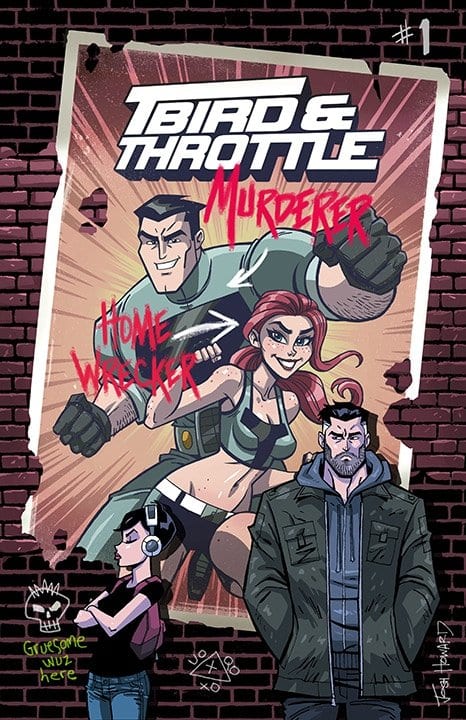 JH: I’ve been working on and am about to release the first book in a brand new series called T-Bird & Throttle. It’s my first attempt at the superhero genre – my take on it anyway. It’s based on an idea I conceived of nearly 20 years ago that I’ve slowly built on and added to over time. It’s a very big story with a lot of moving parts, but at its heart is a story of redemption.

25YL: That was a Kickstarter project right? What was that experience like?

JH: Yes, it was my first Kickstarter, and thankfully a successful one. I had heard all the horror stories, but it was actually a very smooth experience for me.

Beyond that, I’m working a short Twin Peaks “fan comic”. I decided to take all the momentum and positive reaction I got from the Season 3 pieces I did and see if I could take it a step further. It’ll be short – only about 10-12 pages. It’s kind of a test. If people like it, maybe I’ll do more. Of course this is all unofficial with no ties to Lynch, Frost, or Showtime. But I think it’s a fun “what if.” I hope to debut it at Twin Peaks Fest in July.

25YL: We can’t wait for that. Maybe you can follow in the footsteps of Joss Whedon and do follow-up seasons in comic form! Thanks for talking to us and good luck with your new book!

Learn more about Josh and his work on his website, buy prints, and follow him on Twitter and Instagram. All artwork shown here is by permission of Josh Howard and should not be reproduced without express permission.

More From: We Are The Art Life