The following is a guest post from Duncan Sneddon.

There’s no particular thesis or theory for this article, just a series of more-or-less connected musings and observations prompted by a throwaway line in “Cooper’s Dreams” (Season One, Episode 5, or Episode 6, depending on whether the Pilot is being counted). I should say at the outset that these thoughts don’t connect to larger theories trying to work out the mechanics and details of tulpas, time travel and alternate universes, which is something I consider to be largely futile and in any case less interesting than exploring the thematic and intertextual constructions of Twin Peaks.

The line is delivered by Ben Horne, at the party put on at the Great Northern to welcome the Icelanders whom Ben hopes to convince to get on board with with investment for his Dastardly Nefarious Schemes. After arranging to meet Catherine in his office (in order to discuss Dastardly Nefarious Schemes), Ben closes the scene by asking an offscreen Icelander: “Ah, Thor—I’ve been meaning to ask you: are you familiar with the work of Knut Hamsun?” As that’s the end of the scene and the matter is never raised again, we never get any resolution (ha!) on the matter of Thor’s literary tastes, but it’s an interesting starting point for thinking about Ben.

First though, a word on Hamsum. Knut Hamsun (1859 – 1952) was a Norwegian novelist, poet, essayist and short story writer. One of the finest European writers of the late nineteenth and early twentieth centuries, his bold writing (which points forward to Kafka and Joyce in some respects) earned him the Nobel Prize for Literature in 1920, and his novels, perhaps especially those known in English translation as Hunger, Mysteries, Pan and Growth of the Soil are still held in high regard.  His reputation as a writer is, justly, high.

He is, however, a deeply controversial figure, as his embrace of the most abhorrent ideology of the twentieth century—fascism—has rightly sullied his reputation. A supporter of the German occupation of Norway during the Second World War, he gave his Nobel Prize medal to Joseph Goebbels as a gift, and upon Hitler’s suicide wrote a glowing obituary for him, praising him as a “warrior for humanity”. The issue of trying to seperate an artist from their art is a complex one, and one that a post #MeToo culture has struggled to deal with. Any such separation is difficult with Hamsun, as racism, misogyny, and other reactionary sentiments are very present in many of his works.  It’s something that confronts any reader of Hamsun’s work, and something to which they have to formulate their own responses.

A complex figure, and a challenging writer, Hamsun seems—to put it midly—a little out of the comfort zone of Season 1 Ben Horne. While it is true that in Twin Peaks no owls, high school beauties, or doddering old room service waiters are quite what they seem, Ben Horne doesn’t strike the viewer as a literary type. Even in his carrot-chomping, holy-book scanning, pine weasel-saving incarnation from Season 2, it’s hard to imagine Ben tucked up in bed nodding thoughtfully as he ponders the internal monologues in Hunger, or the unpredictable behaviour of Nagel in Mysteries. While he’s an adept schemer, and certainly a clever man, there’s little hint of any real intellectual substance to Ben Horne. And certainly as we find him in Season 1, Ben is so busy with partying, having an affair, running underage sex workers across the border and general Dastardly Nefarious Scheming that it’s a wonder he has any time to run his hotel, never mind familiarise himself with European modernist literature.

Hamsun’s work doesn’t seem like the kind of thing he’d have learnt about at school, and neither is he likely to have spent much time at the town library (much less the Bookhouse!) learning about Hamsun from listening to other people there who were more avid readers than he.

More likely, Ben gleaned whatever knowledge of Hamsun he may have from talking with the Norwegian businessmen from the Pilot episode, and filed it away to bring out any time he wanted to sound sophisticated. Since we know he’s about to head to meet Catherine in to engage in some more Dastardly Nefarious Scheming, it seems unlikely that he has asked Thor this question because he genuinely wants to engage him in a conversation about literature. Ben’s not really interested in finding out if Thor has read Hamsum, and if so what he thinks of his works—he’s asking so that Thor (any others listening) will think that he has read Hamsun. This is Ben putting up a front; Ben the poser presenting himself as a cultured intellectual to his guests. He’d hardly be the only character in Twin Peaks to present a false image of himself to others. 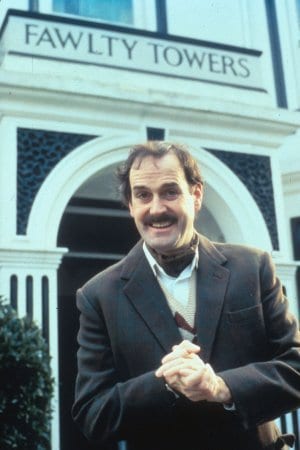 In the passing, we might also compare Ben here to TV’s other great small town hotelier, Basil Fawlty from the 1970s British comedy Fawlty Towers. Basil is fundamentally an especially hilarious and especially pathetic embodiement of British neuroses about class and the rigid policing of class boundaries that defines so much of British popular culture and political discourse. He’s funny not just because of his manic outbursts and relentlessly inventive rudeness, but because of his deeply desperate desire to attain that most holy of British virtues: Middle-Class Resepectability. His efforts in this direction (putting on a gourmet night and being sure to invite “one of Torquay’s leading Rotarians”, his loud denunciations of striking workers when he knows one his guests reads the Conservative Telegraph, his crawling obsequiousness in the presence of upper and upper-middle class guests) are in a sense not all that different to Ben namedropping an author he’s probably never read—it’s all about putting up a front of sophistication and culture. Though it must be admitted that the comparison between the two shouldn’t be pushed too far: to my knowledge there are no episodes of Fawlty Towers in which Basil and Manuel get up to kooky hijinks while smuggling cocaine and underage sex workers over the Welsh border.

If the difference between the surface-level presentation of an individual, or indeed of a town, is a major theme in Twin Peaks and other David Lynch works (Blue Velvet being the most obvious example), so too is doubling. From the titular mountains to Catherine’s two sets of ledgers (more Dastardly Nefarious Scheming), from the name of the Double R Diner to Deer Meadow as the evil twin-town of Twin Peaks, from identical cousins to otherworldly doppelgängers, Twin Peaks is a show swimming in doubles like a fish in a percolator. In a sense, Ben’s question to Thor hints towards that theme: he considers the Icelanders to be effectively interchangeable with the Norwegians. This second group of Nordic businessmen are basically direct substitutes for the first, brought in to invest in the same Dastardly Nefarious Scheme he wanted the Norwegians for earlier. He tells the Icelanders the joke about what happens when cross a Norwegian with a Swede (you get a socialist who wants to be king), he assumes they share the same literary reference points—as far as Ben is concerned, they’re pretty much one and the same.

Very flippantly, the identification of the Icelanders with the Norwegians can also been seen in the person of Ben’s brother Jerry. Jerry explicitly idenfities with the Icelanders at the party itself, when he opens proceedings very gamely by announcing in shaky Icelandic that “We are all Icelanders!” So far, so simple; but how are we to identify Jerry with the Norwegians, who leave the show before Jerry arrives? My answer, as is my answer to all difficult questions, is cheese.

Before the Norwegians are seen on screen in the Pilot episode, and before their nationality is explicity mentioned, Ben refers to them when speaking to Leland, calling them “those cheese eaters” (leading a Wisconsinite friend of mine to assume her own people were in for a ribbing the first time she saw it). We don’t actually see the Norwegians eating any cheese, but Audrey’s disparaging reference to “that ridiculous smörgåsbord” may indicate the recent consumption of cheese.

But who do we see eating cheese? Why, none other than Jerry Horne! Bon vivant that he is, the younger Horne brother knows how to appreciate a good cheese, as we see in his first appearance, when he arrives at dinner brandishing and enthusing infectiously about his brie baguettes. Much later, while discussing with Ben which of the two ledgers to burn (Theme of Doubling! Dastardly Nefarious Schemes! Theme of Fire!), he insists that whatever does end up getting burnt, his smoked cheese pig must not be. 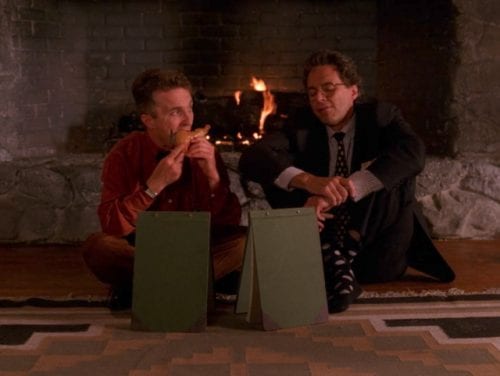 So, we can identify this cheese eater with those cheese eaters, he identifies himself with the Icelanders, so therefore (using my flawless logic) the show identifies the Icelanders and the Norwegians as doubles of each other, so therefore Ben can assume they share a literary culture and he can namedrop the great novelist and repugnant fascist Knut Hamsun in a conversation with an Icelander. All because of cheese.

I’ll leave it to our Icelandic and Norwegian friends to settle between themselves which of them are from the White Lodge and which are from the Black Lodge.

Duncan Sneddon teaches Gaelic at the University of Aberdeen, Scotland.  He is on Twitter @Cruithneach 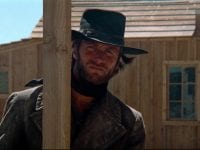