What do you get the Twin Peaks fan that has everything this Christmas? Well, we have made the perfect list of wonderful and strange items that you will only find where the birds sing a pretty song and there’s always music in the air. So make sure the Audrey Horne in your life gets what she wants, or give yourself a present. You deserve it!

Nothing says cherished memories like the diary of a dead girl. This Laura journal comes in red and black faux leather with gold foil detail, and mirrors the one featured in Fire Walk With Me. It even contains a dirt-smudged ‘this is the diary of Laura Palmer’ first page. Measuring 8-inches tall by 5-inches wide, there’s just enough space to record your nightmares, dalliances and midnight motorcycle trysts. Chug-a-lug, Donna.

Only $16.99 from Entertainment Earth

Join Lucy in the ethereal space between two worlds with your very own large owl pendant, identical to hers in Season 3 and for less than $10! The necklace holds a vintage look pocket watch, so you can keep track of the comings and goings of Lodge beings without even getting up from your swivel chair.

There is also a pendant version that doesn’t open into a watch, but that has blue eyes and is less authentic. Make sure you get the watch one. Very important. Very important!

It doesn’t sound like it would be the most difficult task, but finding a Saturn lamp like the one next to Coop’s Lodge chair is no mean feat. The original was a feature of the 1939 World’s Fair and is now a rare collectible, partly because it also appeared in Bladerunner a few years before Twin Peaks, so those damn Replicant fans snapped them all up first.

It’s not the prettiest lamp in the world, but is a symbol of the stars aligning and a time presenting itself, so a lovely piece to have. Someone is missing a trick not mass producing a ton of them for Peaks fans. This one is going on Etsy for $400. 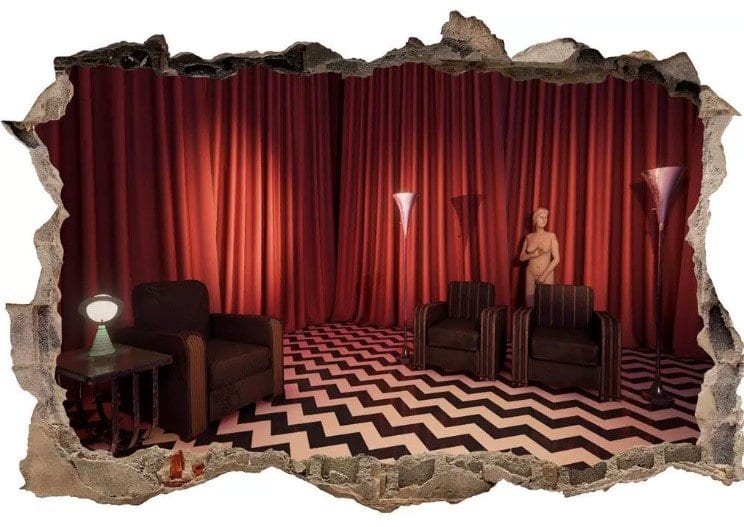 THIS WOULD LOOK NICE ON MY WALL!!

Someone, somewhere, thought it would be fun to make this huge Red Room wall decal that looks like someone has Hulk-smashed right through your bedroom wall into another dimension.  It comes in varying sizes, so you can just have a little peep inside, or get a giant one and pretend to climb into it daily, like Alice through the looking glass.

I’m thinking it would be an amazing way to spark the imagination and get my mind in the Twin Peaks writing zone. Or it would plunge me daily into an existential crisis of mammoth proportions. Either way, I’ll take my chances in order to look long into the Black Lodge abyss. 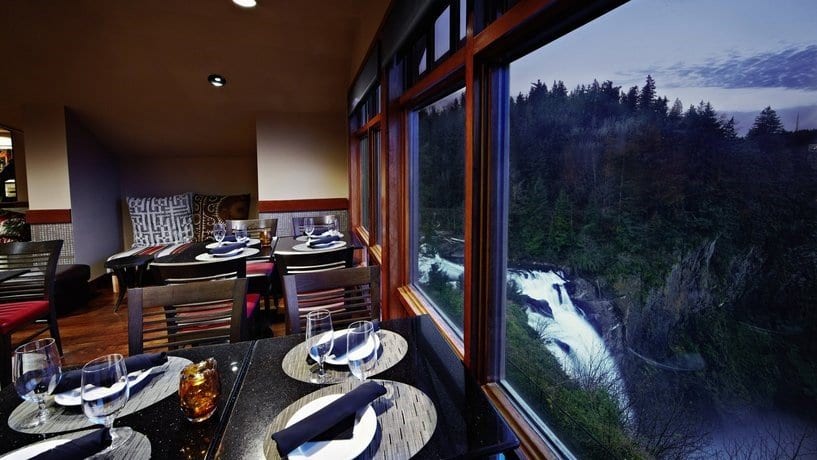 The Salish Lodge has been selling off bits of bedroom furniture to get ready for its upcoming refurbishment and extension work. Namely headboards and bedside cabinets.

Josie, is that you?

They have been clearing them out for the knock-down price of $20 for anyone near enough to collect. I’d sell my soul for wood from the Great Northern, but perhaps wrestling a king size headboard onto the plane is not the way forward.

Failing that, a spa break in a deluxe river view room would be an acceptable alternative. I just want to touch the Great Northern basically, in any incarnation. Make it happen, Santa!

For more memorabilia tips and rare collectibles visit the Twin Peaks Convenience Store on Facebook. If you’re looking for some official Twin Peaks merchandise, head on over to the Showtime Store