In the previous Archivist’s File, I shared and analyzed some newspaper articles from the Snoqualmie Valley that reported on the 1989 local filming of the Twin Peaks pilot episode. This week’s instalment moves forward to April and May 1990 with glimpses into the local news of the day that situates and responds to the initial airing of Twin Peaks’s first season.

The most exciting and sustained news story to run in close proximity to the April 8, 1990 original Pilot premiere appears in the April 19 issue of The Valley Record. Penned by Paul Weideman and titled “The Pies Behind ‘Twin Peaks’,” the story opens with a note of concern and frustration on how the Snoqualmie Valley area is being represented in the national media before pivoting into a brief profile of the two women responsible for the pies at the Mar-T Cafe that the tv series made famous from the first episode and continues to do so today.

To start the article, Weideman writes, “It looked like the controversial land-use decisions behind Snoqualmie Ridge, and the planned PGA Tour golf course, were going to put the town of Snoqualmie ‘on the map’ around the country. Then came ‘Twin Peaks’ and a story in a grocery store tabloid, beating Weyerhaeuser to the punch.” From the lede it’s clear that the series Twin Peaks bears an uncanny resemblance to the valley area that plays it visually on screen. Just as Ben and Jerry Horne, Catherine Martell, and Josie Packard all strategized to profit from transforming timberlands into high-end real estate development in the series, so, too, was the local community debating a proposed future of real estate development and speculation that would most likely have radical implications for the area.

As to the grocery store tabloid, Weideman is referring here to an article in The Star that painted the Snoqualmie Valley to be the frequent scene of drunken knife as well as chainsaw fights among other dark secrets. Furthermore, according to this article, The Star quoted a local man who described the valley as devoid of sex workers after the mill closed down and that “the forests are teeming with Satanic cults, the trees draped with their macabre leftovers.” It shouldn’t be difficult to imagine how frustrating such portrayals would be, and for fans of the series then and now it’s crucial to distinguish Lynch and Frost’s entrancing fiction from the non-fiction community of individuals impacted in complex ways by the Twin Peaks phenomenon.

Weideman perceives that complexity as his story then pivots to several more flattering press items percolating up with the immediate success of the series.

One of the most consistent positive notes across that positive press was the Mar-T, especially its pies: “The filming in the Mar-T took several days, including one from 6 a.m. to midnight to get the scenes just right. Pat [Cokewell], who will celebrate 14 years as owner of the restaurant on April 29, was pleased at how good the movie shots of the restaurant’s exterior looked. But she was most happy about director David Lynch’s rapture over the pies made by Garnet Cross, a 9-year employee…The special favorite was Cross’ chocolate-peanut butter pie.”

Especially thrilling is the photo of Garnet Cross whipping up a pie alongside Pat Cokewell. While Cokewell has done interviews and appeared in news and fan publications over the years, it’s rarer to see the person who made those inspiring pies, so it’s a pleasure to share it here. 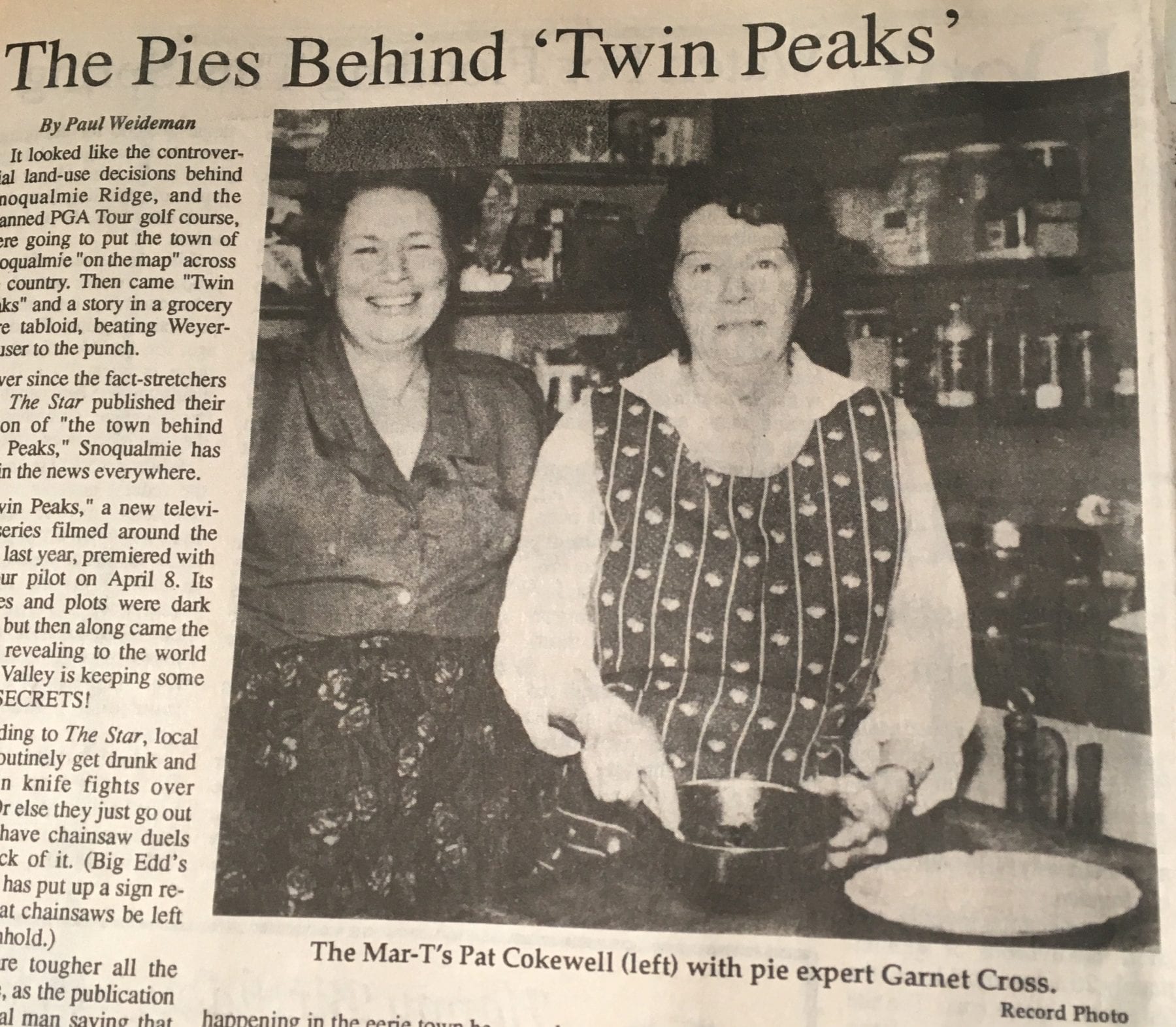 The article closes with Cokewell telling the reporter that since a replica of the Mar-T was built in Hollywood, she suspects the cast, crew, and creators will not need to come back for future filming.

And, because good detective work involves observing the full scene and not just the obvious clues, it’s worth noting that the same April 19 issue of The Valley Record contained a front page story about the local Board approving the “Ridge” Annexation, a story about opposition to the Grouse Ridge Prison proposal—an item that seems downright proleptic in light of the Ghostwood Prison project in Mark Frost’s Twin Peaks: The Final Dossier, a Crime Stoppers reward offer for leads to the arrest of an arsonist, a full-page ad by Weyerhaeuser promoting Earth Day, and a roundup of the Kids’ Trout Derby.

While this list can make a Twin Peaks fan not residing in the area perceive all sorts of connections between the reel and real Twin Peaks, it should also reinforce the fact that fires, controversial real estate development, and corporate-environmental dynamics are serious challenges to communities and their individuals. That said, I’ve always found the series to be a powerful provocation to think and act carefully about the issues Twin Peaks raises within the lab space of its fiction.

In close temporal proximity to this issue, there are just two more pieces related to Twin Peaks. One is a short and straight to the point letter to the editor from a North Bend resident in the April 16 issue of The Valley Record: “Oh, my! And here we thought ‘Twin Peaks’ was going to be our darlin’ Dolly Parton’s life story! That would have been much more interesting than what it turned out to be: bad dialogue, worse acting and predictable nonsense. We were terribly disappointed that a man affiliated with the blue-ribbon production, ‘Hill Street Blues,’ could come up with this trash!…Thank goodness for television channel changers.” Okay, so not everyone’s a fan.

To bring this 1990 file to completion, in the May 10 issue the Mar-T ran an ad for episode viewing parties with dinner and the proverbial coffee and pie. I like to imagine what those dinners might have been like, perhaps creating some sort of temporary coexistence of locals and fans from near and far already making sojourns to the filming sites. Reminiscences of being an extra and/or of being frustrated by having a driveway blocked by a film crew for hours commingling with nascent theories on who killed Laura Palmer and a universal savoring of copious amounts of coffee and pie! 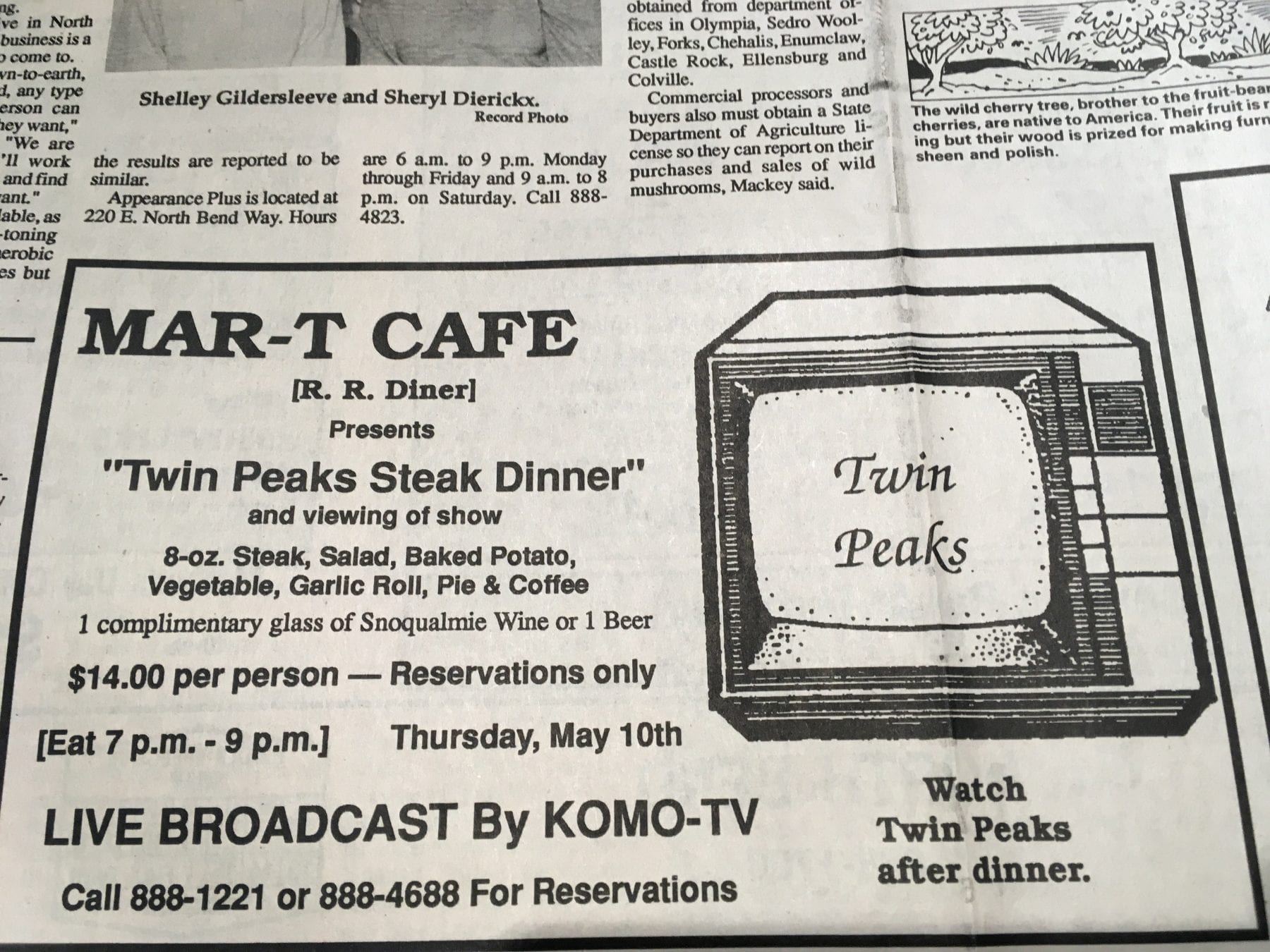