This last weekend, I and nine other students of acting, directing, and screenwriting gathered at Pepperdine University to workshop with Sheryl Lee and Gary Hershberger. Autograph hounds beware! This is not for you. This is a workshop, the key word being WORK. I’m a screenwriter. I’ve written a few screenplays on spec (read: no money), and am applying for the David Lynch MFA program at Mahrishi University of Management. The other folks in the workshop were aspiring, interested, and working actors of vastly differing backgrounds and experience, as well as folks who wanted coaching in directing films.

Unsure what to expect, and unfamiliar with quite a few faces, we gathered in the waiting room (no red curtains or chevron floors, but plenty of coffee and donuts) and introduced ourselves, small-talking through our nerves. At 10a.m. sharp, Courtenay Stallings, professor and adviser in the communications department at Pepperdine (and an amazing woman and friend) called us in. They were ready for us.

The campus television studio’s equipment pushed and stowed along the walls, twelve chairs set in a circle welcomed us. Sheryl and Gary were already seated. Each of them made eye contact and smiled at each of us. Sure it was a trip to be greeted by Sheryl Lee’s iconic face (and it’s startling in person how beautiful she really is!) and Gary’s open, friendly smile. As soon as they started talking though, any sense of intimidation dissipated. They treated each of us as equals and friends, gently guiding us toward maximizing our abilities. No patronizing, no condescension, no posturing. Only care and knowledge to impart.

What came next redefined, for me at least, the potential of a classroom experience. I’m not going to describe the exercises. If you’re familiar with Twin Peaks, you know “full of secrets” is kind of a default setting. What I will tell you, though, is that Gary and Sheryl are brilliant.

Their empathy, intelligence, and personal involvement in the learning and growth of every single student created a soft landing for a group of people notoriously hard on themselves. There were no bad scenes, no bad actors, no bad directors; only people who didn’t know what they needed to know yet. In each student, they saw a person worthy of teaching, and let me tell you: they TAUGHT. Not just through lectures, but Aristotelian/Socratic questioning until the student not only felt the heart of the scene, but was able to demonstrate it and give a performance.

After Gary or Sheryl got their hands on you as an actor, you were likely to hear delighted and amazed gasps as your fellow students took note of your growth. Gary and Sheryl were right there laughing and crying along with the rest of us. They were completely present, and they made it easy for all of us to be present in each moment, supporting each other, doubting ourselves less, until we got it right.

I’m writing a really intense biography of a living person right now. There’s a movie deal that’s happening, and it will be produced. No pressure, right? The second day, I brought in a two-page scene. It’s an emotionally devastating scene about grief in a cocoon and an unlikely catalyst starting its metamorphosis to hope. It was a two-woman scene, and I tried to direct it. Hard to do because I haven’t directed anything in at least 20 years, and I’m way too close to the material. The two women gave me everything they had. They believed in the material, and even with inept coaching moved many to tears.

Gary and Sheryl stepped in. Sheryl helped create a more defined physical set for the actors so they could just focus on what they were feeling. Gary gave them permission to not focus on every word. Sheryl dug in and asked me a question about motivation. “What’s going on in this character’s head?”

“She’s just desperate for anything to help.”

Sheryl repeated that to the actors, “She’s just desperate for anything to help,” and then they started the scene again. That time, those two actresses took my breath away. The Physician’s Assistant/actor sitting next to me leaned over and whispered, “Even I felt that one.” We had to take a break as a group, because emotionally and energetically, we all needed to shake it off a little. I’m not much of a crier, ever, but I had to step outside and let it out a little. I felt the actresses’ pain, as well as the pain of the scene. I was touched beyond words that these strangers, now friends, would give of themselves in service to something I’d written.

It wasn’t all intensity and shaking things off. There was just as much laughter, most of it belly-deep. There was music, there was dancing, there was lip syncing. There were moments of pure joy, real communication, and discovery. Light bulbs went off above heads. I watched every step of the way as Gary and Sheryl coached my dear friend from “interested in maybe acting” to “Hey! I can do this and do it well!” I watched as Sheryl passionately validated another classmate who was feeling hopelessly invisible as a woman over 30 trying to make it as an actress. Friends were made, bonds were forged. By 6p.m. on day 2, when Sheryl had us stand in a circle around her, and she thanked us each for our contributions, there weren’t too many dry eyes.

Emotionally drained as I was, I went home that night and banged out the rest of my draft. I can tell you without hesitation that it’s exponentially better than anything I could have written before this workshop. I’ve learned that I can trust actors and directors. I don’t have to hold their hands through everything I write, as they’ll be living it in their bones. They know what to do.

I’ve been a college teacher and I’ve been a student-three college degrees’-worth of student-ing. In all that time, I have never met a teacher (myself included, except in rare cases) so completely involved in their students’ emotional well-being, personal enrichment, and practical and personal growth. Gary’s charisma and encouragement, Sheryl’s passion and empathy, and their collective intelligence and comprehension of the materials AND of student needs and desires left no room for failure, or for feeling anything but total immersion and investment in the material and the other students’ success. I learned more in these two days than in an embarrassing number of years in college (Except about marine invertebrates. I learned more about THOSE in college. I’m definitely okay with that! lol). They create an atmosphere of total acceptance, diligence to the work, and adherence to a baseline of mutual respect between every single person in the room. I’ve never seen anything like it, but I’d sure like to see it again sometime! If you get the chance, take this class. TheActorsDirectorWorkshop.com

I’m still processing all that happened and all the lessons revealed to me, and believe me, there were many. The overwhelming feelings I have are feelings of joy, discovery, and gratitude. Because of this workshop, I know to honor those feelings, regardless of where they lead me. I hope it will be a place both wonderful and strange.

A Pacific Northwest forest native and denizen, Jill appreciates the fact that others are occasionally willing to read something she's written. Dogs, radio production, and hiking occupy most of her time. 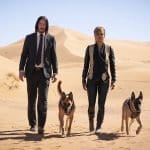