Twin Peaks when it first appeared on TV, was (and still is) considered one of the strangest, most terrifying and surprising works to ever grace network television. It is known for many iconic moments, and out-there choices, as well as it’s enduring plot and characters. David Lynch’s avant-garde style stands out among the legions of television shows in our history for many reasons. Indeed, Twin Peaks would not be complete without some of the strangest elements included. Some such characteristics have their roots, not in Lynchian television, but old Folktales and superstitions. Some were brought over to America, others already here and all altered by cultural mesh and the simple passage of time. Lynch and Frost capitalized on every nightmare-inducing element, from the ominous presence of the owls, to the terrifying and unforgettable Doppelgängers that haunted our dreams – sleeping and waking alike. Though this is not an exhaustive list, I’ve tried to hit on some of the most prominently appearing superstitious featured in the series.

For More Reading about Superstitions and Folklore, check out the other three articles in the series: Part 2 Part 3 Part 4

Slightly pale, with milky white/blue eyes that lack pupils, often sporting terrifying grins, laughing and screaming like maniacs and either standing stock still like sinister sentinels or creeping about low in a disturbing fashion, the Doppelgängers of Twin Peaks have made fans shrink in terror from their television screens for the better part of 27 years. Whether you call them “Shadow Selves” as suggested by Hawk, or if you believe that they are the so-called “Dwellers on the Threshold”, we at least know for certain that these creatures are Doppelgängers. But of what sort?

Several Doppelgängers (stylized Doppelganger, omitting the umlaut in the subtitles of the red room) appear in Twin Peaks: Laura Palmer, Leland Palmer, The Little Man From Another Place, Caroline Earle and even Dale Cooper. They are characterized as little more than identical copies and share no characteristics with the person beyond the physical. What their purpose is, we can only guess at, though I think that it can be fairly said that they are malicious in nature. This part of the TWIN PEAKS mythos is largely steeped in mystery.

The word Doppelgänger first appears in Germany in 1830 and is literally translated as double-goer. It also shares similarities with the Dutch, Dubbelgänger, which shows up around the same time in history, though essentially independently of the German, and carries an identical literal meaning. A literal Doppelgänger! According to the Oxford English dictionary, the definition of a doppelganger is “an apparition of a living person; a double, a wraith.”

Though the words used to describe them are dissimilar, the concept of the Doppelgänger appears in folklore all over the world. Most prominently, this can be seen in the Norse myth of the vardøger or the Scots/Celtic trow, or chængeling. While the Norse vardøger, defined as “a ghostly double who precedes a living person and is seen performing their actions in advance,” is almost identical in base concept to a Doppelgänger, the trow, or chængeling has a slightly different mythology, which is focused more heavily on the idea of a person being replaced entirely by a creature that is non human, generally for nefarious purposes. These stories sometimes get mixed together with other fairy lore, which differs greatly from the basic idea of a Doppelgänger, which is usually human in appearance at all times, while a chængeling is more of a shapeshifter.

At it’s inception, the “Doppelgänger” was simply a person’s lookalike. In the German tradition, a Doppelgänger is a wraith or apparition of some type which casts no shadow and is generally evil in nature. In some cases the Doppelgänger may even try to replace the person in question. It is also considered an omen of death. Obviously, this concept includes different elements from different cultures, with the added idea previously only seen in chængeling lore of total replacement of the person.

Misleading and malicious, Doppelgängers are long thought to plant strange ideas in the minds of their lookalikes, acting as something of an ‘evil twin’.  Literature, as always, contributed enormously to the additional meaning. This concept inspired some authors such authors Elizabeth Barrett Browning ( in her poem The Romaunt of Margaret) and Edgar Allan Poe ( in his poem, Silence as seen below). The word eventually developed to impart multiple ideas including the concept of a twin soul, someone in the world who looks similar to another, or, in a more sinister concept, the alter ego of a person who “is physically or behaviorally similar to another person”.

There are some qualities—some incorporate things,
That have a double life, which thus is made
A type of that twin entity which springs
From matter and light, evinced in solid and shade.
There is a two-fold Silence—sea and shore—
Body and soul. One dwells in lonely places,
Newly with grass o’ergrown; some solemn graces,
Some human memories and tearful lore,
Render him terrorless: his name’s “No More.”
He is the corporate Silence: dread him not!
No power hath he of evil in himself;
But should some urgent fate (untimely lot!)
Bring thee to meet his shadow (nameless elf,
That haunteth the lone regions where hath trod
No foot of man,) commend thyself to God!

Evolved to this point, the Doppelgängers of Twin Peaks are now a recognizable entity. Though Lynch took his concept further in visual terms, the basic concepts are there – we know that they are malicious, aligned with the Black Lodge; Hawk calls them Shadow Selves, and Poe refers to the entity also as being ‘a shadow’, most likely in existential terms. It is possible that Cooper was replaced by his Doppelgänger in the Season 2 Finale (though it can also be argued that Cooper is simply inhabited by BOB). Though it is extremely hard to tell because of the lighting, it is also possible that Doppel! Coop doesn’t throw a shadow.

Whatever the Doppelgängers of Twin Peaks are, they certainly retain the same terrifying tone of the original folktale. I’m terrified just thinking about it.

THE OWLS ARE NOT WHAT THEY SEEM 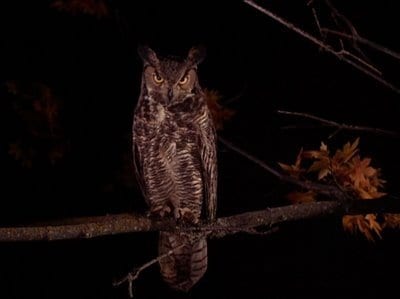 Another concept that Lynch and Frost play with heavily is the Owl motif. In the book A Treasury of American Superstitions by Claudia de Lys, it states that the Owl, especially in Native American customs, is a Bird of Doom. While they also carry the connotation of wisdom, as bestowed upon them by the Greeks, it’s obvious which path the creators of Twin Peaks chose. An Owl’s hoot, in some cultures, especially if experienced during the day, is an omen of plague, sickness, defeat, or even death. This is connected slightly to the connotation of wisdom, as Owls are considered to be, as de Lys puts it ‘presage’.

She also suggests that in some Native American cultures (though she fails to specify which) the Owl is not actually a bird, but the manifestation of a dead spirit, which takes the form of an owl specifically to provide warning of imminent death, and that that communication between the dead soul and the living was via the owl’s hoot.

Because of the early mistrust of anything that happened at nighttime, the Owl also gained a reputation for ill because of its midnight habits, which were deemed unseemly by many as early as the 1600s. Owl eyes, sensitive to the ultra-violet spectrum, much like a cat, are commonly known to glow in the dark, which certainly didn’t help it any in those same communities across the world. Interestingly enough, in early, rural America, an Owl hoot during the day was considered to be a sign of fire.

The Owls of Twin Peaks are certainly ominous; considered to be lookouts for BOB—his eyes and ears in the forest, as well as his wings, so it might seem. The history of superstition that surrounds them, as well as the general commonality of these superstitions across the spectrum, only heightens the audience reaction to them, especially, as Lynch seems to have been so fond of doing, when we can only hear them, in his shots of Ghostwood Forest, and not see them.

Two other, smaller superstitions of note made their way into Twin Peaks.

A KIDDLEY DIVEY TOO, WOULDN’T YOU?

In Season 2, Episode 1, Leland Palmer appears with his hair turned stark white…overnight. His last act was, in the preceding episode, to smother Jacques Renault with a pillow in his hospital bed. So the next time we see him on screen, Leland’s hair has altered colour.

In Prisoner of Chillon, Lord Byron wrote the following lines:

“My hair is gray, but not with years,

Nor grew it white

In a single night,

As men’s have grown with sudden fears.”

Now the actual cause of Leland’s new-do is pretty ambiguous. Is it fear? Stress? Something else that’s malignantly BOB related? A complete and utter psychological breakdown (probably given the previous day’s activities and BOB permanently on the brain.) Who knows. But the superstition has been around a day and an age, and I don’t know about others, but it certainly surprised me when he came around the corner, as gay and energetic as any Broadway star, belting out “Mairzy Doats” much to the surprise of his wife and niece.

THEN, WE WERE IN THE WOODS. IT WAS VERY DARK. I WOKE UP AND THE WINDOW WAS OPEN, THERE WAS A COLD WIND BLOWING THROUGH THE ROOM.

Occasionally, the concept is thrown around the TWIN PEAKS fandom that the wind is associated with BOB, heralding him, or even ‘bringing’ him from place to place. Maddy, in her dream in the first episode of Season Two, describes something with evil, grey eyes, watching her by her bedside, and when she wakes up, the window is open, and the wind blowing through. Often in Twin Peaks: Fire Walk with Me, Laura wakes up to an open window, where, supposedly, BOB gets in. The wind is always blowing, even at the stoplight at Sparkwood & 21.

Back in the day, and still, to some elders yet living, the night air is considered to be ‘evil’. The idea is that disease, and thus death, could be carried on the wind in the form of infectious particles. While the truth, as we are now aware of it, is that the ‘infectious particles’ were often actually bugs carrying disease (such as mosquitoes) this existential idea feeds into the ominous sound of the wind blowing through Ghostwood amidst the haunting hoots of the Owls watching somewhere from above.

All these terrifying concepts, while most finding root in some scientific explanation, (with, perhaps, the exception of the Doppelgänger) still appeal to the irrational mind of the viewer, who unwisely watches Twin Peaks, alone, at night, in the dark, with the fan going at the top of the stairs. A perfect recipe for nightmares that will haunt your dreams for years to come. Having watched the few, tantalizing teasers for Season Three, I’m positive that there will be many new terrors to mingle with the old.