Part 11 of The Return was absolutely fantastic, if I remember right.  I think I remember Miriam Sullivan climbing through the bushes, which was nice, because I had forgotten that she was still breathing after Richard attacked her in Part 10.  I think I remember Becky spinning her mom’s car around to throw Shelly off the windshield, but Becky forgot about that little mishap for several hours.  That’s okay though, because Shelly forgot that her daughter was in major trouble for shooting up an apartment door as soon as she saw her beau at the window.  I don’t remember seeing the sick girl in the angry woman’s car until she pulled a Linda Blair impersonation.  Did she manifest out of nowhere, or did my eyes totally deceive me?

David Lynch is a master at creating a dream-like reality, and the problem with dreams is that they are hard to remember.  You might remember a feeling or a vibe of a dream, or a specific image or sound, but the more you try to put the pieces together the further you get from what really transpired.  Sometimes it takes an object or event from your day to jog your memory.  You know that something happened… and it’s important… and you might not want to kill that guy if only you could remember why… oh yeah, CHERRY PIE!  But what happens if you don’t remember your dreams, or reality, until it is too late?  And more importantly, what if you cannot trust your own memory?

Bill Hastings has no memory of Ruth Davenport’s death when he is first questioned by the police, but he does remember dreaming about it.  Later the memories come clicking back into place and he is able to direct the police and FBI to the place that he last saw her.  He remembers going through the hole in the fence, he remembers walking 15-20 feet, and then what?  “I don’t remember.”

Something is happening at 2240 Sycamore (ring a bell?) that is warping the minds of those who trespass—or even downright stealing them.  Gordon and Albert see the “homeless man” lurking about, but do they remember that he appeared and disappeared without a trace?  Diane sees a woodsman sneaking up to the police car before Bill’s head implodes, but doesn’t bother to mention it until reminded later in the day.  She looks confused when she says she saw the man leaving the car, but she isn’t sure.  However, the audience sees her witness the man creep towards the car, and not away from it.  Although we still aren’t sure where Diane’s loyalties lay, it is apparent that she is genuinely confused about whether or not she remembers seeing the woodsman.  Their discussion then jogs Gordon’s memory of his vision of “dirty, bearded men in a room.”  (Granted, the woodsmen were only seen for a flash before Gordon was distracted by getting yanked out of a vortex, the discovery of Ruth’s headless body, and Bill Hasting’s sudden death, so it’s not like he didn’t have other things on his mind.)

Something is also happening in Las Vegas that would warrant the purchase of a high-quality tinfoil hat.  When Candie and her wingwomen arrive at the end of the episode Candie is in a complete daze.  She never does answer Rodney Mitchum’s question when she is asked where she has been, but dazes off into space for several moments before responding with a comment about the traffic on the strip.  Does she know where she was?  Does she remember how she got back?  Will we ever know where she was or why she is so dazed?  And Dougie/Coop, our poor, dear Dougie/Coop, has little to no clue where he is or how he will get back.  He does have glimpses of recognition, however, that lead us to believe that he is still in there somewhere.  He hears America the Beautiful as he gazes at the flag at the police station, he is fascinated by badges, and he has the muscle memory of how to disarm a small hitman with a gun.  It’s those little flickers of recognition that cross his face that fuel us with hope for Cooper’s return, but for how much longer can he go without remembering who he is or where he needs to be? 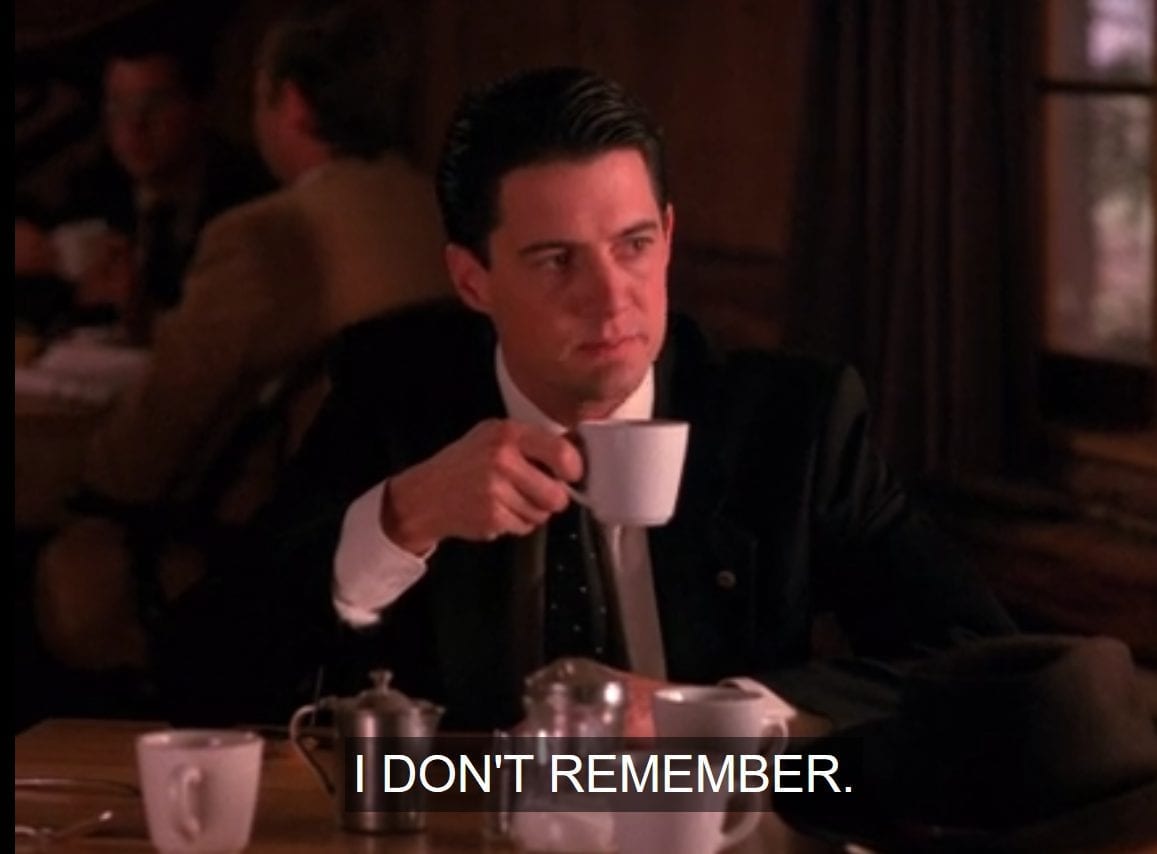 There is some kind of force taking, manipulating, and selectively giving back memories to the characters of Twin Peaks.  In the Land of Lynch memories are not tied to the rules of chronological time, and oftentimes memories of future events come to light in dreams preceding the event.  Laura dreams of Annie telling her that “the good Dale is in the Lodge” long before Cooper is even called to the town of Twin Peaks.  Cooper dreams of Laura’s doppelgänger/cousin Maddy before she is introduced to the series.  He also dreams that Laura tells him who killed her and manages to remember every aspect of the dream EXCEPT for what she whispered in his ear.  Who, or what, is controlling these memories and manipulating dreams?  If the one-armed-man has the ability to lure Dougie into a bakery and buy a cherry pie, and to cause Bradley Mitchum to have a prophetic dream about their meeting in the desert, why does he not have the power to give Coop his memories back?  Are the same forces of evil that are responsible for the deaths and befuddled memories at 2240 Sycamore responsible for Cooper’s loss of self?  What is it going to take for the fog to lift and enlightenment to occur?

I had the answer in a dream last night but now I can’t remember what it was.