This morning on the train, I was indulging my passions for techno music and Twin Peaks simultaneously – reading a blog review of Part 13 while listening to a DJ mix on headphones. In the back of my mind I was thinking about the transition between tracks the DJ was making, seamlessly blending elements from two perfectly synced records to create something greater than the sum of its parts. Simultaneously I was reading Joel Bocko’s beautifully expressed thoughts on timelines and plotting in The Return.

That’s when a thought struck. A new connection was made. As Dale Cooper so rightly observed: “When two separate events occur simultaneously pertaining to the same object of inquiry, we must always pay strict attention.” What if Hudson Mohawk’s appearance behind the decks at the Roadhouse wasn’t as random as it first appeared? What if it holds the key to understanding the time-disturbances in The Return? By way of explaining what we’re about to do, I am first going to tell you a little bit about the country called Tibet. Well actually, not Tibet but DJ mixing. I am first going to tell you a bit about the art of beat-matching and DJ mixing. 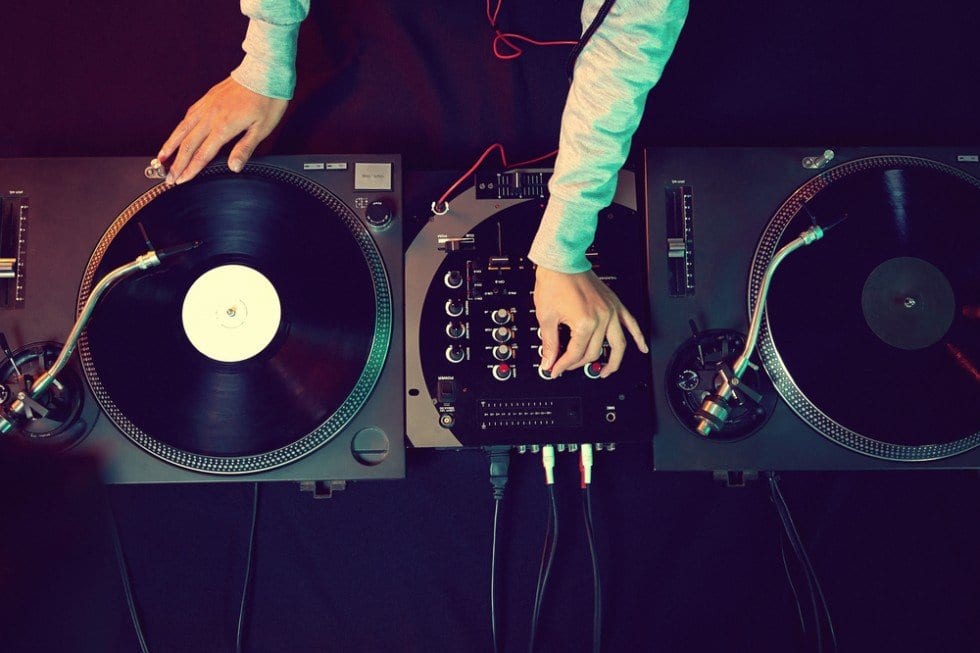 Songs are recorded at different tempos, usually expressed in ‘beats per minute’ (BPM). A hip-hop track might be around 90 BPM, while a house tune would sit around 125 BPM. In order to segue smoothly between tracks, a club DJ will alter the speed at which his records are spinning, using a slider built into each turntable, until the tempos, and therefore the beats, match. So if you have a song on one deck recorded at 100 BPM and a tune on your other turntable recorded at 92 BPM, you could make them match by slowing the faster one down by 8%. Or, more commonly, you could speed one up a bit and the other down a bit, so they meet somewhere in the middle.

With vinyl, this process introduces an interesting side effect. A track that is sped up rises in pitch (until eventually everything sounds like Chipmunk voices) and a track that has been slowed down lowers in pitch (until your grandma starts to sound like Barry White). Obviously this can start to sound strange and off-putting at more extreme levels. But a bit of pitch variation is far preferable to the alternative, which is clattering, off-kilter beats – a so-called ‘train-wreck mix’. Clashing drum beats are right up there with fingernails on a blackboard. It’s a sound our brains are preconditioned to hate. 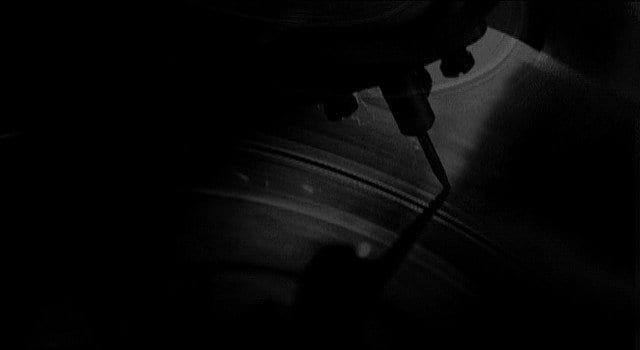 But how does any of this apply to Twin Peaks: The Return? Well, if we accept that the plot arcs we’re seeing take place over different lengths of time – some playing out within a single day while others spread out over a week or more – then we must also accept it would be necessary to adjust their ‘playback speed’ to ensure they match over the course of the series. The passage of time within each would need to be stretched or compressed to ensure the major narrative ‘beats’ line up in a complimentary and meaningful way, thus avoiding the storytelling equivalent of a ‘train-wreck mix’.

This metaphor goes some way to explaining the differing energies in the various plots. Some storylines – I’m thinking especially of Dougie Jones’ strand, or the FBI investigation – appear unnaturally slow, like they’re swimming through treacle.  Others – like Richard Horne’s plot – have an intense, agitated energy that is released in sporadic, fast, violent bursts. Within this ‘DJ mix’ framework, it also makes perfect sense that some scenes and sequences seem so elongated. Sometimes The Return feels like those YouTube videos where they stretch a Justin Bieber song by 800%. This process has a remarkable effect of transforming the source material, turning three minutes of pretty power pop into a swirling, sweeping sonic smear, a droning epic ambient masterpiece. Perhaps if you take old Twin Peaks and stretched it out, you might end up with something like The Return.

Lynch and Frost are revealing a ‘DJ mix’ approach in other ways too. A good club DJ will often fade records in and out, teasing the crowd with a familiar melody or beat to build a bit of excitement, then removing that element altogether only to reintroduce it in full force later, to dancefloor-devastating effect. The impact when this familiar tune finally drops is heightened by that earlier tease. In terms of The Return, this is akin to showing us Hawk at Glastonbury Grove in the opening episodes, and then leaving that image hanging, creating tension, anticipation and intrigue.

The series also incorporates elements of another form of mixing – ‘a cut and paste’ model typified by early Double D and Steinski releases. These were artists making records out of other records. Rather than playing instruments, they were splicing pre-existing audio to create pop-cultural collages. They would take passages of different tracks and TV shows on reel-to-reel tape, slice them apart and stick them together to make new creations, filled with looping passages, exciting juxtapositions and unexpected shifts. Nowadays, these techniques are practiced in real-time by insanely skilful scratch DJs. 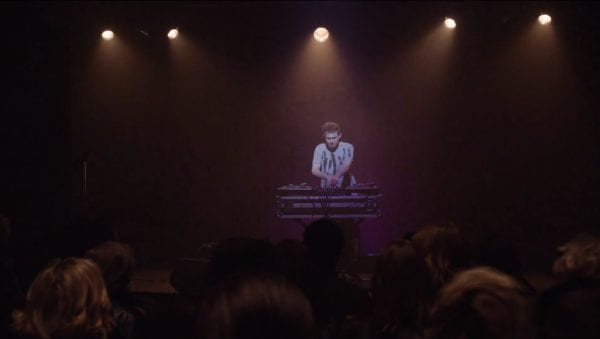 Those early hip-hop pioneers were obviously not the first to use cut-up methods. The surrealists and Dadaists famously applied these practices to their works. William Burroughs, one of the most famous literary exponents of cut-up, said: “[the] method extends to writing the flash back used in films, enabling the writer to move backwards and forwards on his time track …. This method is of course used in music where we are continually moved backwards and forward on the time track by repetition and rearrangement of musical themes.”

Looking at his other works – Inland Empire, Lost Highway and Mulholland Drive in particular – it is obvious that Lynch is fascinated by this ability to disorientate and unsettle an audience by playing with chronology in creative ways. So it is no surprise that these cut-up techniques, with their associated impacts on timelines, are present in The Return. We are frequently shown elements outside their narrative contexts, scenes are dropped in as ‘one-shot’ moments book-ended by apparently unrelated material. One stark example is Dougie-Cooper and Sonny Jim’s baseball scene. Placing this snippet of absurd physical comedy in Part 12 defies any narrative logic in terms of the Las Vegas plot, but it does makes sense in terms of the texture, rhythm and feel of the episode. 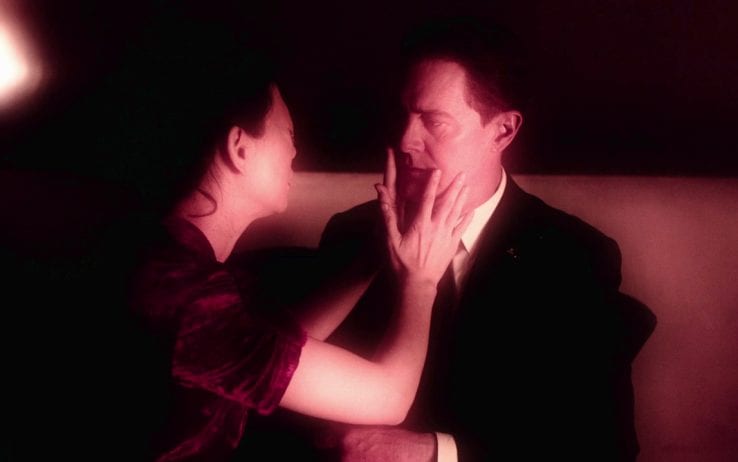 Another vinyl DJ technique visible in The Return is scratching. By manually pulling a record back and forth underneath the stylus, it is possible to create brand new sounds, manipulating the timeline of the audio in a rhythmic and creative way. The effect this produces is exactly like the glitchy time-quake stutters seen in the unforgettable ‘Mauve Zone’ sequences of Part 3.

As I started down this train of thought I was reminded that records and record players have explicitly appeared in Lynch’s work on many occasions. In The Return’s enigmatic opening scene, an old-style gramophone playing mysterious sounds sat prominently between Cooper and the Giant. Inland Empire and Eraserhead also feature record players. But one of the most memorable appearances of a record deck in Lynch’s oeuvre comes in the original run of Twin Peaks, during the terrifying sequence in which Leland/BOB murders Maddy. The whole scene, in which Sarah Palmer is drugged and Leland prepares to confront his niece is played out to the sound of a sinisterly skipping record.

This image of a record skipping, stuck in a perpetual, unnerving loop, also has resonance in The Return. Part 13 showed Sarah Palmer drinking, sat in front of a strangely looping TV broadcast. She seemed oblivious to the unusual behaviour of her television, but the effect seems powerfully reminiscent of the record skipping at the Palmer house. And in a way that’s a perfect metaphor for Sarah – who cannot escape the horror of that time and seems stuck in the behavioural loops of addiction.

Given that Lynch and Frost are consciously doing all this stuff for structural and creative reasons – warping timelines, taking elements out of context and juggling plots to ensure the ‘beats’ line up – it does seem a bit counter-intuitive that they should choose to explicitly mention so many dates, times and days of the week in The Return. Surely the best solution plot-wise would be to fudge the issue by avoiding specifics entirely? But they have gone headlong in the other direction, overtly tying the story to specific times and dates.

Please permit me a quick aside: I remember once seeing punk student Vyvyan, in a spinoff book from anarchic 80s sitcom The Young Ones, giving advice to teenagers on dealing with spots. He suggested drawing a thick circle around the zit in marker pen. As a spotty kid, this made me laugh but the idea has stuck with me as being actually quite profound. It’s about becoming so comfortable with an apparent shortcoming that you can “paint it red”. Rather than hiding a flaw, you can own it and celebrate it. 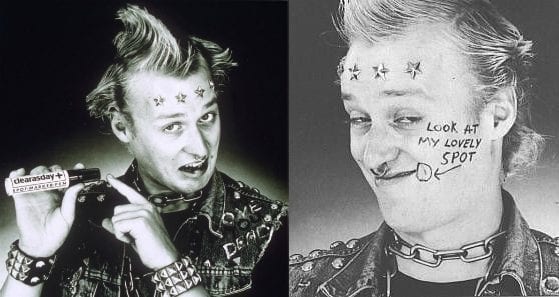 So perhaps that’s what we’re seeing in The Return – maybe Lynch and Frost are owning the horological weirdness and highlighting these time distortions rather than obscuring them. Elements of Part 13 definitely seem to indicate they are ‘painting it red’ and to some extent it does make me wonder if (contrary to my previous article) they actually might manage to integrate this disruption to the ebb and flow of time into the plot somehow. It would be a dazzling achievement if they could. Just as I was about to post this article, I discovered that this act of highlighting a potential narrative flaw is known by many writers as ‘lampshade hanging’, or ‘lampshading’. Given Lynch’s frequent creative use of lamps in his work, this term seems especially apt.

I should note that I’m not alone in exploring these ideas. Lots of people in the community are thinking about these topics. Shout outs should go to John Bernardy on this very blog – whose detailed timequake theory is absolutely fascinating. Also the Time for Cakes and Ale podcast and the Lost in the Movies blog are both exploring some really fascinating takes on this stuff in their most recent episodes/posts. I hope the metaphor of vinyl records – mixing, skipping, jumping, slowing and speeding – might add something to the conversation. As always, we would love to hear your thoughts, so please comment below, or get in touch on Twitter or Facebook.

[EDIT: I’ve just realised this post will be published on 11th August – the anniversary of the legendary ‘back-to-school’ block party where DJ Kool Herc played and launched a new DJ style that would come to define hip-hop. I’d love to say this was planned, but as Agent Cooper so wisely observed: “Fellas, coincidence and fate figure largely in our lives.”]