Welcome back to Homeward Bound Part 15! And what a part it was! So much happening between part 14 and 15 that it’s starting to feel like we’re approaching the high point of the season. I certainly think so. Back to our scheduled programming for this week, of course, with Dale’s plot firmly back on track, if only in one small, but immensely important scene!

We start off with Janey-E again serving Dale a piece of chocolate cake. I’ve never before seen a person who managed to make the act of eating chocolate cake look so unappealing. All the awards to Kyle MacLachlan, but this just goes to show that Janey-E isn’t the right fit for our dear old Dale, eh? Cherry pie’s his poison all the way.

In order for you, my readers, to fully understand how the single Dale sequence in this part went down for me, I need to provide a bit of background information. It’s no secret that coworker Lindsay Stamhuis and I are pretty good friends (we’ve co written several articles and such) but what many probably don’t know is that we’re working on a story together, a noir, for which we happened to prepare by watching noirs together. We’ve seen Double Indemnity and Laura, but we also happened to watch Sunset Boulevard. So when it finally became apparent that the TV was going to turn on after all those random clicks, and I saw the infamous finale scene on the stairway – Nay, the moment I heard Gloria Swanson’s voice (she plays Norma Desmond, just another example of Lynch borrowing names from his apparent favourite noir), I knew exactly what was coming.

Gordon Cole of Sunset Boulevard is a director and exec at Paramount Studios in the film, and the man that Swanson’s Norma believes (delusionally) is going to revitalize her long dead career. Quite the meta name for Lynch to have chosen for his character, isn’t it? But what better way for Dale to return to us than through the mention of Gordon Cole’s name. It’s as though Lynch somehow knew it would come in handy someday…

That is the exact phrase used, and it certainly is indicative of the fact that Dale, too, needs to ‘get’ Gordon Cole. I also think that the state of Norma from that point forward to the end of the film is indicative of Dale’s own – SPOILERS: so wrapped up in her own delusion that she thinks she’s being heralded by the paparazzi for her movie instead of being arrested for the murder she committed in a jealous rage (fun fact, the movie is told in retrospect by the ‘ghost’ of the murdered man). END SPOILERS. I’m not saying that Dale’s delusional, but just that he’s not in his right mind. It’s a fascinating concept that bears further scrutiny, but that’s for another time. 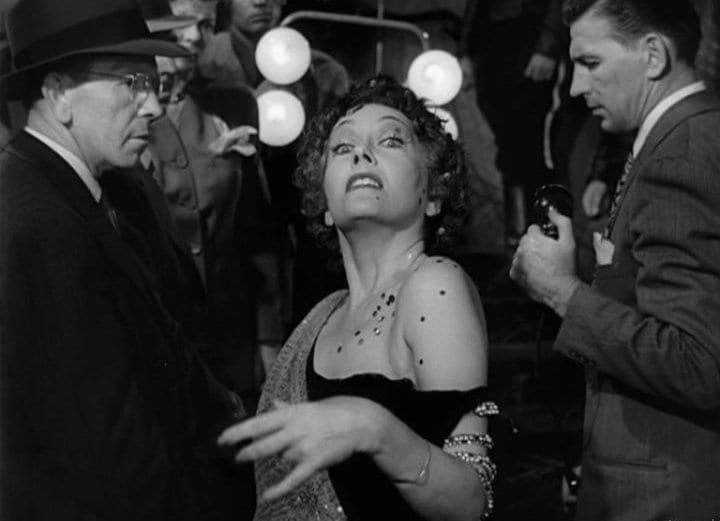 The first bits of dialogue are telling too – Frost and Lynch saw fit to include the bit about “getting the old team back together” – they didn’t have to, but they did, and nothing is up to chance here. Not one thing. But the moment he heard the line, it was written all over his face. Really, folks, Kyle may not have had many lines as Dougie but he’s really hitting it out of the park in the expressions department, and let me tell you, that’s sometimes the hardest part! Dale tenses immediately and his eyes! Oh God that look in his eyes, he was just there beneath the surface, but so, so close to breaking through. I felt so bad when he tried to rewind the television. I know that feeling! But he was so close. Close enough to know exactly what he needed to do.

Now, the last time I saw someone on TV pick up a fork and look at an electrical outlet, it was on House M.D. in 2007. And anyone with decent parents and a basic understanding of science would know what was coming anyways (I have both, thank you). So I was hardly shocked when Dale made a crawling beeline for it. I was excited, absolutely thrilled with anticipation. It was an absolutely spectacular moment, which, out of context probably sounds awful. The determination (and almost resignation, in equal parts?) on his face, his focus on precisely how he needed to hold the fork in order to do what he intended.

The cynical people will say “welp, that’s the end of Dale”.

I think it’s a pretty safe bet that this is hardly the end, but rather the beginning. The end of Dougie!Dale and the return of Dale Cooper. Still not quite whole, but at least in possession of his full mental faculties.

I can’t quite celebrate yet, though I do believe it’s a foregone conclusion, so, to those who nay sayed me – back when I believed (erroneously) that Dale would be back in a couple more episodes – for believing we’d get him back at all, I salute you. I’m glad that I didn’t give up hope (though I came mighty close sometimes).

I don’t think that the biggest question facing us after Part 15 is if Dale is back, but rather where will he be?

We did see him drop to the floor after the power went out, heard the thump, but will he still be there when we get back to him? I posit that, yes, he probably will be. If not, I imagine he’ll be back in the Red Room, or the less likely option that suddenly, he’s going to have a lot longer hair…and a leather coat… But, if he does stay in the Jones house, I will get the moment I’ve been waiting for when Dale, gentle, kind and empathetic soul that he is, tries his best to tell Janey-E that sorry, you’re really wonderful but it’s pie I really like, not cake, oh, and by the way, I’m not actually your husband or the father of your child I’m a missing FBI agent who just spent the past 25 years in an extradimensional space and-

Yeah, you get the picture, but I don’t imagine it will be worded quite the same way…

Another question we might have to ask is what will Dale all know upon awakening? Once, I speculated that Laura, in the Red Room, tells him everything that DoppelCooper has done in GoodCooper’s absence. Is it possible? Sure. I also have put forth the idea that because DoppelCoop is literally half of Dale, he’s always been subliminally aware of what DoppelCoop was doing all along. Which will be horrible. Obviously, this is the bet I’m hedging. The worse it is for Dale, the more I feel for him. I’m an awful human being and so far, Lynch and Frost have been banking on that.

What’s next for Dale Cooper no one can conclusively say, but I have never been more excited for next week, or more at peace with the future of The Return than I am in this moment.