One of the most incredible things about Part 16 is that it’s the one where Dale Cooper finally wakes up…and that wasn’t the most interesting part of the episode! It was certainly the most emotional scene, the moment we were expecting and which many dreaded may never happen, and it was, to quote my husband and Bickering Peaks podcast co-host Aidan, executed flawlessly. But there was so much else going on that, once the moment was over and our emotional states had been recalibrated in the face of what we’d just experienced, we were hit with the one-two punch of Diane’s manufacture and Audrey’s entrapment. Suddenly, Agent Cooper’s awakening — stunning though it was — was overshadowed by the very real danger surrounding both women (women, I hasten to add, who were both connected to Cooper on a some level once upon a time, and whose fates now seem entirely tied up with his.)

In many ways, the article ahead of you is the Part 2 to “This Mystery Has a Blueprint” from earlier this week. I didn’t know at the time that I’d be continuing this conversation in this way, but as you’ll see, that’s very apropos considering the subject matter. 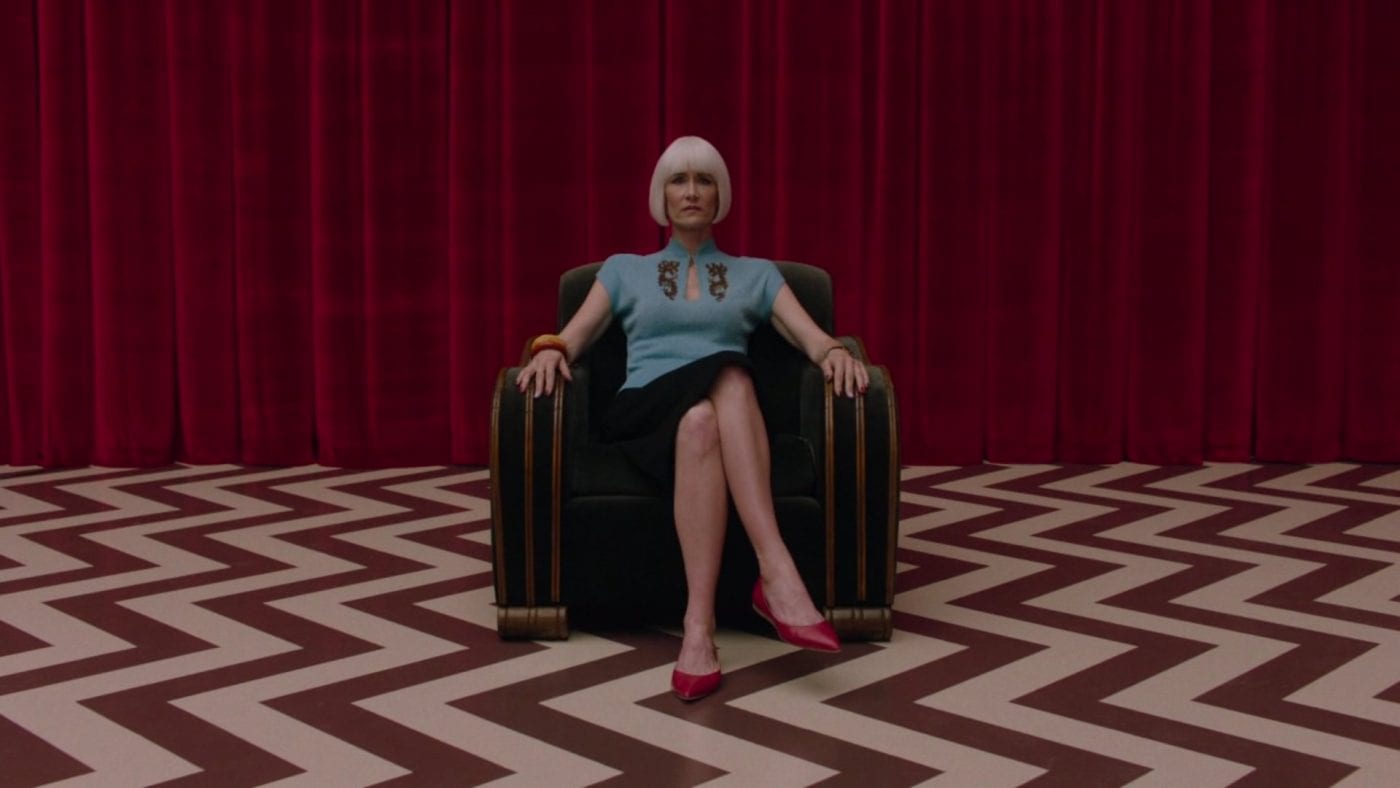 We weren’t the only ones to notice that Diane’s “death” in the hotel room mirrored, to an extent, Laura’s disappearance from the Red Room in Part 2. Diane is shot several times by Tammy and Albert, “killing” her before she is removed from their presence with [intense whooshing], leaving the FBI agents (and the audience) stunned into silence. In the very next scene Diane faces Philip Gerard, who informs her that she was manufactured, mirroring the scene with Dougie in Part 3. The similarities end there, and we’re faced with several key differences instead: Laura is dramatically vacuumed out of the Red Room, while Diane is sucked back in; and unlike Dougie, Diane is self-assured in the face of the information that she isn’t real. Where Dougie expressed confusion and fear, Diane is assertive. “I know,” she replies to Gerard. “Fuck you.”

In one relatively brief scene, we are explicitly forced to recall the final scenes (for now?) of two other, pivotal characters from the first Act of this sprawling movie. These mirror images serve to highlight the similarities and differences between what we saw before we knew what we were looking at, and what we’re seeing now that we have more information. (Not terribly unlike Audrey, staring at her face in the mirror at the end of Part 16 — is she seeing herself for the first time in a quarter century? Does she recognize the face staring back at her?)

The Return does this a lot, as do the rest of Lynch’s films. Answers arrive before we know what question we are supposed to ask, and it’s only later that we realize the answer was right there the whole time. We intuit the methods of Cooper’s resurrection without realizing it. We intuit the strange glitches in time and space without realizing it. We intuit the weirdness and horror in Diane and Audrey’s backstories. When these things are later revealed to us, the process of going back to uncover what we knew and when we knew it is immensely rewarding, and will keep us busy for years to come, I suspect.

(This is even how, it seems, Mr. C has information from Diane’s text message before he’s requested the information from her. Lynch and Frost planted the timey-wimey weirdess of the text messages to send observant viewers off-balance, of course, but also to show us the method we’d later use to uncover the mysteries at the heart of the show. We just didn’t know it yet.)

In watching Diane’s scenes, and in being called back to two other scenes, while knowing how David Lynch and Mark Frost expect us to be reading them, what are we supposed to take away from her death?

We watch Diane burst into an empty black flame and disintegrate into a gold ball — just like Dougie did. Unlike Dougie, she doesn’t seem to contain a misshapen black stone, which looks a lot like the eggs we saw spewed out by the Mother of Abominations in Part 8, and which begs the question of where that particular inner piece comes from. A likely explanation is that tulpas created by BOB or BOB-linked doppelgängers are infused with this dark energy…which now makes us wonder why Diane, supposedly created by Mr. C under BOB’s influence, doesn’t contain the black stone. But let’s leave that aside for a moment.

After Diane disappears, Tammy calls her a tulpa. We know what a tulpa is because Tammy explained it to us in Part 15. At the time it felt like a redundant throwaway, something to colour the scene by giving us a name we could point to without revealing much more about what they actually are, or what it means. Diane seems to be the first confirmed tulpa, but as we watch Diane’s tulpa reduce to her base metals just as Dougie did, it becomes feasible to assume that Dougie is a tulpa too. All well and good.

But we have new information thanks to Agent Cooper, info we didn’t have when we watched Dougie’s tulpa disintegrate, or even when Tammy first defined the term: the gold ball produced by Dougie and Diane is a seed. Apparently, combining a seed with biological material from a living person creates a tulpa that is identical to the living person. But either way, alchemy and (dugpa?) magic are being used to create facsimiles of real people. Thus Dougie was born (from Mr C? From Agent Cooper?) as many years earlier Diane was born (from the real Diane?).

And aren’t tulpas thoughtforms “created in the mind, acting independently of, and parallel to your own consciousness”?

Didn’t The Fireman create Laura’s gold orb from his head? Could a magician be strong enough to create a tulpa from thought alone?

Is Laura The Fireman’s tulpa?

2/3 the tulpa’s gold seed is some way similar to the Laura gold orb created by the fireman. Same purpose with the same shape…

Laura is dead and yet she lives. She told us that when we last saw her in Part 2, right before she was sucked out of the Red Room the way Diane was later sucked in. We have spent all season wondering how this was going to play out, and many have come close to solving this, we just didn’t have the terminology to properly conceptualize and contextualize the answer we intuited. Now, I think we are absolutely supposed to revisit this scene and understand it in this new light, with the new information we have, in order to come to the conclusion that The Fireman manufactured Laura as a tulpa and sent her to Earth. For what purpose? It’s not immediately clear, but possibly to shield the real Laura from harm, in a Prestige–like fakeout that has been decades in the making.

Now, remember above when we talked about the lack of a black stone in Diane’s base ingredients? Aidan had a lovely theory which he spoke about at length on our podcast this week, in which he wondered if Major Briggs had somehow managed to create a tulpa of Diane before Mr. C got to her, and that he’s stashed Diane away in the form of Naido (and possibly American Girl too) until it was safe for her to return. This would mean that the Diane Mr. C assaulted a few years after his disappearance was not the real Diane but her tulpa, and Mr. C created a copy of a copy; the real Diane is being safely guarded far away from harm. 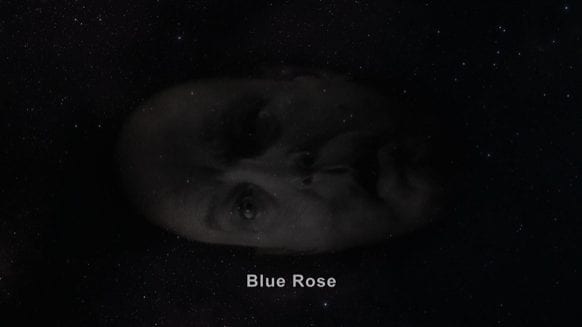 The theory has legs when you consider that Diane says she is at the sheriff’s station (which is where Naido is being kept for her own safety), and if you remember that Briggs was there floating outside Naido and American Girl’s Purple World domicile, a sentry protecting her from harm. Maybe it’s a long shot but if Diane has been hidden to protect her; is it possible the same thing has happened to Laura? Was she sent to live somewhere else? Under another name, like Dougie? Or under the same name but without some of the key memories of who she was, like Diane? Is this what Leland meant when he implored Agent Cooper to find Laura?

And this doesn’t even touch the mechanics of manufacture as they pertain to the manufacturers themselves. Mr C/BOB can do this; Philip Gerard/MIKE can do this; The Fireman can do this. If Major Briggs can do it too, it puts him in a category above and beyond the standard earthbound heroes of Twin Peaks. A wild theory I batted about with my fellow editors last week — that perhaps Major Briggs (or his head, at least) evolved into The Fireman, like the Arm evolved into Mike evolved into the Braintree — doesn’t seem that far-fetched now. I mean, he did float in the air (according to Bill Hastings) and it was beautiful (just like when The Fireman did it while creating Laura’s golden orb) so…

Wouldn’t that be a fitting tribute to Major Briggs as a character and Don S Davis as an actor, for this evolution to have occurred and for him to be playing such a pivotal role in the overarching mythology?

So where does this leave Audrey? It’s possible the woman we saw in Parts 12-16 was a

tulpa, but something about the world she inhabits feels off, as though the whole thing has been manufactured and not just her (so, then, can places be tulpas too? Could The Roadhouse be manufactured? Could all of Twin Peaks?). My gut feeling is that Audrey been taken someplace too, possibly for her own safety (and Briggs again seems the most likely person behind that); her reappearance in what feels like the real world at the end of Part 16 coincides with her son’s demise via the same electricity that crackles around her in her final scene. Maybe she was meant to be imprisoned as long as Richard was alive. Or, since Diane was taken to the convenience store after Mr C’s assault on her, and we have been strongly clued in that something similarly sinister happened to Audrey, it’s possible she was taken to the convenience store by Mr C too. Could the real Diane (or Briggs’s copy of the real Diane) be at the Dutchman’s, with Jeffries and Audrey? Have I gone off the deep end?

Whatever the final result, something truly incredible and ground-breaking is going to happen on September 3rd when the finale of The Return hits our TV screens.