The following is a guest post by Duncan Sneddon. His bio and Twitter handle are included at the bottom of the article. Hope you enjoy!

To start with a banal truism, Twin Peaks: The Return, in common with much of David Lynch’s work, defies straightforward interpretation.  It doesn’t offer much satisfaction in the way of a clear, linear narrative, but rather relies for its effect on a complex web of symbols, allusions and intense emotional hits (even if the viewer – certainly this viewer – is not always entirely sure what the emotions they are feeling so intensely actually are).  In this respect, Twin Peaks is hardly unique in art, but it is certainly highly unusual in mainstream television.

For myself, while I certainly enjoy reading and listening to the various arcane and often ingenious theories that fans and critics have come up with to explain what the hell is going on with Dale, Audrey, Diane, Naido, and Freddie And His Magic Glove Of Punching, I’ve never found that unraveling the mysteries is the most enjoyable thing about the series.  I can enjoy the show immensely without understanding much of what’s going on.  What I’ve found most rewarding about The Return, apart from the performances, atmosphere and sheer array of brilliant moments, has been spotting and hearing about the connections between the show and other works.  Obviously, there are connections with the rest of the Twin Peaks canon, but the visual and stylistic quotations that connect the Lynchiverse to itself and to other works that Lynch and Mark Frost admire and respect have been among my favorite things about The Return.  From the Eraserhead-esque claustrophobia and steaming machines of the Great Northern’s furnaces to Sunset Boulevard on the Jones’ TV in Part 15, or the nods to Kubrick in the magisterial Part 8, Twin Peaks: The Return connects to so many other works in so many ways, and knowing those works makes watching the show a much richer experience – and I think that holds true even if the allusions and connections exist only in the mind of the viewer.  Obviously many of these connections passed me by, and I’ve enjoyed hearing them elucidated, especially on podcasts like Wrapped in Podcast and the Double P Podcast Network’s hilarious and insightful The Gifted and the Damned.

One of the connections which I’ve noticed, and which I’ve not seen or heard others talking about yet (though please do direct me to such discussions if you know of them – I’d love to check ’em out!) is between the character of Coop-as-Dougie Jones, and Werner Herzog’s 1974 film The Enigma of Kaspar Hauser (originally titled in German Jeder für sich und Gott gegen alle – Everyone for himself and God against all).  I’ll discuss the two here, avoiding spoilers for Herzog’s film for those who haven’t seen it.  I really would recommend the film highly.  Even if you’re not interested in or convinced by the connections between The Return and Kaspar Hauser, it is certainly worth watching in its own right as an intriguing exploration of identity, of how people do or not fit into society, and of the development of human intellect and consciousness.

The Enigma of Kaspar Hauser is loosely based on the true story of a young man who turned up apparently out of nowhere in Nuremburg in 1828.  Clutching an anonymous letter of introduction addressed to a local cavalry officer called Captain von Wessenig, a prayer book and a few other effects, and barely able to walk or speak, he repeated over and over  the one sentence he could form: I wish to be a gallant rider like my father before me.  Like an infant, he had to be taught to speak, to dress himself, and other such basic skills.  Some time later, when he had learnt to speak, he told the people who looked after him that he had been raised in a dungeon-like cellar until very shortly before his release.  He had lived in darkness, having no contact with other people, or even any conception that other humans existed, as food was left for him when he slept.  He had never seen a tree or a bird, or had any idea of language, of logic, of God, of family, of community, of nature – of any of the basic points of reference of human life in early nineteenth-century Germany.  Naturally, this aroused great curiosity, which heightened when people heard of the inoculation marks on his arms that suggested he was from a relatively high social class.  Outlandish, and often frankly ridiculous, rumors spread like wildfire:  he was an illegitimate son of Napoleon, he was a secret heir to the house of Baden, he had run away from an English circus, and the like.  The Pavlovian popular press were drawn, as they always are, to the titillating prospect of scandal; intellectuals, still high on Romanticism and giddy with the idea of the ‘noble savage’ ever since they’d first swooned over their copies of Ossian, were queuing up to meet this Naturkind; theologians wanted to know if he had any innate concept of God – in short, he was quite the sensation.  To this day, nobody knows for sure where he came from, or how true his claims were.  Some have suggested that he was a swindler, or a fantasist, but Herzog’s film is content to take Hauser at his word.

When I recently re-watched The Enigma of Kaspar Hauser, it seemed that the first half hour of the film was practically screaming DOUGIE JONES at me.  Not only does Kaspar have to be practically dragged anywhere (walking being an unfamiliar concept), but he is barely able to speak.  Apart from repeating his garbled sentence about wishing to be a gallant rider, he also on one occasion simply repeats the last thing said to him, which his interlocutor takes as a reasonable answer.  The townsman who finds him standing alone and blankly staring ahead  asks him:

And his coming from Regensburg is then taken as read.

Shortly after, he mumbles the only other word he knows, though he doesn’t know what it means, “horsey”:

Much like Dougie Coop in The Return, everybody can see plainly that there’s something not quite right about this man, but they’re happy enough to interpret his words, which are really parrot-like utterances devoid of real meaning, as active parts of their conversations.

Similarly, much as Dougie Coop seemed to have, at some level he couldn’t quite grasp, a consciousness of being an FBI agent (“Case files”, “agent”, touching the statue), Kaspar’s letter, one sentence and the word “horsey” have him primed, albeit very poorly, for being a cavalryman.  Most strikingly, when the cavalry captain wakes him up in the stable, he starts to paw at his epaulettes, much as Dougie Coop repeatedly pawed at the police officer’s badge in The Return Part 6. 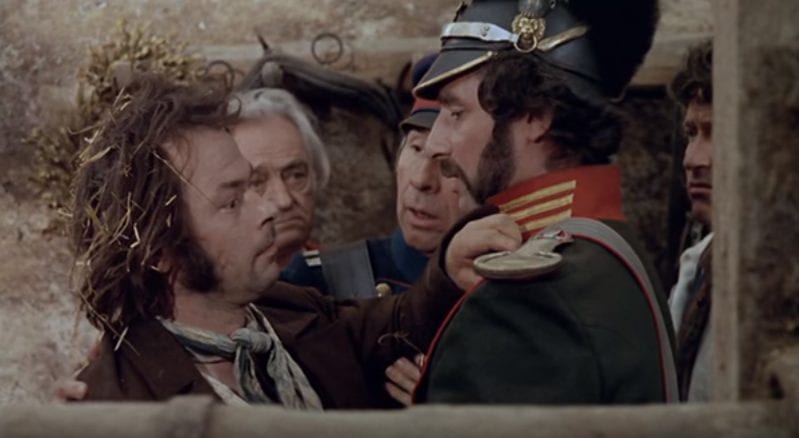 Kaspar paws at the epaulette of the cavalry captain 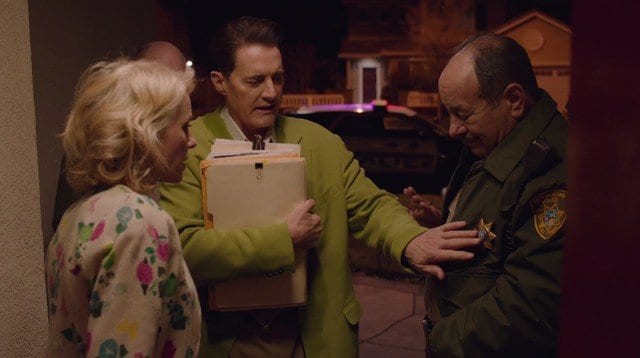 As with The Return, parts of The Enigma of Kaspar Hauser also seem to connect both to other works by Herzog, and to classic cinema.  For instance the circus master (played with roaring aplomb by Willy Semmelrogge) seems to recall the circus scenes with the hypnotist Dr. Caligari (Werner Krauss) in Robert Wiene’s 1920 classic The Cabinet of Dr Caligari, while in the same scene the character of the nose-flute playing Hombrecito (Kildat Tahimik), who is terrified of stopping playing lest disaster come, is based on Herzog’s real interactions with an extra on his earlier film, Aguirre, The Wrath of God.

But what really made me think of Dougie Coop when watching The Enigma of Kaspar Hauser was the performance of Bruno S.  Bruno, who preferred not use his full name, as he wanted to avoid the limelight, and enjoyed working as a street musician and a forklift driver at a steel mill, is magnificent in this, his first film.  He had no training as an actor, and was already past 40 when Herzog cast him to play the adolescent Kaspar Hauser, and this naturally made investors wary of contributing to the film.  Herzog’s choice was inspired.  Bruno was the perfect man for the role, and turned in an astonishing performance.  Herzog has worked with many, many great actors over the course of his long career (perhaps most notably with Klaus Kinski, but also with actors who have also worked with David Lynch, such as Nicolas Cage, Willem Dafoe, Brad Dourif and Grace Zabriskie), but he has always spoken very highly of Bruno.  In Kaspar Hauser, he seems to prefigure Kyle MacLachlan’s Dougie Coop – blankly reacting (or not reacting) to the things going on around him, in the world, but not of it.  Both performances are masterful, amiable and melancholy – and not a little unsettling.

I don’t know if the correspondances are deliberate.  I don’t know if MacLachlan watched The Enigma of Kaspar Hauser in preparing for the role of Dougie Coop.  Lynch and Herzog certainly know each other well – in fact, Lynch was the producer for Herzog’s excellent 2009 film, My Son, My Son, What Have Ye Done? (which also features Twin Peaks favorite Grace Zabriskie, as well as oatmeal, flamingos, Willem Dafoe, and an irritable ostrich.  It is a strange film.).  I wouldn’t be surprised if Bruno S’s performance was somewhere in Lynch’s mind when he was directing MacLachlan as Dougie Coop.  Either way, he’s not likely to tell us.  But whether or not The Enigma of Kaspar Hauser was a reference point for either MacLachlan or Lynch in making Twin Peaks: The Return, having seen them both so close to each other, they will always be mutual points of reference for me.  I won’t be able to see the one without thinking of the other.  And for me, as I said above, that’s one of the most rewarding things about Twin Peaks.  Its dense layers upon layers of symbols and allusions and quotations create a visual and narrative texture quite unlike anything else on television.  The well of references Lynch and Frost dug is unlikely to run dry: every time I watch something from the sprawling, rambling, hilarious, terrifying saga of Twin Peaks, I’ll enjoy drinking full and descending.

Duncan Sneddon is a PhD student in Scottish History at the University of Edinburgh.  He also writes short stories in Scots and English, and has translated poetry from several different languages, mostly into Scots.  If you have nothing better to do, you can follow him on Twitter at @Cruithneach