The iconic David Duchovny is one of the most recognisable faces from American TV over the past 25 years, having starred in shows like The X-Files, Californication, and Aquarius. While his film career hasn’t reached quite the same heights, he has appeared in a number of high profile films including Richard Attenborough’s biographical comedy-drama, Chaplin. The Joneses, released in 2010, remains one of his most overlooked works and is the perfect film on which to base my latest “As Seen on Twin Peaks” discussion.

This series takes a look at the acting careers of the cast of Twin Peaks – one performer at a time. But, instead of looking A-Z through their entire filmography, I’ll be picking out one film to represent each actor, which will be followed by a 10 Questions-style discussion between myself and one of my fellow 25YL staffers about the film and various other credits. Now, the films I’ve picked to be discussed are not necessarily each actor’s most famous role, or most critically acclaimed performance, or biggest box office success. Instead, I’ll be focussing on those hidden gems, overlooked treasures and underrated masterpieces. And, to make things more interesting, each article will feature a range of different perspectives between myself and my guest. Some films will be familiar to the two of us, others might be first-time watches, and some movies will be a completely new experience for us both.

So, join Eileen G. Mykkels and I as we discuss David Duchovny, his career, Twin Peaks, The Joneses and more!

1) Jon Sheasby: The Joneses is one of those films that I stumbled upon on TV years ago. I didn’t know what it was about, but I decided to give it a chance because of the cast. I ended up loving how smart and funny I found the film and was surprised by how dark it was too. What is your opinion of The Joneses, Eileen?

Eileen G. Mykkels: Ultimately, I sat down to watch it purely because I like David Duchovny. I thought it ended up being a really excellent commentary on materialism in the United States and it just was really enjoyable to watch. Maybe it is somewhat more enjoyable for people who like dark humour, but all in all, I thought it was pretty great.

2) JS: Steve Jones is one of those roles that fits David Duchovny like a glove. He gets to be humorous and charming, but there’s an obvious fragility to the character, which is something that often defines Duchovny’s work. The film would’ve fallen flat if the chemistry between Duchovny and his “family” didn’t click, but thankfully that wasn’t the case. Being a fan of Duchovny, what did you think about his performance in The Joneses?

EM: I think that the best part about Duchovny’s characters is that they’re always so genuine in their emotions and in their actions. It’s his character that first has misgivings about his job and feelings that go beyond the confines of the job. He gets to be emotionally resonant while also like you said being incredibly charming, and always being a touchstone for that dark humour element throughout the film. I think his greatest strength is that he can be incredibly emotional and very relatable.

3) JS: While I was looking online at the critical response to the film, I was surprised by conflicting opinions about The Joneses’ overall message. Reactions range from, “a smart, entertaining satire on greed and materialism among America’s leisured classes” to “a muddled mix of weak social commentary, predictable drama and wan comedy.” Now, I realise film and art is subjective, but these two critics have clearly seen a different film to one another. How anyone could describe the film as weak and predictable is beyond me. Was the satirical commentary on consumerism a success from your point of view, or could it have been taken even further?

EM: I definitely thought it was successful. There’s always a further degree to which somebody could take it, but I think if you go too far then that’s all the movie becomes about and it needs to be about more than just that. What I’ve noticed most from critics who downplay films who say that they’re weak is generally that they weren’t appreciative of the topic, to begin with. The Joneses is definitely a film that makes the kind of commentary people don’t always like to hear, and that’s definitely partially why some people I’ve met have a problem with the movie. Satire is a double-edged sword.

4) JS: One of the many things I love about Duchovny is how he doesn’t take himself too seriously as a performer. Sure, he’s a fine dramatic actor, but he’s also willing to shed any Hollywood vanity to participate in something like Zoolander. We here at 25YL know how much you love The X-Files, but what is it about David Duchovny that made you such a fan?

EM: Some of the best episodes of The X-Files are the ones where they act like total goofballs. I have to say that anyone who could sing the “Theme from Shaft” in falsetto and not break is a miracle worker. So, he’s funny and he can be dramatic. It’s hard as a woman of my age not to be completely and utterly in love with his character Bob in Return to Me, which is one of the few romcoms I can stand. I love his versatility, his willingness to branch out from genre to genre and his candid honesty as an actor. No matter what it is he’s doing he gives his all to that thing. I’d say even beyond his acting I appreciate his writing and his directional attitudes.

5) JS: Speaking of The X-Files, now that some time has passed since the Season 11 finale, has your opinion softened or are you still disappointed by the lack of any meaning regarding what could be the final time we’ll ever see Mulder and Scully?

EM: To be honest, I just kind of ignore it. It’s easy when so many people were disappointed by it to simply just pretend it never happened.

6) JS: A great thing that happened to our site recently was Rob and yourself getting to review an advanced copy of Duchovny’s latest book, Miss Subways: A Novel. It was an awesome thing for the site, and I bet you were overjoyed to have the opportunity to read it, huh? Besides his acting career, have you delved into Duchovny’s other projects too? He’s been a pretty busy guy over the last few years, releasing two albums and three books, all while continuing his acting commitments!

EM: I’ve listened to both his albums, of which I like the second one better because the first one’s a little bit more country and that’s not really my style. I’ve read his other two books as well. Bucky F*cking Dent is definitely great, but Miss Subways was pretty incredible. I remember when I first heard that he was going to be doing music and I kind of snickered to myself because he’s not the sort of person you’d anticipate having a lovely singing voice. But just like everything else he does he’s put his whole self into what he’s doing, and it’s not so much about how it’s received as doing it to satisfy his own personal emotional needs and I think that that’s a lovely thing to do for oneself. I also heard recently that Bucky F*cking Dent is going to be made into a movie, which he’s directing so that’s exciting news. 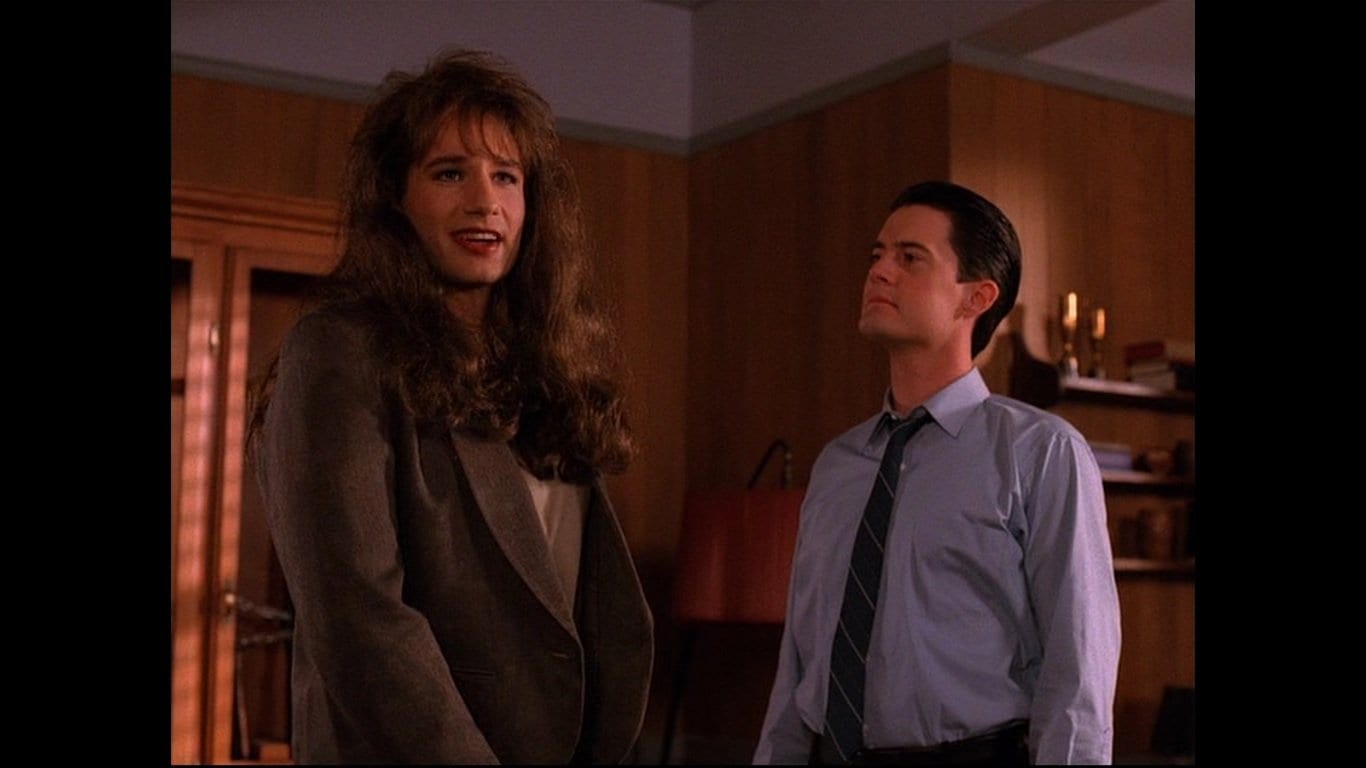 7) JS: The first time I saw Twin Peaks, I went into it completely blind. I knew nothing. Nothing. So, when I saw Duchovny’s name in the opening credits to Episode 18, I was excited about his appearance. Needless to say, I was surprised at first to see him as Denise Bryson, but I immediately loved the character and Agent Cooper’s acceptance of her. Do you remember your reaction, and did you have any prior knowledge that Duchovny portrayed a transgender character in Twin Peaks?

EM: I’m trying really hard to remember because my friend who got me into Twin Peaks – this is my same friend who got me into The X-Files – we watched The X-Files first, but I don’t recall whether she told me or not. And I honestly don’t even remember my first reaction, other than I knew I was going to absolutely love Denise. I do remember being super excited to hear that she was going to appear in The Return and that David would be back to play her. I think those are some of the most heart-warming moments of the earlier parts, between Denise and Gordon.

8) JS: While The Return only featured Denise in a glorified extended cameo sequence, I was overjoyed at how her career had flourished post-Twin Peaks. Having her hold the position of FBI Chief of Staff was a brilliant decision by Mark Frost and David Lynch, and I’m just glad Duchovny was involved in any capacity, unlike other cast members who were unfortunately overlooked. Do you have a favourite Denise Bryson moment from her far too brief screen time in Twin Peaks?

EM: I love when she comes to Dead Dog Farm in the waitress outfit to save Cooper. That’s far and away my favourite moment.

9) JS: Recently, I really enjoyed Duchovny in Aquarius, which I thought was underappreciated by the masses, as it was a fine show that was cancelled early due to low viewership. Outside of what we’ve mentioned here today, do you have any other favourites from Duchovny’s extensive filmography?

EM: Well, I already mentioned Return to Me. I also quite like Kalifornia. And, I guess I have to give an honourable mention to Goats because it’s probably one of the strangest movies I’ve ever watched and yet enjoyed.

10) JS: And finally, Eileen, if you could recast any role from the history of film and TV with David Duchovny in their place, which character would you choose and why?

EM: This is an impossible question. Oh, um. OK, I love Kevin Costner to death – probably more than even David – but I could definitely see him in Costner’s place in Field of Dreams. Let’s just drop David Duchovny into every baseball movie ever and call it good. Yep. Ray from Field of Dreams.

I want to thank Eileen for taking the time to join me for this latest edition of “As Seen on Twin Peaks.” So, you’ve read ours, but what are your thoughts on David Duchovny? Favourite roles, performances, works? Please leave a comment and let us know by following the information about our social media accounts, which can be found below. Alternatively, you can follow me on Twitter (@JonSheasby), and we’ll continue the conversation over there.

More From: As Seen On Twin Peaks