I recently had the pleasure of speaking with Robert Broski, who plays the terrifying Woodsman in Twin Peaks Season 3. I hope you enjoy our conversation.

MH: How did you learn about the role in Twin Peaks and what was the casting process like?

RB: There was a casting call for woodsman-type characters, no information other than that. This was just for a background role so wasn’t an audition for me.

MH: During filming the levels of secrecy were so high that a lot of actors didn’t know they were actually appearing in Twin Peaks until they arrived on set. Was this a similar experience for you?

RB: The first day of shooting, base camp was an hour out of L.A in a place called Acton, in the hills above the desert. It was an afternoon call working right into the night, that was all we knew. After make-up and wardrobe us four Woodsman were stood together trying to work out what we were in for. A black four door suddenly pulls up and David Lynch gets out of one back door and then Kyle MacLachlan out of the other door. We all look at each other and think “Ok” and then they came over to greet us. The mystery then began to unravel.

MH: Oh wow! So were you already a fan of Twin Peaks before getting the role?

RB: I was a fan from the very beginning with Season 1, I was hooked! I saw Fire Walk With Me and ended up buying the soundtracks for both.

MH: So how was your character explained to you?

RB: A normal question with a very non-normal answer. It was just explained as we went along. After each scene we learnt a little more about who we were but I don’t think we ever knew our whole purpose for existing.

MH: Talk us through the night you filmed your scenes.

RB: I had two night shoots, both taking place in the city of Acton. The crew arrives before dark to set up the scenes. As everything is ready we just wait for the right time to start shooting each scene which was either sundown or just after dark. The weather was pretty cool at that time of year so we had plenty of coffee and hot cocoa. We had a snake biologist there to make sure there were no rattlesnakes around as the desert can be very dark and this night was no exception. With only a few lights here and there, stepping away you were in the Twilight Zone. It definitely added to the sensation we were trying to achieve as the car actually did appear and disappear into the darkness. 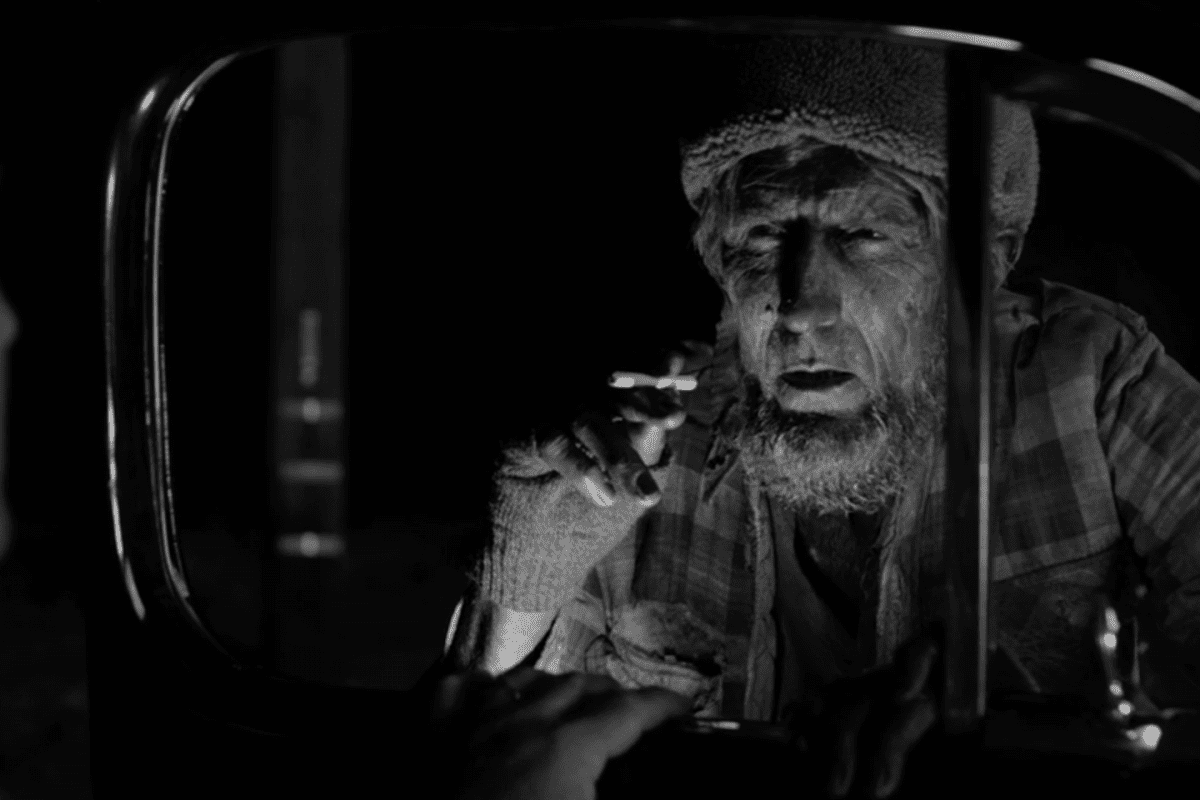 MH: That definitely came across on screen. What was it like being directed by David Lynch?

RB: Being directed by David Lynch, hmm…he did not over explain his motives for each scene and he only ever gave us a simple, clear direction on what he was looking for. Never saw a question on his face on what to do. He knows what he wants and he gets it. To me, he kept stressing “Slower, speak slower”.

MH: Now you mention speaking, your Woodsman is the only one that actually does speak. Was it ever suggested to you that you were their leader?

RB: Wow, actually I never thought about it like that, interesting that I was the only one to speak. But you can see from many of the scenes that we Woodsman work as a team with a group of objective.

MH: Why do you think your character only appeared in the scenes set in 1956 whereas the others appeared in modern day?

RB: I think time and space are irrelevant once we morph into these dark Woodsman.

MH: You got to terrify and murder the other characters you came into contact with, how was that as an actor? Had you done anything similar before?

RB: Speaking of film only, it is fun being the character that puts fear into your heart! Those head squeezing scenes were a little more than I had ever done before (laughs). I have been the bad guy taking care of business, currently ‘Smiley’ in L.A Macabre’s second season, I terrorize people but without the head squirts.

MH: (Laughs) No head squirts, yet! What was it like learning the “This is the water” speech? Did you ever question its meaning?

RB: I didn’t know about the lines until right before we started shooting which is Mr. Lynch and his secrecy again! I had only a few minutes to memorize them. Only after could I stop and reflect on those words. The white horse was used years earlier on the original season and I think the reference to the well draws back to many years ago too with the frightening experience of possibly falling into a deep well and entering a mysterious dimension. After we shot the scene the script just instantly disappeared, maybe down that WELL!! 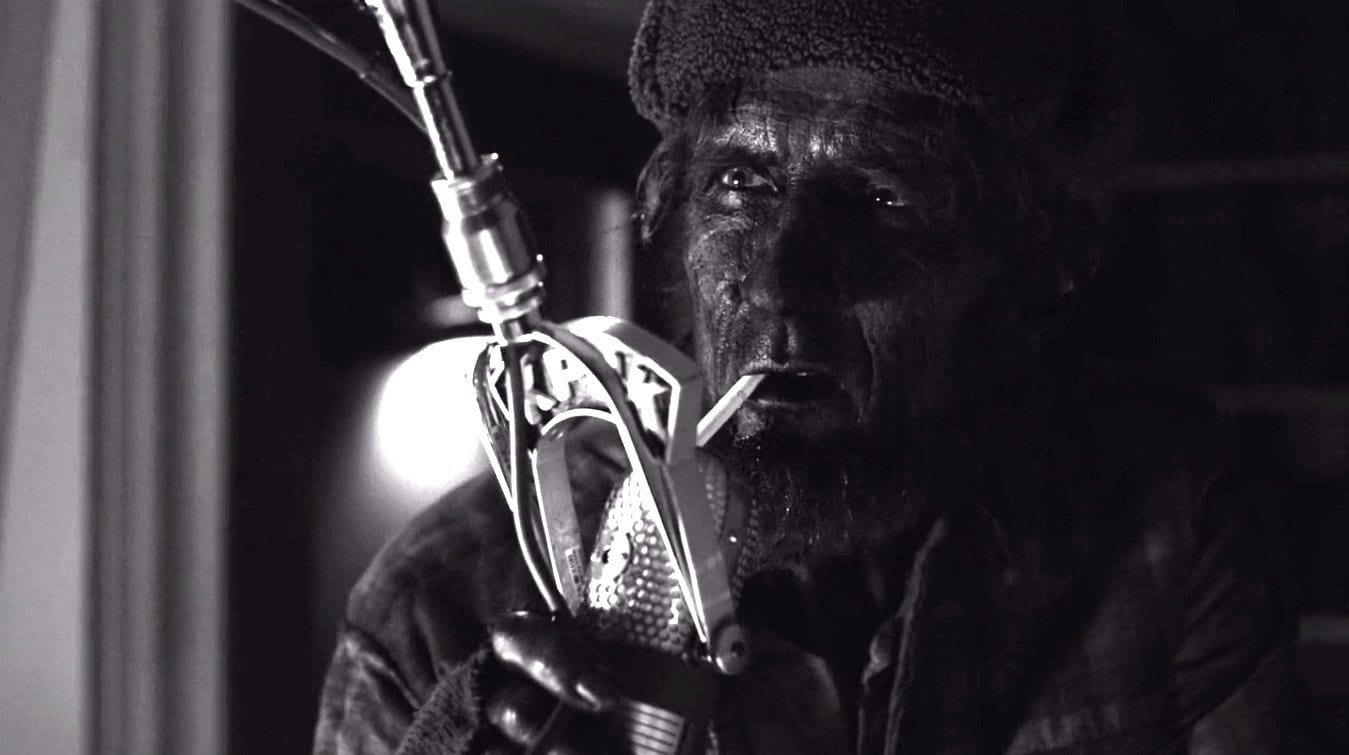 MH: That’s an interesting way of looking at it. Did you know at the time that you were part of such a groundbreaking episode of television?

RB: Not even a hint! Each scene was so independent in itself and how it was all put together is amazing! I received a comment from one of the editors that they had fun editing the cigarette scenes. But, I was as transfixed as everyone else and had no clue to its impact.

MH: Speaking of cigarettes, you’re one of the few Twin Peaks characters to be given a catchphrase. Why do you think “Gotta Light?” became so popular with fans?

RB: Because it’s short and sweet! To the point! But actually never happens. Hopefully no one ever “Gets a light”…

MH: Fingers crossed!! But, what do you think would happen if anybody actually just gave you a light? Something horrifying?

RB: If I ever GOTTA LIGHT! Heaven forbid! All hell might break loose, chain reaction. The signal for the end of time.

MH: It sounds like you have a lot of love for the character. Would like to reprise the role in the future should the opportunity ever arise?

RB: INDUBITABLY! I would love to expand on what Mr. Lynch has in his mind for this dark figure.

MH: What’s the reaction been like since joining the Twin Peaks family?

RB: The reaction from the fans after appearing in this third season has been so overwhelming. Us Woodsman now have fans all around the globe! And they are legit! The love, appreciation, questions and answers have all added to the camaraderie. We all share within the Twin Peaks family.

MH: We are a welcoming bunch! Do you have any favourite on-set memories and stories you’d like to share with us?

RB: One of the more memorable moments which shows how Mr. Lynch likes a ‘hands on’ approach to his work, was the night we shot the walking down the hill to radio station scene. It was a small crew shot and Mr Lynch decided to touch up my make up. It was the outtake photo of us sitting across from each other, 15 minutes of just him and I working together and chatting. It was glorious!!

MH: Outside of the Peaks world you’re more famous for playing Abraham Lincoln in a number of different projects, how did that all come about?

RB: I feel honoured and blessed to present Mr Lincoln. This all really started very simply as an audition for an independent film, Grace Bedell, by Eric Burdett. I had this long thin face that they liked and I had a month to grow the beard, but if they didn’t like it then I would shave it off. Well I looked in the mirror and said “This is my destiny”. The rest is history as they say. I have not shaved it off in over 9 years. 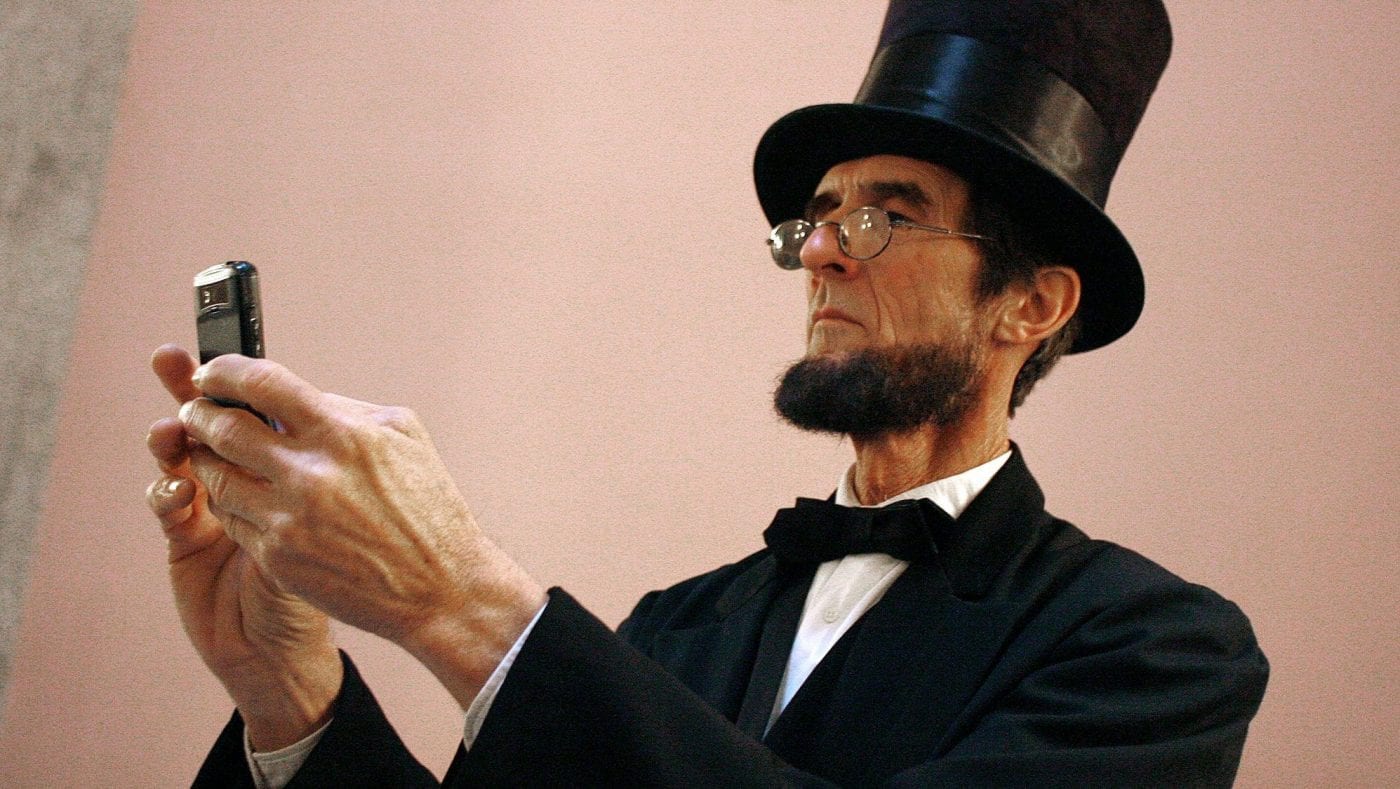 MH: What can we look forward to seeing you in next?

RB: Some other projects are Brian Finn’s A Trip to the Moon which we are just finishing filming this year, a steampunk take on Méliès original from 1902. Also Dan Ast’s L.A Macabre, Season 2, as Smiley, a desert truck driver gone bad. Fun! Plus Francis Galluppi’s, High Desert Hell as an old, bad guy again. Nice!

MH: It sounds like you’re a very busy man. Thank you so much for finding the time to speak with me, do you have any parting words for the readers of this interview?

RB: I believe Season 3 is a justification that Mr. Lynch can pull it off again, turning the tables over once more on our beliefs on what is a reality and what should be a reality. Lastly I would like to do a special shout out and thank you to David Lynch, Sabrina Sutherland and Mark Frost for all of their insight and support. Also to my fellow Woodsman and friends Christian Calloway and Stewart Strauss.

Interview: Michael Horse on The Return, the “Living Map,” Ledger Art, and More!