There are a number of books on Twin Peaks lined up for publication in the near future, largely by academic presses. Right now, though, there are two books that explore Twin Peaks that are certain to engage fans who are looking for analyses of the series that have passed through sustained consideration and development. While theory and think pieces published rapidly online play perhaps the most vital role in sparking conversations within the Twin Peaks fandom, the insights that get fleshed out in books that pass through editorial reviews and writers’ revisions can radically up-level fan conversations. This review provides a taste of two books that are intellectually chewy yet invitingly accessible, that were published after The Return had aired, and that happen to have been written by women.

To set the stage a bit, I’m a college professor who researches and teaches Twin Peaks and all things David Lynch, so I’ve read all the books on the series, and I mean all of them—the good, the bad, and the Dougie. That said, I’m writing this review for smart, curious fellow fans who aren’t necessarily interested in academic approaches to Twin Peaks. 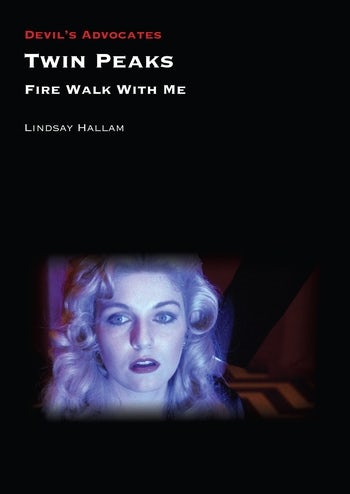 Lindsay Hallam’s Twin Peaks: Fire Walk With Me is among the very top books out there on Twin Peaks. Her approach to the broad objective of framing the 1992 prequel as a horror film is to guide readers provocatively and compellingly through a variety of poignant research and attentive interpretive claims. The book begins, for example, by emphasizing how it feels “viscerally and emotionally” to watch this film. Within academic film studies, there’s been a recent turn from the once very popular psychoanalytical readings of films to what is called affect theory, which focuses on embodied responses and reactions, including neuroscientific studies, to films. Hallam explains the key points of affect concisely without ever compromising their sophistication, and then she brings these to her film analysis throughout the book.

On the subject of research, the book does an outstanding job of choosing key excerpts from sources like interviews with Robert Engels, who co-wrote the film with David Lynch, noted scholars such as Andreas Halskov and Martha P. Nochimson, and the regarded theories of long-time Twin Peaks fan magazine editor and ultra-fan John Thorne. What’s notable, however, is how Hallam triangulates the research she’s selected in order to situate and warrant the complex arguments she makes about the film and in some cases about Twin Peaks as a whole. Whereas more rapidly produced online pieces may cite sources such as Engels or Thorne, the tendency I’ve observed in such writings is to cherry pick quotes that happen to reinforce the theory that the writer is building. But for Hallam, the work of others is included to give a robust sense of the conversation that her book is joining and advancing. At one point she presents the theory Thorne published in The Essential Wrapped in Plastic (itself an astounding resource that any Twin Peaks fan should explore) that claims the first part of Twin Peaks: Fire Walk With Me is Agent Cooper’s dream so that she can tangle with it as a kind of road test to help readers assess her own reading of the film.

Hallam’s book also resonates with the film itself by placing Laura Palmer at its center. On the one hand, the book suggests that Laura can be interpreted as an extremely strong person. And it must be noted that this suggestion works carefully through the challenging matters of Laura’s relationships with her parents and her various sexual partners. On the other hand, Hallam explains how Laura fits into conventional genealogies in film and literature such as the Seductive Daughter figure.

Two final reasons to read this book: First, there’s a keenly perceptive chapter on subsequent films that appear to carry traces of influence from Twin Peaks: Fire Walk With Me. Hallam brilliantly connects Lynch’s film with Nicolas Winding Refn’s strangely under-acclaimed 2016 film, The Neon Demon. Through this and the other doppelganger films named, new vistas on the Twin Peaks prequel loom into view. Second, Hallam puts the prequel film into conversation with the printed paratexts (The Secret Diary of Laura Palmer, The Missing Pieces, The Secret History of Twin Peaks, etc.) and with The Return. This generates a constellation of texts that make multiple new senses of each other as they disrupt linear timelines inside their stories and in our world as they arrive on our screens and in our hands all out of chronological order.

For many Twin Peaks fans, the Introduction and first essay of Bolin’s collection will resonate strongly as she begins by recounting the powerful experience of her first encounter with the original two seasons. Alongside this vivid memory account, Bolin extrapolates from Twin Peaks several core elements of what she terms the genre of Dead Girl shows that have proliferated since 1990. The collection then ranges through memoir-infused analytical investigations of the lives of Britney Spears and Miley Cyrus, the figure of the teenage witch, and Los Angeles as perceived and presented by the writings of Joan Didion as well as tv series like The Hills. So, while it’s just the first twenty pages that focus explicitly on Twin Peaks, the Lynch-Frost series is influentially, if implicitly, haunting the rest of the essays that follow.

Bolin’s book complements Hallam’s nicely as it brings into view some sweeping cultural landscape perspectives that lend a dynamic to the granular intensity of the single-film focused book. In the first chapter, “Toward a Theory of the Dead Girl Show,” Bolin situates Twin Peaks in conversation largely with True Detective but also with Veronica Mars, Top of the Lake, and How to Get Away with Murder. Drawing on a number of important cultural thinkers such as Greil Marcus, the chapter presents a deep consideration of what the dead girls that proliferate in popular tv and other stories in the US do—what anxieties they embody, what historical and cultural crimes get projected upon them, and so on. More specifically, the book focuses on why these dead people are girls specifically. As Bolin puts it, “Just as for the murderers, for the detectives in True Detective and Twin Peaks, the victim’s body is a neutral arena on which to work out male problems.” The chapter ends with a thought-provoking claim that Pretty Little Liars offers an unusual and potentially disruptive use of the typical absence of the dead girl that might help savvy viewers reflect on how these series fit into national cultures of misogyny and feminism.

Many of the essays that follow are equally gripping as the other narratives Bolin interrogates would likely overlap in the sweet-spot of a Venn diagram where Twin Peaks fans are located. One of the most poignant of these documents the process of Bolin thinking through her relationship to her father in terms of what she terms his obsession with Nordic noir novels, Stieg Larsson’s Millennium trilogy in particular. As a parent of two daughters, I was moved by the chapter to be more consciously circumspect about what my own Twin Peaks fixation means and how to communicate about such stories with my kids. I think fellow fans might appreciate and benefit from Bolin’s insights into how the stories people geek out about shape parent-child relationships.

One other chapter to highlight dives into the tv series Dateline. Bolin draws upon the experience of watching scads of episodes to articulate patterns she noticed in these sensationalized accounts of real-life murdered women (though not exclusively, the majority of these episodes do feature women). Because Dateline is a popular series, and one that combines scientific forensics with story reconstruction and speculation, it’s a useful bridge for connecting fictional dead girl shows with non-fictional realities of US culture today.

As a final note, I recommend reading these two books together. While Bolin leads readers to look at Twin Peaks as part of an expansive cultural fabric, I think some of the assessments of the series are challenged by the nuanced representation of the living Laura Palmer that Twin Peaks: Fire Walk With Me delivered. Hallam equips readers to determine for themselves where they might draw the limits of Bolin’s argument. Likewise, Bolin furnishes readers with the context of an under-examined cultural fascination with dead girl shows to balance the single-film appreciation of Lynch’s cinematic masterpiece.