In the first installment of this archive file, I visited first some local Snoqualmie Valley news coverage from 1989 of the Twin Peaks cast and crew filming the Pilot episode. The second installment explored some news stories that registered initial signs of the Twin Peaks tourism phenomenon as it was emerging in 1990 and covered the story of the people behind the pies in the series, and I shared an ad that the Mar-T Cafe ran for the special screening dinner events they held as part of the first season run.

Now, in this third and final installment, I share some of the highlights found in the 13 August 1992 issue of the local newspaper, The Valley Record, as preserved in the archives of the Snoqualmie Valley Museum. Again, with kind gratitude to the museum and everyone I discussed the series with there.

What I found most exciting in the issue was a column titled “TWIN PEAKS FEST Calendar of Events.” Having only attended my first Twin Peaks Fest in July 2018, I found my curiosity particularly piqued by this historical record of the 1992 Fest. That said, I think the calendar will be of high interest to any fan regardless whether you’ve been to all or none of the fests or somewhere in between. 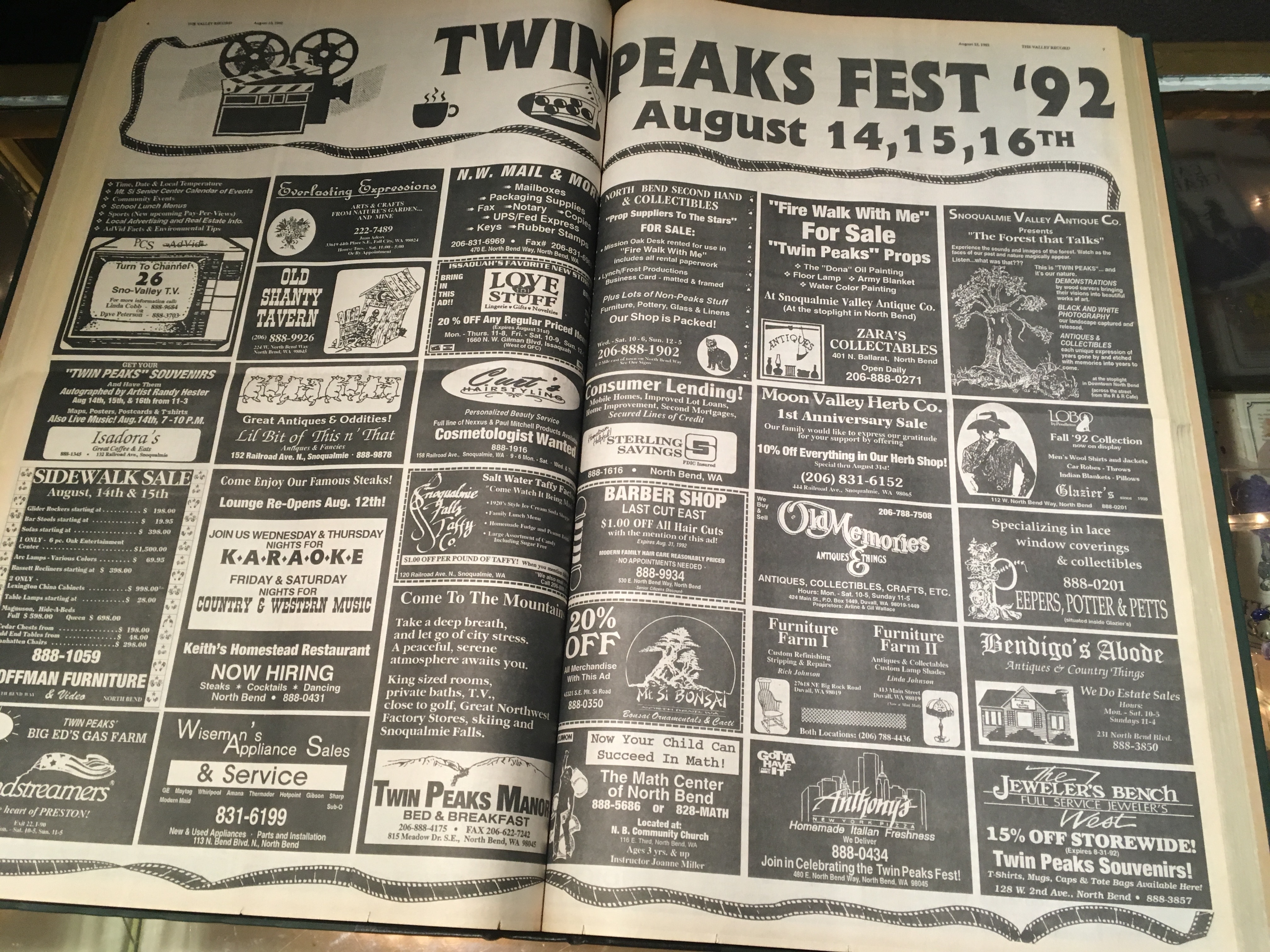 Events of note begin on Friday as the Fest kicked off with a “Preview of Raffle Items: Cooper’s Car, at City Hall.” The preview whetted fan collectors’ appetites for what seems to have been a treasure trove of props, merchandise, and series-inspired artwork available in the area. According to the Fest calendar, Agent Cooper’s car and other Twin Peaks “stuff” was ultimately raffled off on Sunday afternoon just before attendees could shift into a round of Bingo, perhaps as a combined game of chance/mental palate cleanser, before the premiere of Twin Peaks: Fire Walk With Me.

Also included in the Friday festivities was espresso at Isadora’s. The karaoke tradition was combined with a street dance.

Fest folks who were so inclined had the option to start off Saturday with a Fun Run (I can imagine myself with a large coffee in one hand and two donuts in the other cheering on the new-found friends who consider “fun” to be an appropriate adjective to apply to run.) And speaking of new-found friends, Saturday programming also included the “Prodigy Picnic—meet your fellow users.” That event attests to the vital role that online fan community formation played in the success and legacy of Twin Peaks, as well as the role Twin Peaks had in sparking the success of the online fan community and its formation. A cherry pie eating contest immediately preceded the Log Lady Relay Race, and I wonder how much overlap there was in these two contestant bases? 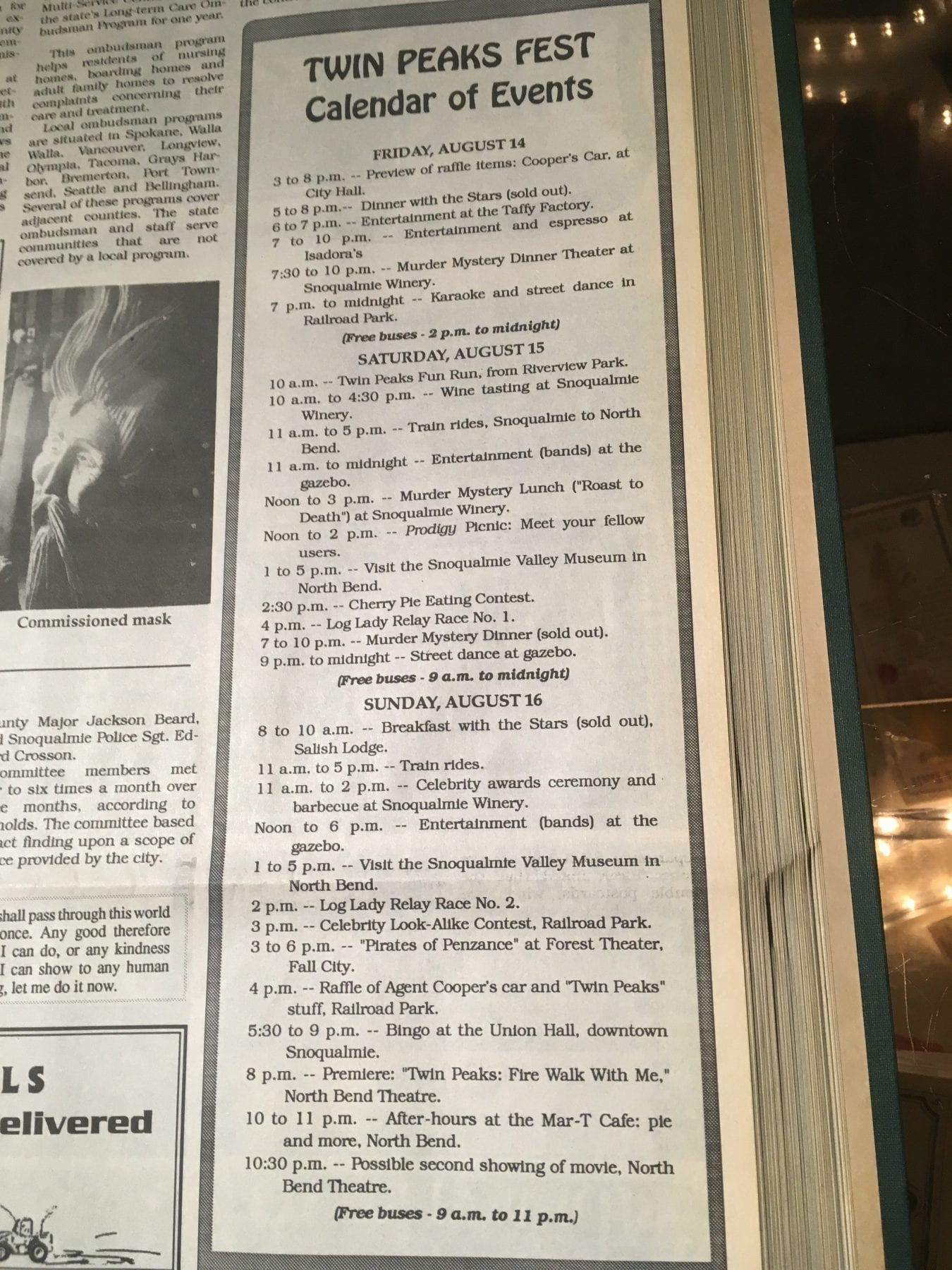 On a different page of the issue, there’s a double truck ad by local businesses supporting the 1992 Fest. With several antiques and/or collectibles shops promoting their stocks of fully-documented props for sale, one gets the impression this was a boon for fans looking to acquire a piece of the series to bring home and enjoy. Other ads give brief descriptions of Twin Peaks items designed and created by local artists and craftspeople, and I’m personally keen to know more about what people were making in response to the series since that’s much less well documented than the official merchandise that’s been produced since the series took off. (Anyone with images or knowledge of this, please share if you’re willing and able). 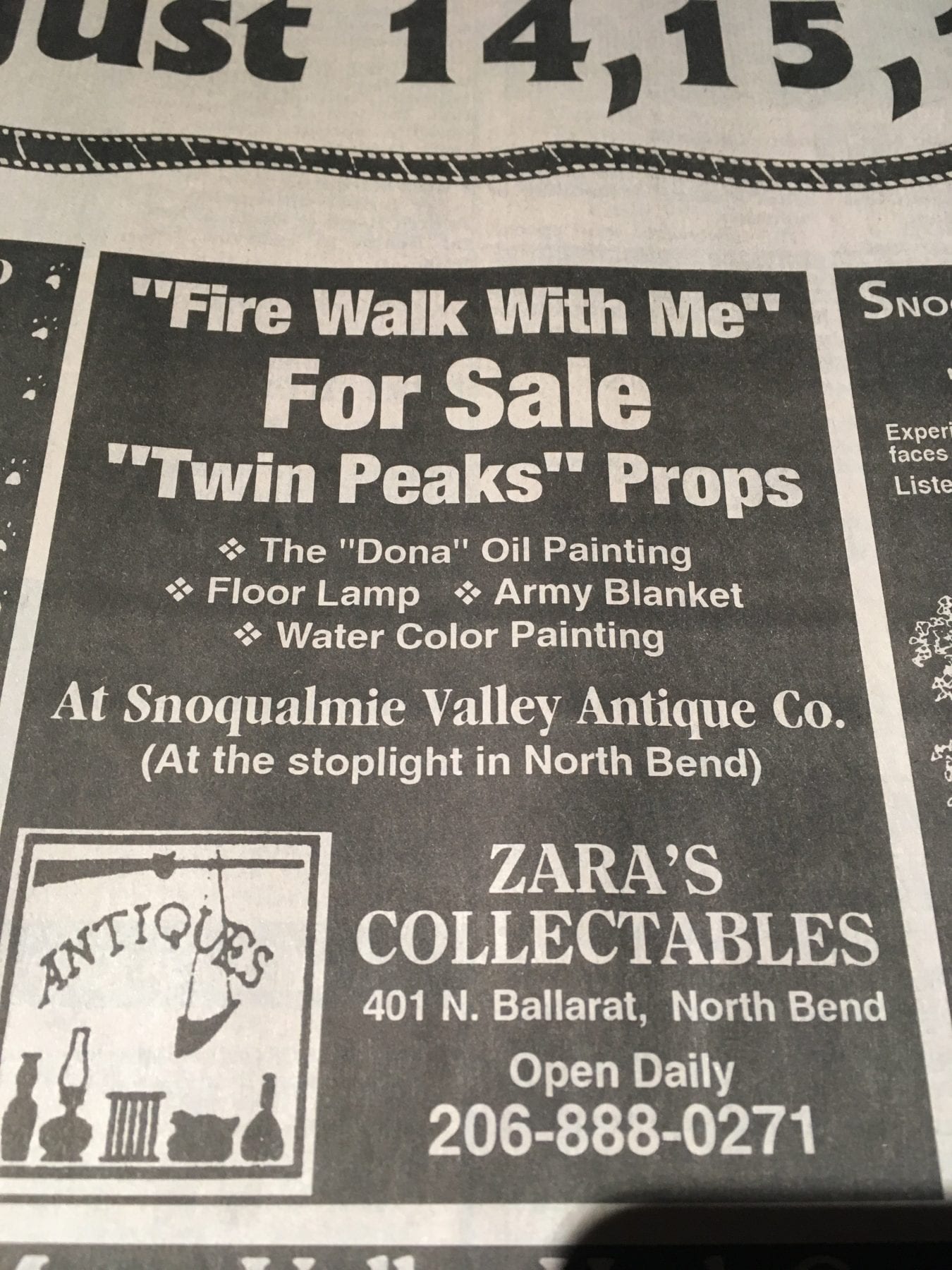 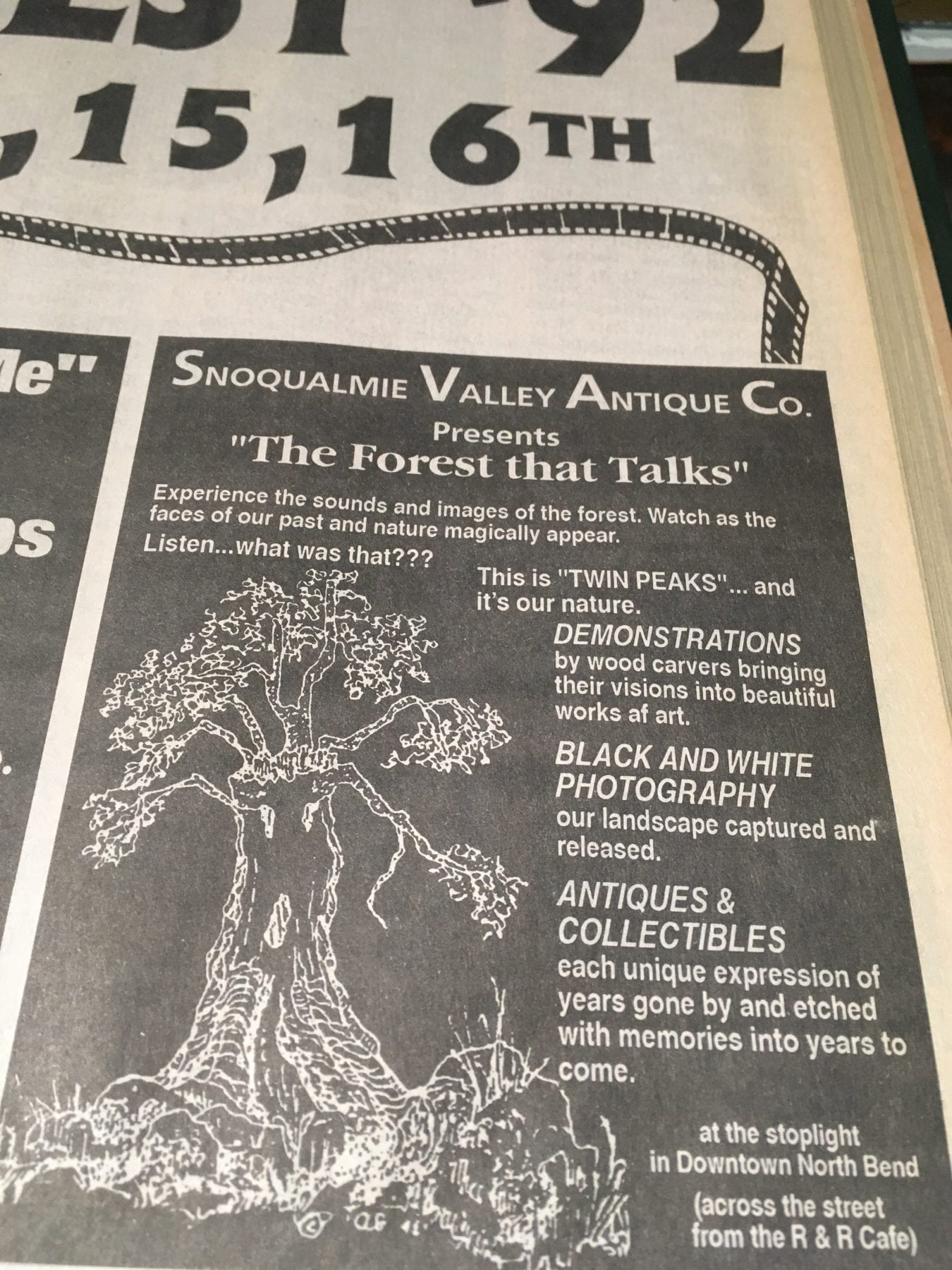 Finally, the one other Twin Peaks item in this issue is a story called “Cherry pie alive and well in Japanese village.” The story originated with a Fall City resident’s trip to Japan and the newspaper they brought back. According to the paper acquired in Japan, the small village of Maetsue on the island of Kyushu had teamed up with the regional railroad company to promote tourism by claiming that the village was a lot like the fictional town of Twin Peaks. According to that news story, a confectioner had started selling cherry pies, and outside the village was a replica sign from the opening credits of Twin Peaks with the slogan “Welcome to Twen Peaks.” The Japanese reporter stated that the misspelling was intended as a joke.

The appearance of this story aligns with the truism that Twin Peaks held great cultural currency in Japan in the early 1990s. The story also resonates with the Georgia Coffee commercials that David Lynch made for the Japanese market—both indicate the degree to which Twin Peaks was art deeply embedded in the industry of television, including its global integrations. And the misspelling presents us with an intriguing linguistic self-parody that connects fan devotion to the series with marketing messaging and the ethics of intercultural media representations. What might this story contribute to analysis of, for example, Catherine Martell’s posing as Mr. Tojamura?