In the 2019 critical anthology The Politics of Twin Peaks, editors Amanda DiPaolo and Jamie Gillies indicate that, within the breadth of analytical discussions and publications that exists around Twin Peaks, there is little to no explication of the undercurrent of theoretical politics that is represented emphatically throughout the series. In this anthology, DiPaolo, Gillies, and ten other academic contributors set out to demonstrate the intellectual value of Twin Peaks beyond its already well-explored cultural impact by delving into its representations of contemporary American political landscapes, identities, and ideologies.

We conclude that Twin Peaks is the rare cultural landmark in both film and television whose timelessness is defined by the fact that it can constantly be reinterpreted. Yes, even using a political lens. That quality has made Twin Peaks a cultural standard. [1]

If you are, like me, a Twin Peaks fanatic who relishes in the critical analysis of film, television, culture, and society, then this is the monograph you’ve been waiting for. The Politics of Twin Peaks was published in February 2019 by Rowman & Littlefield as part of the publisher’s Politics, Literature, & Film series. Rowman & Littlefield has published 40 monographs in this series since 2016, and their stated goal for the series is to focus on the intersection of politics within literature and/or film. 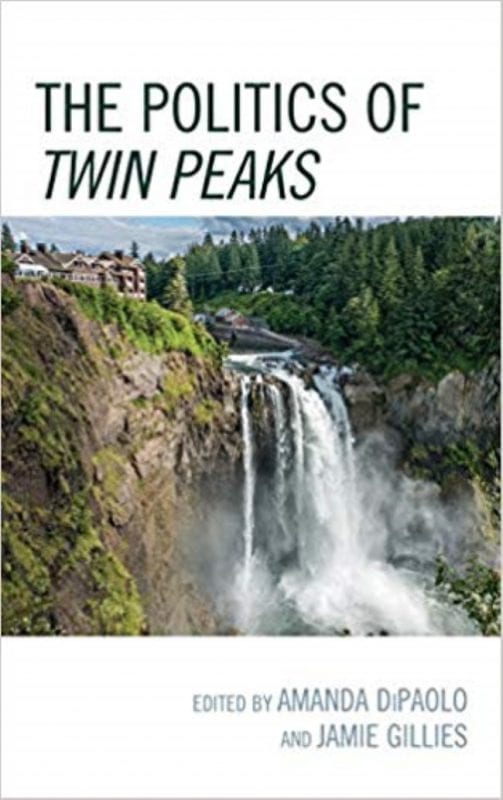 Because Rowman & Littlefield’s Politics, Literature & Film series places television shows like Twin Peaks, Mad Men, and Game of Thrones alongside some of the greats in literature and film, such as John Milton, Henry David Thoreau, Jorge Luis Borges, and the Coen brothers, it exemplifies the relatively new concept that television shows can be canonical. This concept reverberates in Martha Nochimson’s book Television Rewired, in which Nochimson argues that Twin Peaks played a revolutionary role in developing the capacity for television series to produce auteurs.

The academic accreditation of the editors and contributors to The Politics of Twin Peaks alone serves as an indicator of the emergent critical legitimacy of television as a topic of inquiry within scholarly circles. DiPaolo is Associate Professor of Human Rights at St. Thomas University, and Gillies is Associate Professor of Communications and Public Policy at the same institution. The book’s other 10 contributors are also academics from various disciplines, including film and television studies, philosophy, communications, public policy, language, literature, and visual studies. In effect, the book is a testament to the interdisciplinary value of Twin Peaks and shows like it in academia.

Following the introduction, The Politics of Twin Peaks is conceptually divided into four parts that correspond to broader categories of political philosophy. Each of the book’s four parts contains two to three chapters by one or more contributors for a total of nine essays. The essays are all well-cited with references to other critical monographs, various works and news sources about Twin Peaks (including 25YL’s Twin Peaks Theories & Analysis), noteworthy academic journals, and prominent theorists like Mikhail Bakhtin, Slavoj Žižek, bell hooks, and Tania Modleski. Check out the Further Reading list at the bottom of this article for a list of featured monographs cited by the contributors throughout to get a feel for the breadth of the work’s interdisciplinary coverage.

The book is replete with a brief but incisive index that tabulates instances of specific Twin Peaks characters and episodes as well as concepts and people relevant to political philosophy. Important concepts highlighted by the index include (among others) capitalism, conservatism, consumerism, feminism, gender roles, heteronormativity, identity politics, liberalism, male gaze, neoliberalism, nostalgia, parody, postmodernism, queer theory, socioeconomics, trauma, violence, and the working class. Important theorists and politicians indexed in the book include Michel Foucault, Sigmund Freud, Søren Kierkegaard, Barack Obama, Ronald Reagan, Bernie Sanders, and Donald Trump. This overview of key concepts and people that prefigure any single essay by their association with the book’s overarching premise should give you an idea of the scope of engagement with political theory in the anthology.

Before I briefly examine the book’s four conceptually divided parts, I’d like to list the titles of each part as they appear in the Table of Contents so you can ruminate over them for yourself:

By being purposefully non-political, Lynch accentuates the political because he does not use it as a blunt object or as an ideological or philosophical device […] he challenges audiences to interpret his films for themselves. [2]

In the introduction, editors DiPaolo and Gillies underscore the eventual consensus among contributing writers that, in Twin Peaks and in his other works, David Lynch tends to represent political issues through an analytical lens while, paradoxically, always avoiding direct commentary on political issues. This indirect method of all-encompassing theoretical representation is enveloped into the organizational structure of The Politics of Twin Peaks, whose parts explore broad patterns of political themes in Twin Peaks through close analysis of the series. 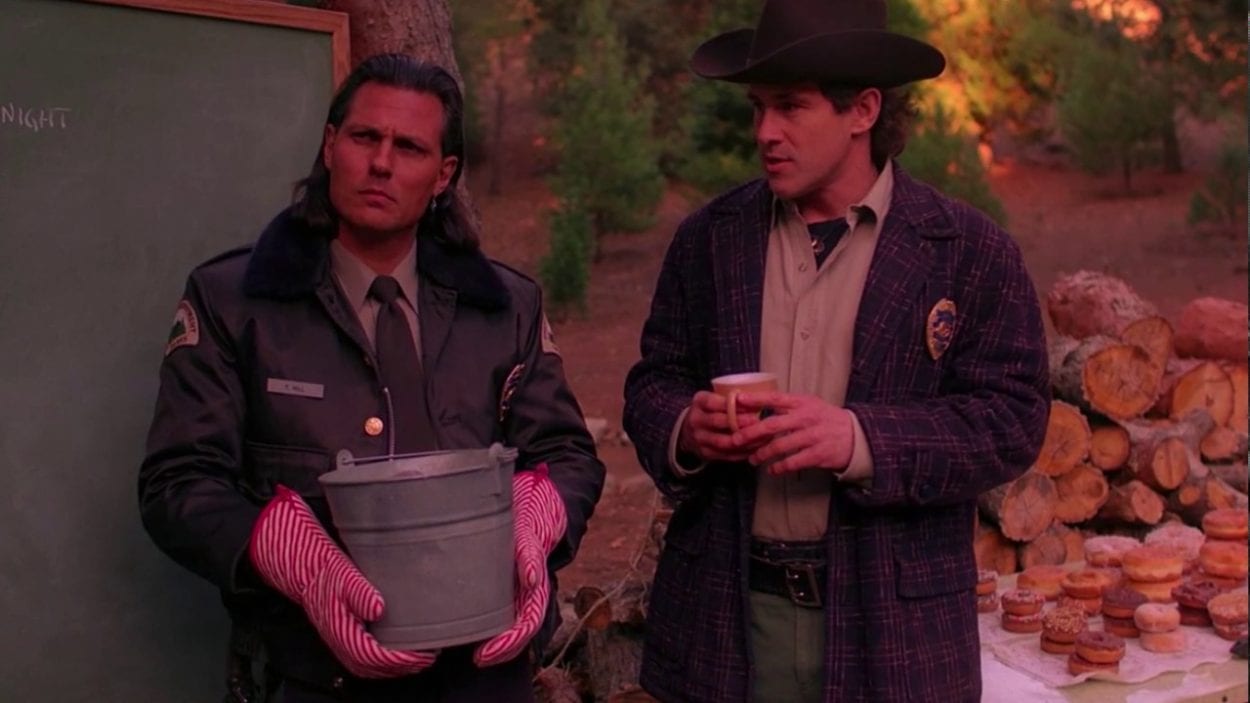 Part I of the book examines the use of nostalgia as a political tool in America and contextualizes it within Lynch’s deliberate (or unconscious) uses of conservative nostalgia throughout the series. Part II traces the political commentary of Twin Peaks throughout its seasons by discussing its associations with economic attitudes before and after the destabilizing 2008 crash of the housing market and by probing the Kierkegaardian irony of Lynchian comedy. Part III surveys some aspects of identity theory and representation in Twin Peaks, specifically through the lenses of third-wave feminism and queer theory. Part IV hearkens to ancient Chinese and Greek traditions in the history of political philosophy through explication of Twin Peaks’s resonance with Daoism and with Plato’s theory of recollection.

A common point of writers’ explication throughout The Politics of Twin Peaks is to put various issues that are represented in The Return in conversation with the destabilizing elements of rapid societal change in the American political landscape. This book is approachable both for readers who would find the broad categories of political philosophy that its sections explore appealing and for readers with a sense of curiosity about how Twin Peaks can be considered political. All the writers’ arguments are grounded in close analysis of specific episodes and sequences from Twin Peaks, which makes their chapters engaging to read.