Going back and listening to the audio recording of my phone interview with actress Nicole LaLiberte (who played Darya in Parts 1 & 2 of Twin Peaks: The Return) my biggest takeaway was laughter. We laughed a lot during our 20-minute conversation. During my initial listen, post-interview, I was mortified. Did I come across as unprofessional? How am I going to transcribe this into a worthwhile piece after Nicole and her extremely helpful publicist Devin arranged this time for us to speak? I needed to remove myself from my initial feelings to find the story, and during my second listen, it hit me: that was the story. Yes, we talked about Twin Peaks, her experience working with David Lynch (“He’s a master”) but the conversation was very genuine, very inspiring and yes, very funny.

We exchanged our pleasantries and discussed, of all things, weather for several minutes. Nicole grew up on the East Coast, in upstate New York and then lived in London for a few years as a teenager where she said she fulfilled her “gloom quotient” weather wise and talked about living in Los Angeles these days. “Living in LA, I miss the weather. I miss thunderstorms and a good torrential downpour.” As I talked about being a Midwestern guy who is used to experiencing all four seasons in one day, two things crossed my mind. First, I really wanted to be in LA to escape the Cincinnati “doom and gloom” weather we were experiencing and second, I remembered David Lynch on his website from the early 2000’s doing weather reports and thinking that he would totally approve of how this interview was starting.

I asked Nicole how she learned of the role, and she told me her manager set up an interview “which is not an audition, but it’s an audition” Nicole said with longtime David Lynch casting director Johanna Ray and her assistant. At the beginning of the interview, Ray informed Nicole that despite David Lynch not being there, they were going to pretend like he was and said that with a “mischievous grin” Nicole fondly recalled, giving us both a good laugh. About five minutes into the ten-minute interview, Nicole said she “was able to connect to the presence of Lynch” and also made a choice to not talk about acting. Instead, she told Johanna Ray about her passion project, which is to interview writers, artists and human beings that inspire her. While I didn’t share this with Nicole, I couldn’t help but smile: that was also an interest of mine and was something I was doing before this site launched. It would take a month after her interview for Nicole to learn that she was being considered for a role on the show. A month after that, Nicole was leaving a retreat at a Buddhist monastery two and a half hours east of Big Sur when she was told that she was likely to land a role. It would take another month to finally learn that she would indeed be on the show. “I was in a parking lot at night, near the sea just south of Venice and had just finished filming another project when I got that call”. “I was jumping up and down outside my car, alone, on the phone with my manager. It was just so thrilling”. 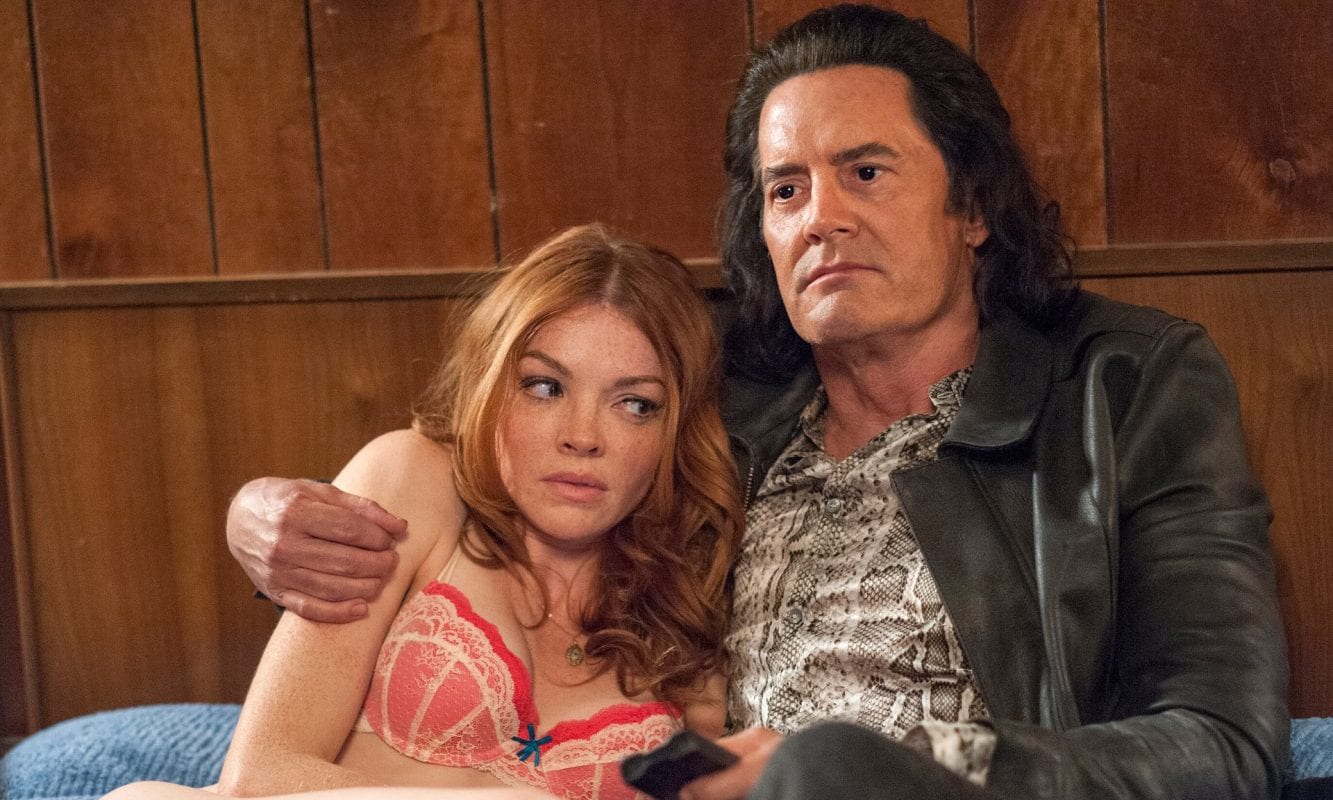 Our conversation shifted to what it was like working with David Lynch. “Transformative. Playful. Deep. Quiet. Very very still. There’s a stillness about David.” Nicole went on to describe how she felt that stillness throughout the entire set and “he [Lynch] knew exactly when to say something and when to just let things be. He’s a total master” she said. “It seemed to me that he knew exactly how to interact with me, a wild stallion. He’s very good at taming wild stallions.” She continued “I felt freedom and supported at the same time and that’s the kind of experience and quality of work that makes you want to keep going.” We started talking about the secrecy that surrounded this project and how much fun it was for her to keep those secrets. “People know a little bit. They know its David Lynch. They know its Twin Peaks, and they know you can’t say anything. That was a lot of fun”. I asked her about filming the death scene of her character and how she as an actress prepared for something like that. “I got my scenes about a week before filming and I learned my lines to the best of my ability. On the set, he makes everything a little more clear. Then you just have to throw yourself into it”. 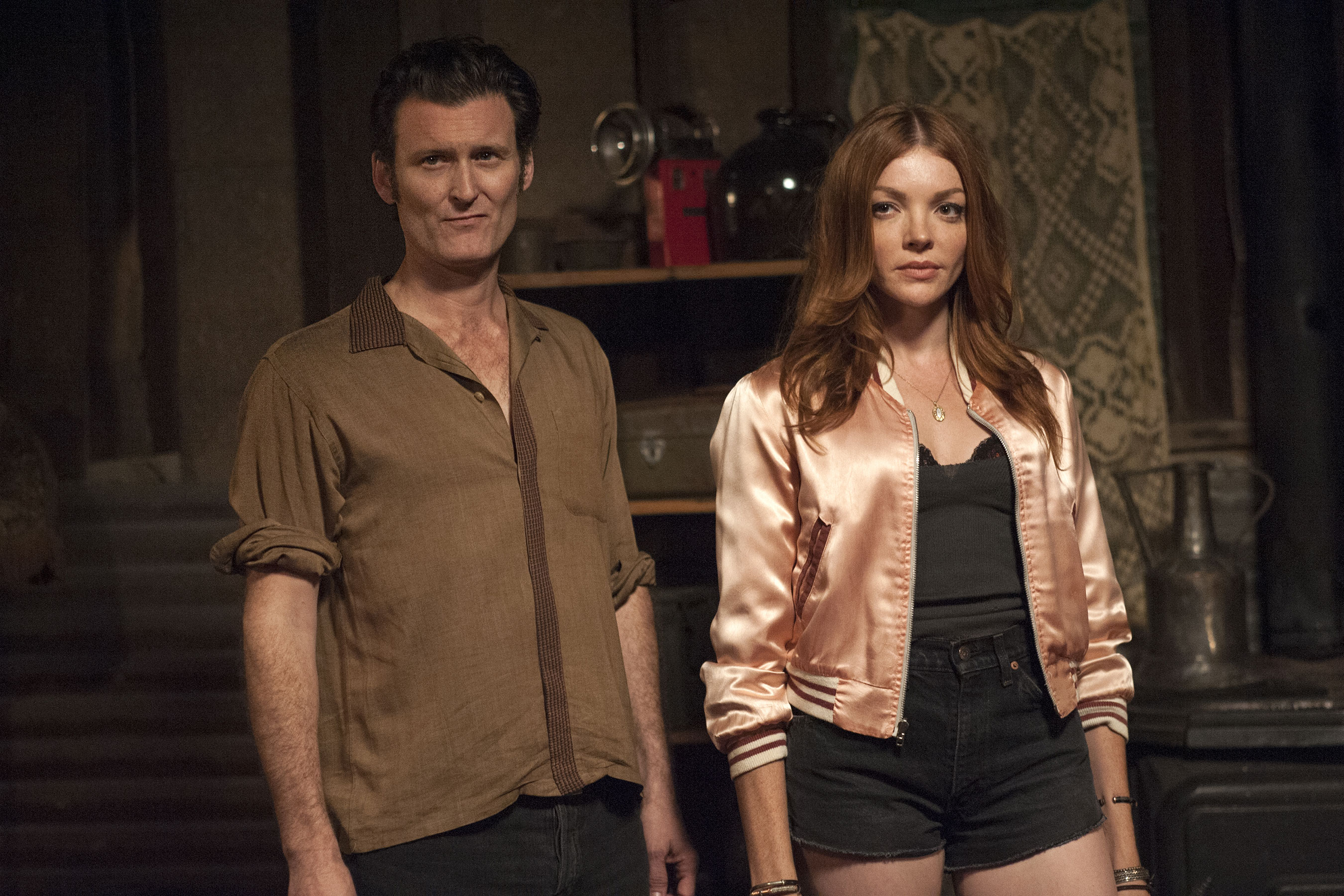 In perhaps my favorite part of our conversation, we joked about the kind of questions that people would want me to ask that she obviously would not be able to answer due to the show’s level of secrecy and talked about we could do a follow up interview after Twin Peaks: The Return had concluded where I would ask all of those questions and she would answer them for the Twin Peaks fans—whom she was highly complimentary of. She said she was on Instagram and Twitter, although she was not a regular social media user. “I didn’t really use Twitter until Twin Peaks. I’m still new to it. It’s the dialogue of the modern world. It’s a whole new dimension.”

Nicole will be appearing on the new Showtime series “I’m Dying Up Here”, although she was unable to talk about it any further because her character has yet to debut and she’s also preparing to start work on an independent film. We shifted back to the passion project she spoke of earlier and how she collects the interviews she conducts and puts them in a bi-annual magazine. The project is called “The Arsonist”, which is based on a quote from an American Zen master. Listening to Nicole describe this project, it was absolutely apparent how important and personal it is to her. When she called it a passion project, that wasn’t just a catchphrase: the passion was evident in her voice much the same as when she described her experiences filming and the feelings behind that. That level of passion and genuine emotion for her art makes her a really easy person for me to champion and support wherever her creative talents take her.

I hope you enjoyed this interview! Again, you can find Nicole on both Twitter and Instagram and be sure to watch out for her in the new Showtime original series, “I’m Dying Up Here”. Thanks for reading.