Let’s go back to the last episode of season 2, Beyond Life and Death, that aired on June 10, 1991. While standing in front of the drawing of the Owl Cave map, Sheriff Truman mentions Glastonberry Grove – a place in the Ghostwood forest with twelve sycamore trees standing in a circle. Cooper thinks for a second, snaps his fingers and says: ”The legendary burial place of King Arthur. Glastonbury!”

Since that moment we’ve had a Kind Arthur reference in Twin Peaks. The second season ended that night in 1991, but as we all know the Twin Peaks saga wasn’t over yet. In season 3 The Return, the legend of King Arthur has been popping up again – and again. Many have noticed, some might not have, and the rest is history. Literally.

The legend of King Arthur is a whole mythology in itself, and when it comes to history it’s a tricky story. It’s not even been proven that the king ever existed. Real or not, half-truths or just pure legend – references to King Arthur in Twin Peaks have been growing in number to the point that it’s about time to take a closer look.

In this article I will list all references to the King Arthur legend that I have found, both visual and outspoken. Some of them are indisputable, and some are clearly my own interpretations. I will give a short historical context for each reference as well as make my own, subjective interpretations on how the King Arthur legends might be further tied into the Twin Peaks mythology and story.

THE LEGEND
King Arthur is said to have lived during the 5th and 6th centuries AD. Arthur was magically conceived in Merlin’s Bay, and Merlin fostered Arthur when his parents died shortly thereafter. Not a king by birth, but a knight and a leader, the legend of the sword in the stone is what made him king of the Britons. It’s said that the one who would pull a sword stuck in a stone would become the true king. Many tried but only Arthur succeeded. It’s said that his mind was ”without fear” when he did this. And so he came to claim the throne of Britain.

Arthur’s castle was called Camelot, and in it’s biggest hall stood a huge round table around which King Arthur’s fellow knights sat along with Merlin and Guinevere, Arthur’s queen. The number of knights vary, but most stories tell of twelve. One of the most famous of these knights were Sir Lancelot. King Arthur and his knights of the round table fought many wars against the Anglo-Saxons to defend the kingdom of the Britons.

The second sword in the King Arthur Legend is the Excalibur – an extraordinary sword that was given to Arthur by The Lady of the Lake, who was a water spirit, after the advice of the wizard Merlin. King Arthur died after his own nephew Mordred had stolen the Excalibur and fatally wounded him – but before his death Arthur managed to kill Mordred as well.

King Arthur’s body was put on a boat and sailed to the island Avalon to be buried. However, many myths tell that he never actually died, but is sleeping in a secret cave, awaiting the times when the Britons once again will need him. It’s said that if you stand by the cave entrance at a certain moment in time, it will open up to reveal to you the sleeping King Arthur inside. This is why King Arthur is also called ”the once and future king”.

Now, let’s take a look at Twin Peaks and the legend of King Arthur.

THE EXCALIBUR
In part 11 of Twin Peaks: The Return, Agent Cooper is driven in a limousine to meet up with the Mitchum brothers. For a short moment his eyes are caught by a big sign with the words Excalibur on top. The sign also shows a sword and two castle towers – twin peaks if you’d like. Is this yet another subtle sign (no pun intended) that Agent Cooper remembers the King Arthur references from his ”former life”. Or maybe it’s a reminder that he metaphorically must find his way back, take power and claim control over his own self, his ”inner king”? 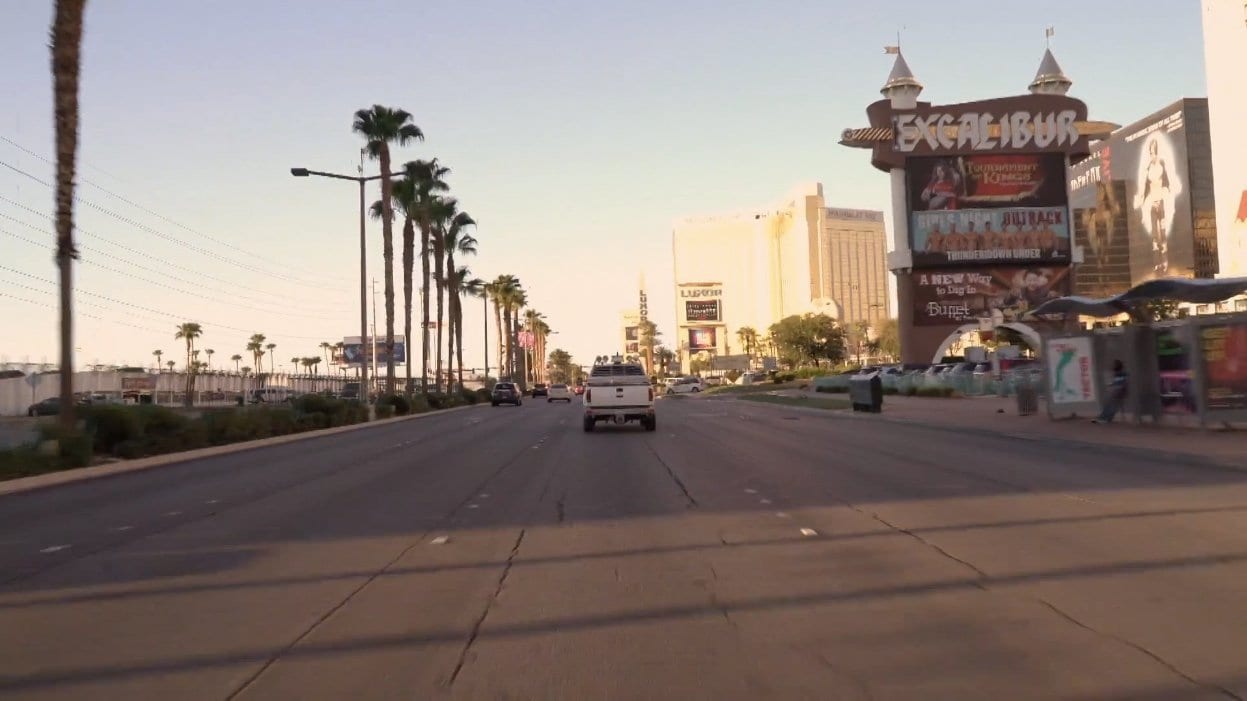 GLASTONBURY AND GLASTONBERRY GROVE
”The legendary burial place of King Arthur” is said to have been the island of Avalon. Later historians and archaeologists have studied old maps and the surroundings and many believe Avalon to be Glastonbury Tor in Somerset, Great Britain. (Yes Pete, you were right about that one.) The king’s remains have never been found, but in the year 1190 the monks at Glastonbury Abbey claimed that they had found the remains of King Arthur and his queen Guinevere buried inside a big carved-out oaken log (!) coffin. The remains were later lost, but at the spot to where the monks allegedly moved the remains a sign still stands telling about the story.

Apart from the name, there are other things I believe connects Twin Peaks’ Glastonberry Grove to the legends of King Arthur. Twelve sycamore trees standing in a circle clearly connects to the twelve knights around the round table. The Twin Peaks portal to the Black Lodge is open at a certain time only – just as the King Arthur legend about the cave where he sleeps and awaits his return. It can possibly also be argued that the legend of the sleeping King Arthur fits into the fact that Agent Cooper was stuck in the Black Lodge for 25 years, waiting for his time to once reappear.

Lastly, and I know this might be a stretch: The year 1190 mentioned above – and ”119” as repeated by the drugged-out mother in Las Vegas. At least I couldn’t help noticing anyway.

LANCELOT, GUINEVERE AND LANCELOT COURT
In Twin Peaks: The Return, Agent Cooper ends up living as Dougie Jones on Lancelot Court, Las Vegas. Lancelot was one of King Arthur’s most famous knights and his best friend – until the big betrayal, that is. Sir Lancelot had an affair with Guinevere, King Arthur’s wife and queen. The discovery of this adultery caused a civil war in the kingdom. The uproar was taken advantage of by Arthur’s nephew Mordred, who later caused the death of not only the king, but the kingdom as well. 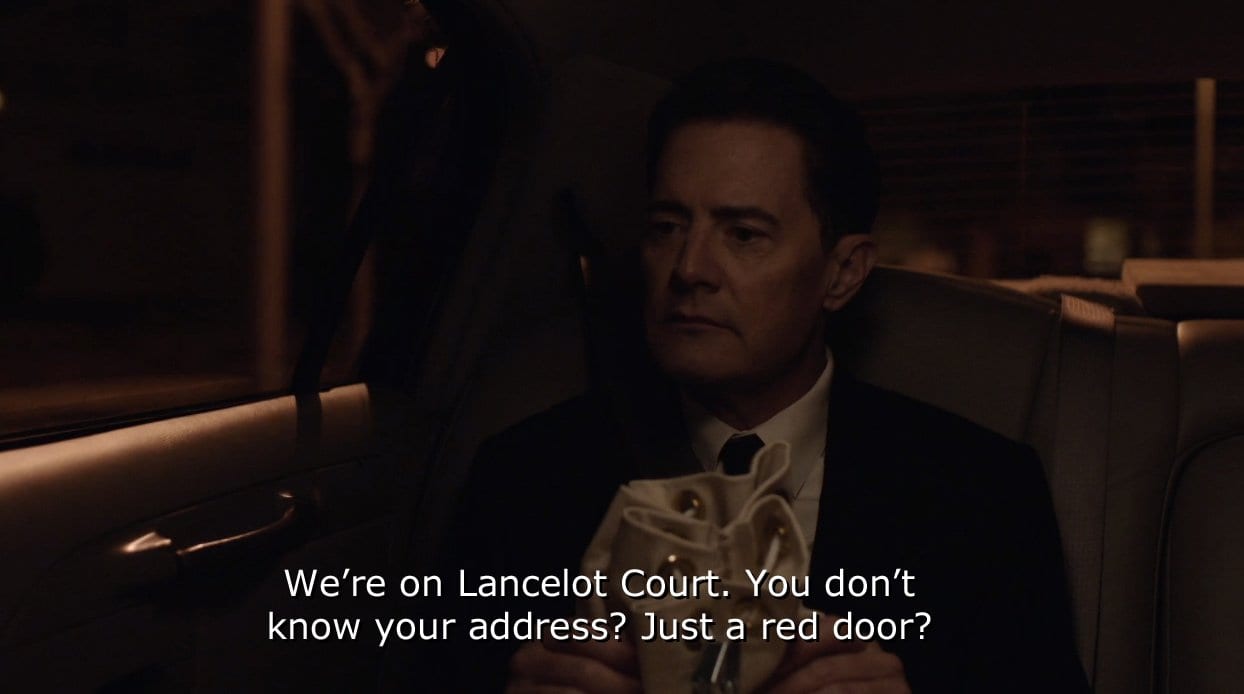 Sir Lancelot is connected to the famous legend of the search for the Holy Grail. One might argue that Agent Cooper is on his own quest for the most important artifact of all – his own identity.

Agent Cooper, believed to be Dougie, is practically living in another man’s house with another man’s wife and son. Will there be chaos and uproar when or if Dougie Jones is exposed as really being Agent Dale Cooper?

MERLIN, GUINEVERE AND MERLIN PARK
The wizard Merlin was the mentor and aid to King Arthur. But before Arthur was born, his mother, queen Igraine, was in love with another man than her husband who was king Uther Pendragon. To prevent the unlawful affair, Uther Pendragon kept his queen Igraine locked up in a castle. The yearning couple got help from Merlin the wizard who made a magical potion for the suitor to drink. This potion made him look like Uther Pendragon himself, and it allowed him to enter the castle to visit queen Igraine. This is how Arthur was conceived.

It is also said that Merlin built the Stonehenge with the help of a giant. He’s got the ability to shapeshift and is connected to the Holy Grail.

In Twin Peaks, the corner of Merlin Park and Guinevere, Las Vegas is where Janey-E meets up with the thugs who are blackmailing Dougie Jones to give them the money Dougie owns them (at least part of it). The money is part of what Agent Cooper wins at the Silver Mustang casino, seemingly with the help from the floating images of the Black Lodge above the slot machines. 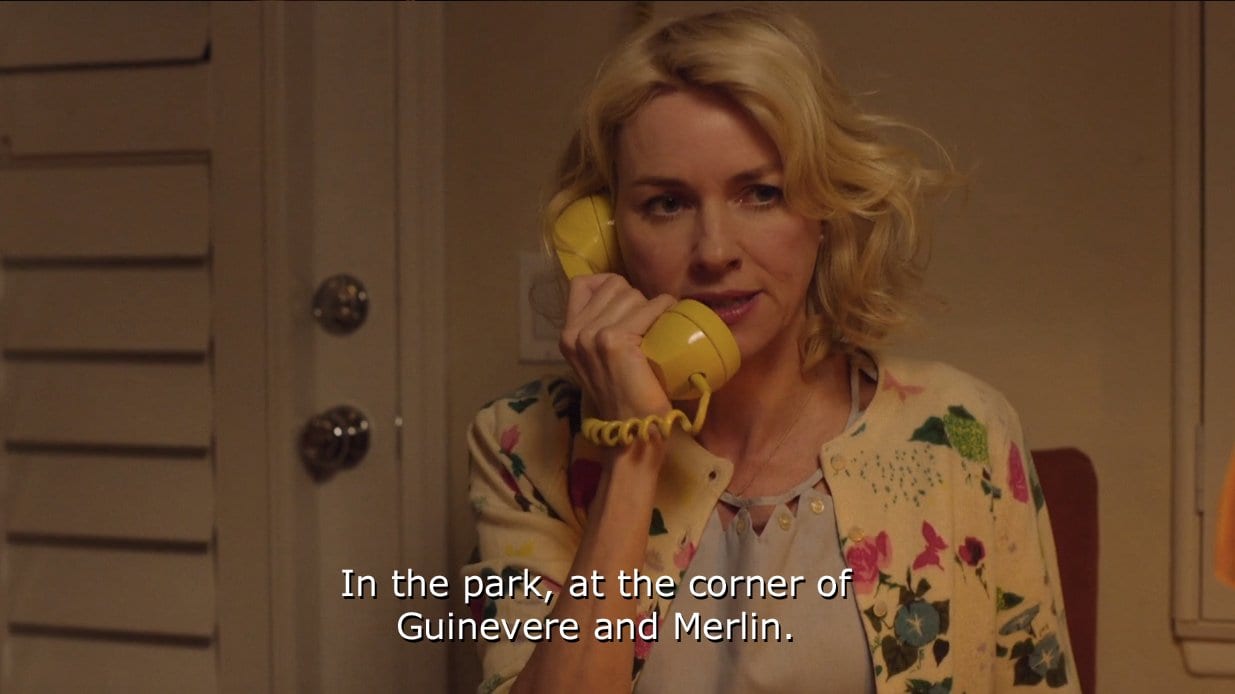 The one-armed man Mike has helped Cooper several times to guide him to the right decisions – he’s a kind of a Merlin to King Arthur from the legends. I also find it interesting that Merlin is associated with a giant, just as Mike in Twin Peaks. And then there is of course the case of the ”doppelgänger” in both mythologies, for good and bad, I suppose.

OTHER REFERENCES AND CONNECTIONS
Thinking about the legend of King Arthur have made some other Twin Peaks events and visuals stick with me as well, even though they are not as directly connected as the above ones. I leave it up to the reader to decide the relevance of each reference that came to my mind. 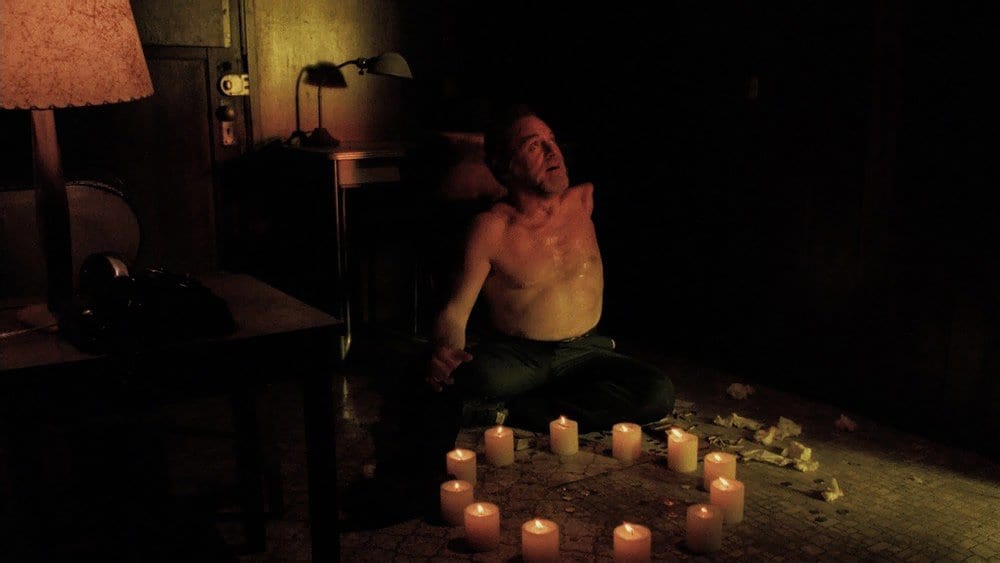 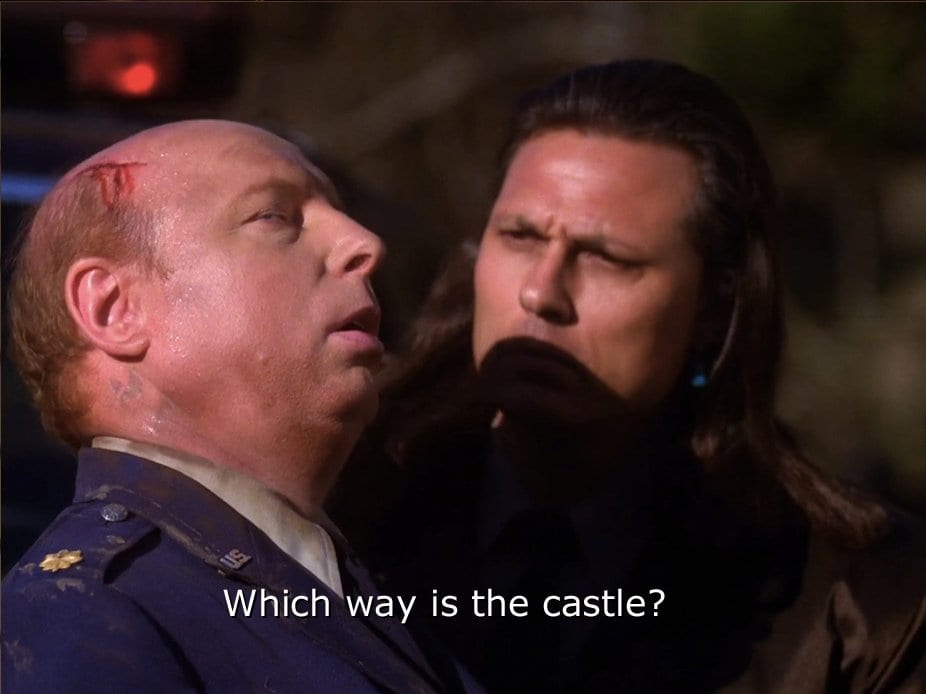 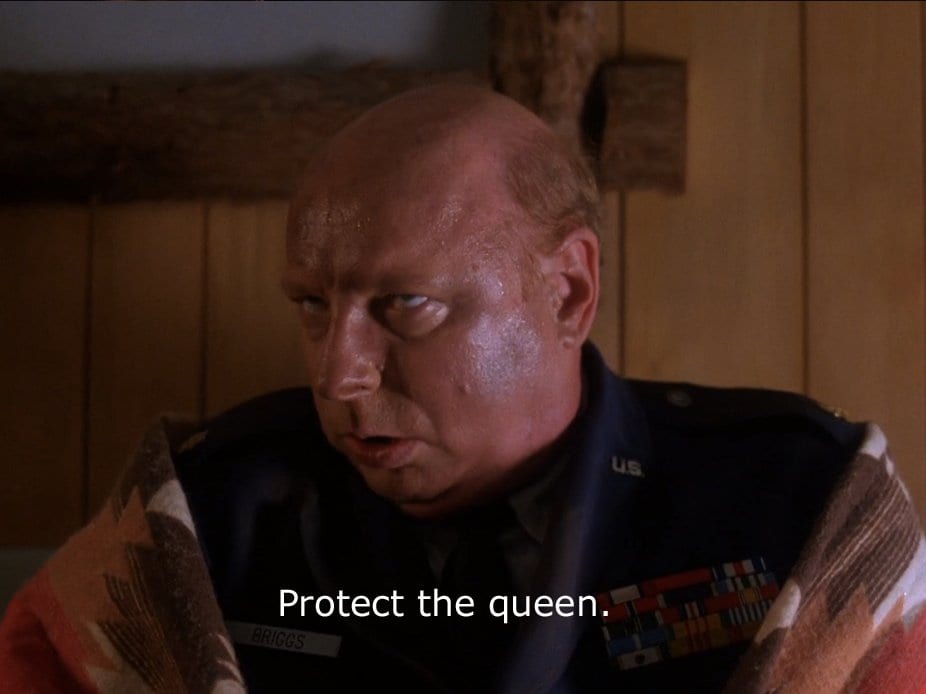 A SILVER SWORD
Finally, there’s an interesting reference to the legend of King Arthur hidden in the original script to the last episode of season 2. The script was clearly not followed but changed for the final product. But here’s what originally was intended for the part when Sheriff Truman is waiting by Glastonberry Grove for Agent Cooper to reappear from the Black Lodge:

”Near the center of the grove the air seem to shift shape, move and alter.
Truman stands, moves closer.
A GLEAMING WHITE SHIELD appears in the oscillating air and from behind it a hand holding a SILVER SWORD.
Truman is mesmerized.
He now sees that holding the shield and sword is a tall, dark WOMAN, wearing a glittering chain mail. She sees Truman, holds the sword out towards him.”

The reference to the myth about The Lady of the Lake giving the Excalibur sword to King Arthur couldn’t have been much clearer.

I hope you enjoyed this article!