Please note: Before turning this once-Facebook-post into an article I have added a few lines and text here and there to make things clearer. This post was last updated on June 22 2017.

OK friends, are you ready? This is gonna be a long post about alchemy and Twin Peaks. I really appreciate everybody who takes their time to read. I’m promising you it will be interesting, and it might even shed some new light on your Twin Peaks experience.

These are my thoughts and theories about how alchemy ties into Twin Peaks and what alchemy can possibly say about what’s going on right now.

This post will contain information (thus spoilers) up to season 3 episode 6, Fire Walk With Me and Mark Frost’s The Secret History of Twin Peaks.

If you have absolute no clue of what alchemy is, please educate yourself to the very basics for a better understanding!

Alchemy is today often misunderstood to be only about literally trying to make gold out of lesser metals. But it’s much more than that. I’ll focus here on the completer phenomena of alchemy where the philosophical and spiritual is just as important, if not even more so. I’ll be theorising around the alchemist’s urge to refine the being and soul and turn it into a higher, conscious being. This is a metaphor for turning a lesser metal to shiny gold – of the mind.

True alchemists never occupied themselves with only one of these sides, because true alchemy was always about them both. An alchemist who was only interested in literally making gold out of lesser metals did not have the true mindset, and was bound to fail.

So, whatever does this have to do with Twin Peaks? Let us begin with something we recognize very well:

1A. THE MAP TO THE BLACK LODGE
I will try to show you how the ”map” to the Black Lodge from season 2 is full of alchemical symbolism that can be interpreted in a very relevant way to the series. By doing this, it will hopefully become clear that alchemy isn’t something I took out of the blue. Alchemy is in fact rooted deeply in the Twin Peaks mythos.

What follows is my own drawing of this map with numbers. I’ll explain the alchemic meanings of, not all, but the most important symbols – and how I personally connect them to Twin Peaks. Please indulge yourself in my interpretation, but keep in mind this is what it is; my interpretation. So, let’s go: 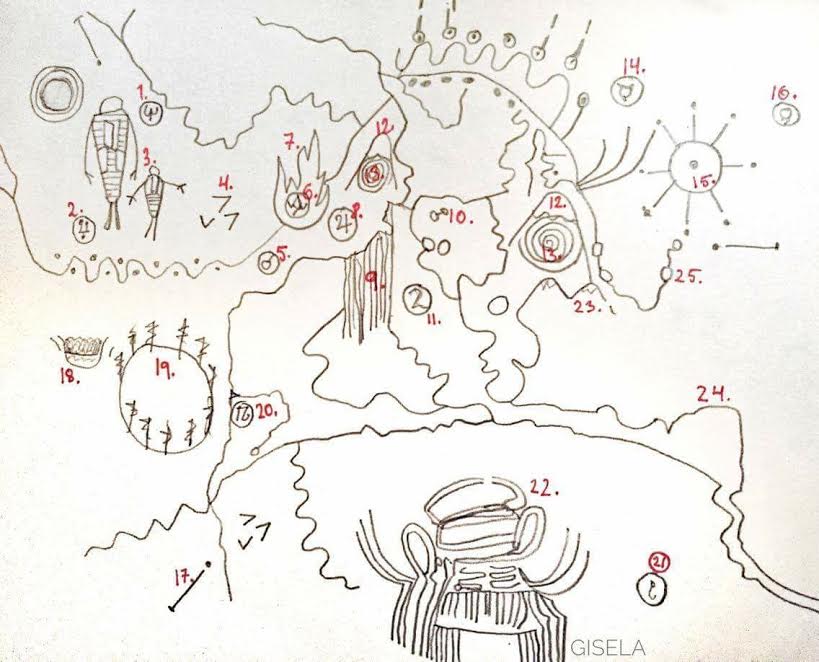 1B. LANDMARKS. (Non-alchemical, more like those on a conventional map.)

2A. TRANSFORMATION & TRANSMUTATION IN ALCHEMY
These are the seven steps in the alchemic process of metaphorically turning ones ”inner lesser metal” into ”gold”. It is, in other words, the path to enlightenment and spiritual perfection of the highest kind. I’ll explain why this is relevant to Twin Peaks after I give a short description of this alchemic process. Words written in italic are extra interesting in this analysis:

2B. THE PHILOSOPHER’S STONE & DOUGIE JONES
Total enlightenment is the alchemist’s goal. The Philosopher’s Stone is described as a golden essence, shining with bright light. This is what happens to Dougie Jones once he enters the Black Lodge:

We see Dougie transform. Like a mattering heated (step 1: Calcination) his body shrinks. His head literally goes up in smoke – and out of the blackness of the soul comes the lesser matter of lead. This blackened silvery lump then goes through yet another alchemic process or step. The gold – the highest metal of the spiritual soul – is extracted and the lesser matter is disintegrated.  This golden “pearl” is collected by The One Armed Man. It is the purest essence of Dougie Jones – his Philosopher’s Stone.

2C. THE PHILOSOPHER’S STONE & AGENT COOPER
Throughout season 1-2, Cooper is on a personal journey parallel to the ”worldly” police investigation work. He is meditating, reflecting and expresses to Diane how he gains insight into the fact that humanity uses only a fraction of its potential. He seems to aspire to constant, further enlightenment – just like the true alchemist would.

2D. TRANSFORMATION, STEP 5.
In the alchemy process of transmutation, step 5 (fermentation) is announced by a brilliant display of colors and visions. In The Secret History of Twin Peaks there are three examples of that could be descriptions of this stage:

3. FURTHER ON: THE FOUR ALCHEMICAL ELEMENTS

The four alchemic basic elements are ever present in Twin Peaks season 1-2. Here are a few examples:

3B. MORE ALCHEMICAL OBSERVATIONS IN SEASON 3

4. ALCHEMY IN THE SECRET HISTORY OF TWIN PEAKS

Here are a few examples of alchemy as mentioned in Mark Frost’s book.

5. AGENT COOPER’S TRANSFORMATION/TRANSMUTATION
Let’s apply the seven steps of the alchemy transmutation/transformation on what is happening to Cooper (in Dougie Jones’ life) so far in (season 3 episodes 1-6). Read through the seven steps again, now with the “good” Cooper’s journey in mind. He is on this path of slowly finding his way (back) to enlightenment… And maybe even beyond.

…I literally have tons of more stuff, but this has taken me long enough I think. Maybe I’ll save the rest for another post.

I would immensely appreciate your thoughts! And thanks for reading all the way to the end of this,  my first post for the 25 Years Later site.