25YL has gone stereo! We will be releasing audio versions of some of our articles, which will be exclusive content for our Patrons. Anyone who signs up to pledge $5 or $10 per month will have access to our exclusive audio articles, plus many other benefits. This is your chance to hear what we’re obsessing over lately in the world of Film, Horror, TV, Gaming, and Music.

Enjoy this deep dive into the world of Sarah Palmer in The Return with John Bernardy.

Dealing with PTSD has been a theme throughout The Return. Whether it’s Cooper somehow assuming Dougie’s life after being the Lodge’s prisoner for 25 years, Carl and the Log Lady dealing with life after being abducted at age seven, Frank and Doris Truman and their son, or even Mickey’s friend Linda the soldier who just got a new wheelchair from the government, the theme of PTSD keeps showing up. And Sarah Palmer’s story is no different.

Things that will trigger PTSD can be large or they can be small, and a new display at the grocery store where there wasn’t one can lead someone into a panic attack if they’ve been having trouble understanding what is real and what isn’t. Does the turkey jerky also inspire Sarah’s PTSD because of her dealings with Leland? The hosts of the Time For Cherry Pie and Coffee Podcast asked this question as well. Is beef jerky the only true jerky to Sarah and the turkey variety is an imposter? If the turkey jerky is a fake jerky, a doppelgänger jerky as the TFCP&C hosts playfully put it, the turkey version is abomination. It looks like jerky but something just under the surface is unnatural. It’s different and that’s a problem, because it’s those little differences you have to pay attention to, those little differences that show you whether you’re talking to your husband or a demon.

And was the turkey jerky strictly a reminder of Leland or is Sarah also in tune with something wider scoped? The “men coming” that she refers to could be woodsmen or it could be the convergences of everyone from DoppelCooper to Hutch and Chantal to Gordon and crew, even to Dougie and the Mitchums. There are a lot of other story arcs that need to be drawn to Twin Peaks and Sarah has had the sight since before she saw Jacoby’s glove reaching for the necklace in the Pilot. Diane Podcast’s declared her the Baba Yaga of Twin Peaks and wonders why her house isn’t up on chicken legs, so is Sarah having her panic attack because she’s seeing a frightening future?

And what exactly in the turkey jerky would’ve inspired Sarah’s sight anyway? It’s that line from Laura in Fire Walk With Me, about being “gone, long gone, like a turkey in the corn.” If you break that statement down into parts and equate each word’s in-show meanings, there’s a lot to equate.

Laura was the turkey. Corn is the garmonbozia. She went into the pain and suffering never to return. When Sarah asks “Is it smoked” this can easily be a connection to Laura being devoured by the flames, but take it literally one step any direction in a Wally Brando monologue and you get corn being fired in the same flames. I don’t think it’s a coincidence we see this scene exactly one Part after Hawk’s living map was introduced. If you put corn to flame, you get black fire, the worst kind of fire you can ask for. The turkey jerky could actually be a stand-in for the black fire, a symbol that it’s already here. It’s not a revelation to us viewers, just an illustration in another form. The black fire surrogate snuck in with zero notice onto a store shelf, just sitting there in the background. It blends right in, raising our temperature one degree at a time until the whole town—the whole world—is on fire. From the look of things, it’s been happening to Twin Peaks for quite some time, whether it’s to do with Sparkle or Richard Horne’s impulsive rage, Becky and Stephen’s fiery relationship, or even Jacoby’s raging Dr. Amp broadcasts talking about the people in charge not eating our food because it’s poison. The black fire has been burning, and it’s made enough inventory of metaphorical jerky for us to devour that it can be rolled out for (or more appropriately, to find) purchase.

Back to Laura’s quote, what else is there about being long gone? Laura herself may be. She’s gone in the sense she died, but maybe her spirit is now removed as well, from the whole town. Maybe she’d been trapped in the woods and maybe some lumber from the mill made its way down to South Dakota to renovate the Mayfair just like Pacific Northwest lumber was used to build Jack Parson’s Parsonage per The Secret History of Twin Peaks. Maybe Laura really is haunting Gordon Cole’s room like some of the stories at The Search For the Zone imply. Haunted lumber is a thing, just ask David Lynch about drawer pulls. Or Margaret about her log (but only when you’re ready to speak to it). 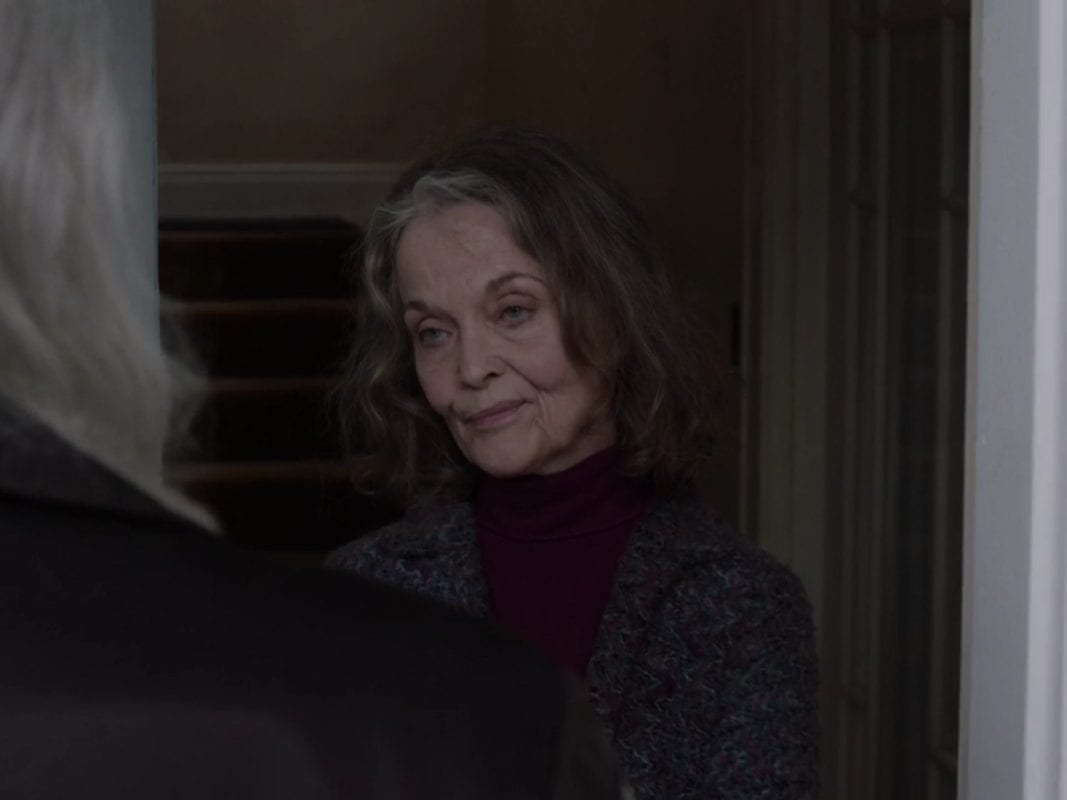 Later in Part 12 there’s the scene with a stronger, angrier Sarah (it’s those little differences you need to pay attention to) speaking to Hawk. He asks her “is somebody in the house?” and she answers “no, it’s just something in the kitchen.” The scene mirrors exactly in the Pilot when a grieving Sarah asks “Who’s upstairs?” and Harry tells her “Your husband, and one of my men.” That man was Hawk. It’s a mirror image rather than a full circle, but in both cases that ceiling fan is on, doing what it will with its electricity. This visual language, in a Part with a French woman doing her best Lil impression, is telling us something our instincts already understand.

And by the way, I don’t think it’s a coincidence that our eyes had to go through a window to look at that fan. At this year’s Twin Peaks Fest, Wendy Robie said it was because of us and our rabid fandom that Showtime knew it had a built-in audience and so greenlit Lynch and Frost to make their art. In a way, we are complicit in keeping Sarah where she’s been all these years, and for bringing that house back to life. For keeping the fire burning. 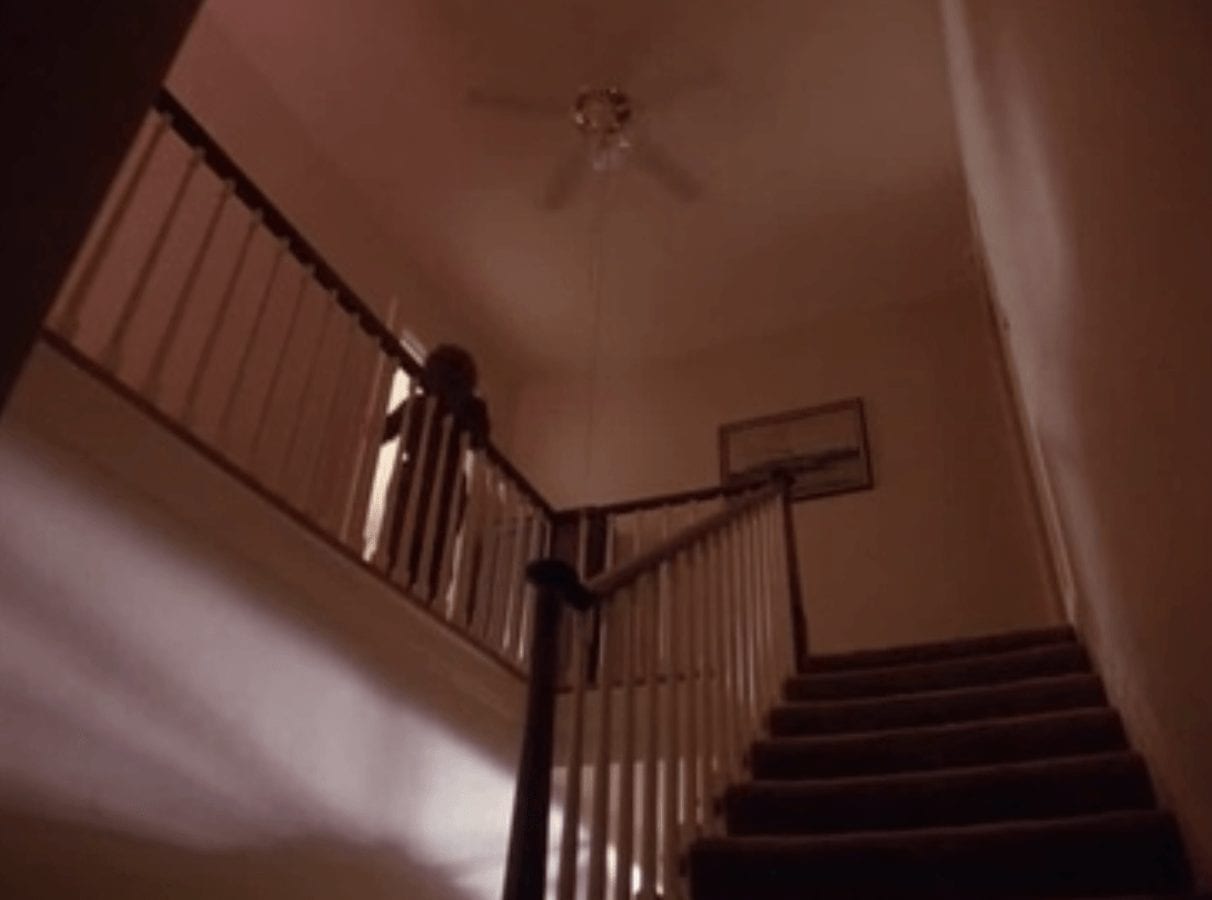