So, if you read my column last week, and you’ve watched the incredible, mystifying finale of The Return, then you’ll know I basically aced my prediction. Yep. I got every detail absolutely correct. Well, okay, not every detail. In fact, not a single thing I predicted came to pass. But right up until the last few seconds, I was convinced it would – it totally looked like Laura would return home to heal her mother and vanquish the evil forces that haunted her home town.

Coop was with me. He knew this healing was important too. He knew that Laura was the key to it all. He spent the entire last hour of the show trying to make it happen. It would have made perfect sense narratively, psychologically and supernaturally. But that’s not the resolution we got. It all unravelled at the last moment. Leaving us with…. Well what were we left with? What are we meant to make of the ending we were given? Here’s my hot take (and you can quote me): It was totally predictable. Yeah, you heard me. The ending to Twin Peaks: The Return was completely predictable.

Granted, I didn’t predict it. I don’t know anyone who did. But I do think, now we have the full picture, that there were enough clues to show us how this would go down! Please don’t misunderstand me – I do obviously have my tongue firmly in my cheek here – I’m not saying we should have known the specifics and I don’t mean “predictable” as a criticism in any way. This final double-bill was two of the most powerful hours of the most incredible show ever to be aired. But, the ending was definitely predictable.

Now, before I make a stab at backing up this audacious (and arguably stupid) statement, I want to take a moment to revel in the glory of having at least got one prophetic observation right – way back on August 1st, when I tweeted the following:

Imagine my glee when, early in Part 17, Cooper’s message to Cole was finally shared and included the words: “It is 2:53 in Las Vegas, and that adds up to a ten, the number of completion.”

BOOM! At this point, I took it as a good omen of the highest order. I was on a roll. This was a sign that my theory about Laura healing her mother (and thereby the world) was bound to come true. I had tuned into the clues and symbols of this intricately and brilliantly plotted series and followed it through to an ending. I went on believing that I was right until the moment the closing credits rolled. But I made a mistake. I ignored all the signs. I was so keen to believe what I wanted to believe, that I missed the signals telling me it was never going to pay off. 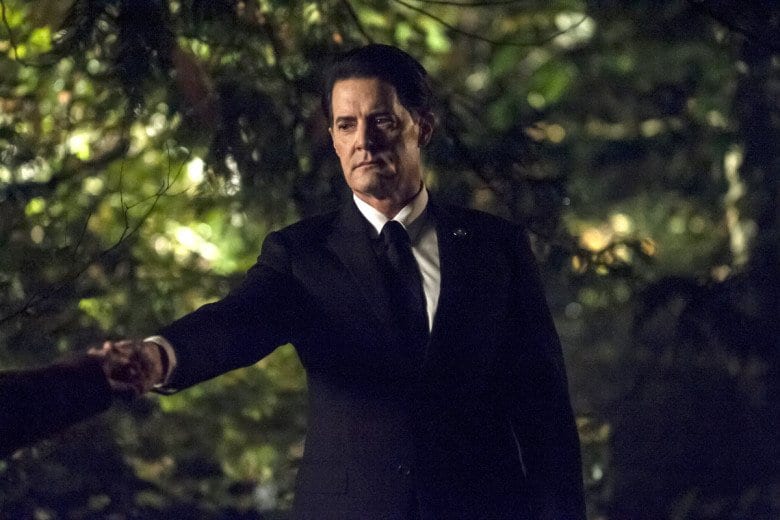 One big, red, obvious signpost that my ending was not where we were headed came in a scene towards the end of Part 17. Cooper, having gate-crashed the events of Fire Walk With Me in an apparent bid to change history, seemed to be leading Laura towards the gateway near Jack Rabbit’s Palace. But, in a blink, with a strange sound reminiscent of the one emanating from the Fireman’s phonograph, Laura was gone – replaced by a harrowing scream echoing through the trees.

Cooper was taking her to a point of resolution but the forces of the woods had other plans. This three-minute scene lays the blueprint for the entire final episode. In the last hour, he once again leads Laura towards a resolution and once again, that resolution slips like quicksilver between his fingers and out of reach at the last. The clues were there. I should have seen it coming. But I didn’t. Perhaps because I didn’t want to see it. I had a vision for how this should play out, and I stayed latched on to that vision. I was so fixated on the golden glow of my imagined ending, I couldn’t see the pitch-black absence that awaited me. 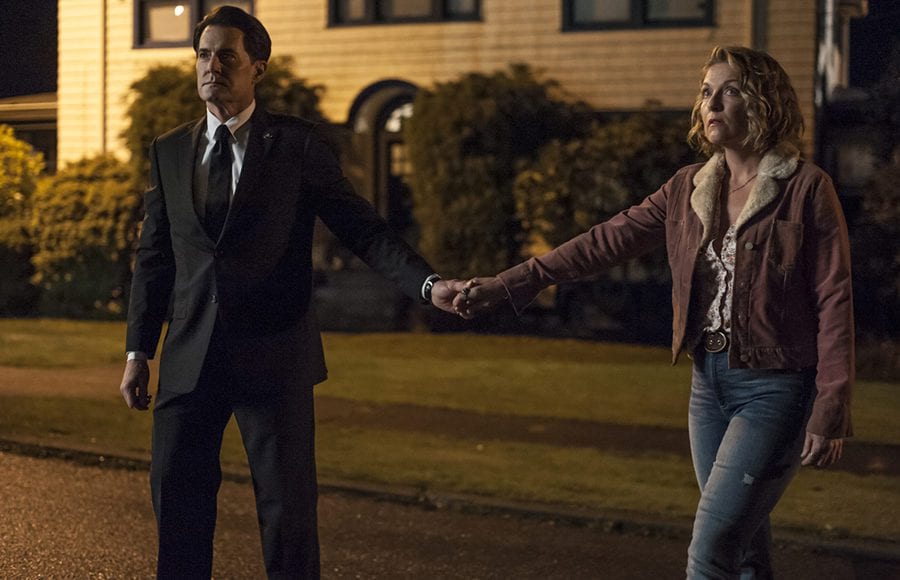 This was mistake number two. The entirety of The Return has been based around undermining expectations – playing with the images and scenes fans of the show had spent a quarter of a century fantasising about. Why should the finale be any different? This is a show that made us wait five hours to watch lovable, super-smart FBI agent Dale Cooper drink coffee, and in that moment turned him into a drooling manchild. It is a show that took fan sweetheart Audrey Horne and hid her for almost three quarters of the season. And when she was revealed, she was locked in a “Waiting for Godot”-style existential nightmare, taking place outside the reality of the show.

The last 18 hours of incredible television should have conditioned me to expect nothing, to wish for nothing and to simply accept what I saw in a mindful, non-judgemental, transcendental state. We never quite got what we imagined was coming – but that didn’t stop the show delivering in spades. The Zone, the Mitchums, evil Coop, Part 8, Kettle-Jeffries, the ballad of Becky and Steve, the Mauve rooms – there have been so many unforgettable plotlines, characters and images in The Return – but none of it was the wood-panelled donut-fest we conjured in our mind’s eye. There’s a part of me that believes Lynch and Frost were creating a Buddhist bootcamp in The Return, which places such emphasis on patience, on letting go of what went before and of what we imagine is to come. And yet still I was wanting, wishing, longing for a specific outcome. I should have known better – it was obvious if I listened to the lessons the show had taught.

For anyone looking for clean-cut resolution, this final episode is a nightmarish cat’s cradle of hanging threads. Where is Sarah Palmer? When and where are Carrie Page and Dale Cooper? What will become of the ultimate evil, Xiao De (Judy)? Where did Audrey wake up? What’s the deal with “the little girl who lived down the lane”? What happened to Becky? And who was Billy? There are loads more. Unanswered questions, dangling plots, characters without context – The Return left us with a truckload. We felt so tantalisingly close to resolving some of these mysteries, but the show is, as it always was, “filled with secrets”.

But I feel I should have seen that coming too. Why? Because Lynch and Frost have past form on this. How did they choose to end it all the last time Twin Peaks came to an end, 25 years ago? Did they serve us up a neatly wrapped bundle, tied off with a bow? No! They ended with the mother of all cliff-hangers, iced with several more, smaller cliff-hangers and garnished finally, with a liberal sprinkling of unfinished plots and unanswerable questions.

And that’s the exact same mysterious confection they served up here – a lack of completion that still somehow managed to be powerfully jarring and unexpected despite the fact that I should have seen it coming from miles away. We all should have. I believe this is entirely by design. The creators are masters of evoking mood – their show can flip nimbly from knockabout comedy to white-knuckle terror to heart-warming humanity without ever missing a beat. And so, if the ending sets us adrift in an ocean of intense anguish, frustration, bewilderment and confusion, it does so because that is the feeling Lynch and Frost chose to leave us with. And why would they choose to end like that? I think it’s because those feelings will last longer than the fleeting pleasure a neat resolution would bring. That charged, ecstatic frustration we’re feeling, that’s called ‘mystery’. And the mystery of this ending will keep our minds and emotions engaged for decades to come. 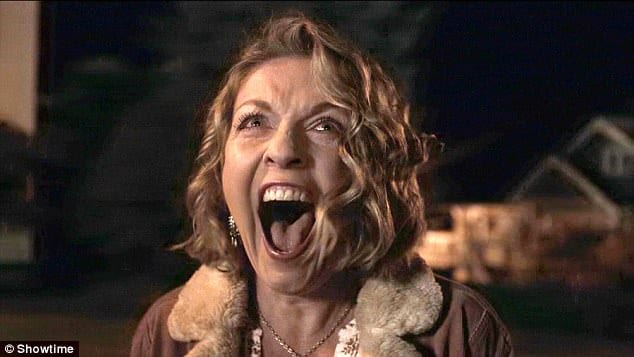 On top of the general air of ‘unfinished business’, there are also more specific parallels between the Season Two finale and the ending of The Return. When the original run ended with Dale Cooper replaced by an evil doppelganger, apparently possessed by BOB, we saw the forces for good had been outwitted at the last moment by the dark entities of the Lodge. And this, I think, is exactly what we’re seeing in Part 18. Once again, the Lodge inhabitants have got the drop on the good guys, planting their agents – the Chalfonts and Tremonds – in the Palmer house to confuse and confound the efforts of Cooper and Team Blue Rose. Our special agent has once again tried to take them on at their own game of tulpas, doubles, time-warps and dimensional gateways. He did so valiantly and manfully. But he has come up short a second time, unable to rid the world of Xiao De and her kin.

I wonder if Cooper, like myself, was too fixated on a single resolution, a single ending to this mystery. Was he blind to the signs, just as I was? Should he have been more transcendental, more mindful, more open? Would that have seen him through to a happier resolution? This certainly wasn’t the ending he expected. That much is clear. 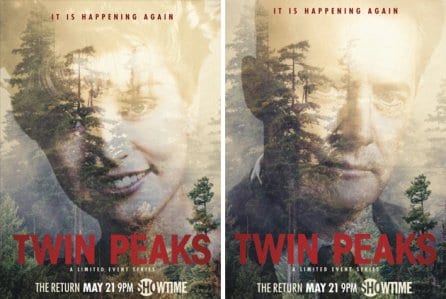 Nevertheless, Cooper should have seen it coming. I should have seen it coming. We all should have seen it coming. Heck, the Showtime posters for the show told us how this thing would end – “It is happening again”. And it did. It absolutely happened again. It had an impact unlike anything else on TV – again. It raised the bar – again. It changed everything – again. And it left us questioning, doubting, scrabbling to make sense of its mysteries – again. But still I didn’t see this ending coming. And I expect most of you reading this didn’t either. And that is perfect. We didn’t get the show we thought we wanted. But The Return has been staggeringly good, unlike anything that went before it – even Twin Peaks. We definitely didn’t get the ending we predicted or the one we thought we wanted – but we got one hell of an ending. It’s an ending that ensures people will still be discussing, theorising, unpicking and unpacking this incredible television series in 25 years’ time. Hopefully I’ll still be writing about it in 2042. Twin Peaks will live on – etched indelibly in our minds and our imaginations. And I think that’s exactly what Lynch and Frost would want. Twin Peaks began with a mystery at its heart and it has ended as a mystery in our hearts.

David Lynch has been quoted as saying “The more unknowable the mystery, the more beautiful it is”. Let’s savour this exquisitely beautiful, unknowable mystery like a velvety Bordeaux or a damn fine coffee, my friends. We will not see its like again any time soon. And that’s a prediction you can trust.